← Passage to Aitutaki and the Big Tuna Ciguatera poisoning in Aitutaki →

We have just visited yet another beautiful tropical island in the middle of nowhere. Leaving the French islands behind us we have now entered English speaking territory. Once again we ended up spending a lot of good times with fellow cruisers, having dinners and exploring the island together.

After a slow last 24h of sailing, we arrived at Aitutaki, Cook Islands, early in the morning of the 11th of October. We wanted to enter this narrow and shallow pass at high tide to have as much water as possible between our keels and the bottom, therefore we anchored outside in the lousy coral bottom for a few hours to get the tide right. This pass was a bit of a challenge, it was only about 15m wide (Kenobi is 7m) and according to the depth sounder only 1,4m deep at the lowest point, Kenobi drags 1,3m... We made it in to the little harbor and med-moored with a bow anchor in the front and the stern tied up to some palm trees on shore. The stern was about 5m from the shore but we set up a neat arrangement so we could pull the dinghy back and forth letting us have full access to land at all times. It is nice to be able to go do something on you own (like go running), when you are on anchor further out you always need to plan for how you use the one dinghy you have. 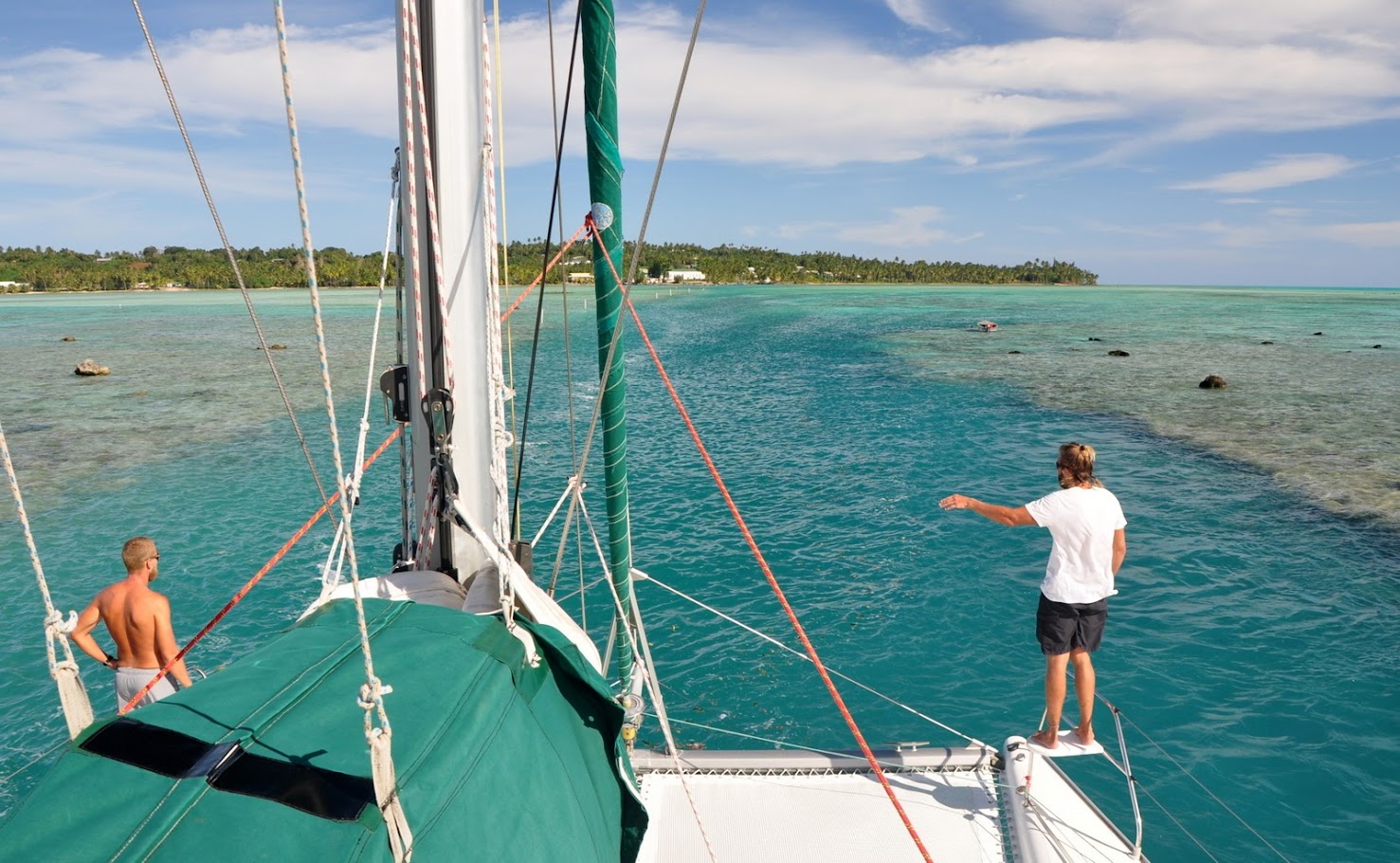 Tricky navigation in this narrow and shallow pass. 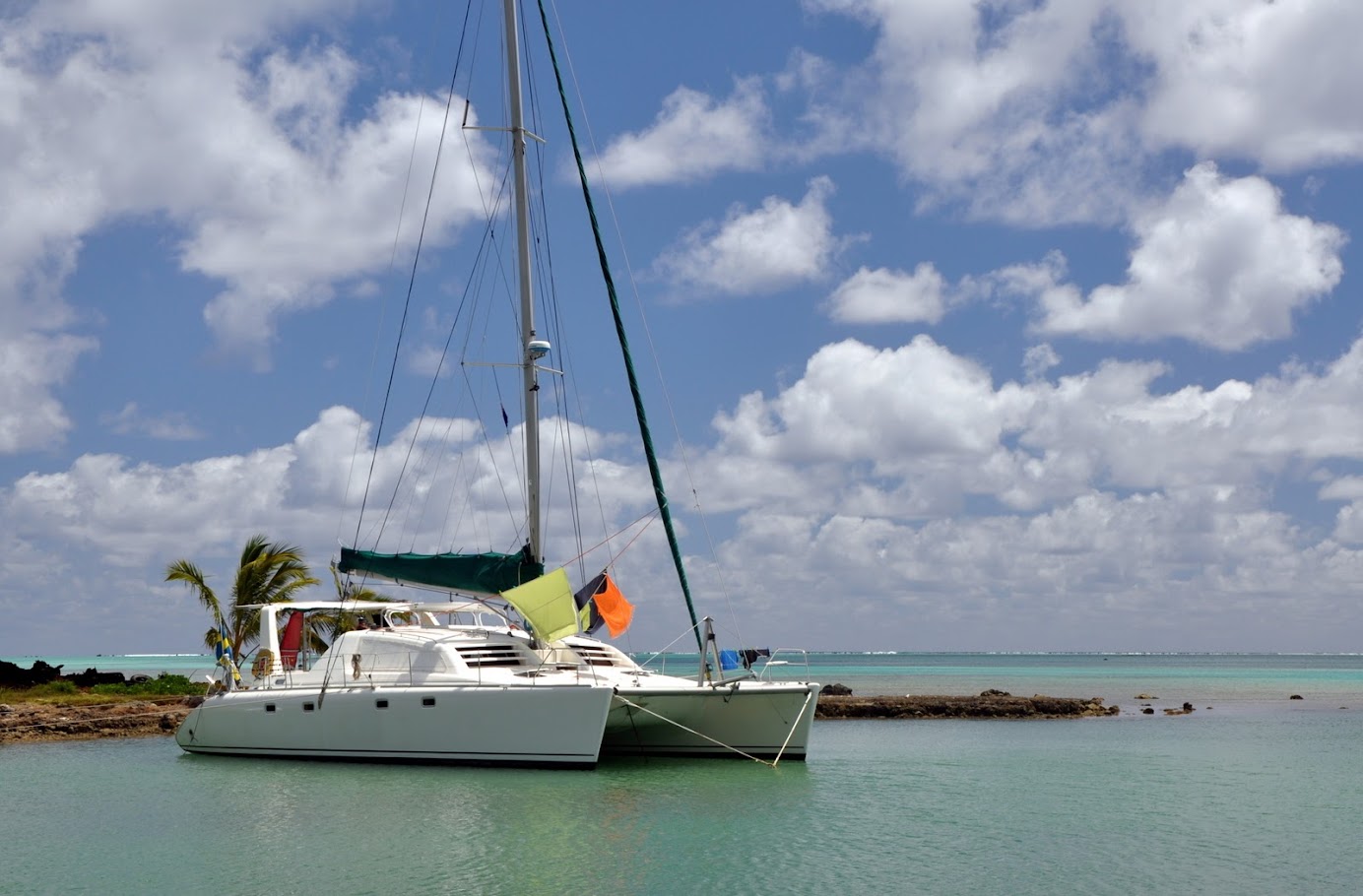 Kenobi safely tied up in the harbor. 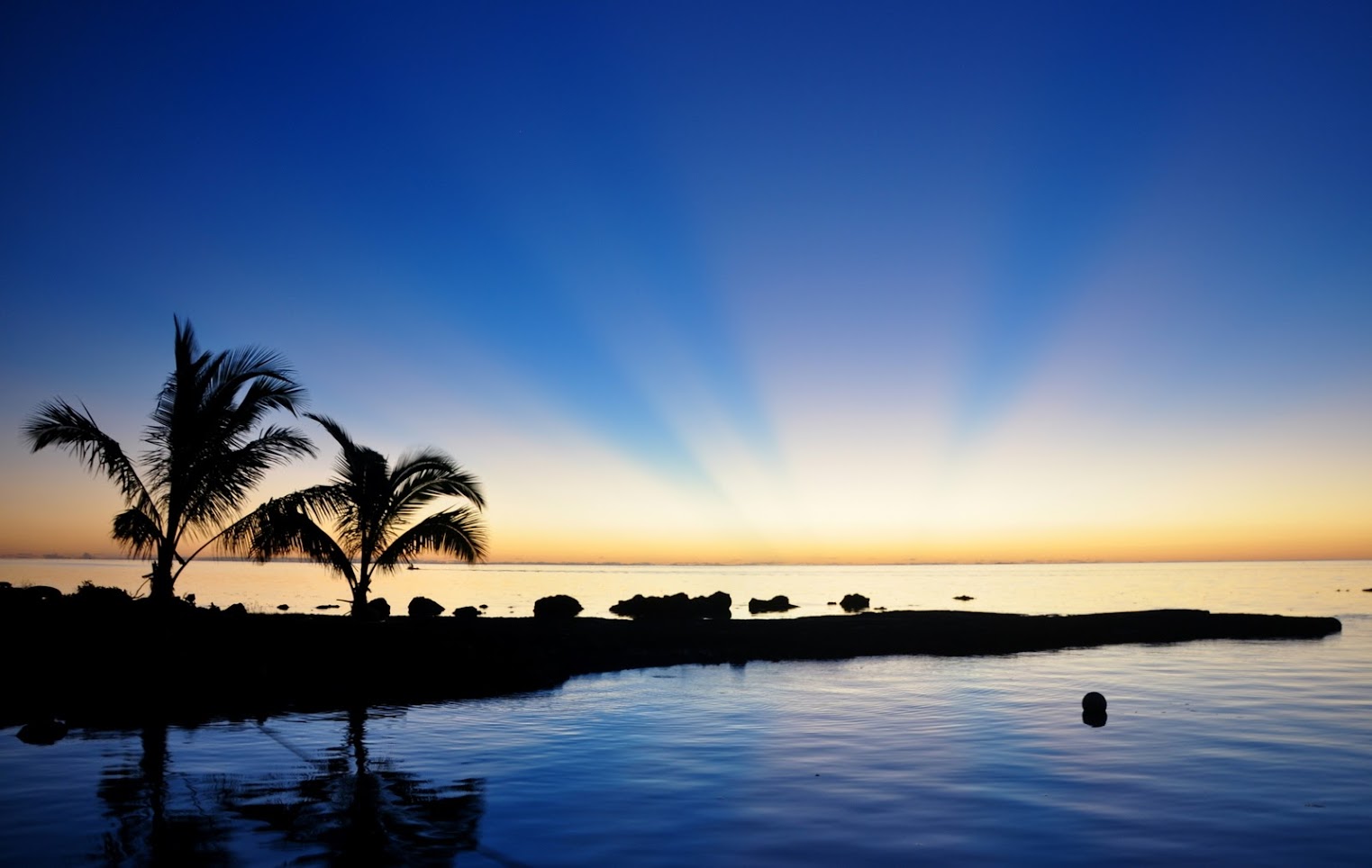 Sunset over the small harbor. If it wasn't for the palm trees one could think we were in the outer parts of the rocky archipelago of Stockholm...

Cook Islands consists of 15 islands spread out over a vast area between French Polynesia and the next major island groups, Tonga and Fiji. The islands are very spread out and many of them do not have good weather protection, therefore many cruiser visit only one or two islands on their way westward. This season only 25 sailboats had visited the beautiful lagoon of Aitutaki.

Aitutaki is on its way to becoming an atoll, this means the island is quite small and low and is surrounded by a large and shallow lagoon. You cannot sail in the lagoon and the only place to anchor is in the small harbor. We were the only sailing boat in the harbor now but sometimes it can be as many as eight squeezed in. The two other yachts here were anchored outside of the pass, they were too deep to get in. There are quite many tourists though visiting the two major resorts and the many smaller lodges and guest houses around. Even so, the vibe is quite genuine and the 1500 locals are all super friendly. Another great thing about this place is that everyone speaks English! So far on this trip we have only been in French and Spanish speaking countries (except 1 week in Dutch Bonaire), a lot of times struggling with the language. It was nice to be able to communicate easily with the locals. 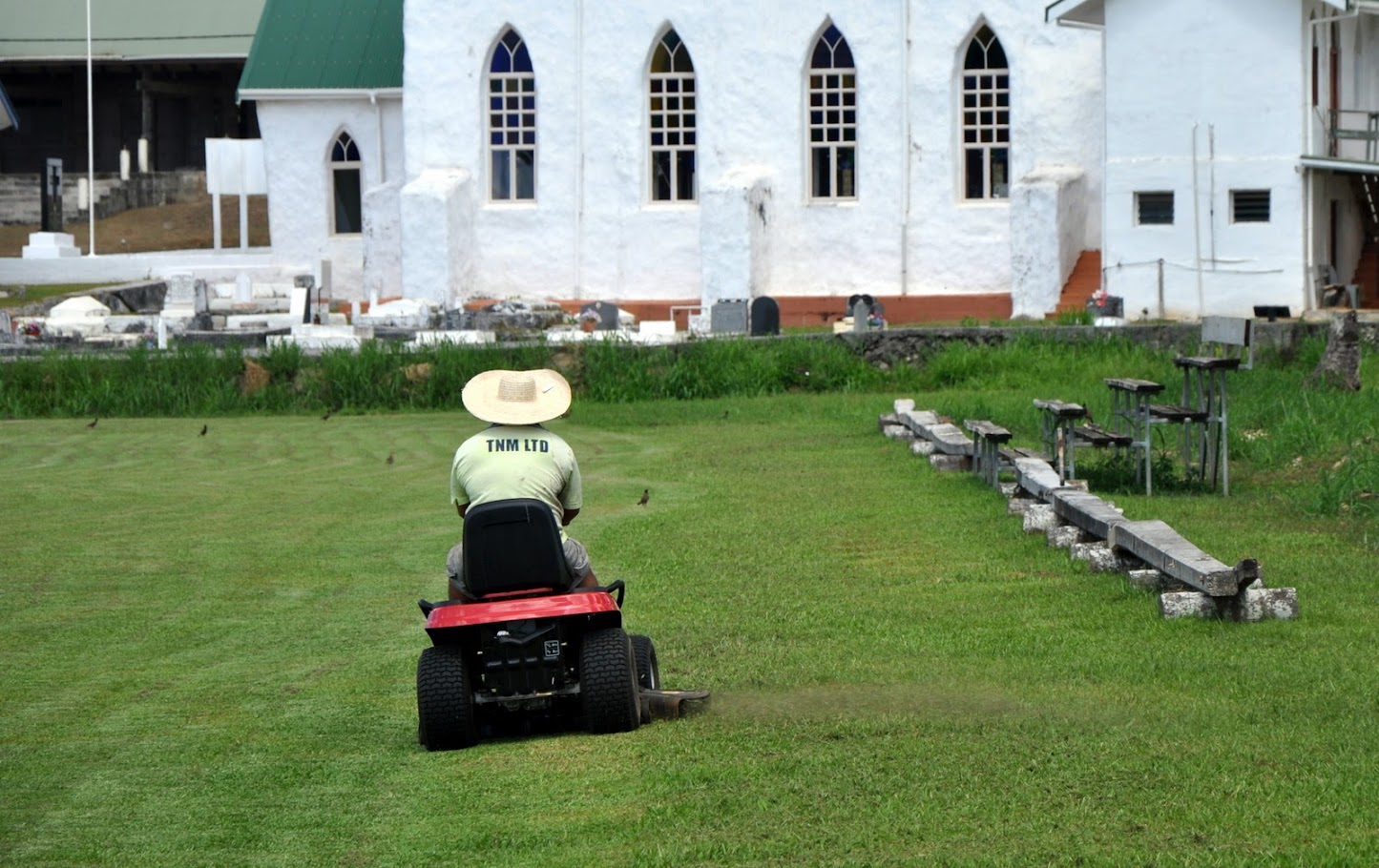 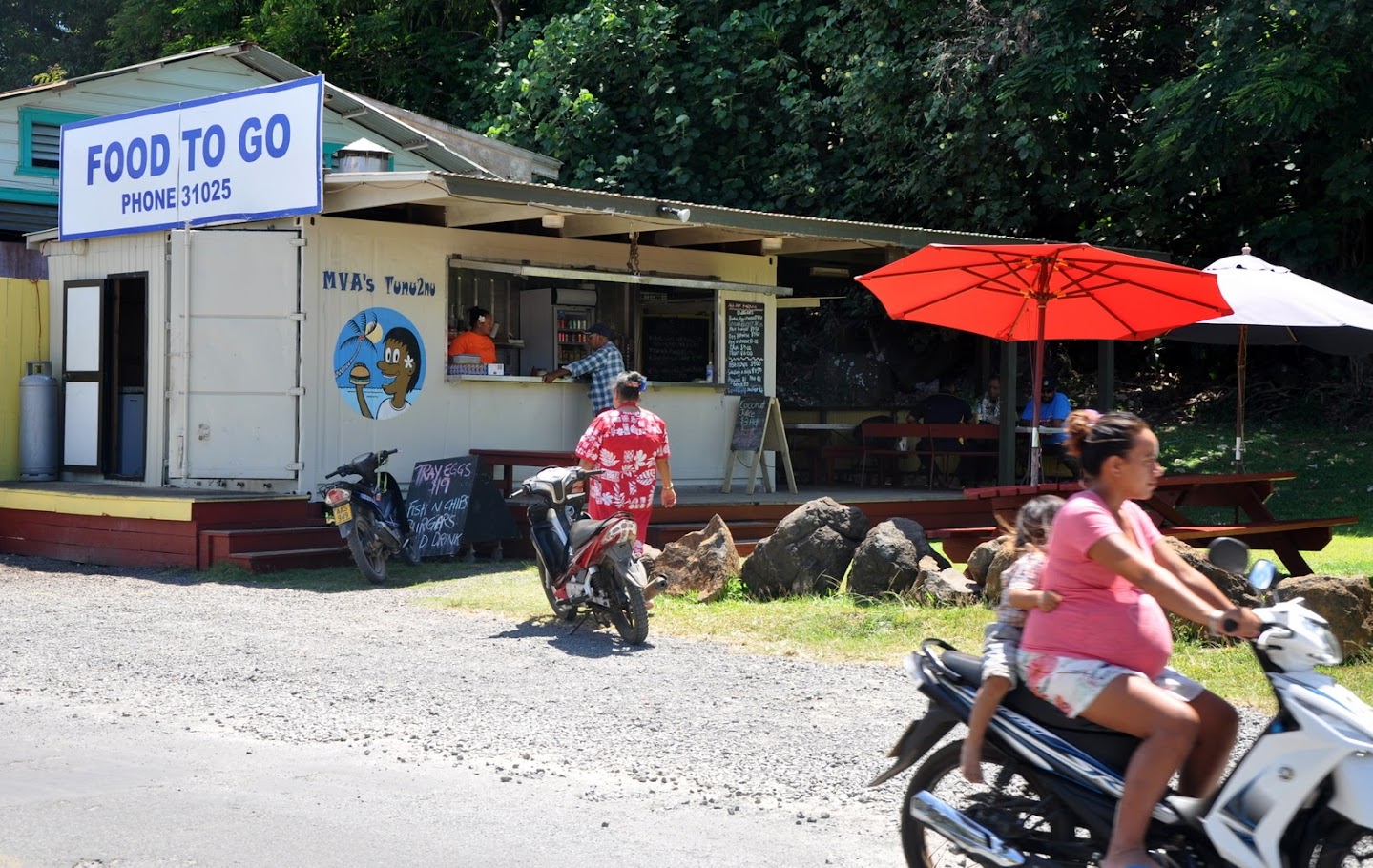 We were happy to see the yacht “Tangaroa” was anchored outside the pass. This is the boat of our new friend Jerome that we met in Bora Bora. The second boat in the anchorage was “One Love”, with a Kiwi guy and two French girls, who we had heard about before but never met. We had a lot of fresh tuna still in the fridge from the big catch on the way here so we invited everyone to dinner the second day on Kenobi. The others brought bread, freshly made pesto, homemade cookies and fruit salad, this turned into a real feast! We spent time together every day doing different things with these guys. Two dinners, a night out in town, spear gun session, lagoon trip and a pancake breakfast. 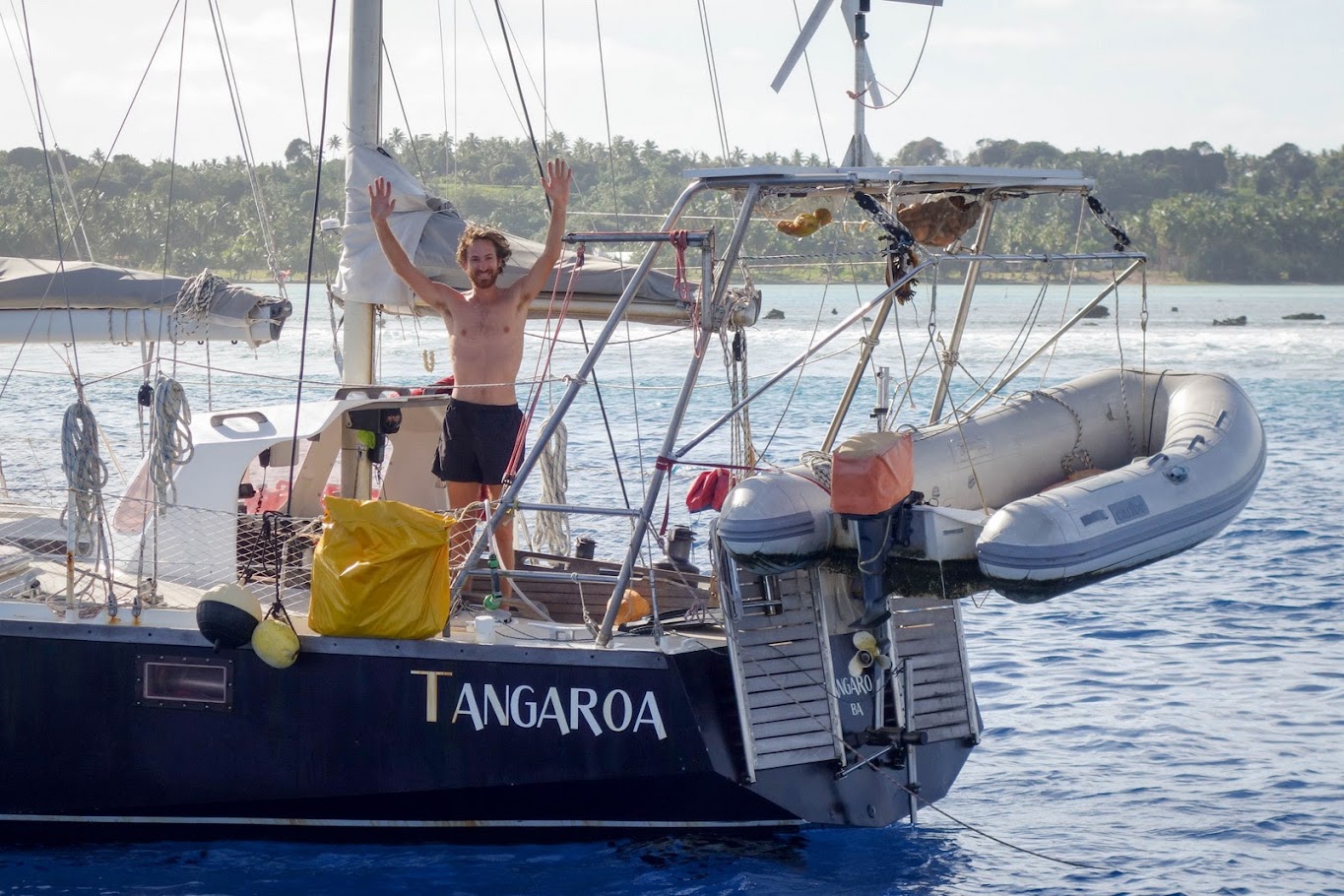 Jerome on his boat "Tangaroa". 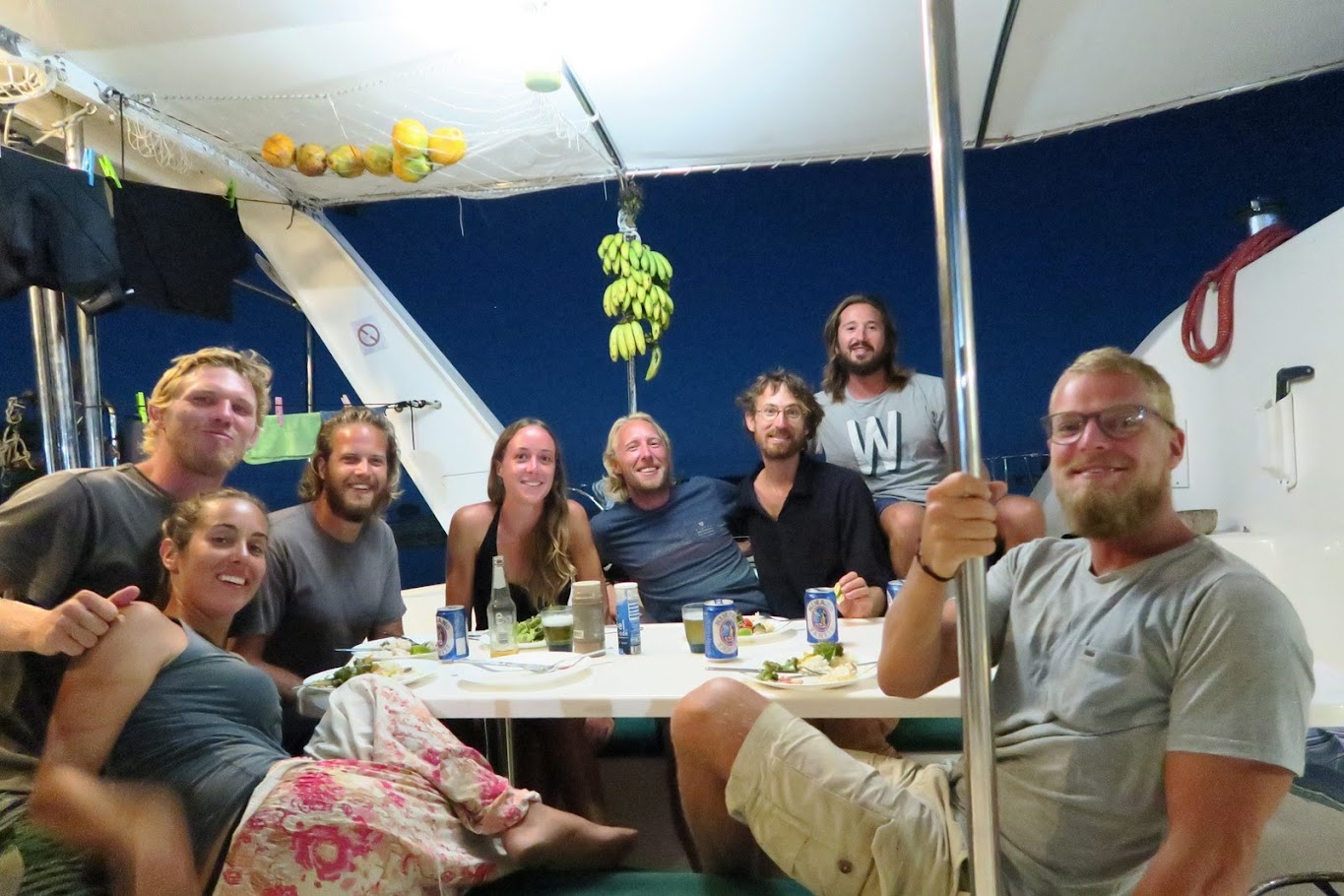 Great hanging out with these guys! Dean, Laura and Stephanie from "One love" and Jerome from "Tangaroa".

Day three was a busy day. We went for an island tour on our rented 110cc motorbikes, feeling like Kenobi MC. The wheels were rolling south, partly very slow on old tractor trails and partly fast on nice paved roads. The south side of the island is not very crowded ant there aren’t too much to see besides a few good lookouts over the lagoon. Though a cool area to ride bikes, it was a good feeling with the wind in your hair driving through this scenic landscape. Continuing north we eventually found our way to the main lookout at the highest point of the island, 124m above sea level. From here you had more or less a 360 degree view over the island and its surrounding lagoon, pretty beautiful view. At the top of the lookout point I realized that going uphill on a motor bike is much easier than going down… Me, Lukas and Johan had to carry my bike down the steepest parts while Simon put his bike on the side and slid down in total control of the situation Lukas and Johan were smart enough to leave there bikes at the bottom of the top hill. 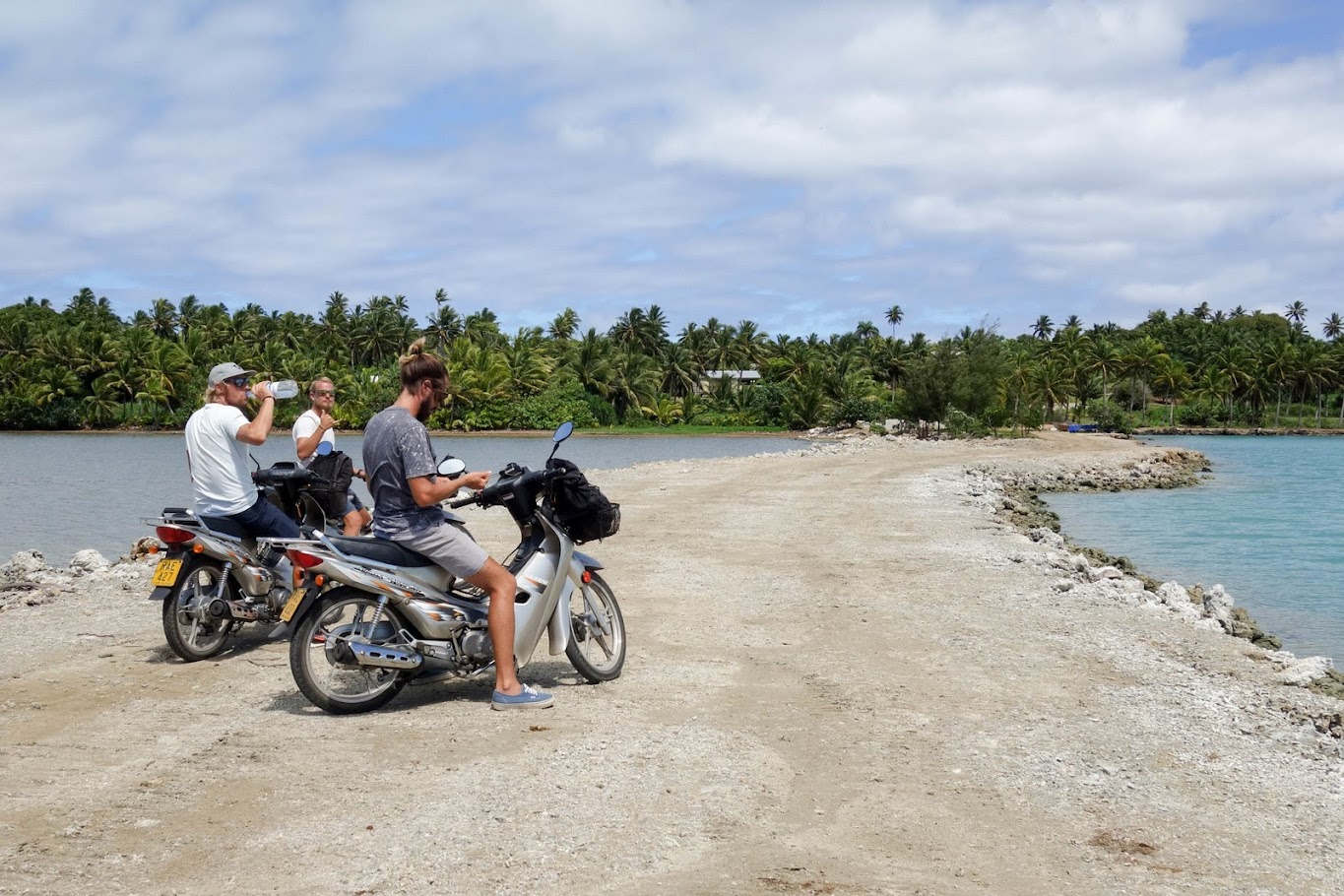 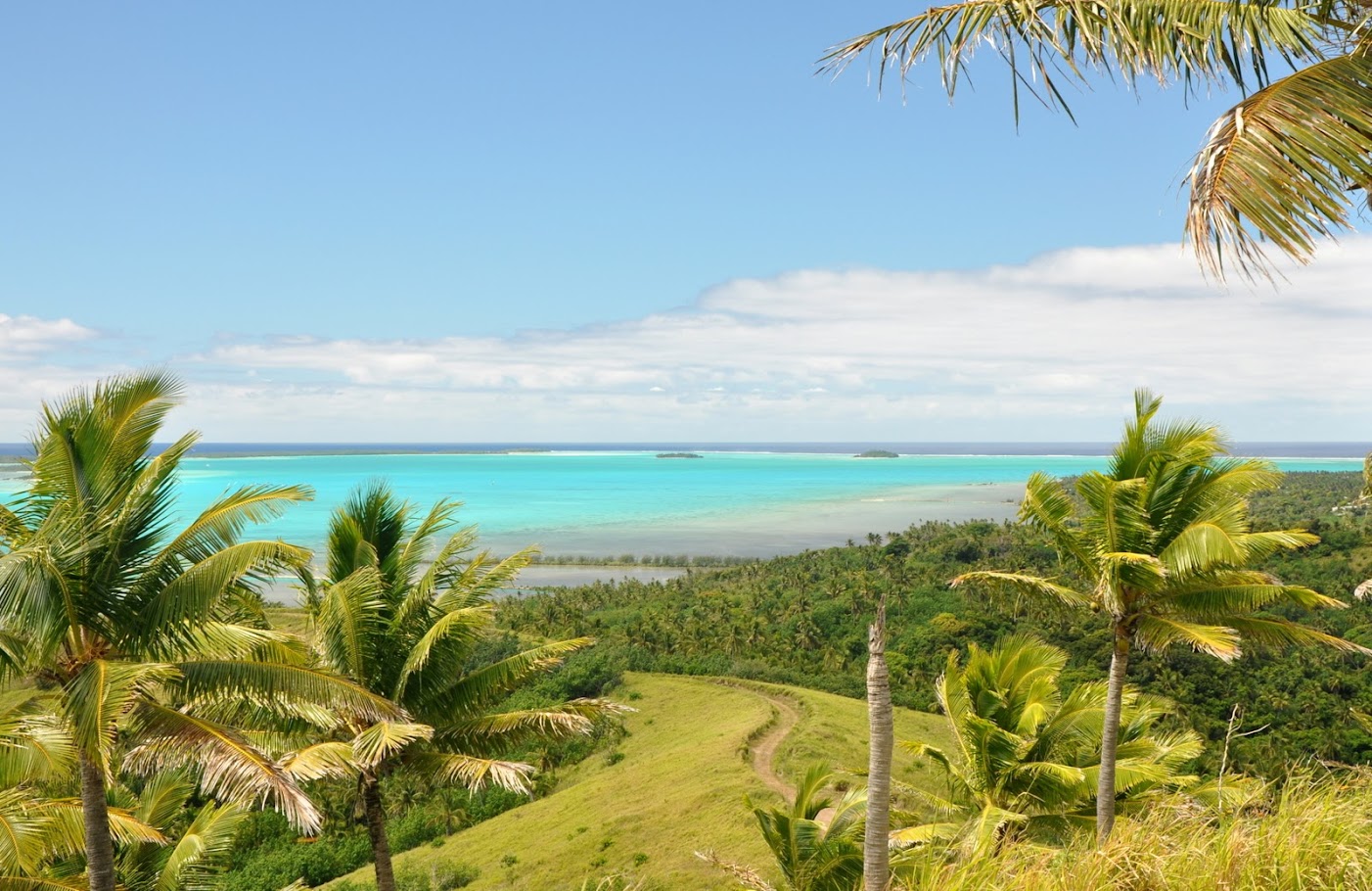 View from the lookout. 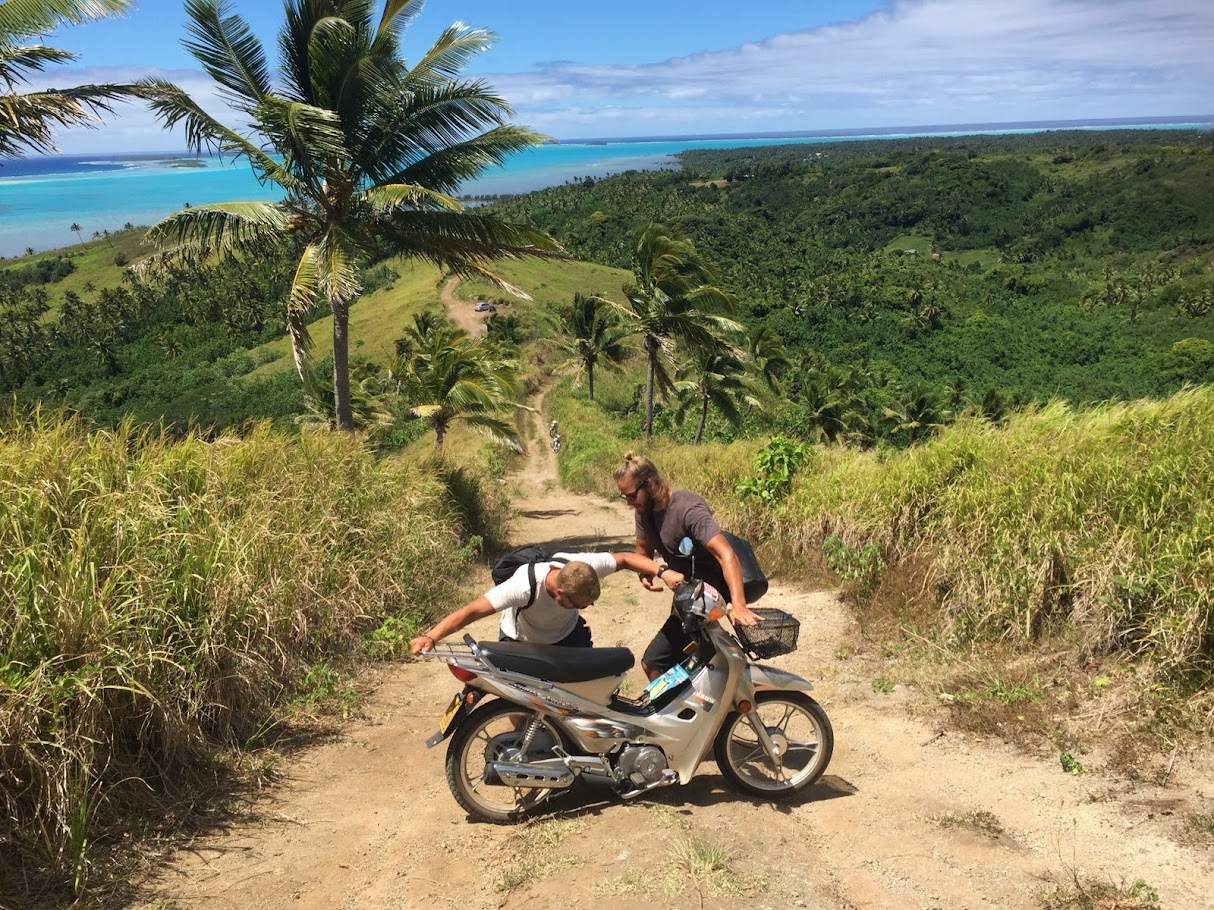 Draging my bike down a steep hill.

At the view point we met Hannah and Simon who were here for a wedding. Having a good time, we ended up spending most part of the day and evening together. We went to the eastern most part of the island where there is a private island resort and a big shallow water area where we went swimming and had lunch, an awesome place to spend the afternoon. During the later part of the afternoon the group were split up doing different things. Lukas, Simon and Johan continued the motorcycle sightseeing and Hampus went golfing as you can read about below. 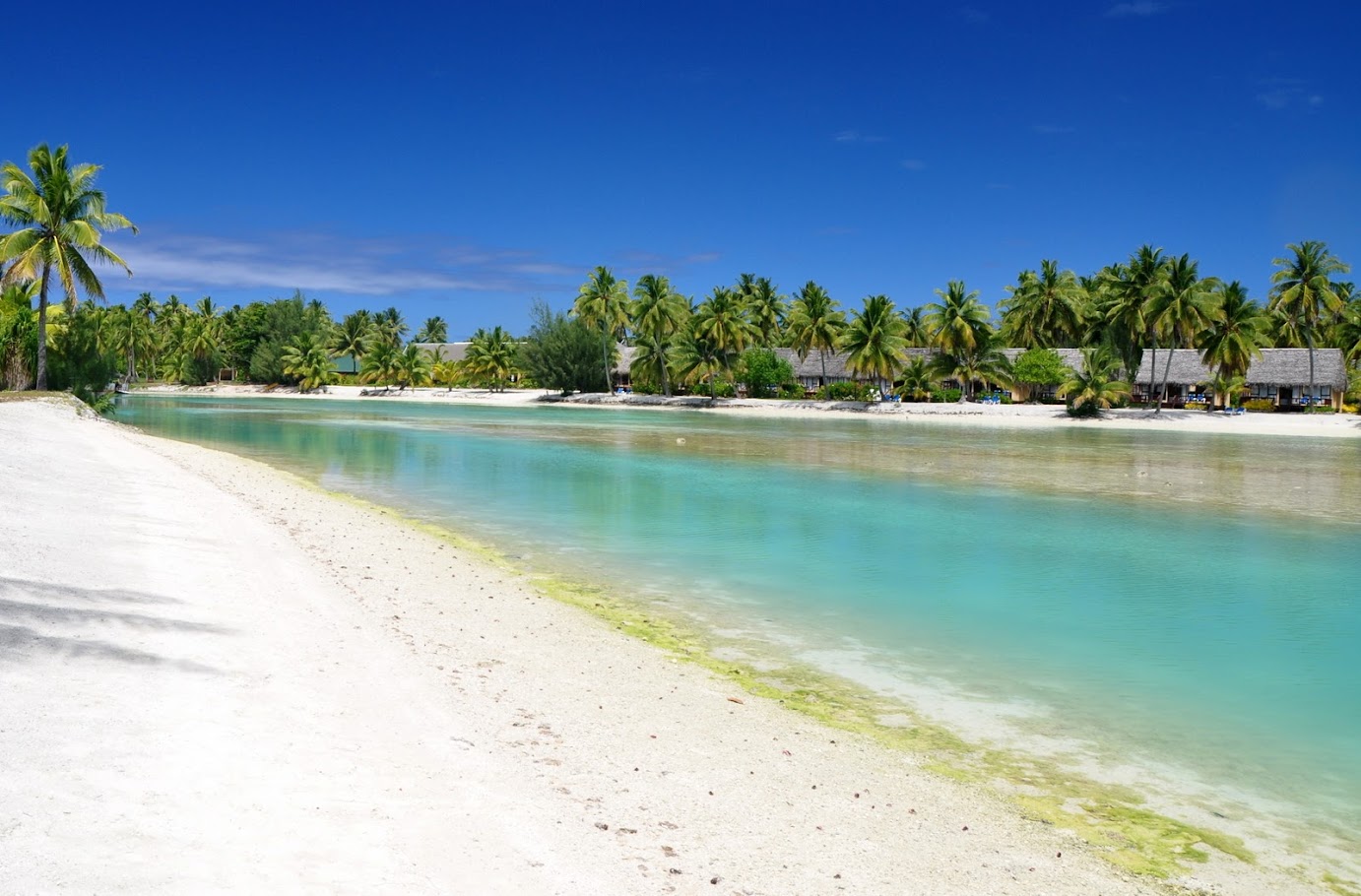 Beautiful channel to the private resort island on the south east side of the lagoon. 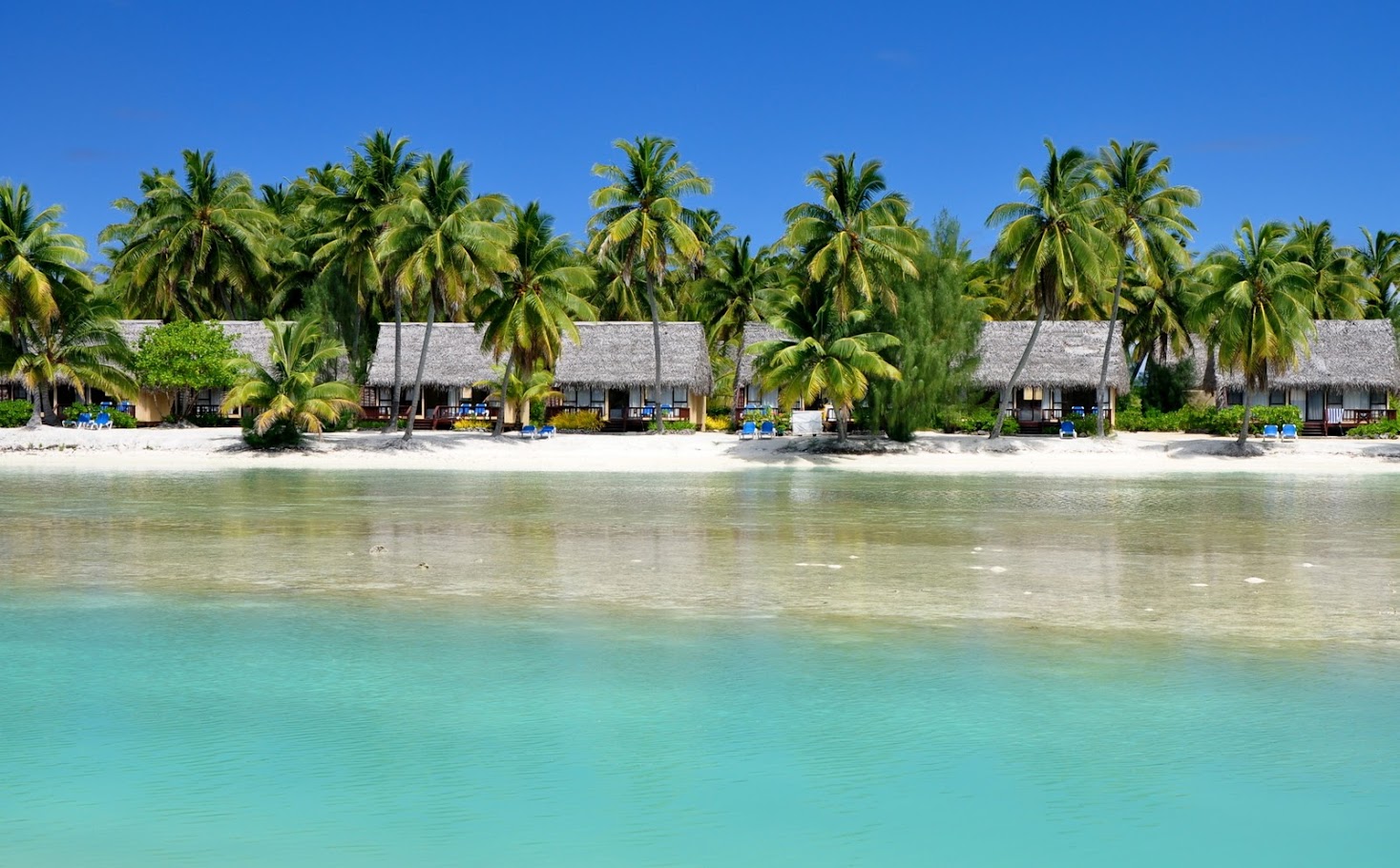 Bungalows starting at $300a night, just go for it! 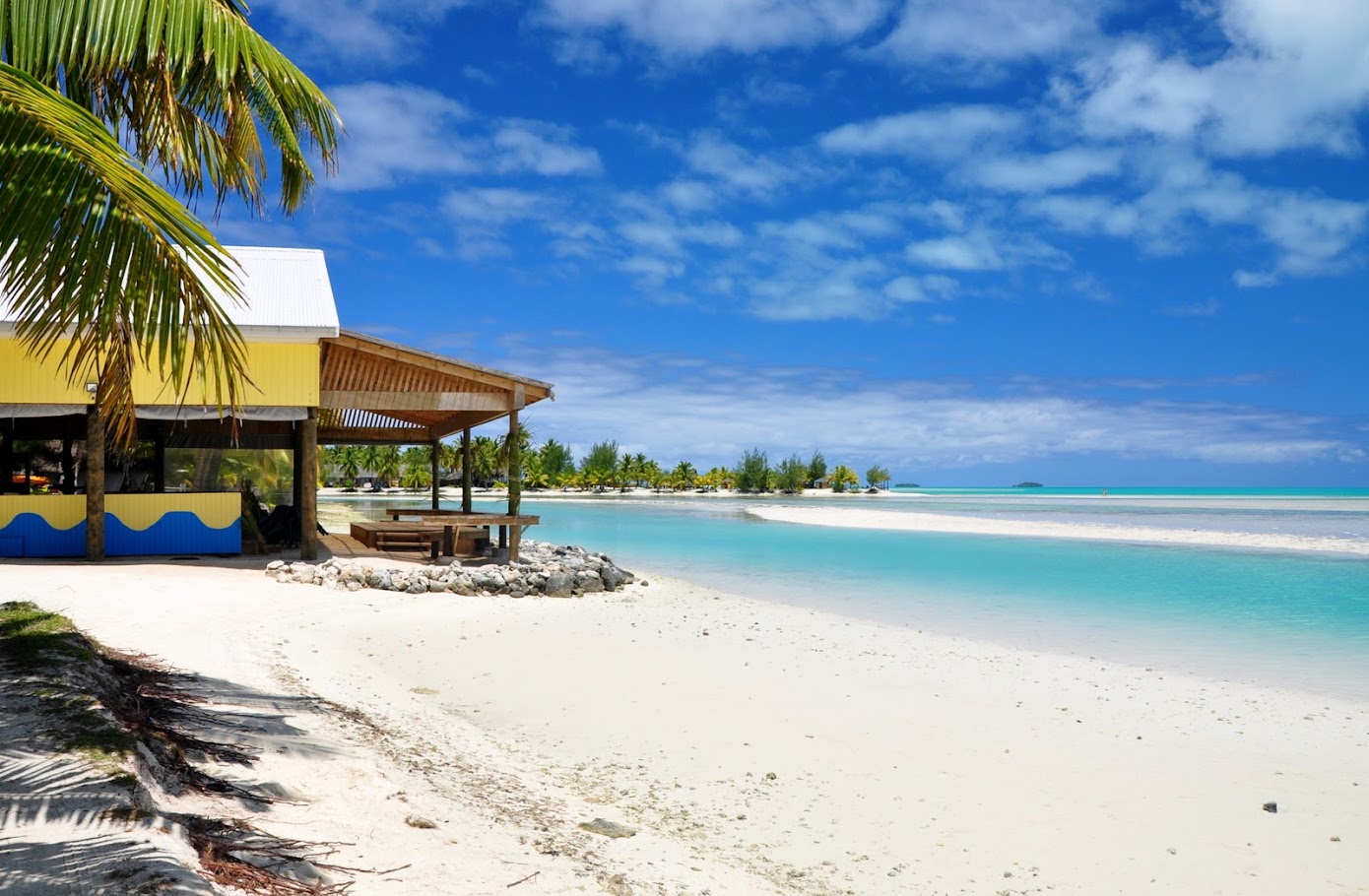 This is where we had lunch with Hannah and Simon. You'll have to imagine the group of people (no homo sapiens pics...)

I had read something about a golf course on Aitutaki before coming here. Having not played a single round this year I was a bit excited to see what could be arranged. I found the golf course just besides the airport on the northernmost part of the island. Expecting it to be an upscale resort type course, I was pleasantly surprised to find the small green hut style club house and a short 9-hole course. The president of the club, Ned, invited me to join their club competition later the same afternoon. No problem lending me his clubs and I only had to pay NZD 5 (= USD 4) for the green fee, people are incredibly friendly in this part of the world!

Being the only golf player on Kenobi, I went back for the competition by myself on my rented scooter. I was welcomed with two beers and a “this is how we play golf in the Cooks”, from Ned. There were only local people playing, a great way to get to know the people of the islands. I had a great round with Ned, his wife Greta (half Norwegian), Uncle Tiki and Joe, we don’t have to mention my score but my play was ok. My plan was to meet up with the other guys at a dance show that same night at 8pm but I had such a good time at the golf course I ended up staying there. Eventually I made my way down to the village slowly on my scooter. I met up the other guys at the local bar “the Fishing club” for a last drink. The Cook islanders are supposed to be the best dancers of the Pacific, apparently I missed out on a good dance show earlier that evening.

Long evening at the golf club 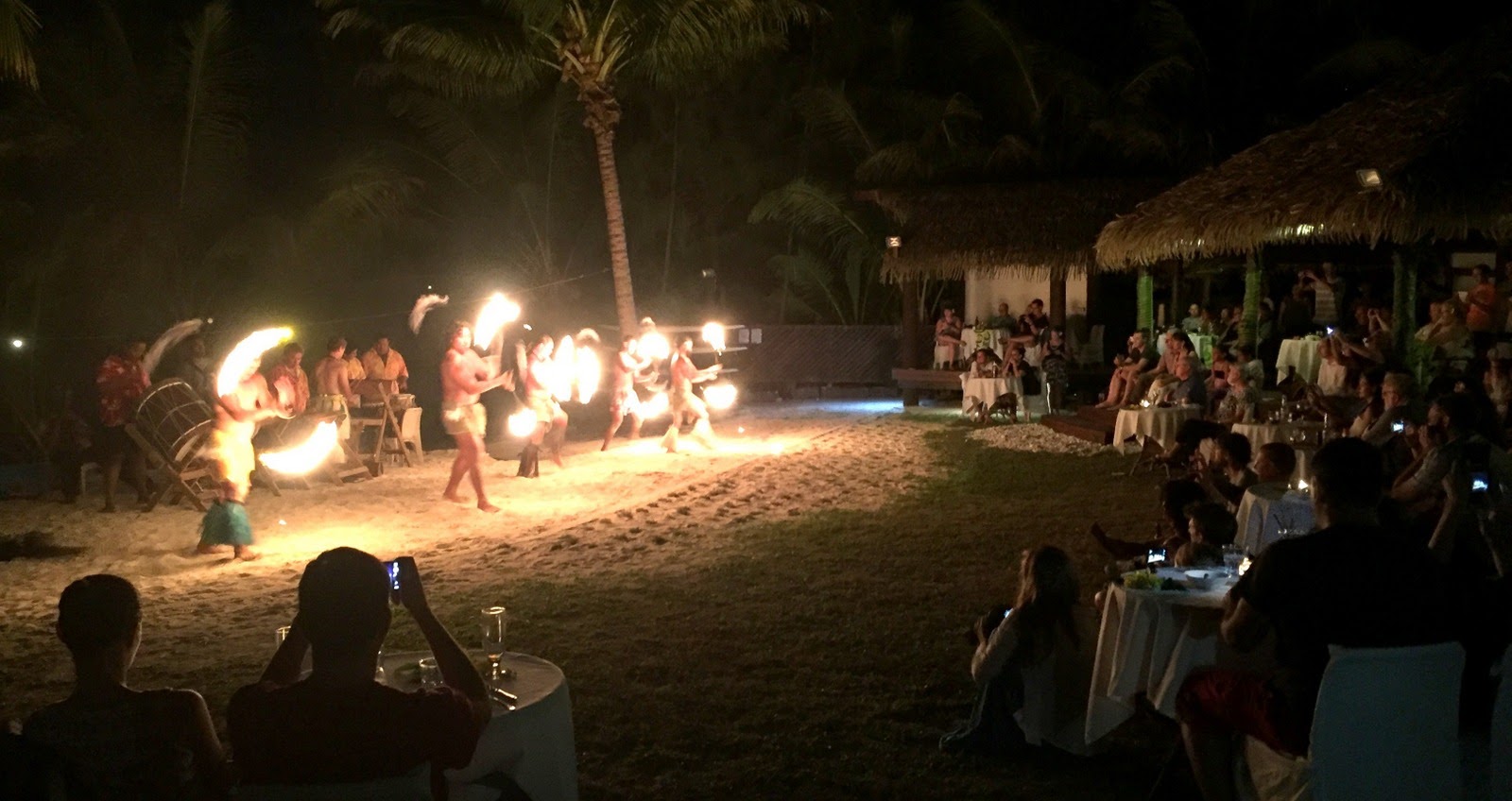 Dance show that the other guys visited.

As I mentioned earlier, we spent a lot of time together with the other boats. On day three some of us went spear fishing outside of the pass, of course we had to arrange a common “catch of the day” dinner the same evening. Because of the risk of “Ciguatera” we have learnt to always ask the local people before we eat reef fish from a new place. This time was no exception but during the following night and the next day some of us started feeling sick and showing symptoms of Ciguatera. Fortunately, none of us got any heavy effects so far, hopefully we’ll keep it that way. Also read Lukas’ separate post about Ciguatera on the blog. 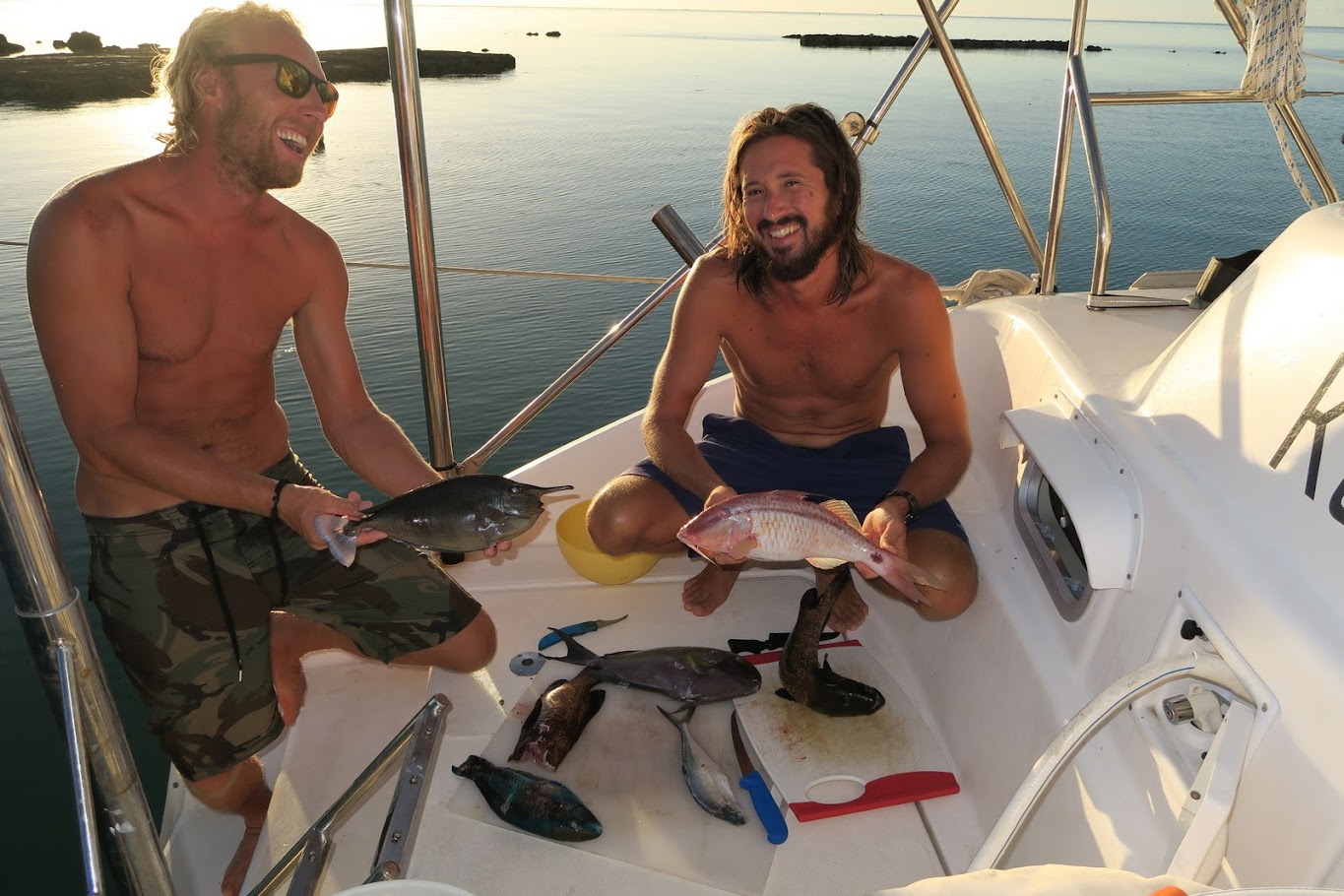 The catch of the day.

The day after still started in great way when the guys from “One love” came over organizing a pancake breakfast for us. Everybody relaxed and rested the last day at Aitutaki. Some of us had to recover from the ciguatera symptoms, others went discovering the lagoon in the dinghy. One part of the lagoon is full of giant clams, they can whey as much as 300kg, that’s huge! Some of them we found while snorkeling was at least 1,5 m wide. The clams are put here mainly as a tourist attraction but they are also part of a research study focused on the regeneration of clams. We brought lunch that we had at a really nice small motu called "Honeymoon island", conveniently we found some tables and chairs at the kite school camp... It is amazing how many of these small paradise like islands with white coral sand and palm trees we are visiting these days. 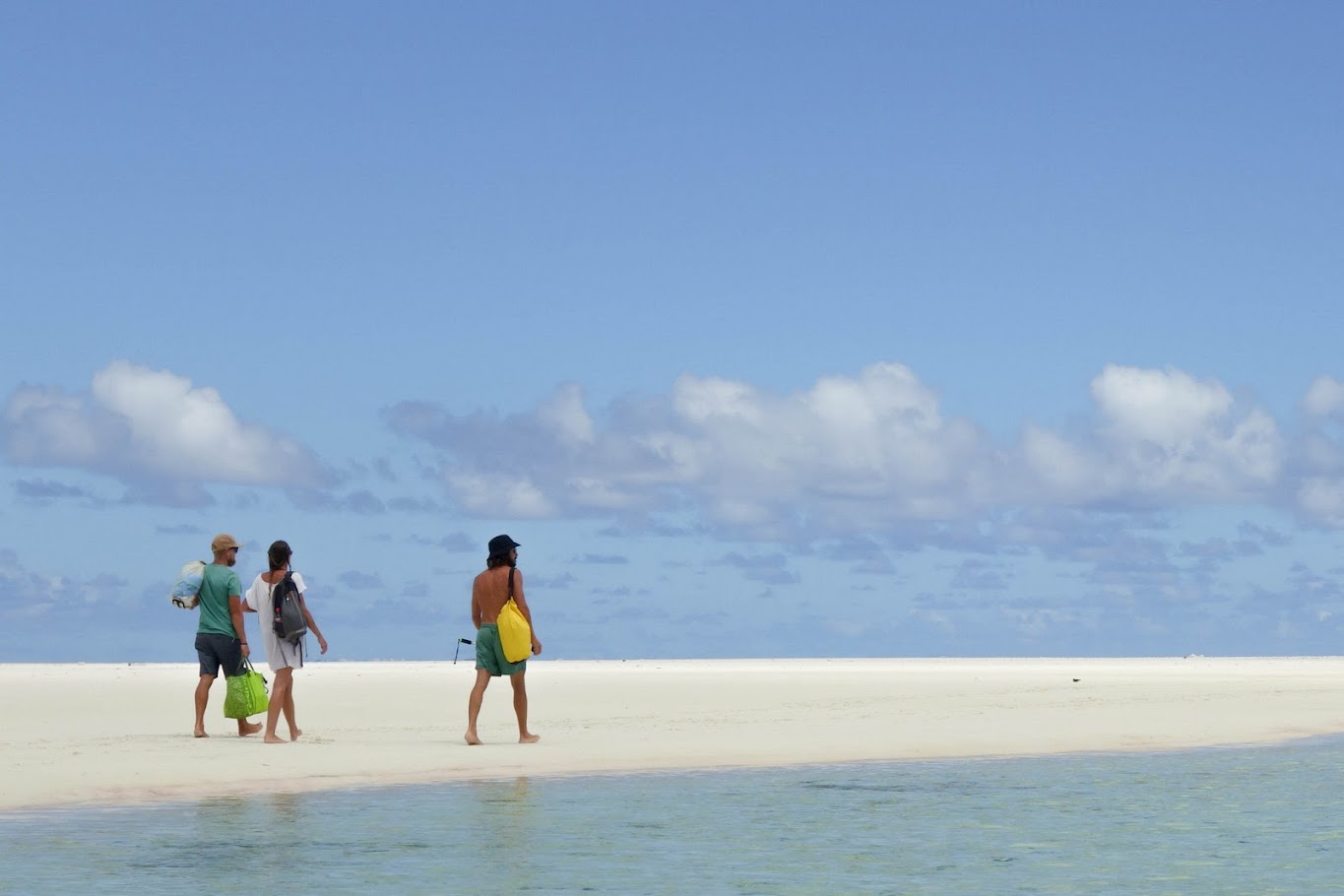 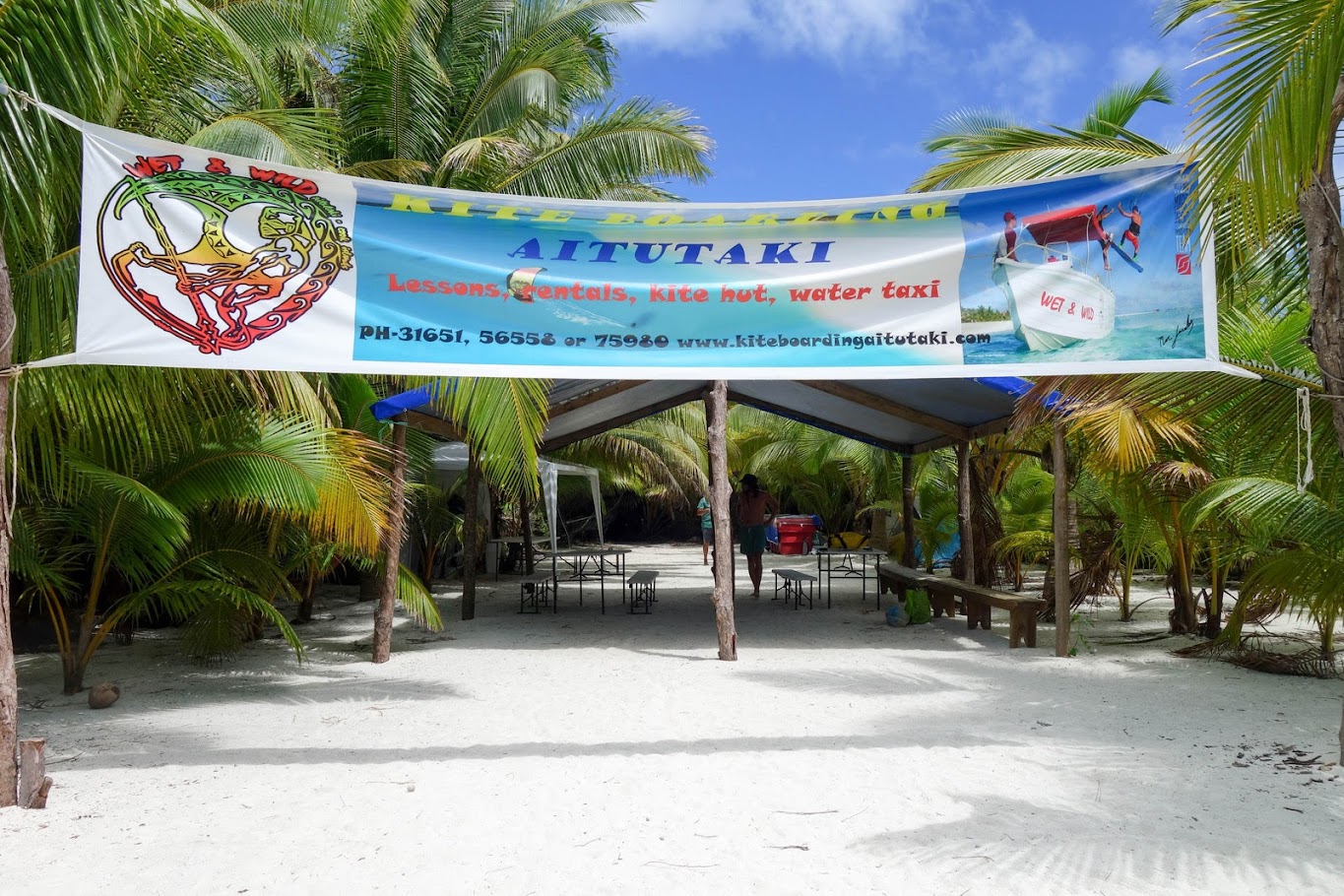 In the harbor we were approached by a lady called Metz Marsters, who wanted to know if we were going to stop at the island Palmerston about 200M to the west, and if we could bring some supplies to her family there. Apparently the supply ship had been delayed and the family were in need of a shipment. Palmerston was a place we wanted to visit but was about to give up on because of bad timing with weather windows on our westward route. This made us prioritize differently and we decided to squeeze in a stop there after all. We figured we couldn’t really say no to a request like that. Read more about Palmerston in an upcoming blog post. 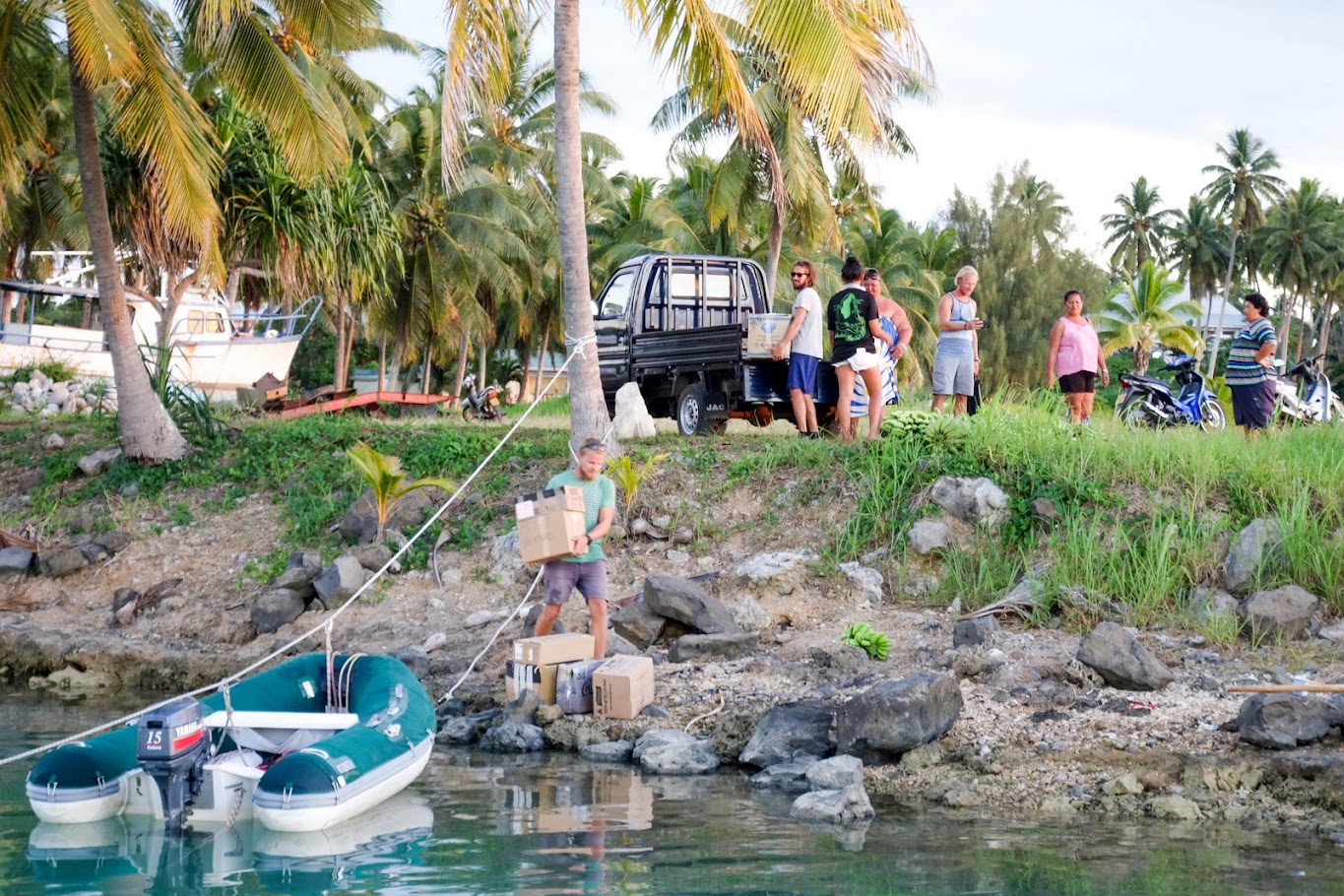 Loading the delivery for Palmerston, a few boxes and 15 branches of banana.

During our stay in Aituaki we kept a close eye on the weather forecast to decide the best time to continue sailing westward. The wind had been westerly (= headwind) the last couple of days caused by a deep low further down south from here. During the weekend the reports said the wind was turning east again during late Sunday and Monday. We decided to leave Sunday during high tide to set sails for Palmerston atoll. Last thing we did before departing was to go see the famous Sunday church mass, apparently the Cook islanders are both great dancers and great singers. I am not a very religious person but the singing was really something and the atmosphere quite different from my church experiences back home.