On Wednesday the 23rd of march we left the bay of Cumberland in St Vincent, where we had spent the previous two nights, and headed south for Wallilabou to clear out of the country at the customs office. Wallilabou is a strange place, it is a small bay which has become a popular place to visit since they recorded many scenes for the movies of “Pirates of the Caribbean” here. There are still a lot of movie props around, cannons, barrels etc but to be honest we were not that impressed. We were happy to find a restaurant where we could get a nice meal and some WiFi before heading out to sea for our first long haul leg.
Next stop for Kenobi and crew would be the island of Bonaire (part of the Dutch Antilles north of Venezuela) about 420 nautical miles away if you can keep a steady 263 degrees on the compass all the way. In the continuous easterly trade winds it is a nice leg. Though, with a catamaran you cannot go straight down wind and we knew we would have to gybe our way over there or hope for the wind to turn slightly to either south or north to catch a better angle on the wind. The leg took us exactly 71 hours to complete and we entered the town of Kralendijk from the south in 30 knot winds and 10 knots of speed on the GPS late afternoon on the 26th of March. 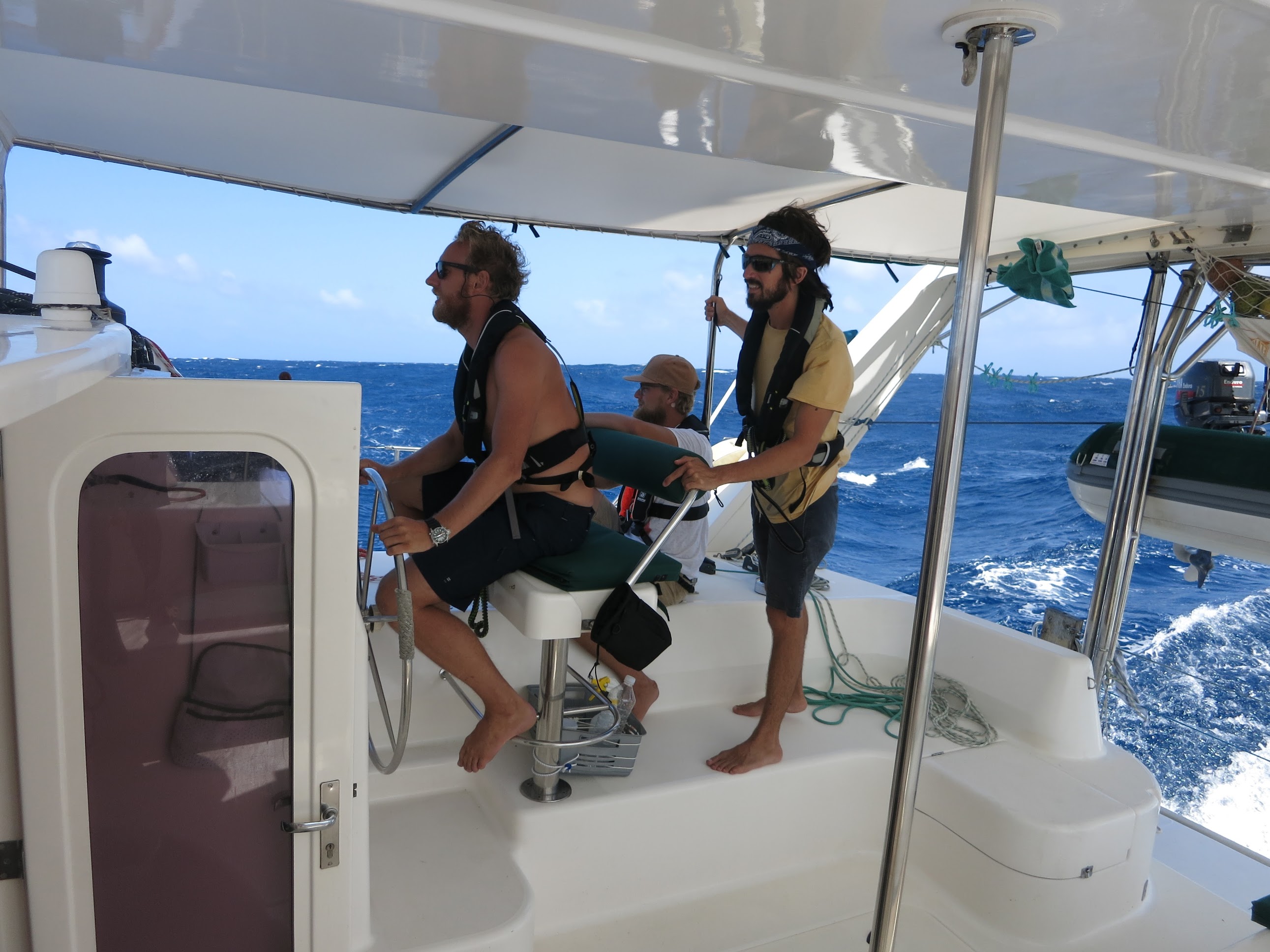 For three of the crew members it was the first offshore sailing experience, with around the clock sailing and no land in sight for days. We were lucky to time our departure with a full moon which made the night skies a lot brighter. The first day and a half we had 15-20 knots easterly winds and moderate waves, the conditions were pretty calm and all the crew got comfortable with the situation. First night we were two people awake all the time for safety but the following nights we did solo shifts and everyone could get some well needed sleep. Of course Captain Lukas had to sleep with one eye open all the time to look after his crew. Even though the conditions were “calm” the boat is still moving a lot up and down and sideways in the 2-3 meter waves, to go to the bathroom or to cook a meal is a bit of a struggle!
The last night and day the conditions became a bit more exciting with winds increasing and waves probably 4 meters high from time to time. Some of the crew (at least Hampus) did not get too much sleep that last night, all the noise from waves banging against the hulls and you being pushed back and forth in bed gave you a hard time. At least no one got sea sick on this leg!
/Hampus

This was also the all-important fishing premiere of the trip. Our three Penn Senator stand-up rod and reel combos are rigged and we have a lot of new lures and equipment (will do a special blog page on fishing and gear etc later). On the morning day 1 we put two rods in at 6am, at 7 we got a double bite! Our plan for handling fighting the fish at sea is to furl the genoa, sheet in the main and go upwind to have to boat come too a stop. This worked great even if it was a bit slow - we will get quicker. The big fish almost emptied the 500m reel and it was a lot of winding to get it back. Kenobi proved to be an awesome fishing platform, stable in the sea and the big aft deck is great when fighting landing the fish. Alcohol in the gills kills it quick and then we sat there in the back and gutted and cleaned it. Two nice dorados, the biggest was 127cm, maybe around 10kg (have now bought a scale so will be more accurate in the future). It’s the biggest dorado I ever caught so a really nice start of the Kenobi fishing! We ate sashimi, fillet steaks, thai green curry dorado, dorado cevice - it’s a delicious fish that we hope to catch more of. Even tried saying and drying some strips of it, turned out pretty good. Will do some more experimenting with this. The last day another smaller dorado was caught so we even had fresh fish lying at anchor - luxury!
/Lukas 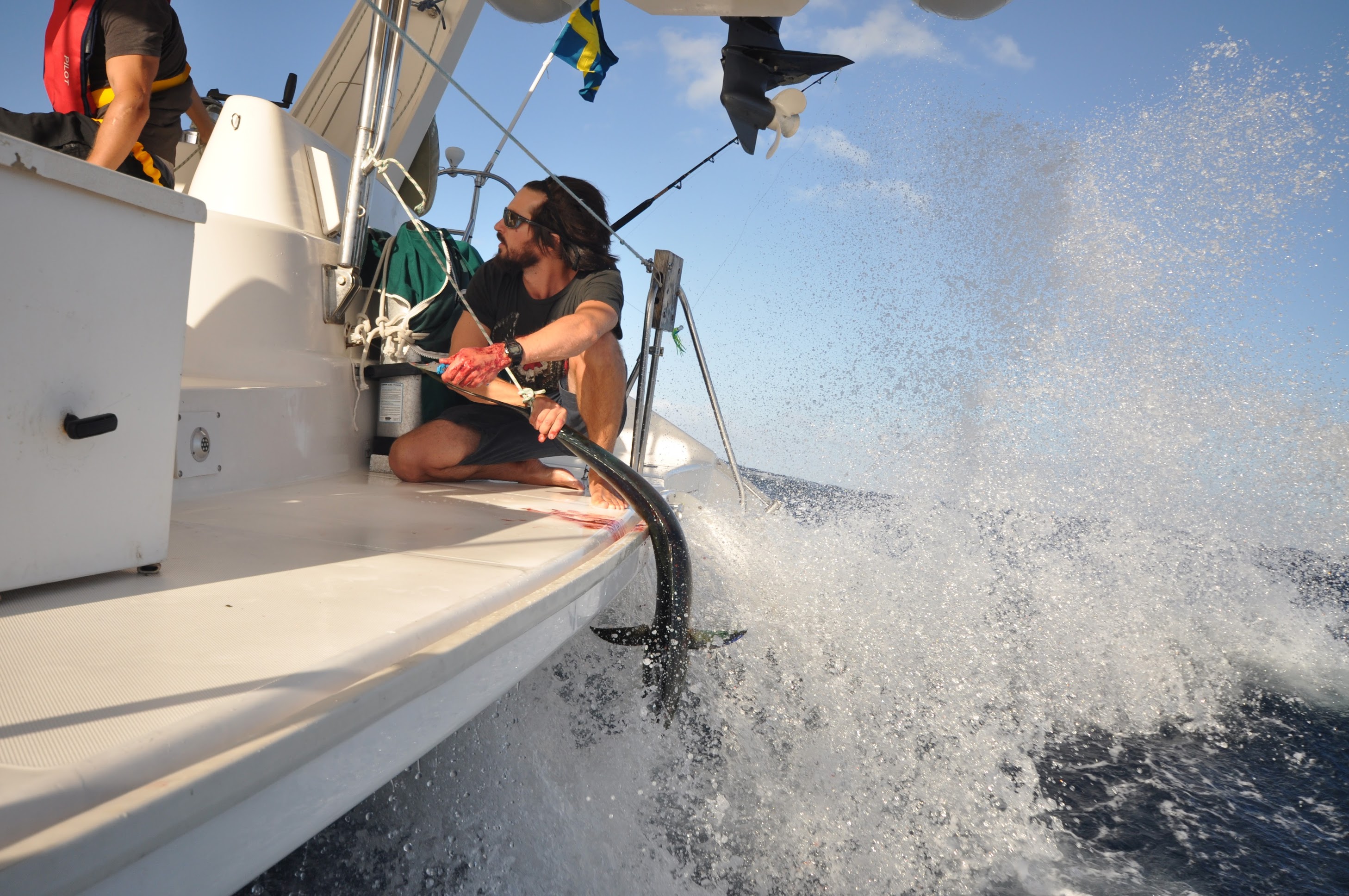 Cleaning a gutted dorado using the wake of the boat

The final stretch towards Bonaire was awesome sailing. We were in the lee of the island so no waves but the island is flat so we had 25kn wind, gusting to 30 and made 10kn speed all the way into town, steering clear of the kitesurfers that were far off shore. We took a mooring buoy outside the city Kralendijk. One of the best moorings I’ve been at - calm sea, dive shop and town 50m away on the shore and a beautiful coral reef right under the boat! 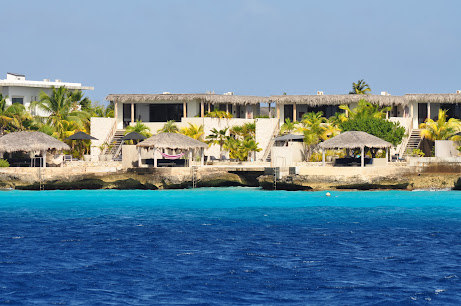 Resorts that we passed coming into the island

The village is very clean, picturesque and laid back. A lot of focus on touristy stuff (the big cruise ships stop here a lot) but also a nice local feel and friendly helpful people everywhere. Bonaire is a dutch island so most of the locals you meet around town are dutch. We hadn’t thought much about this before coming here so it was a nice surprise to find salty liquorice (we have realised that during the night shifts sugar is needed). Also found our favourite bread - knäckebröd, in the shop. Hope it keeps crisp on the boat.

As usual some stuff to fix, most urgent was a leak in the escape hatch in the saloon floor. The rivet for one of the door hinges had came out and the hatch didn’t seal property. Luckily we have Simon on board who knows about this stuff. Also met an expat swede here on the island, Lelle, who has his own boat yard. He was on a sailing trip around the world but ended up staying here. Really nice guy and he lent us some tools and a couple screws that we needed, in exchange we gave him a bottle from our french wine stash from Martinique.

All the kitesurfing and diving going on here made us stay a couple days longer than we had planned. Me and Johan got our PADI dive certificates ReActivated (involves answering 20 questions online and paying $60 to PADI) and then got to rent equipment to go dive on our own. We loaded up the dinghy and went on a real bumpy ride over to Klein Bonaire and made a dive at Carls’ Wall on the north west side. It was a good dive, clear water, nice coral wall with fish all around. It was cool to be able to go diving on your own with the dinghy. Looking forward to dives in Galapagos and French Polynesia, hopefully by then the rest of the crew will have certificates as well. 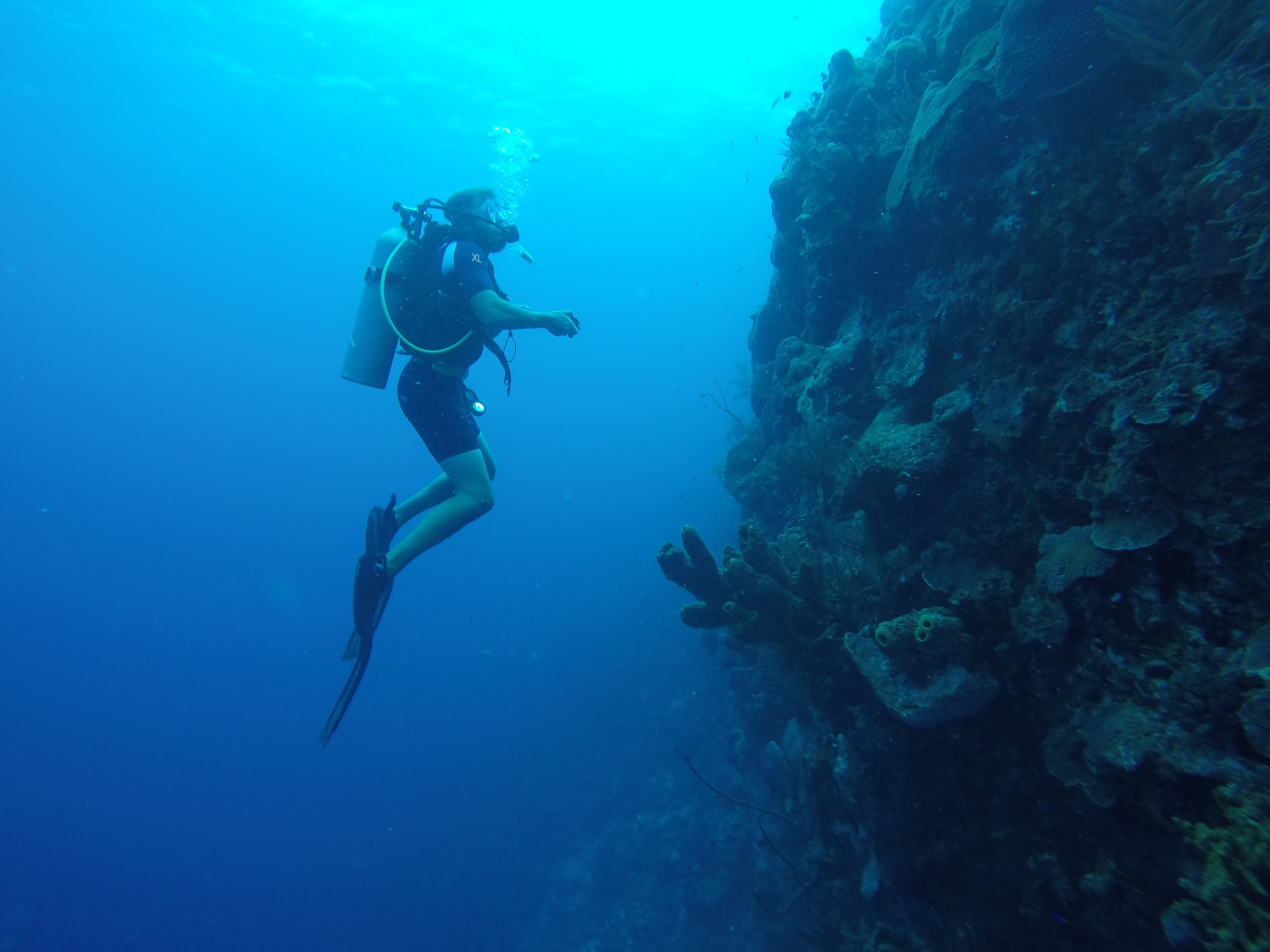 We also tried kitesurfing! Not so much surfing yet but the first stages of learning means practice controlling the kite and “body drag”. I also practiced a lot “body flight and crash” - really fun too! We even bought a second used kite from the kite school so now we have a 10 and a 12 to keep practicing with. Atoll kiting here we come.

All in all we had a great time here and would definitely like to come back in the future for more kiting and diving. Now we’re going for a last hunt around town to stock up on liquorice (many kilos are needed) and then we set sail towards Carthagena. It looks like it will be an exciting crossing. Wind around 25n, gusting above 30. Waves 2.3m. Luckily all of it is going west so these 500M won’t be too long. In Carthagena we have contacted a shipyard for haul out (only found one that can take a 45ft cat). Then it’s back to focus-mode: we’re gonna do a new bottom paint and maybe giving Kenobi some new colours. Stay tuned.
/Lukas & co