Having to leave Tahanea the way we did was a hard blow. For me, that island had something really magical about it. Snorkelling around fish that were completely unafraid, drift dives over pristine coral in the passes. All by ourselves and nobody there but us. Anywhere you looked there was only nature, as beautiful as it can be. Focus became the birds, the fishes, the sharks.

Anchoring up in Fakarava was different. We didn’t even have to drop anchor, a mooring buoy was available and we tied up right outside the Top Dive dive shop. The area was far from crowded but there were a dozen other boats spread out around us and focus looking out from “home” was once again other people and boats, cruisers and tourists staying in resorts out on day trips zipping around in motor boats. 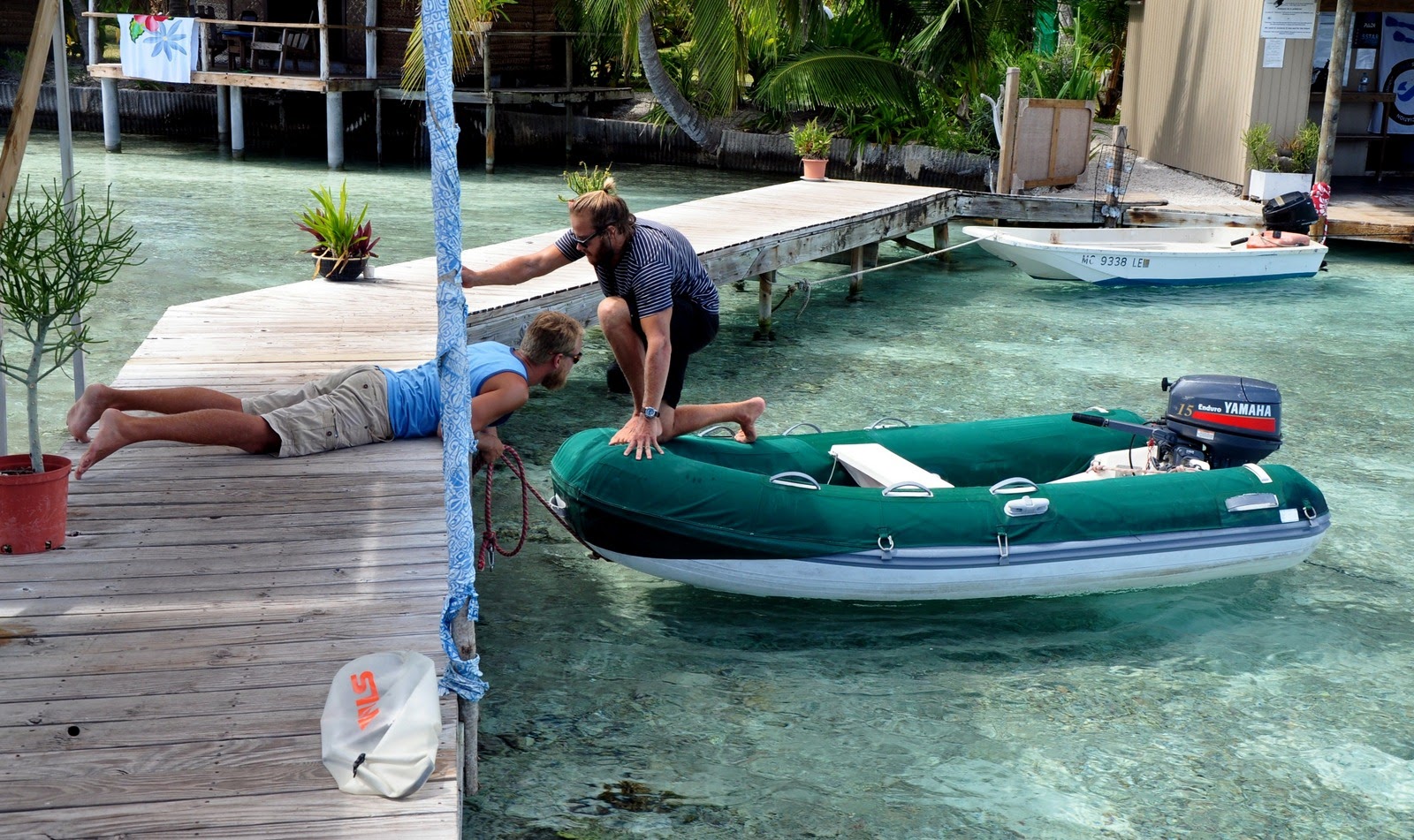 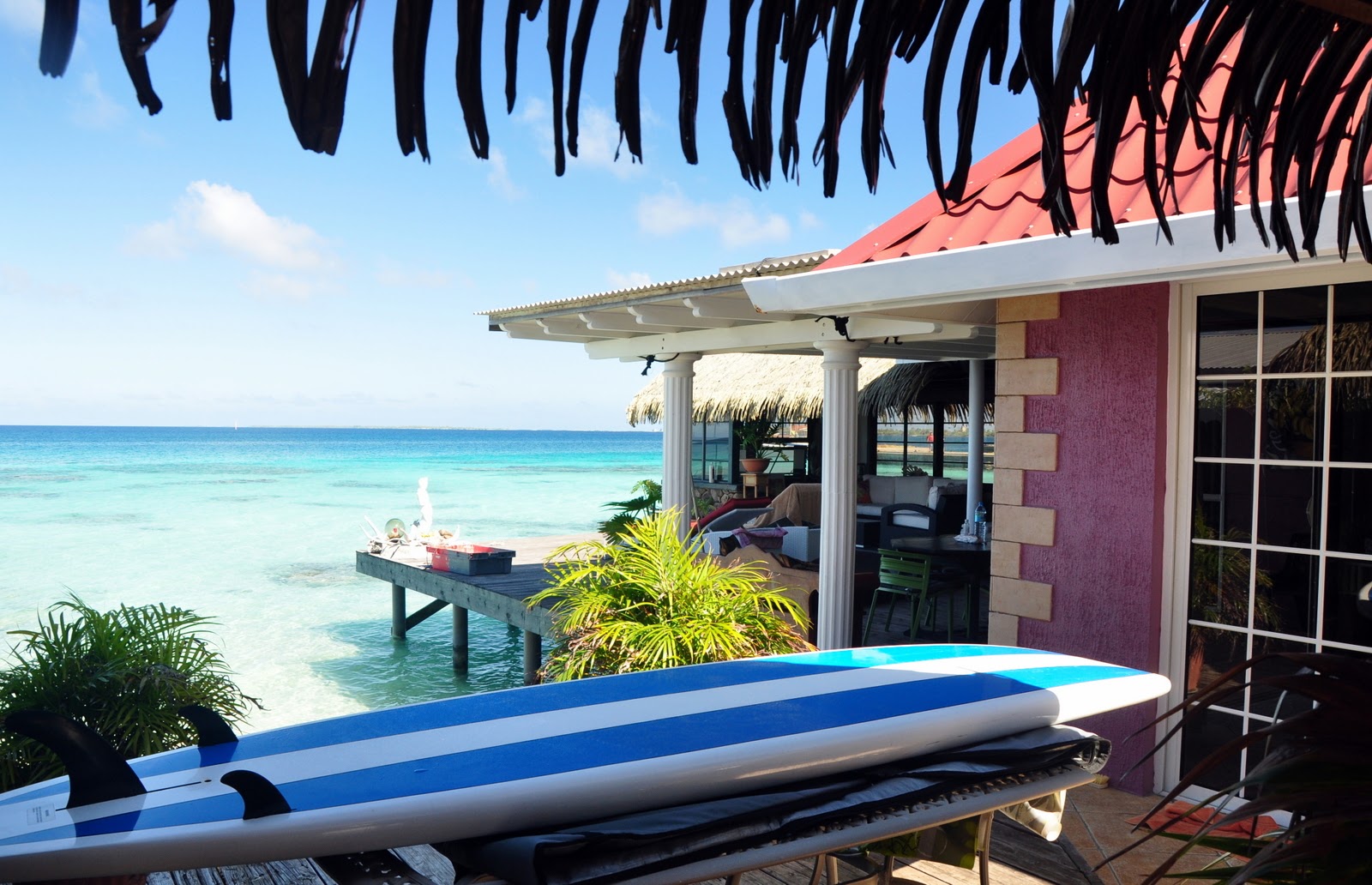 The backside of the Black Pearl pearl shop is their house. Probably the best house in the world. 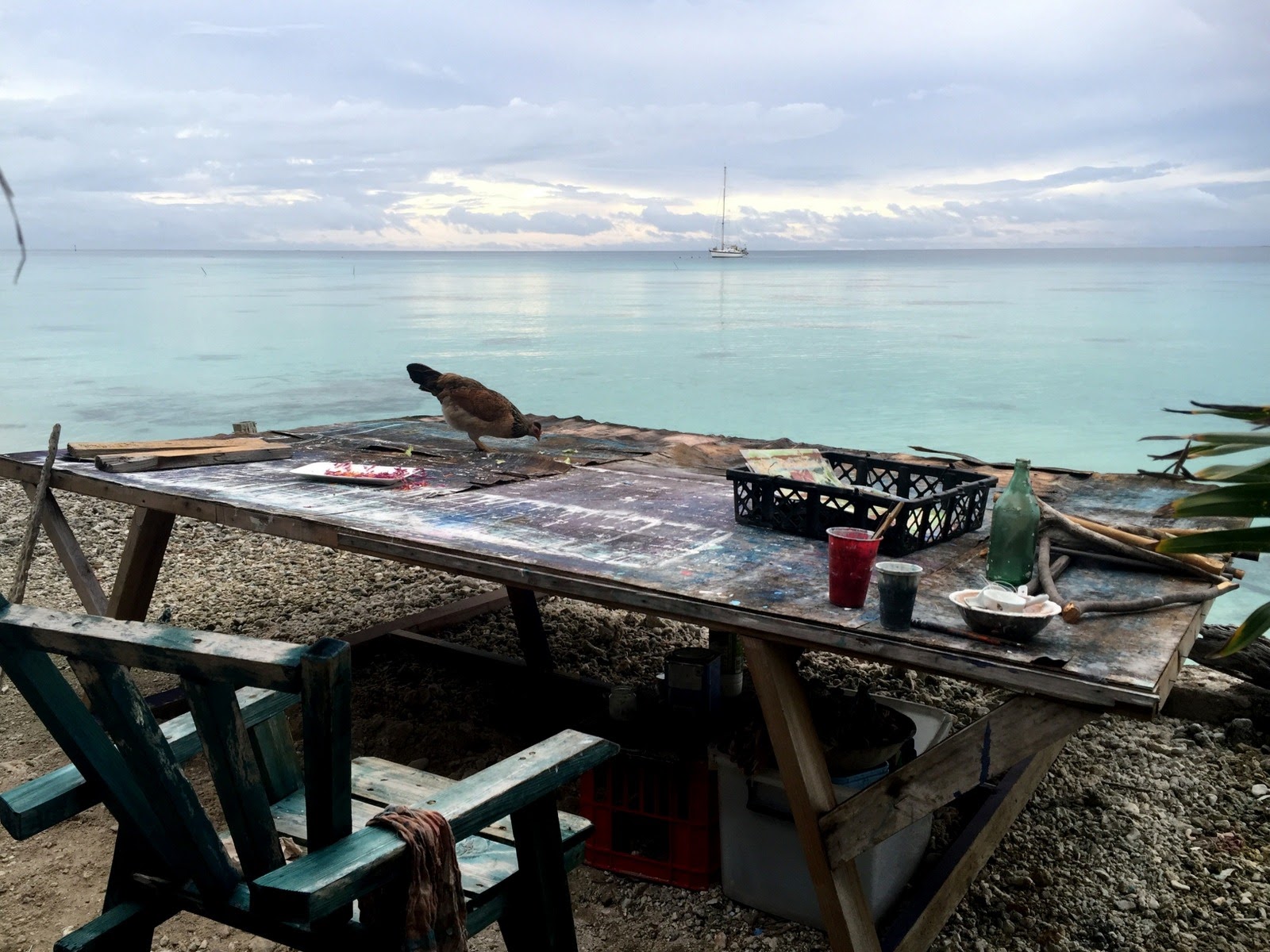 First night a pizza dinner was organised on one of the islets close to us. Manihi who ran the resort was a local guy, an excellent host who told us about the island, fishing and many other things as the pizzas went into the wood fired oven he had down in the boat house. Accompanied by some cold Hinanos, Tahitis very fine local beer. We also watched a music video by his extensively tattooed son and his band Tikihiri. Youtube their song “Lalalala” (?) on your own peril... A french family staying in one of the bungalows joined for dinner. As most of the very few tourists here, they were dedicated divers and here to dive the south pass shark dive, the biggest attraction in the area.

We also booked this dive for the next day. Luckily we also found out that the kite surf instructor we heard about in Nuku Hiva was here. We got him on the phone and scheduled a lesson a couple days later. Suddenly the busyness of Fakarava felt more positive.

The dive in the south pass was impressive. Starting at 25 meters at the entrance you catch the incoming tide to go into the pass with the current and absolutely crystal clear sea water. Colourful, fine limbed, tree-like coral coat the sides of the pass and groupers, sweetlips and all kinds of coral fish cruising in the current and hiding in the coral. And of course - everywhere you look there are sharks! Mostly grey reef sharks and black tip reef sharks but also some silver tip sharks. We had seen the before but this time was different, at 20 meters inside the pass we waited, holding on to some coral in the current to stay still, watching the sharks cruise in the current ten meters away. We waited 3,4,5 minutes and as we did the sharks came closer, getting less and less suspicious. At last only a couple meters away it was special experience to just lay down quietly down there and watch them. Sometimes opening their mouth to let little fearless cleaner fish swim into their mouth and clean their teeth. Then we followed the current into the lagoon, passing by schools of sharks in the pools created by the stream and finally going on a fast drift in the shallows and finally ending up outside the dive shop!

We moved anchorage to the south of the pass, over by the sandy beaches and long, shallow turquoise water. Here we were surrounded by a handful of really, really great boats. Our closest neighbour was Antoine Cartier Millon on his old Swedish Laurin koster 28. He got it for $4000 in Martinique, sailed it here without any big trouble. A solid old boat that just keeps going. He has all the kite school equipment in the fore peak and lives with his girlfriend in the saloon that has a wider berth to starboard and kitchen and smaller berth to port. It’s compact living but you got every thing you need! To get some more space he and his girlfriend also put a couple tents on the motu where they do their kite lessons. They can leave kites and equipment there, nobody will come and take it. From the other end of the boat-spectrum, Cinnabar to the right is a custom Schumacher 52 sloop built in New Zeeland, the slim, modern hull with a flat-bottomed stern can plane with the spinnaker up, doing over 20 knots! Tom and Sylvia on board were great, we came on board one day and were treated to fresh baked brownies and tequila shots, very nice! Next to Cinnabar was another rare speed daemon, an old Lagoon 55 catamaran from 1992. Built initially for racing with carbon mast and a slim hull with, especially for a cat, quite beautiful lines. So much cooler than the new ones!! Above us, a bit closer to shore was Big Fish, a Dean 44 cat. With that name we had to go over and say hello. True enough, on board was among others Max, snowboard pro splitting his time between here and the Alps, and his Swedish buddy Jakob who had come down for a couple months only to fish. I was happy to find someone to get into some serious deep fish-nerding discussions, they were not only trolling and spin fishing but also fly fishing in the passes and speed-jigging deep. Jakob is a fishing guide back home and this was Max’s sixth season here and they knew their stuff. I quickly realised there is a lot of new fishing gear I will have to purchase.

We all got at least one kite lesson in with Antoine. He is a very good teacher and since we have our own equipment and dinghy, he focused on trying to make us self-sufficient so that we can practice taking off from a beach or in the water and learning how to pick up the kiter with the dinghy. We all did some big improvements, specially Simon who shocked everyone by really getting up and going for long runs, even doing two jumps! If they were entirely planned and deliberate, I do not know, but it sure looked cool.

The last night in the anchorage we did a barbecue on a small motu with Big Fish and Antoine, grilling what we had caught spearfishing in the day. With us we had eight fish around two kilos each, groupers, sweetlip, parrotfish and unicornfish (!). Put them gutted but whole over the coal and grill, then eat with just salt, pepper, lime and some rice we brought along. Perfect! 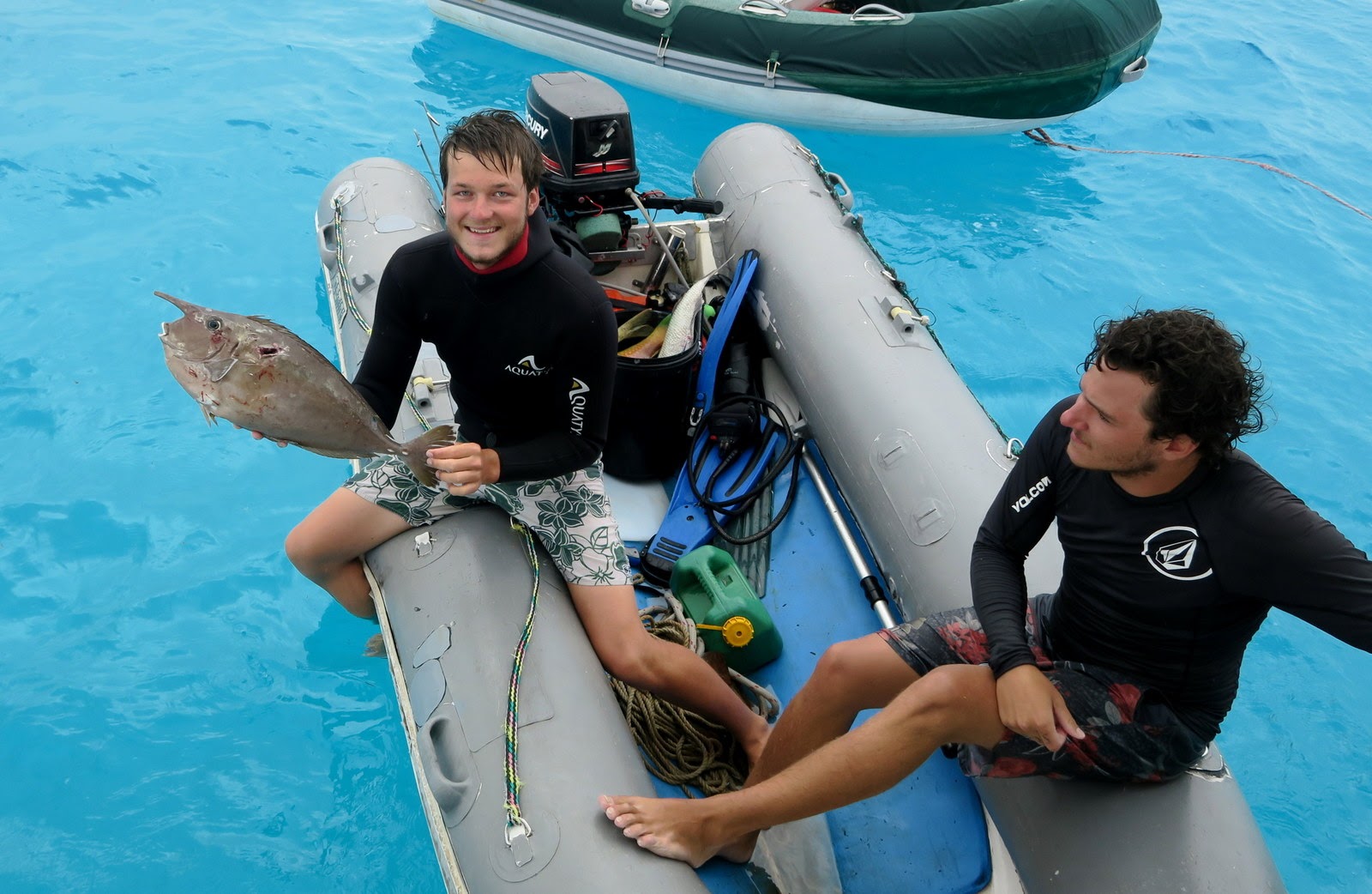 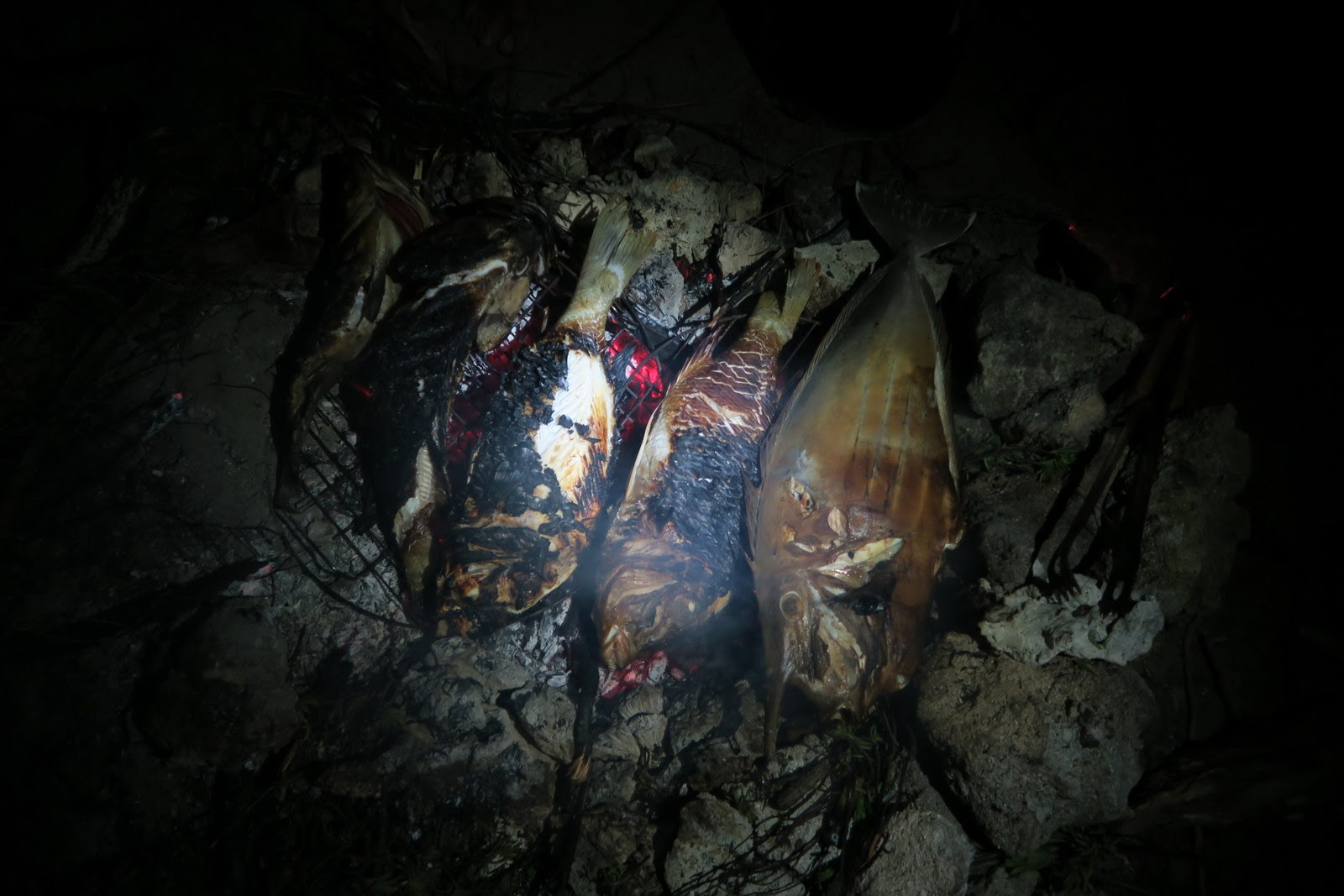 Best way to cook fish - skin on, whole on the grill 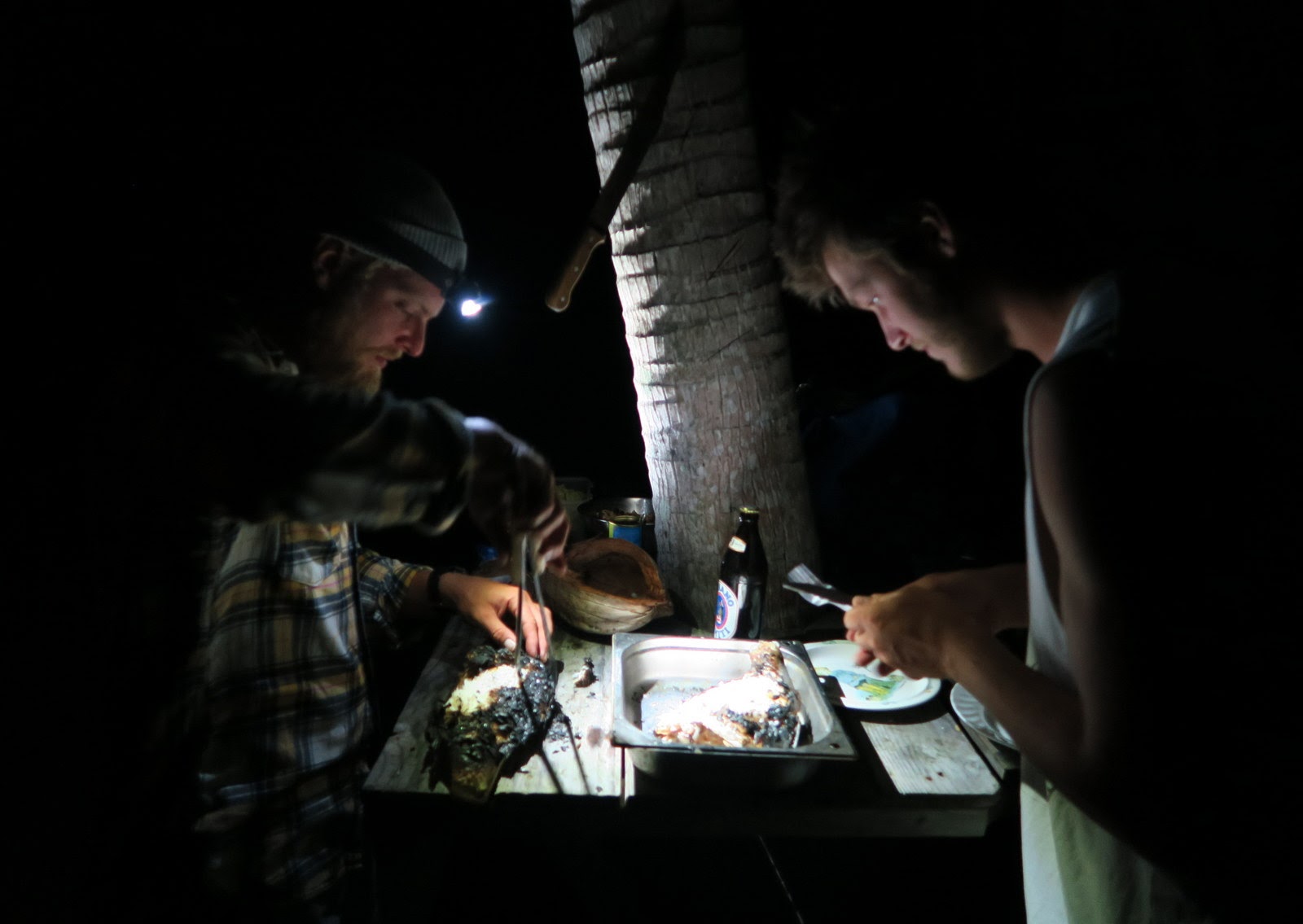 A lot of fish to eat

Then on to the “big town” in the north Rotoava, where one can find shops and some tourist resorts. By the dock there was a smaller cruise ship anchored and the village was filled with cheerful women walking around everywhere. Pretty great, we thought, then learned it was a lesbian cruise boat. Typical. Anyway, we walked around the quaint little town, checking out some local artists crafts, pearl shops and meeting our old polish friends on Wassyl that laid along the dock. Next day was a Big Day in Rotoava, the bi-weekly supply ship from Tahiti came with fresh produce and fuel, we filled up on both.

We also did a couple dives there with Top Dive. Their office here is ridiculously nice, house extending over the water, small pier going out over coral reef, dive boat in the end. And the dive was just as good, even better than Fakarava south! Not as many sharks (but still many) but just an incredible abundance of fish, huge schools of goatfish and snapper, tunas, barracudas, huge blue/green napoleon fish. Also the best visibility I’ve seen, over 50 meters. Looking over the deep edge at the entrance to the pass with the sharks circling around you is exhilarating. Then inside the pass you go with the current and follow ridges and small canyons on the bottom, coated with coral, and go down into pools where big numbers of fish and shark rest in the lee of the current above. 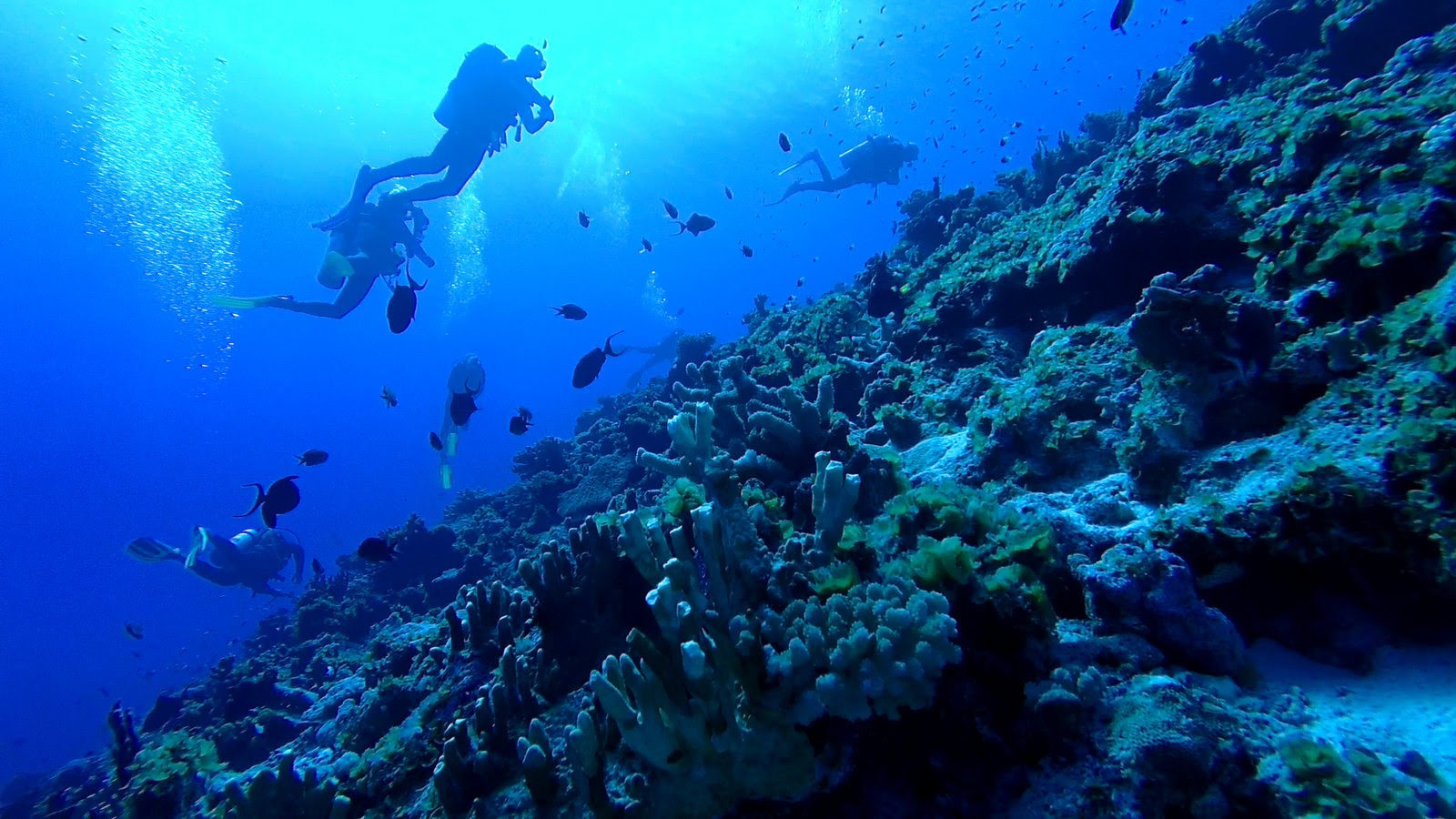 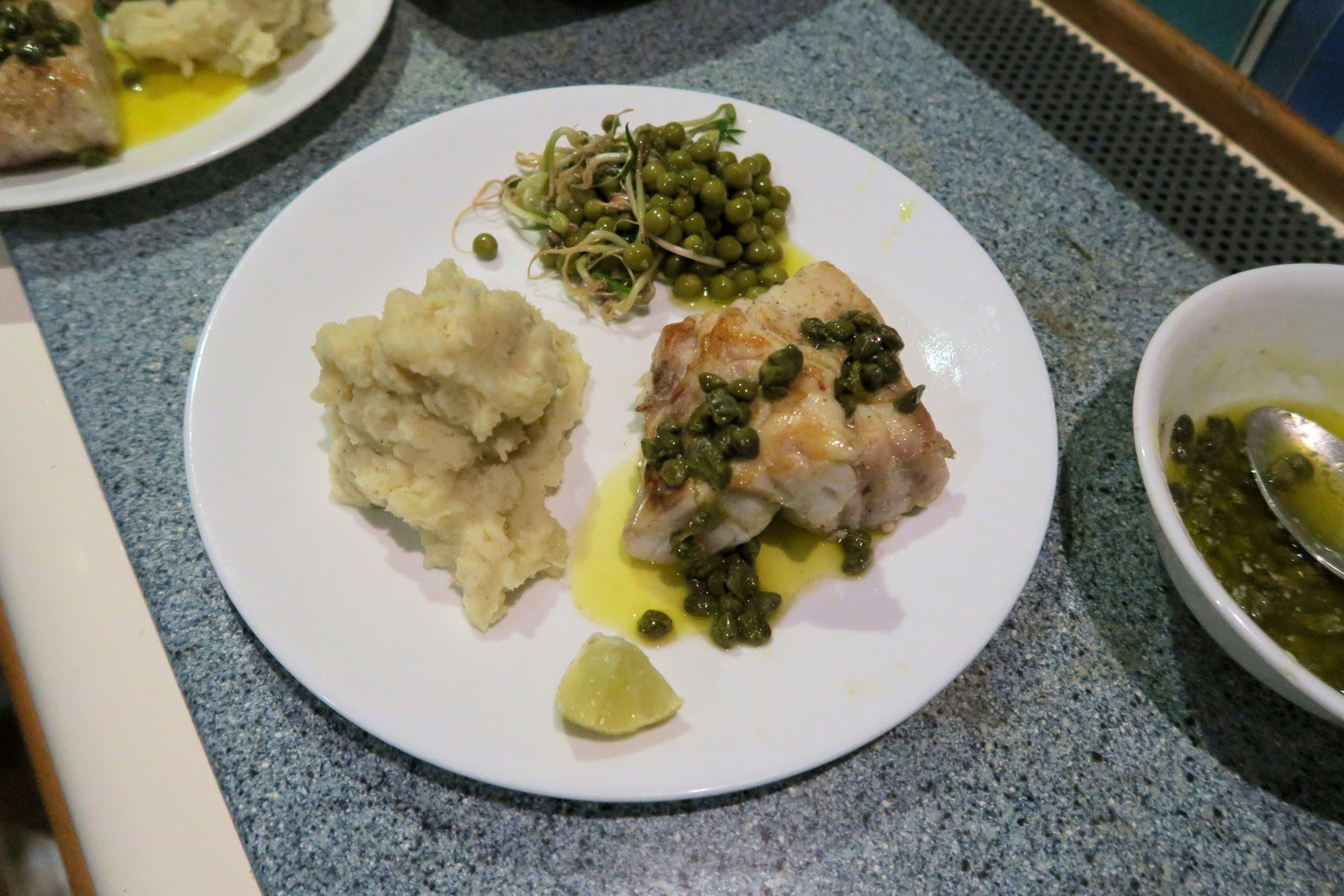 I’m writing this en route to Tahiti, and we have just visited Toau that Hampus will write about. We got to see a lot in our 25 days in the Tuamotus but this time I really feel I wish we’d have time to stay longer. To be anchored in the calm lagoon inside the atoll, scattered coconut trees growing along the lagoon rim, you hear the waves break on the outside. Under the boat is a beautiful coral reef with fish that are not afraid of humans. The choice between a complete natural experience in a remote, uninhabited atoll or activities and socialising in the larger ones. Meeting the welcoming and friendly people who live on the islands. It all seems a bit unreal already. I’m sure this is a place I will miss next winter in Stockholm… Oh well, still some good places left to see for Kenobi! And it will be good to get back to civilisation in Tahiti. Get the boat back in order (all-new Raymarine electronics will be cool), shop at Carrefour and see some people again.