We left San Cristobal in the early morning. It was a sunny, calm day and we motored out of the bay cooking our usual porridge breakfast with fruits. With us we also had Fiona, one of our new friends from San Cristobal. It was an easy day sailing with some wind at times and otherwise motoring over calm seas. Not so much animal life as when coming into San Cristobal but great views of Isla Santa Fe on the way. 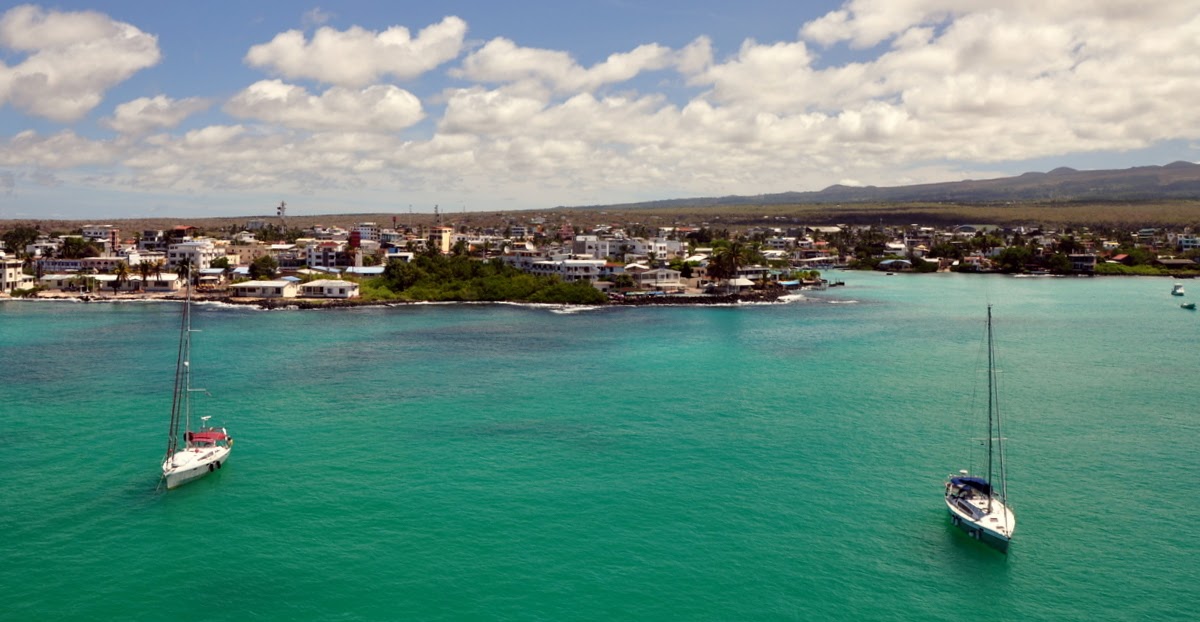 The anchorage in Santa Cruz was more crowded than the last and here yachts anchored with both bow and stern anchor. This meant we had to do the same and put our secondary anchor in the dinghy to get it behind the boat and got it to hold fast after some snorkelling to find a good sand bottom.

After eleven days in San Cristobal, Santa Cruz felt like a bustling metropolis. This is the centre of the tourism industry so the anchorage bay outside Puerto Ayoura is filled with cruise ships and a constant flow of tenders going to and from land with passengers. 20-30 thousand inhabitants (depending who you ask) live here and the city main streets are lined with shops, tour companies and restaurants. Not the same quaint feeling as the sleepy, pristine beach walk in San Cristobal, this is more of a real city and there may even be some dirt here and there. “Where are all the sea lions?” is something we wondered soon after arriving. It’s remarkably how different the animal life is here compared to San Cristobal, almost no sea lions in the anchorage but instead small black tip sharks, some 2 m big galapagos sharks too and by the pier you sometimes see a huge school of 50+ small rays cruising in the surface. Lots of marine iguanas (a small one was in the water taxi yesterday!), pelicans and turtles. For a nature geek this place is, obviously, just completely amazing. By now taking a photo of a beautiful pelican on a rock is just no fun if there is not a iguana in the foreground and a lea lion jumping in the back. Seriously, this place has exceeded our expectations and we just feel incredibly fortunate to be able to see it all and live on a boat where it is going on around us 24/7. 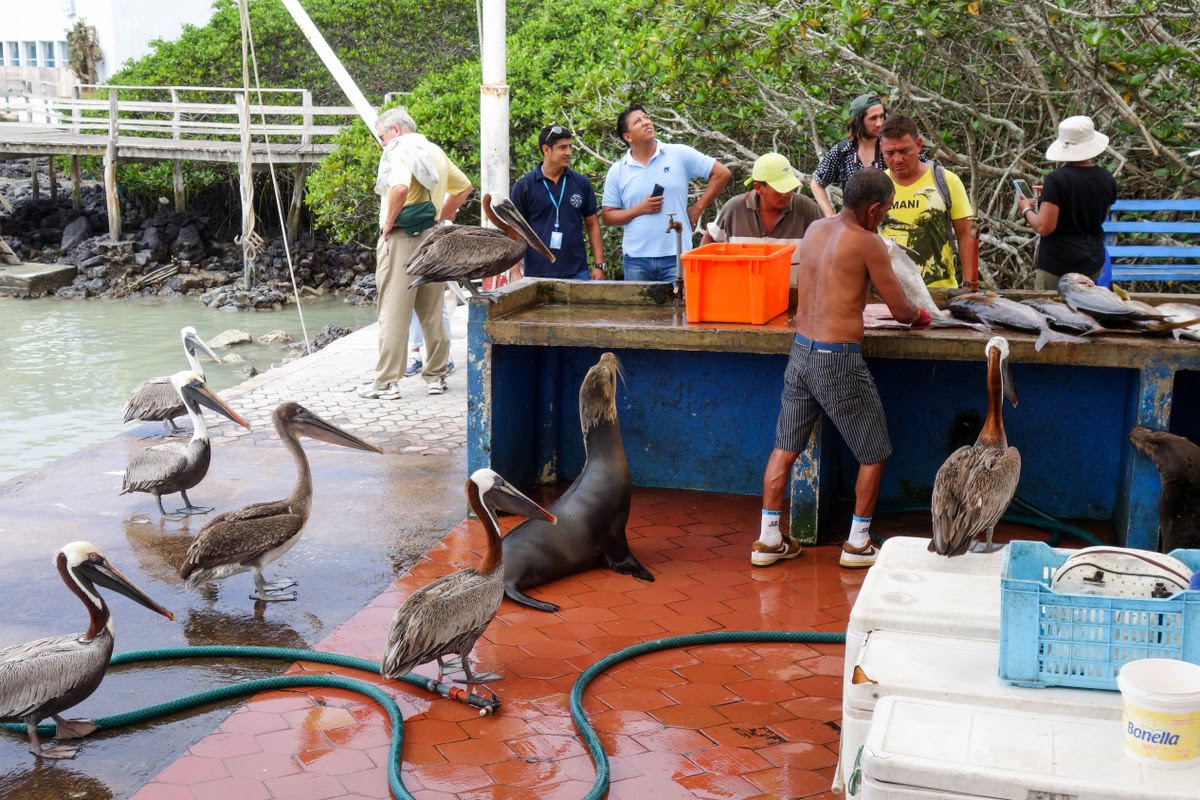 The fish market has more pelicans and sea lions than people! 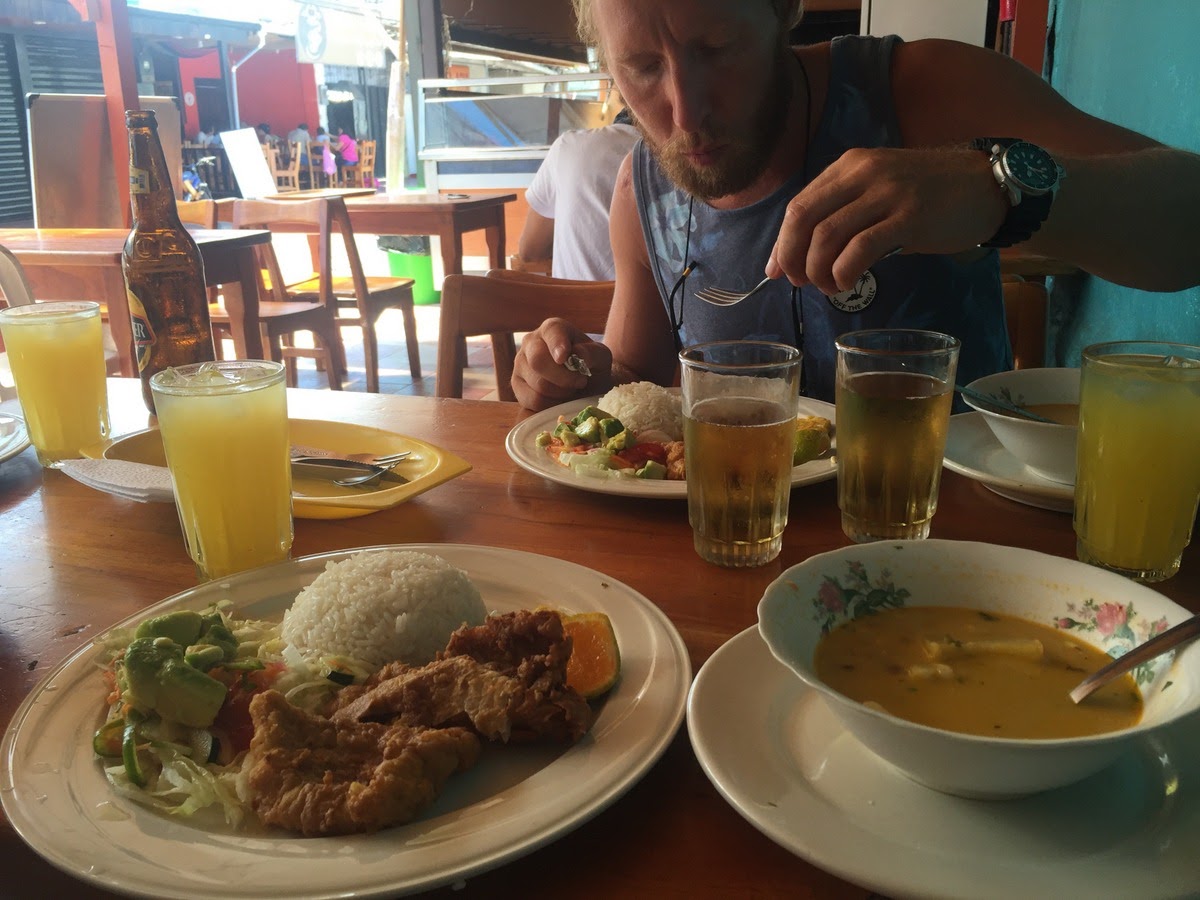 Most important mission coming here however is to get the electricity sorted after the lightning strike. Here there are a couple proper marine stores, Bodega Blanca catering mostly to the motor boats but have a lot for sailors too, and Electro Nautico, run by Swiss couple Judy and Hans, who are our only chance of getting the precious Raymarine instruments up and running. There is also a smaller, rougher mechanical shop that have spares for engines etc. There we met the crew of Mary Ann II, a Colin Archer heading for Marquesas. We talked about the constant struggle to find parts for your boat in small places like this and they concluded long journey sailing is not so much sailing as “Fixing things in exotic places”. Well put.

We also got some help from Claudio, a very friendly and helpful local electrician. He managed to get us a new regulator for the starboard engine so now it is charging again! We also been up the mast replacing the broken lights so now they are all working again. Being up there was an amazing experience in itself, I could see a 2m shark circling Kenobi as well as sea lions and huge turtles coming up for air. What a place. 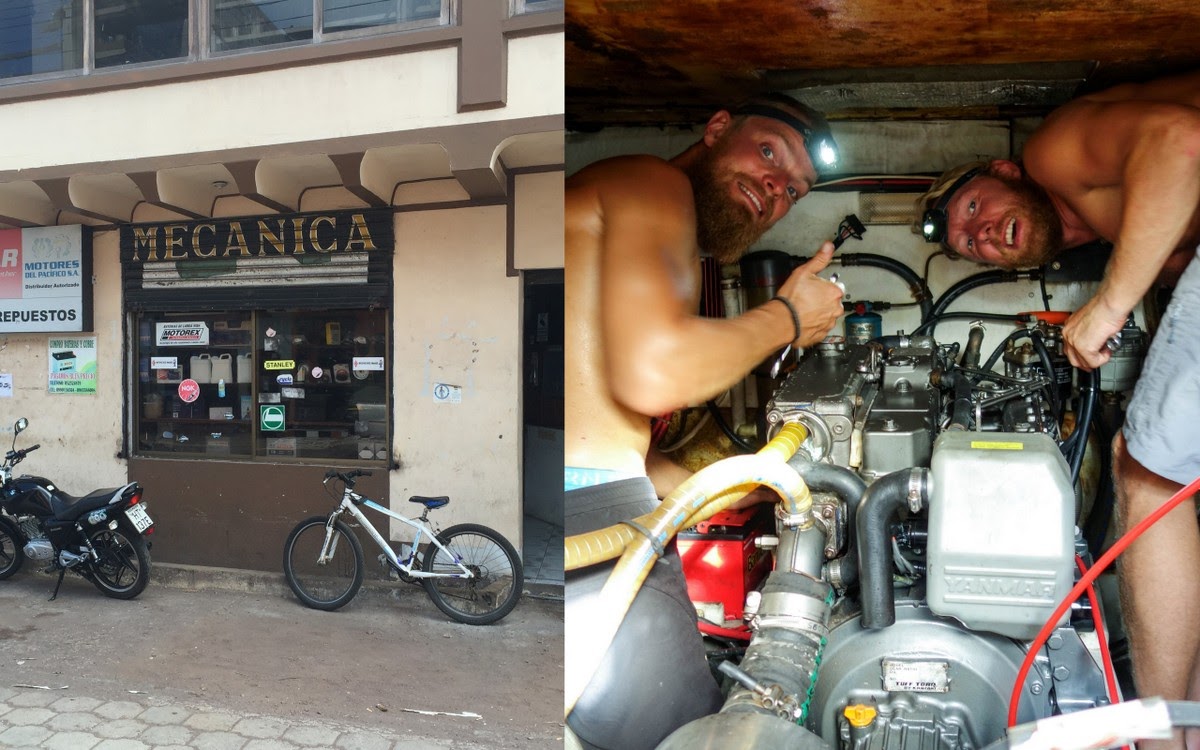 Left: one of the must-see sights for cruisers, Mechanica Gallardo. Right: doing a full engine service, plenty of space for two people!

The TODO list kept on growing but we also had to take some time off to go exploring. We visited the Darwin Research Centre which is part museum and part research facility where lots of volunteers and others stay and help in various projects. A big thing now was tracking down a new fly that has invaded the ecosystem. This ferocious invader climbs up the nose of the Darwin finches and eats it way into the brain, killing the bird. The volunteers will sit and watch video recordings of finch nests, counting the flies flying in and out. Meaningful but tedious work, no doubt. Otto, who we met in San Cristobal and working as a photographer, showed us a great place to snorkel in the bay outside the facility. During the ebb, if you stick close to the long rock ridge to the left of the bay and wait, you will see lots of huge marine iguanas swimming past you as they return from feeding on the sea weed growing outside the bay. It was amazing to be able to get so close and see them swimming in the water.

To the other side of town, to the west, is Tortuga Bay. They have very well built 2 km walking path through the rocks and bushes leading to the beach. For me it was the perfect beach, white sand, completely clean, almost no people and a really good beach break all along the 1km beach. This is where we first tried out the surfboards we got in Panama! It was hard paddling out the where the waves break, out boards are too big for duck diving (as we are beginners) so you get washed in by the constant onslaught of waves. After a while I gave that up and just had lots of fun surfing the white wash with the long board. 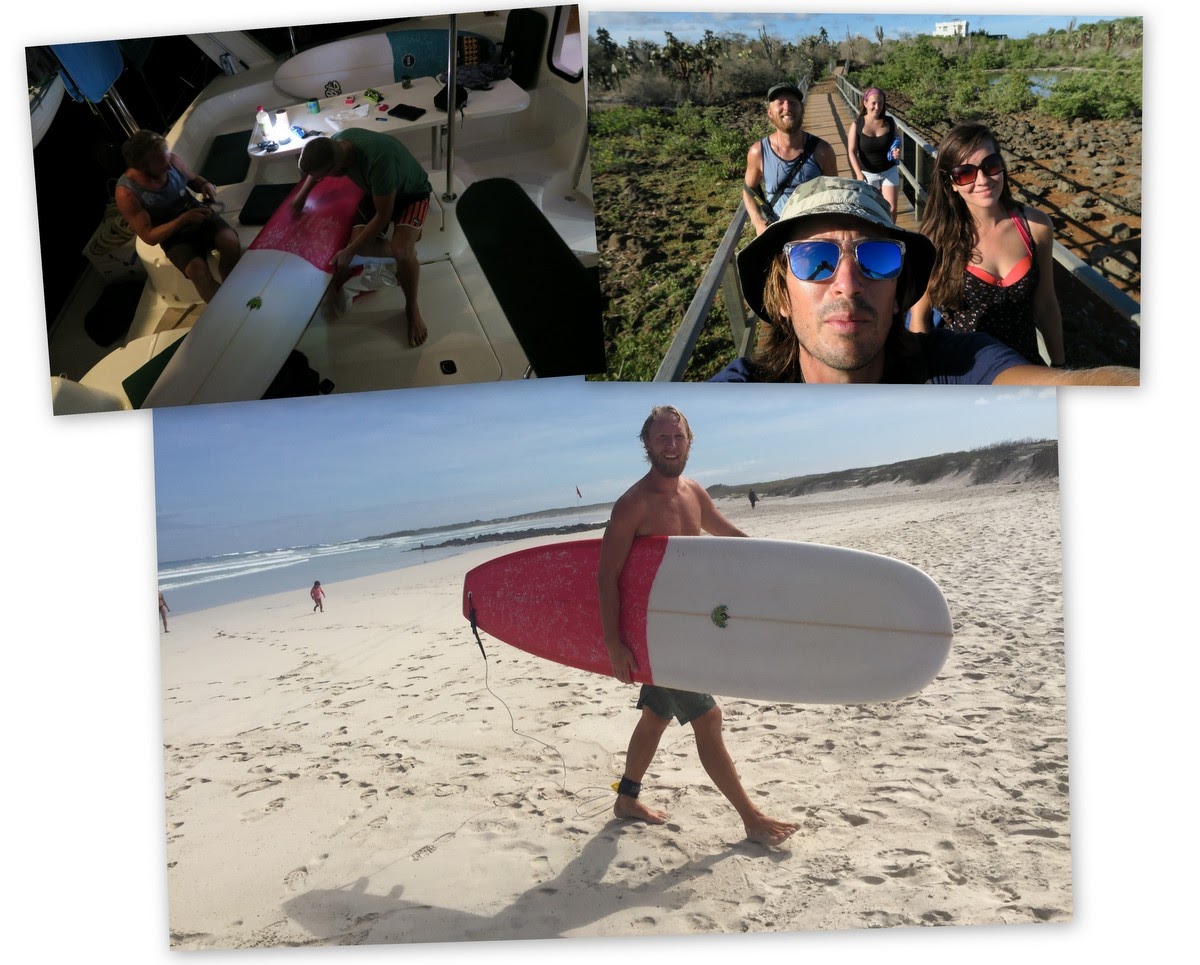 Waxing the boards and off to Tortuga Bay

Another cool place close to here is Las Grietas. You take a $1 water taxi across the bay and get of close to Playa Alemanes, then walk along a foot path past some pink salt plains. In the end you get to a ravine with crystal clear water that is up to 15m deep. The sea water gets mixed with fresh water creating a micro ecosystem. The two pools that have formed in the ravine are inhabited by fish that came in the when they were small and are now stuck, feeding on all the brown sea weed growing along the rock walls and they grow huge! The biggest parrot fish I’ve ever seen and a big school of “lisas”, some spool-shaped silvery fish with small head and big eyes. Best time to visit is in morning or midday as you get more sun, clear water and less visitors. In the afternoon its a popular place for locals also and it gets pretty full. 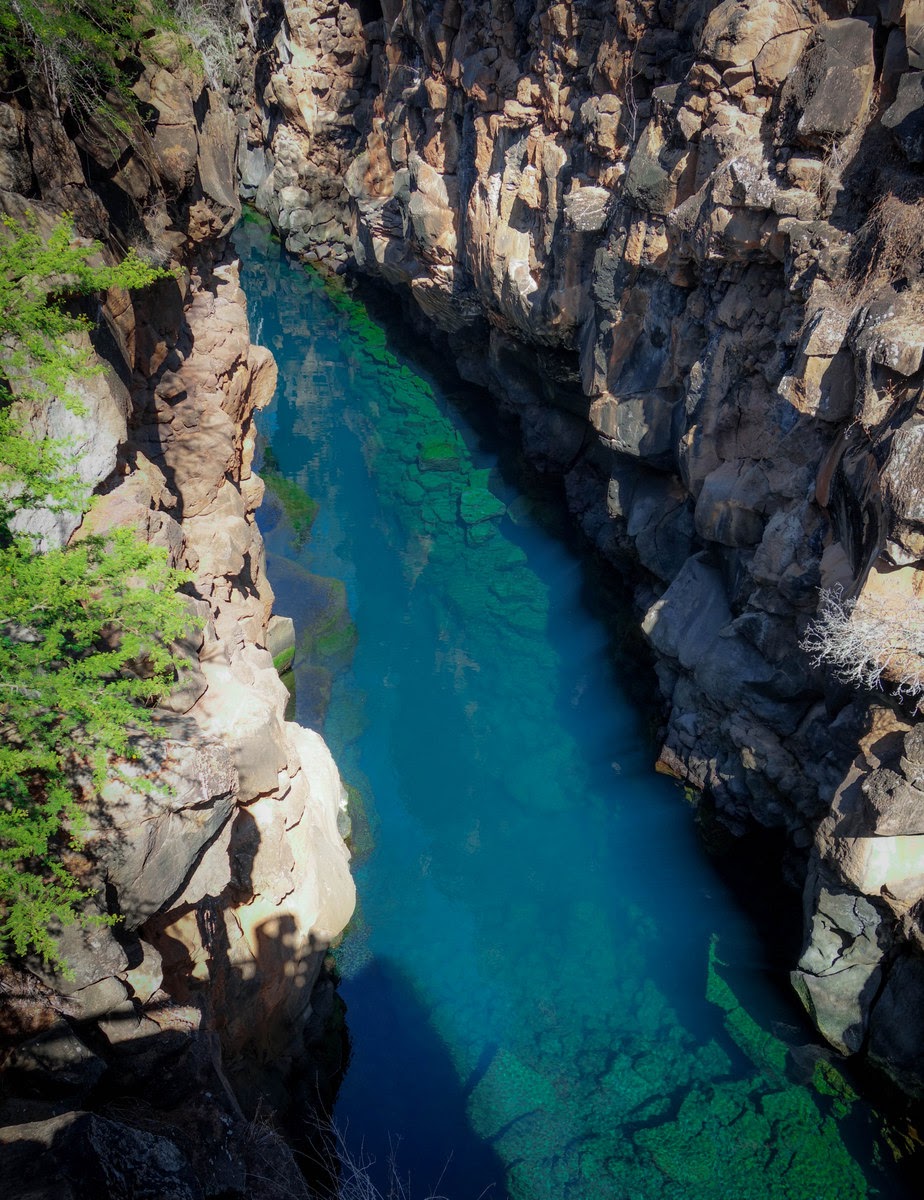 Probably the most unexpected discovery in the Galapagos Islands has been it’s night life! We thought we would be surrounded by elderly rich bird watchers and were prepared for some quiet evenings and early mornings. This was not the case! Ends up it’s not too expensive to get here from main land Ecuador and there are lots of cheap hostels so there is a large amount of backpackers and other travellers coming to the islands. It’s a very friendly, open atmosphere and even though there is pretty much only one proper party bar/club here, Bongo Bar, it’s always something going on there. Drunken sailors meets locals, surfers, backpackers and exhausted finch fly research volunteers. 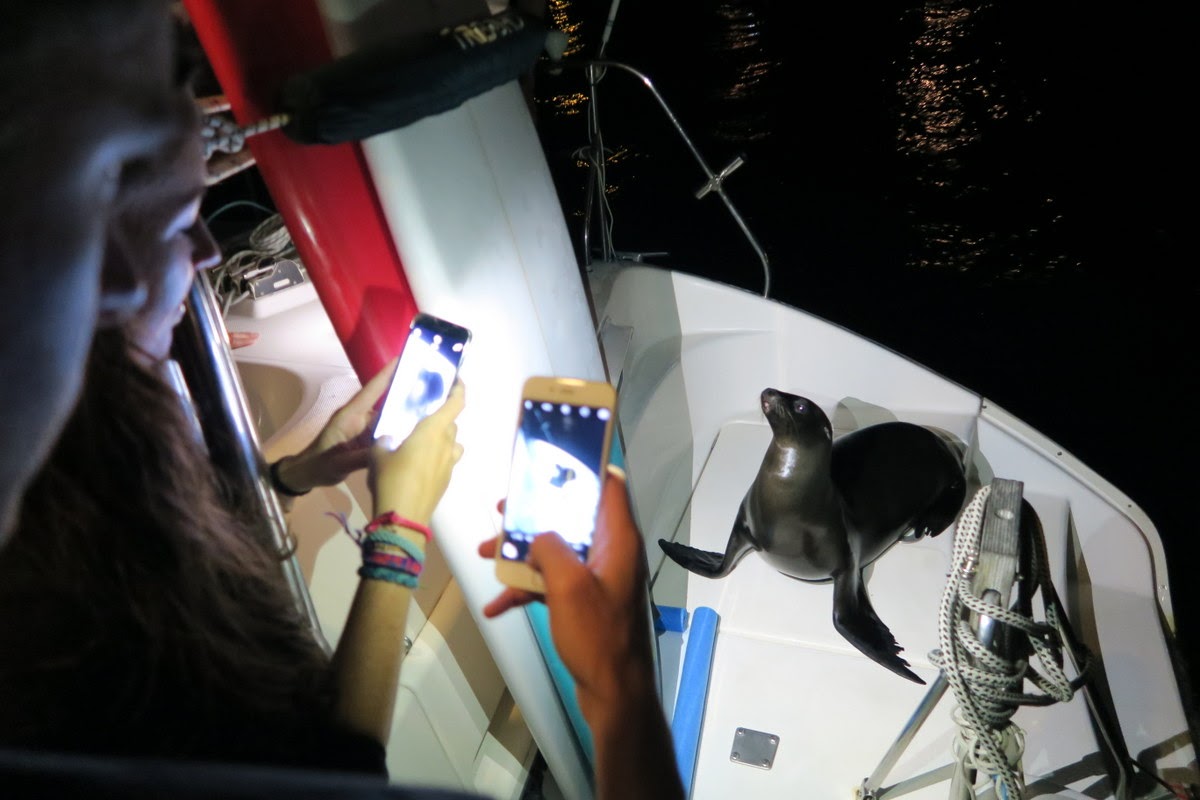 Simon and I opted out of Bongo one night to hire bikes in the morning and head inland. We took a taxi together with fellow traveller Crystal and did a couple small hikes in the highlands. Then down a dirt road to Rancho Primicias, a tortoise ranch where visitors can walk around in a large park inhabited by huge tortoises. It’s cool that even in these large attractions here in Galapagos it’s never much people at all and you get to move around very freely, only some signs asking you to not go closer than two meters to the tortoises. We even got to try out life as a giant tortoise… 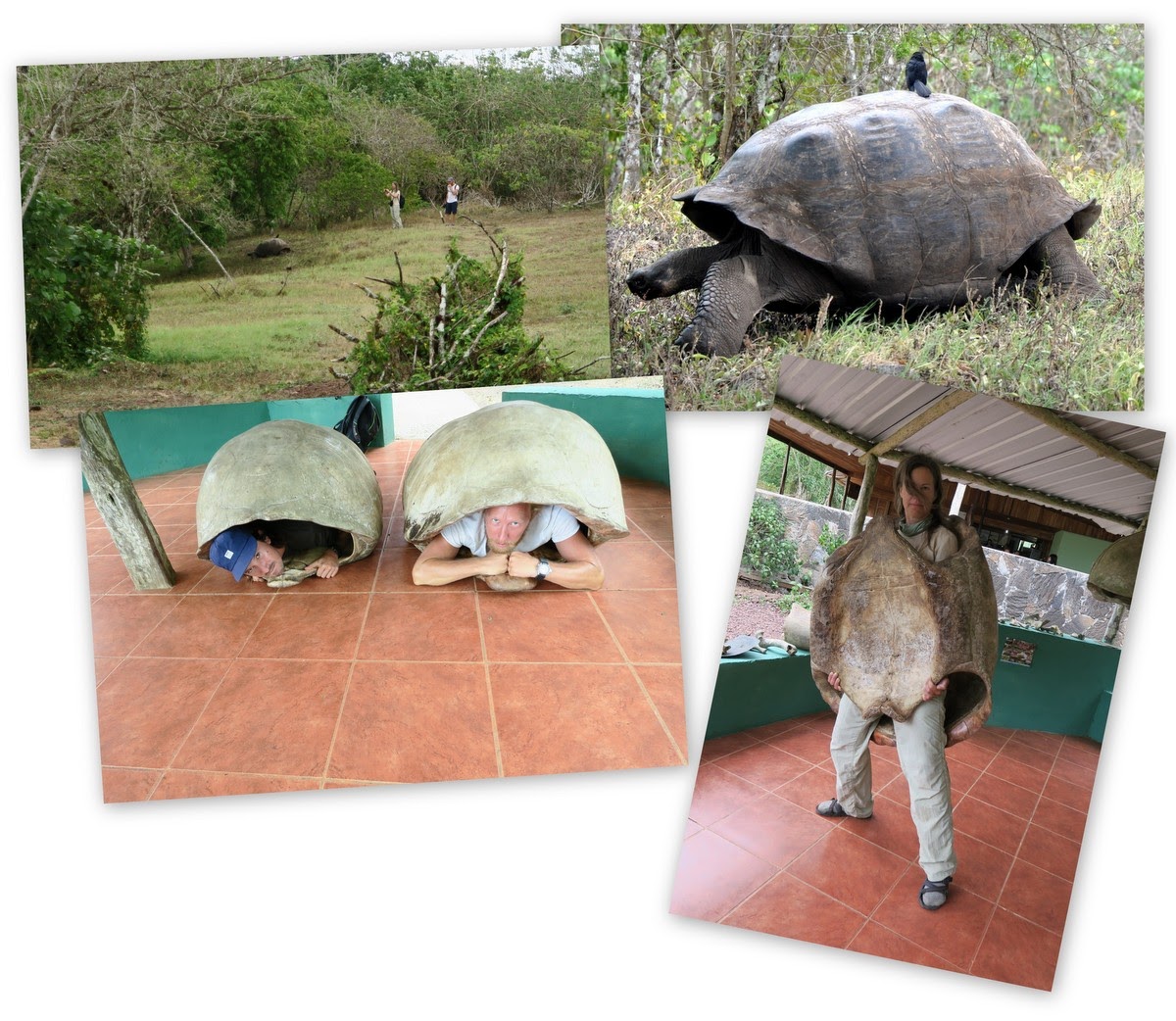 The tortoises of Rancho Primicias

After that we went to see two different lava tunnels that you could climb down in. They were large as the subway tunnels back home and it was unbelievable to think they were once filled with lava. Now mostly empty, some parts had rocks that had fallen down from the roof. We walked a bit faster past those places. Also here very uncrowded, one tunnel had some nice Australians in it and the second, 2km one was completely empty. 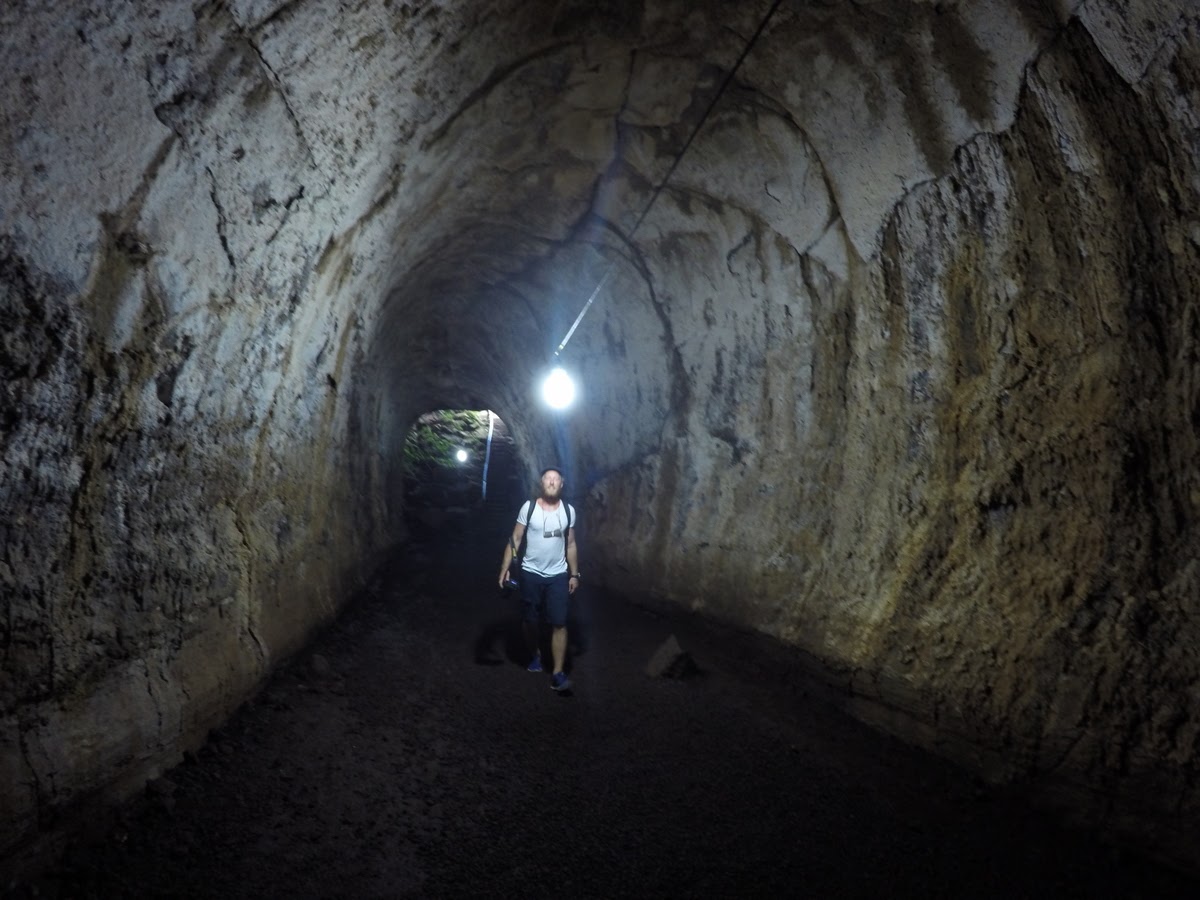 Simon heading down the lava tunnel

The last day in Santa Cruz we got the final verdict from Hans on our electronics. Not much could be fixed and ordering to here would take a month. Oh well, at least we got a report to show our insurance company that proves what is broken. Next place to fix stuff is probably Tahiti and we hope to be able to order new equipment to there in advance. The last night we celebrated with lobster dinner at one of the outside restaurants in Los Kioskos street and in the morning sailed on towards Isabela.