First up - BIG thanks to you who have been active and commented on our posts, it's really fun to get and we appreciate it a lot. We now have better email notifications set up so we can be better at answering too!!

The post by my father war really great and captured the spirit of the crossing to Galapagos. We were delighted to have him on board, having good times together and enjoying the extra items he provided to our stores, fine wine and cheese, box of cuban cigars and lots of salty liquorice brought from Sweden. Glad it all came to be such a good trip, despite the grim outlook in the beginning.

However, the passage started with a repair pit stop on a beach in the Las Perlas islands outside Panama City. The new escape hatch we had ordered to replace the old leaking one was on board and we wanted to change it before continuing. So using the coordinates given to us by experienced friend Andreas from 7hav.se we found a suitable beach to “beach the cat”. This is done by simply running aground during the ebb and waiting for the tide to recede. after 30 min Kenobi was standing steadily in the sand and Simon assisted by Hampus could get to work. The old hatch was cut out and the new one could be fitted and sealed tight using the 3M 5200 compound, creating a flexible and very strong seal. Took two tides to get it all done and we enjoyed our stay in these beautiful uninhabited islands. At 23:30 on May 5th we were all done and the tide lifted Kenobi agin and we could continue sailing. 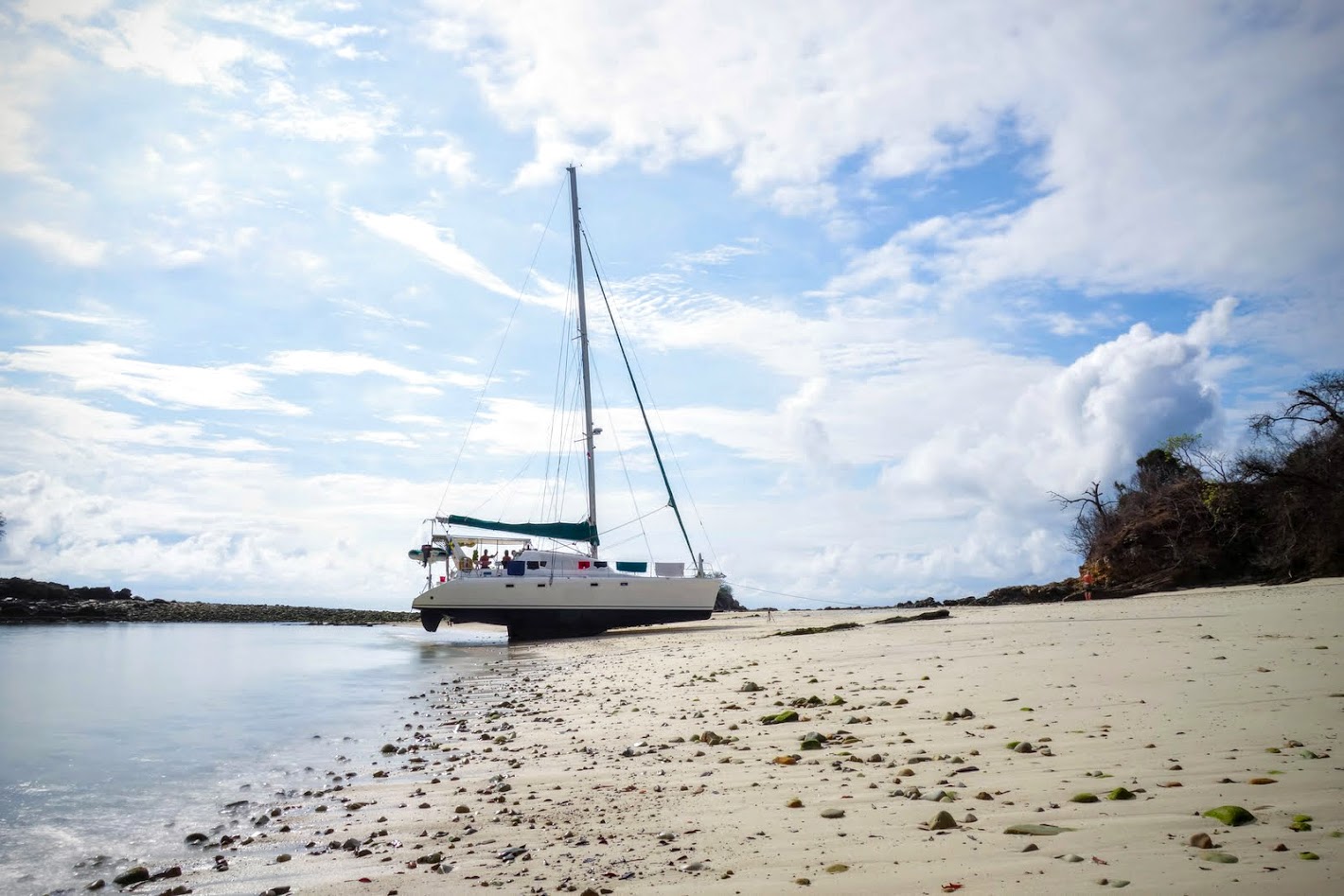 Kenobi stranded on the beach 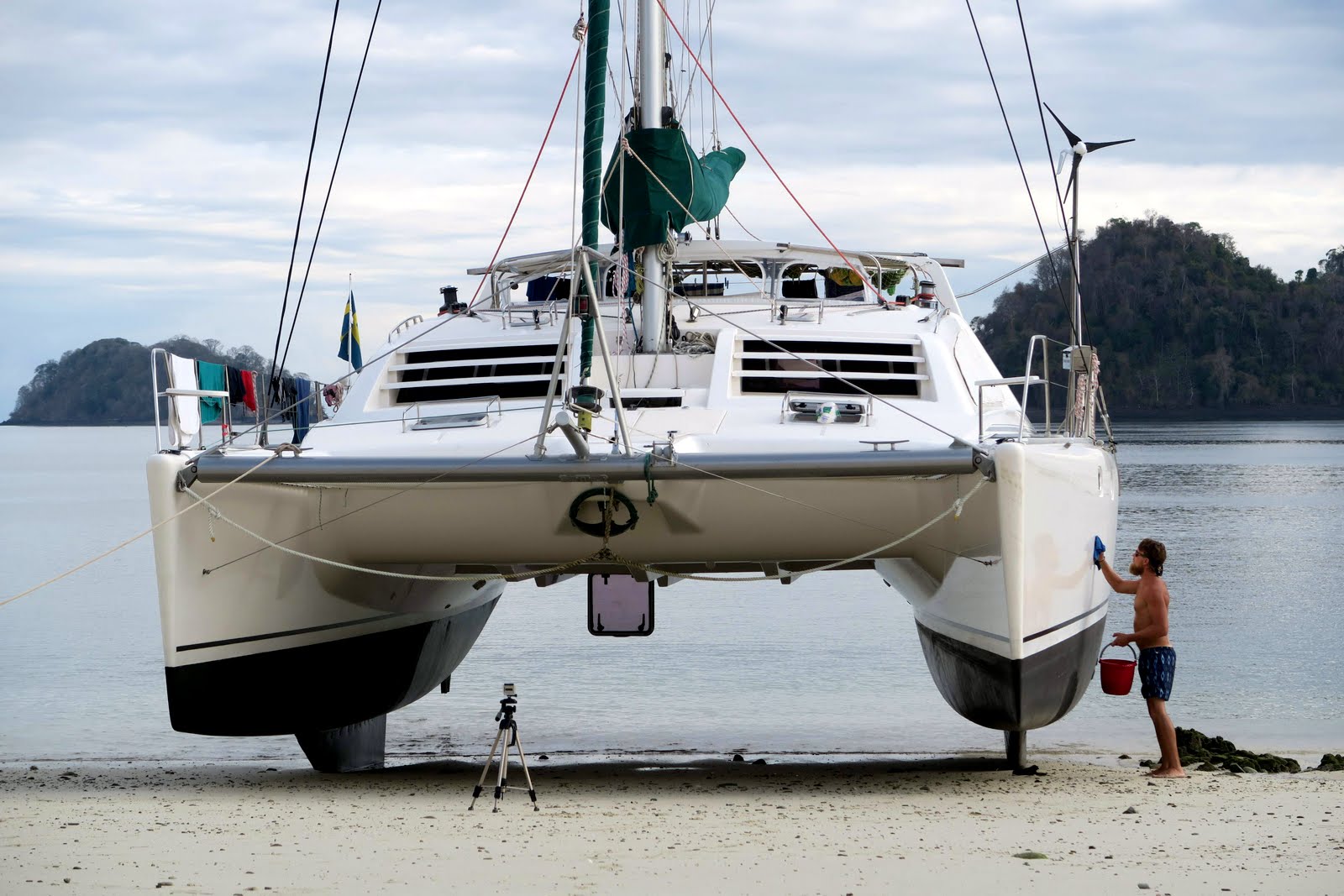 Working hard all through the night
Preparing for takeoff

The first days were far from ideal sailing wise. Rain, rain and no wind. It’s hard to describe the uneasy feeling you get on a passage when the wind fails and the feeling of disgust when having to motor for days on end. The alternative would have been sailing doing only a couple knots and with flapping sails getting chafed against the rigging, that’s no fun either. Also we had a deadline to meet, Olek was flying home on the 16th and we couldn’t miss that. One day into the crossing I got a fever and bad stomach and soon after Simon also got a fever. No big problem for me, I was allowed to stay in bed watching Galapagos documentaries on the laptop while the other three took four hour shifts at the helm. My fathers medical expertise proved very useful when me and Simon got ill and were taken care of and looked after at the same times as we had an extra hand for taking shifts at the helm. Simon was finally put on antibiotics a few days later and came back to life. And in the middle of all this there was The Lightning on May the 8th. 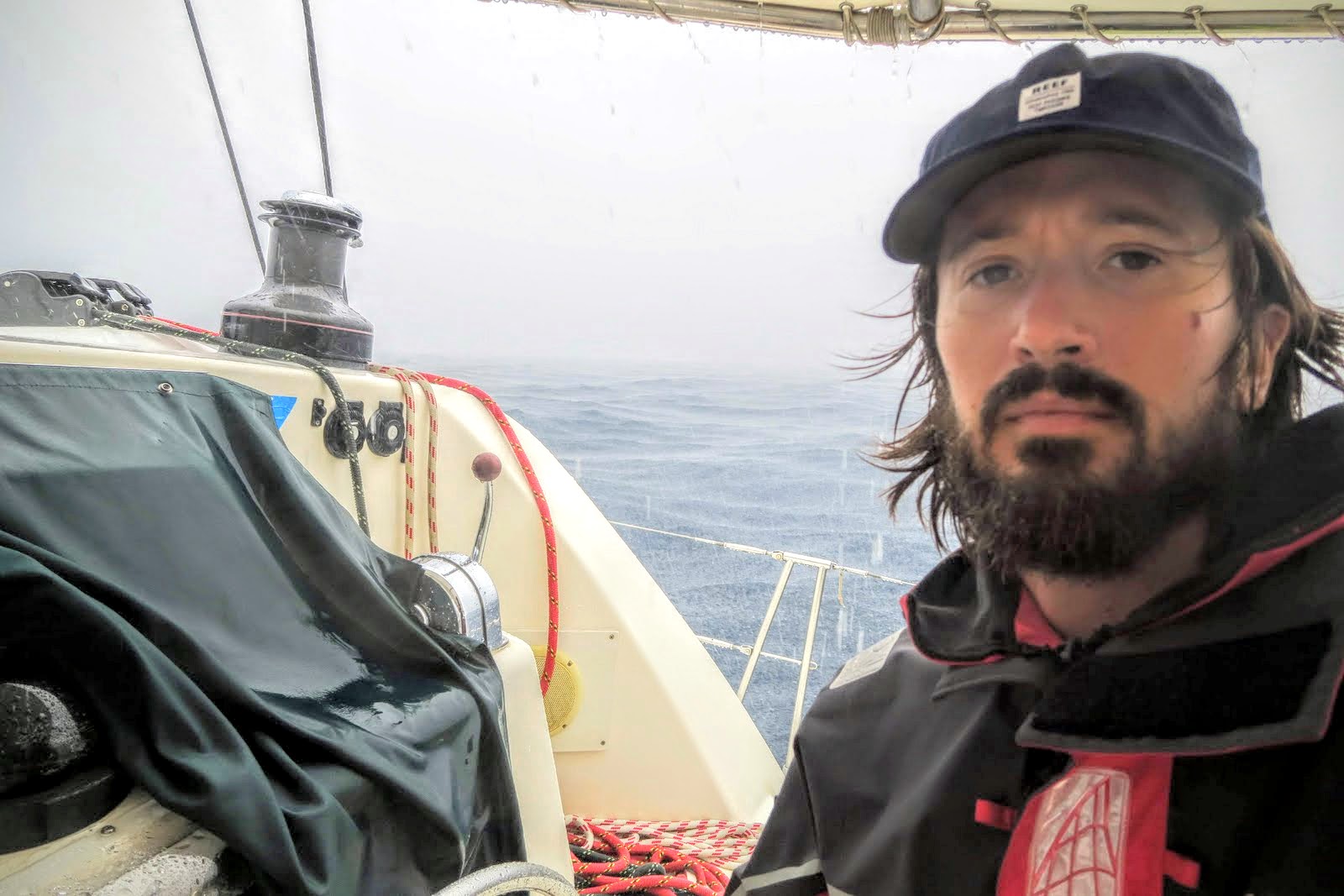 There had been lightnings around us for days and we had become accustomed to them. This time the rain was really heavy and lightnings a bit closer and louder, counted three seconds from lightning to thunder. Anyway, we believed getting hit was such a slim chance that we did not think to turn off electricity etc. And in an instant it struck right above us. I got a small shock from holding the metal door post and felt some ringing in the ears. Simon saw fine white smoke under the saloon ceiling. All electricity shut down. The instruments that went down are:

At least engines were still running and electricity charging from one engine, lights inside working. We could sail on using our iPad/iPhone and Navionics as GPS. Main fridge busted but we have another smaller that we could turn on and move the most important provisions there. All in all we were good.

A couple days later we were finally south enough to hit the wind belt we had seen on the GRIB files 4-2 degrees north. As dad said in previous post, sprits were lifted and we were flying along. Speeds hit 7-8, sometimes 9 knots and hope came back of being able to have time to see the Galapagos a bit before dads flight home on the 16th. As we started sailing and speeding up the fishing also improved. A few nice little tunas were caught and a beautiful smaller striped marlin around 8 kilos. The seas finally also became the way they should be on the ocean, smooth long waves and not the choppy seas we had been having. We could sleep without the hard banging on the hulls and finally we felt rested.

We even had time to read 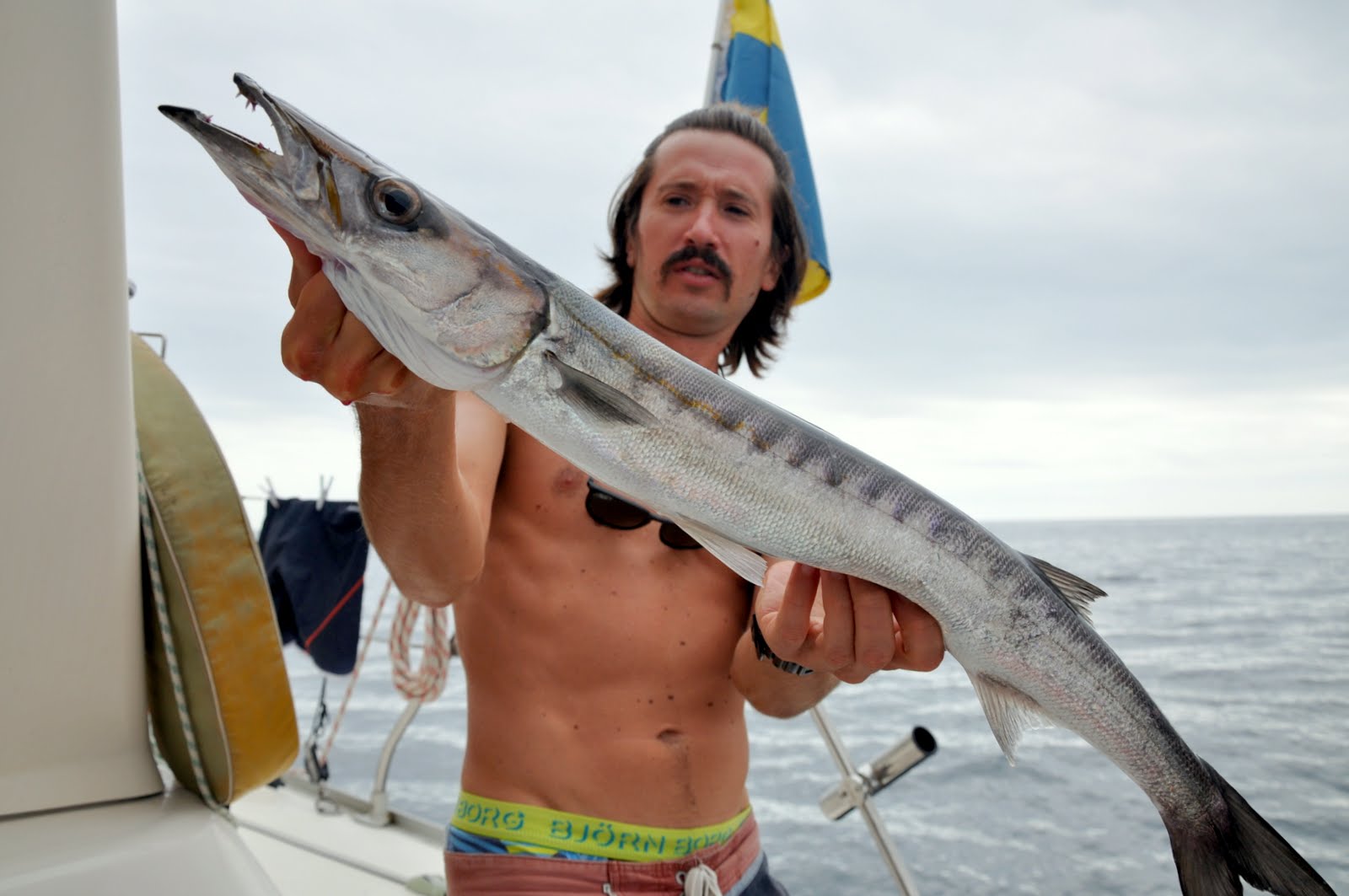 The last couple days sailing into Galapagos the wind weakened but with one engine on low revs and sails up we did around 6 knots and this was OK. In the night of the 12th May the whole crew were awakened at 23:00 since we were approaching a milestone of the journey - the equator. The wind had died down but we turned off the engine that was running and sailed in silence doing 3 knots. At 23:40 we crossed the equator and celebrated with champagne and cigars. Sailing tradition says you also need a sacrifice to Neptune to guarantee a safe passage through the Southern Ocean. We offered fine items such as swedish knäckebröd and the finest liquorice. Also more personal sacrifices were made - Hampus gave up his hair and got a bad ass mullet while I shaved off the beard i had been having since crossing the Atlantic three years ago, turning it into a nice walrus moustache. 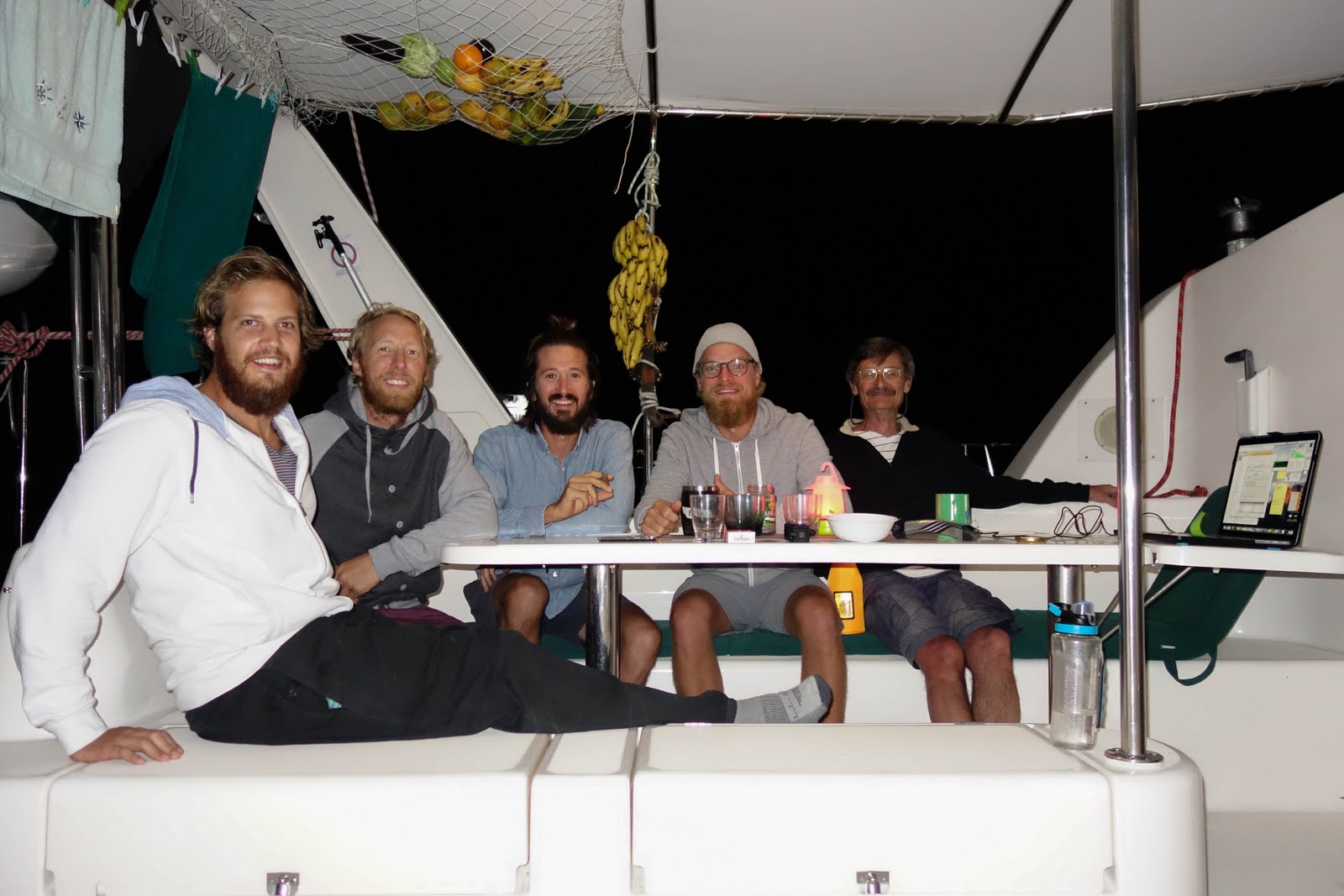 Crossing the equator!
Mullet in the making
Don Pedro

Two days before arrival we had the wonderful experience of having a group of red footed boobies, often 4-5 of them sit on the pulpit rails in front. They seemed to rest there at night and go fishing in the day. One the morning of the last day we saw land at 6 o'clock and the ocean was smooth like a liquid mirror. It made visibility of animals very good and sailing in we saw whales, dolphins, rays doing 360 spin jumps(!), sea lions, turtles, pelicans, frigate birds. We even caught a delicious Pacific Barracuda. Galapagos was welcoming us in the best way possible.