We have now made it to the mighty Galapagos islands! It feels pretty amazing to have sailed here in your own boat, it is definitely one of the milestones of this journey.
The sailing leg here was eventful with the lightning strike and interesting weather and winds, but in the end, the longest leg so far was nice and the spirit of the crew was super good all the 900+ nautical miles here. To be honest none of us were that excited to see land again after more than 8 days at sea. It was a good test before the big crossing to the Marquesas that is coming up next. 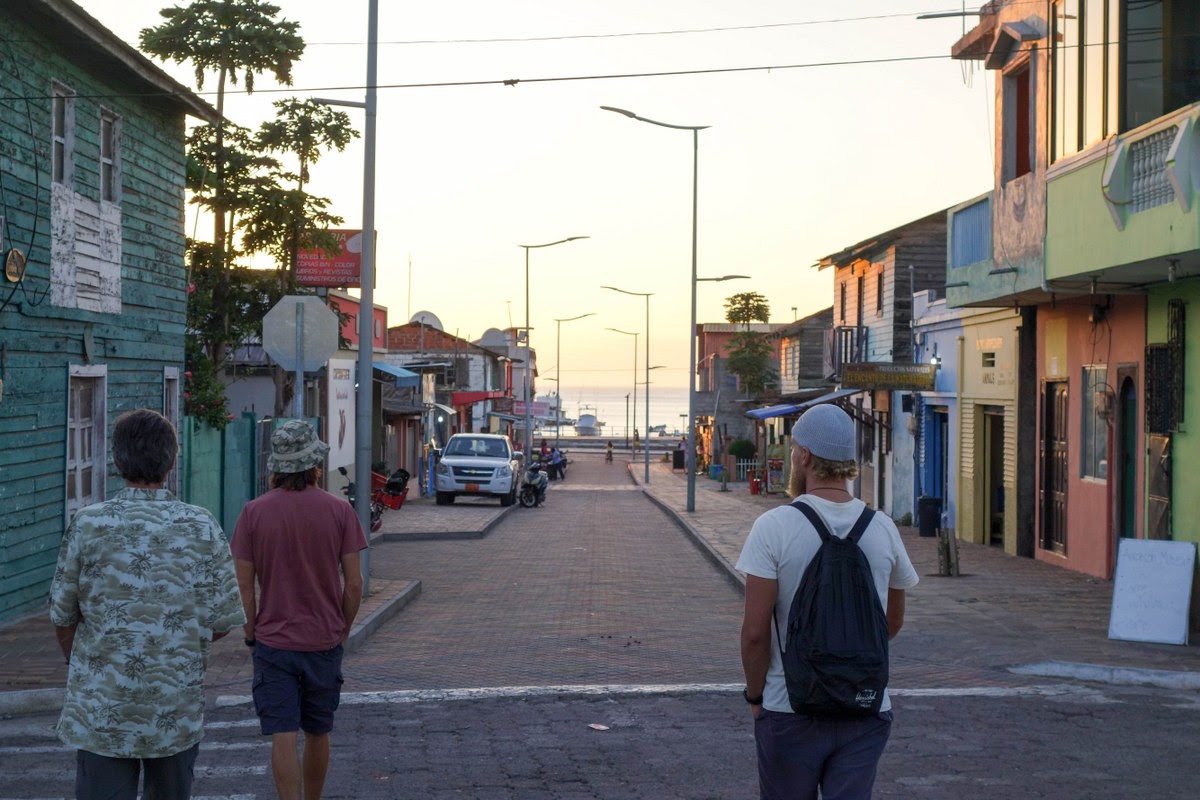 Galapagos map. We travelled in an westward direction from San Cristobal to Isabela. The equator is crosing through the northern parts of the archipelago.

To be allowed to stop at Galapagos is not easy if you are arriving by boat. Just trying to figure out the actual rules is a struggle since they change all the time! You will have to try to find recent information on website forums and talking to other boaters along the way. It was a hot topic among the boats in Shelter bay marina in Panama since many of the visitors were on their way into the Pacific. It turned out you could either make an “emergency stop” and just arrive at one of the official ports and try to get a permit from the port captain on site, in this case you were only allowed to stay at one port and at the most for 20 days if the port captain on duty was in a good mood... The other option was to contact an agent in advance and get a proper cruising permit called “Autografo” which is valid for 30 days and allows you to visit three different ports. In either case you are not allowed to cruise the islands freely with your boat, you are limited to staying at the official ports. If you want to sail to remote islands or bays you need an official guide onboard and there are a lot of extra fees involved.

Since we really wanted to stop here, it’s a once in a lifetime experience, we went for the safe card and got in contact with an agent who set us up with all the permits we needed. According to the information we read on the internet you need to apply for an “Autografo” two months before arriving in the islands, but we got it sorted out in two weeks as we contacted our agent while we were in Panama. We paid $2400 for the boat and its crew of 5 persons, If we would have decided to make an “emergency stop” the difference in total cost would only have been about $500 so we figured it was worth it, and it turned out we were right!

We arrived in “Wreck bay” outside of Puerto Baquerizo Moreno at the island of San Cristobal, the most eastern island of the archipelago. This is the administrative center of Galapagos but only the second biggest town with its 5000 or so inhabitants. When you enter your first port you can expect a lot of officials to visit your boat for a lot of administration and different inspections. The first morning our agent had gathered all the officials and a whole armada of people came to the boat. The customs were there to make sure we did not bring any banned food items, it ended up with a big mango fiesta on Kenobi since we had to get rid of our stash of mangoes we accidentally brought with us. the officials were more than happy to help us eat it all up on the spot, I guess they don’t eat mango that often here. Our hulls were inspected by a diver to make sure we did not bring any seaweed or barnacles from the outside world. If your hull is not clean enough you can get sent out 60 nautical miles straight into the ocean to clean your hull. We also had to get a fumigation carried out on the boat to make sure any unwelcomed skadedjur were put down with the pesticide they filled the boat with. All the officials were very nice and welcoming and the whole process went on very smoothly, not the difficult and DDR style checking in process we encountered in Panama. 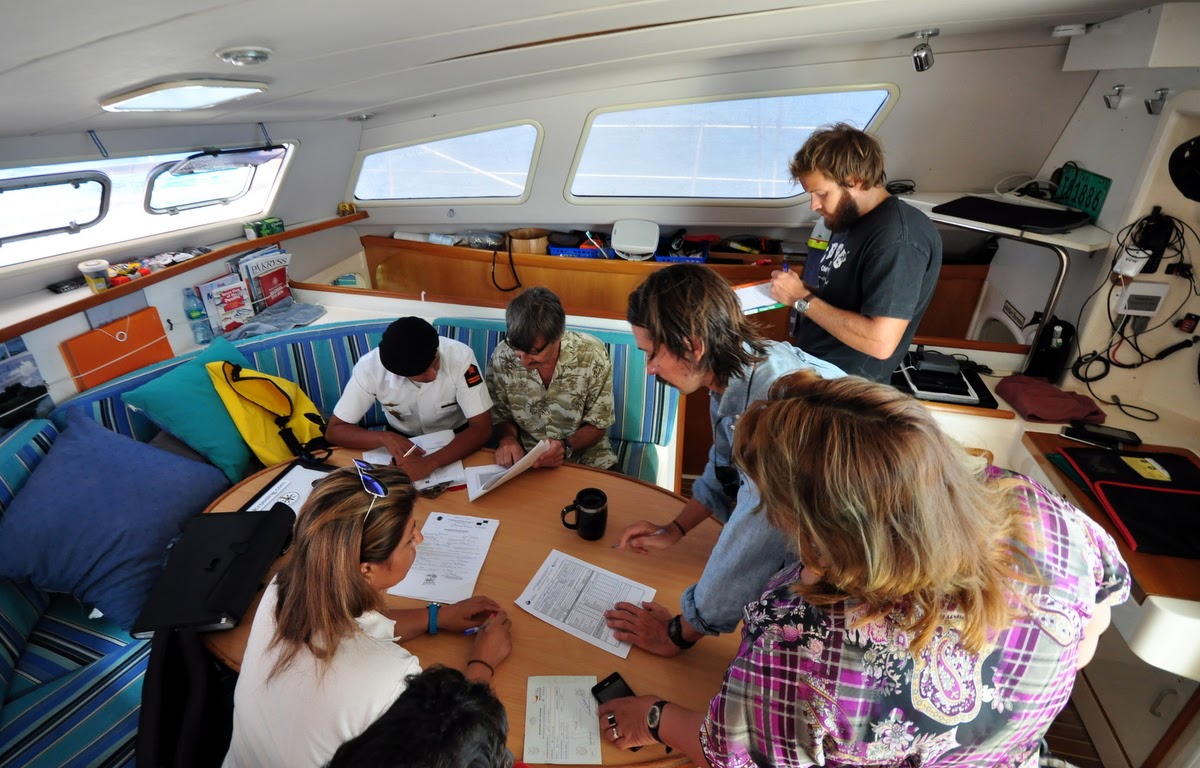 Getting all the paperwork sorted out.

We knew the Galapagos is a place with a lot of amazing nature and animals, both on land and in the water. What we did not expect were all the surfers and backpackers that we met here, we turned out meeting a lot of fun people that we hung out with. We spent more time here in bars and night clubs (yes, there are night clubs in Galapagos!) than we did in any other place we visited so far.

Lindsey and Fiona joined us for dinner at Kenobi.

Of course we did a lot of activities also. The first day we went on a guided tour of San Cristobal with the brother of our agent as a guide. First we visited the top of the highest mountain of the island which had a fresh water lake on the top and was surrounded completely by clouds and fog. Here the frigade birds came to wash their feathers before heading out to sea again. From here the view over then island was beautiful, at least the parts you could see through the fog when it eased up occasionally. Next we went for a great local style lunch at a really cool place in the mountains before heading out to see the giant turtles. The turtles live in smaller separated colonies in the different islands of the archipelago and they have different characteristics depending on where they live. For instance, one kind of turtle have a “horse saddle” form at the neck of their shell to be able to reach the food that is elevated higher up on the plants of the specific place they live in. that’s the evolution theory in practice! We ended the tour on a beach where we went for a snorkel swim with turtles and sea lions, the sea lions are so cool to see both swimming around in the water and chillin’ at the beach. This Galapagos sea lions must be the most relaxed creature on the planet! In this island the sea lions are present everywhere and you get really close to them, they don’t mind people at all. The sea lions sleep in the middle of the main street at night, they hang out at the beach, and they really love to chill on your boat. We had a lot of visits on Kenobi, at first we found it really funny but then we realized they made a mess on our white Jelcoat so we had to fortify the back of the boat with fenders and lines to keep the now unwelcomed visitors away. 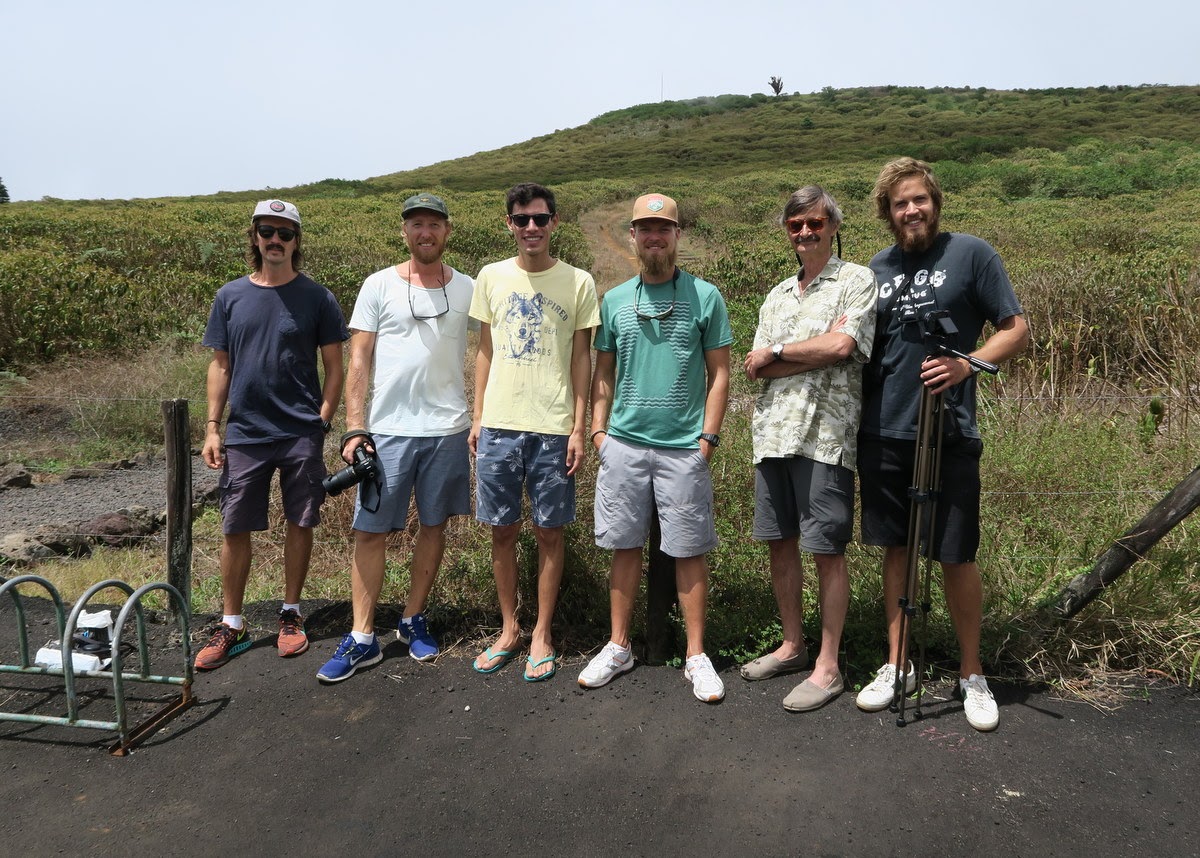 Extended Kenobi crew and guide at the top of San Cristobal island. 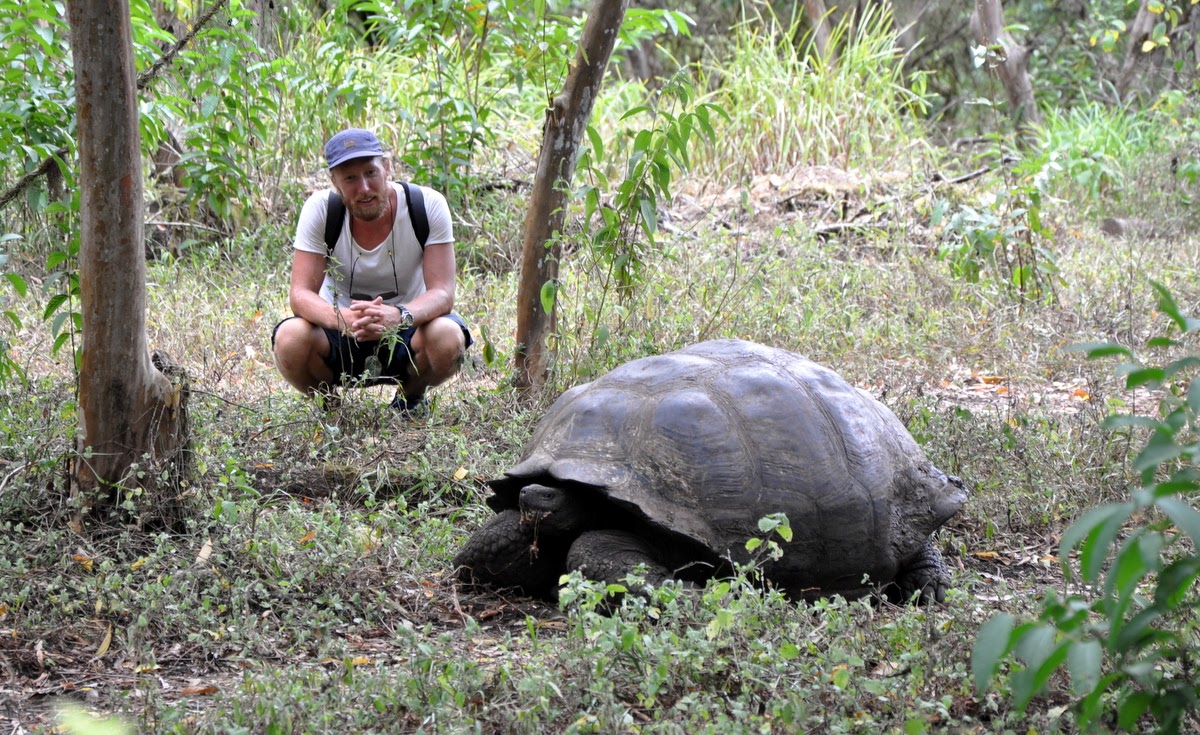 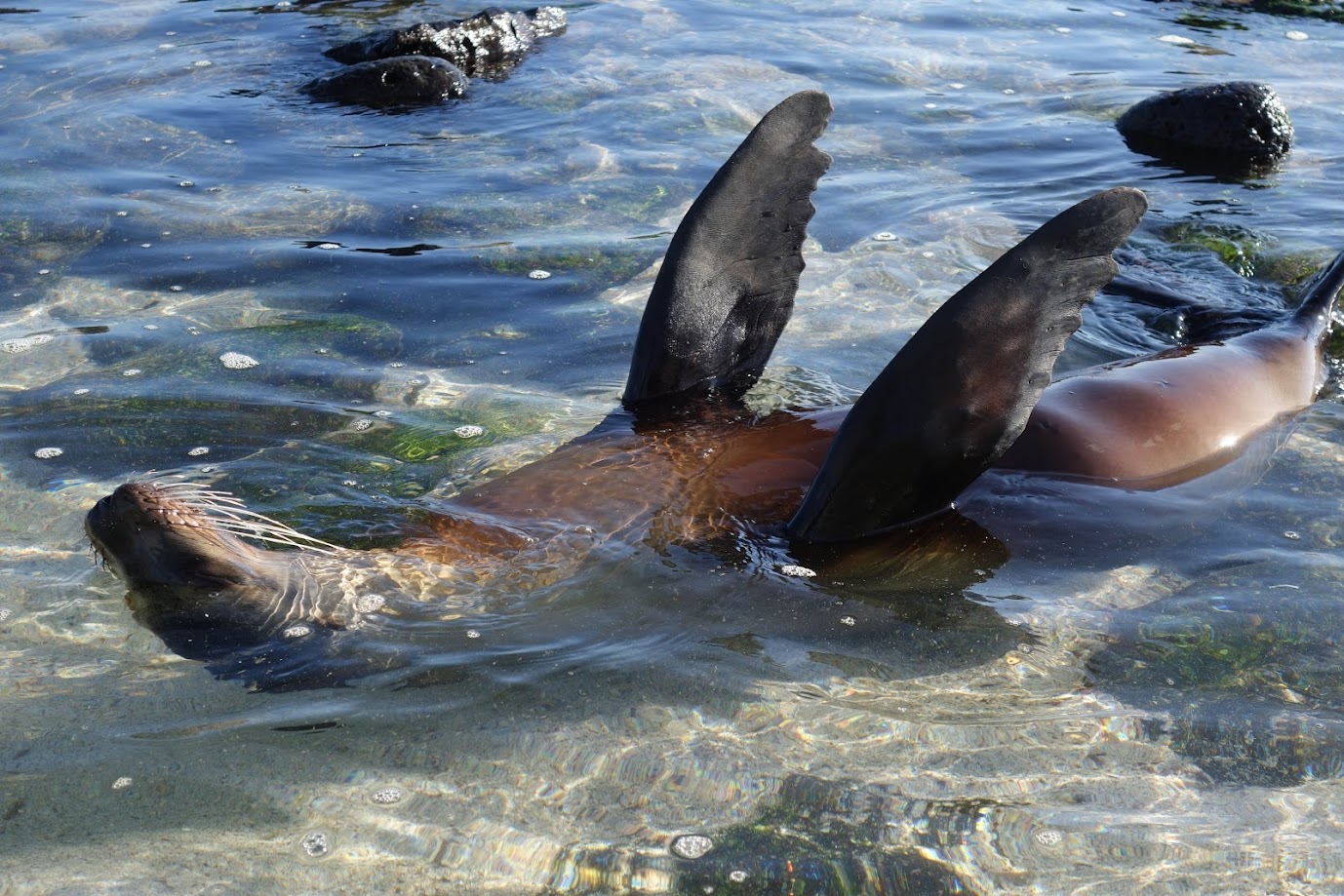 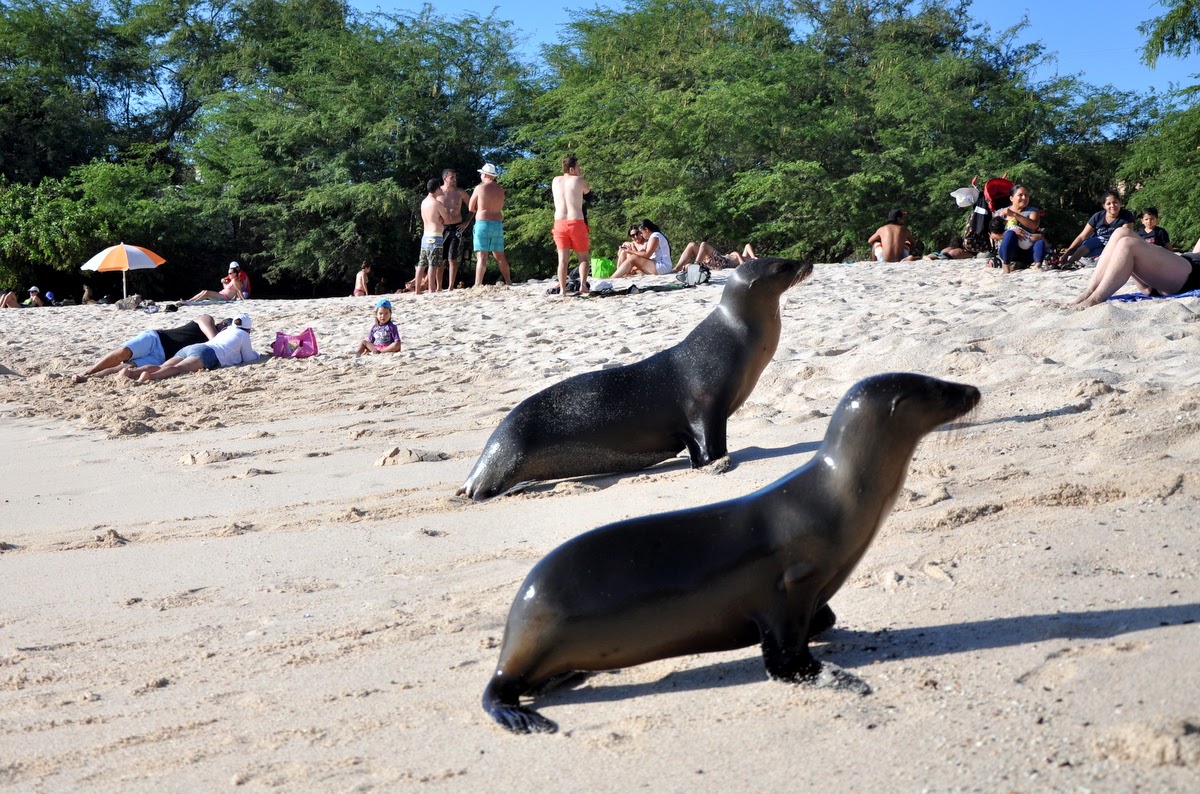 Not your ordinary beach neighbours.

In the anchorage at San Cristobal we met some old acquaintances from our time in Panama. During the passage here we had some satellite communication with the boat “Whateverworx” who were a couple of days behind us. This is the boat of Glenn the Kiwi we talked about in our blogg post from Panama. On this boat there are three people, Glenn is the skipper and his crew consists of his surfer friend Peter who have given us a lot of surf tips for our trip in the Pacific, and Martin from Lithuania who they picked up in Shelter bay marina. Martin is trying to travel the world as a crew on different sailing boats, it is cool that you can get around the world this way. We welcomed them to the anchorage in Wreck bay late one evening by meeting them up with our dinghy and showing them where to anchor up. We spent some time with them here and Glenn, as an old “motorhead”, had a motor session with us showing us his best tricks and tips. They were in a bit of “hurry” so they only stayed for a week before continuing to the Marquesas, hopefully we can catch up with them there. One morning Andy the German solo sailor showed up at the anchorage, he was only in to buy a whole lot of bananas for his leg to Marquesas. He came in late at night and left the next afternoon to avoid the checking in process and all the fees. Big up to this guy for making the trip he had been dreaming about for a long time, he was so happy to finally set sails for Marquesas. “Fair winds” to Andy on his four weeks long leg!

Diving was one of the most popular activities here and Simon decided to do a PADI open water license course, and he passed! The others did some maintenance on the boat and hung out with our new friends we met here while Simon did diving sessions during the days and studied theory at night. With Simon a licensed diver we went on a dive and snorkeling trip to Kicker rock, a big rock that arises straight from the sea just of the coast on the west side of the island. The rock has a big crack straight through it with a 15m deep channel that houses a lot of marine life. We saw smaller sharks, a lot of rays and turtles. Unfortunately we didn’t see the famous hammer head sharks that usually hangs around here. 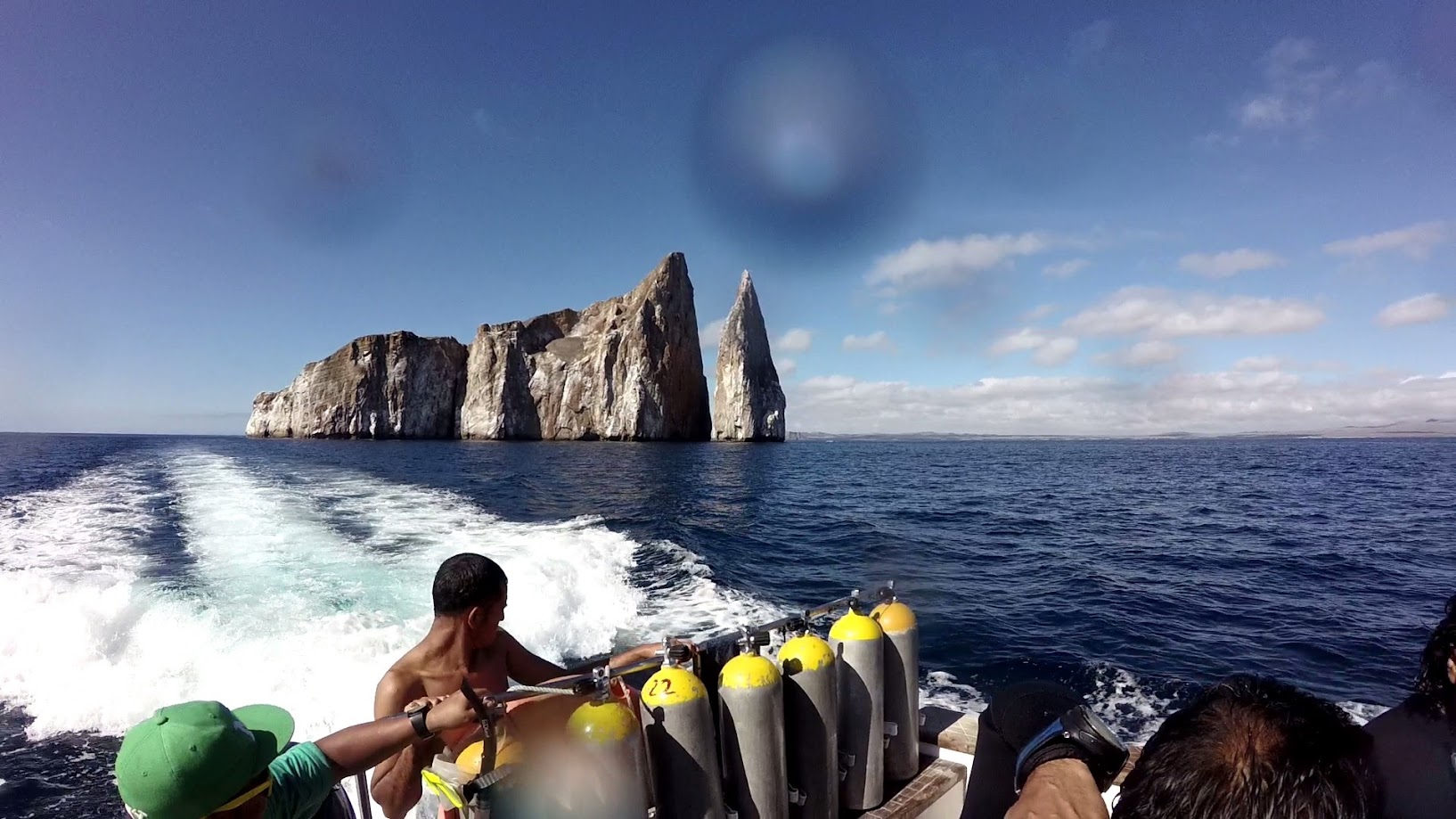 Diving and snorkeling at Kicker rock. 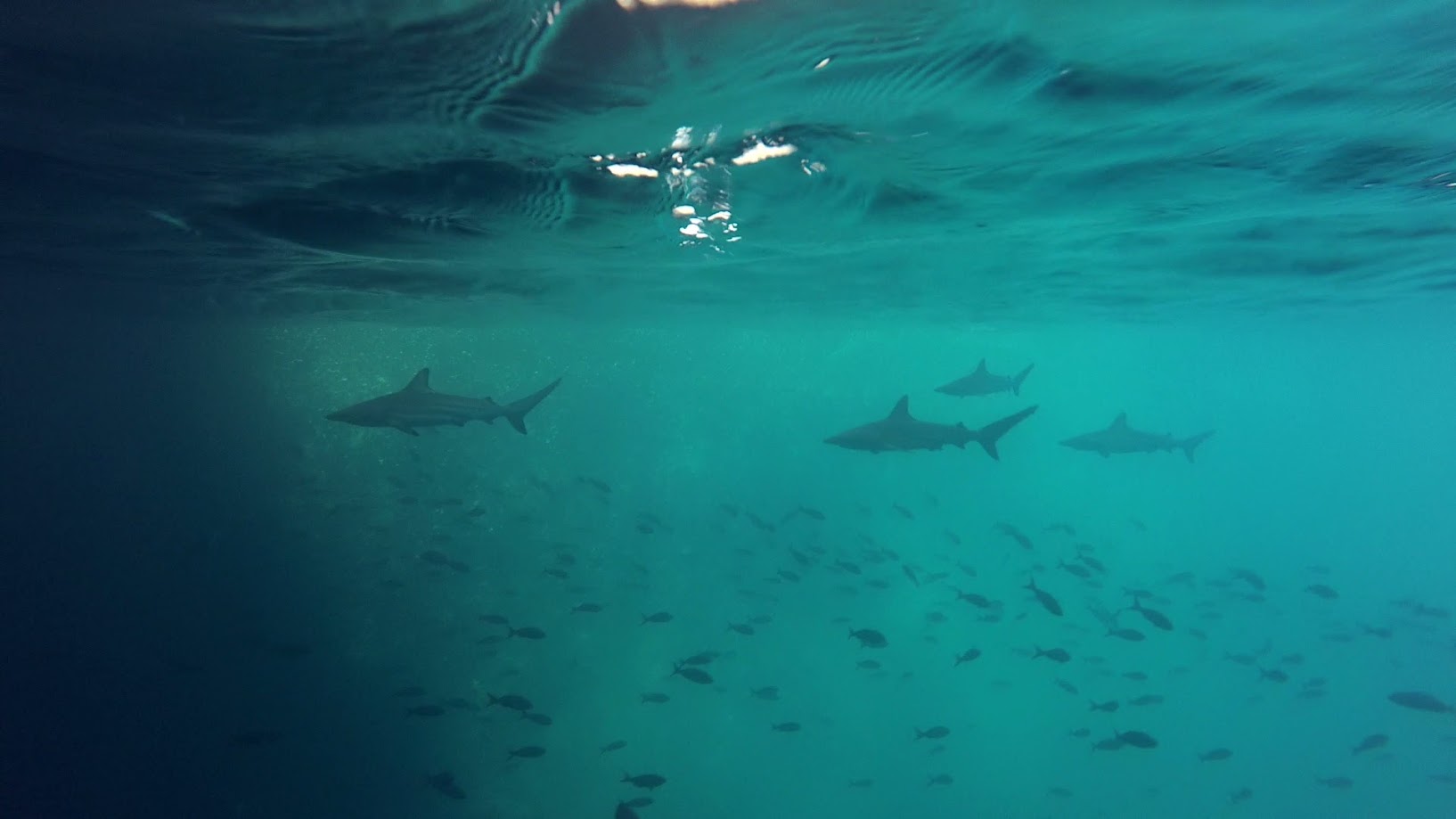 Lots of smaller Galapagos sharks around. 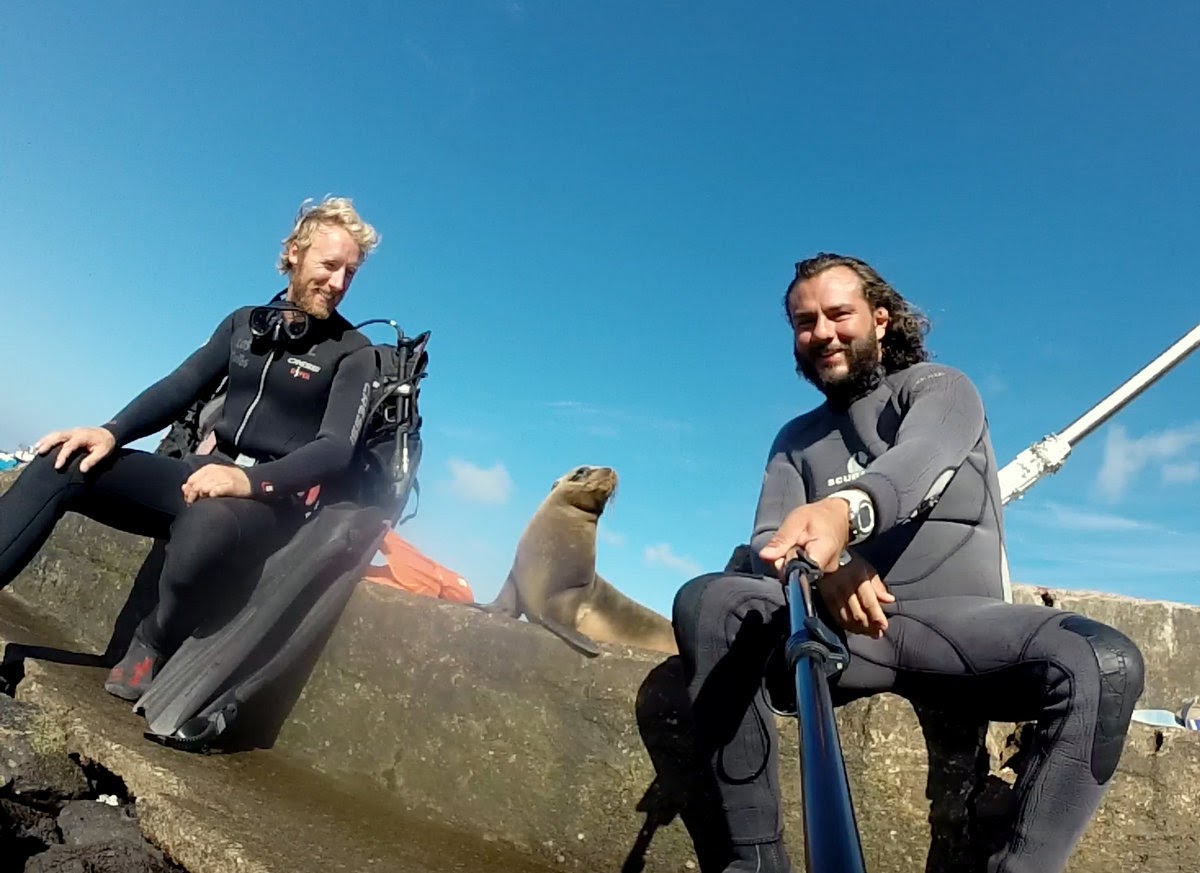 We stayed here for a couple of days more. We did some work on the boat, as always. Getting help with fixing our fried electronics turned out to be impossible though. The agent set us up with an electrician from the coast guard but he could only confirm some of the problems we already knew about, we could forget about getting hold of properly skilled technicians and spare parts at this island. We really wanted to get started with our surfing now that we have the surf boards onboard. We took a surf lesson with a really cool surf couple that runs Kanton Surf in San Cristobal. They are really dedicated to surfing and work a lot with the local kids to make sure they have proper training and support so they can compete with the kids from the mainland Ecuador. We went to a point break close to town called Tongo reef, the break was at a really rocky beach and you had to make sure you skipped the wave (if you could catch one) before hitting the rocks… This day the swell was not too big but good enough for us newbies, this was basically the first time “surfing” for some of us. For sure we are going to do some more surfing before leaving the Galapagos, there are supposed to be great (and easier) beach breaks in the other islands we will visit. 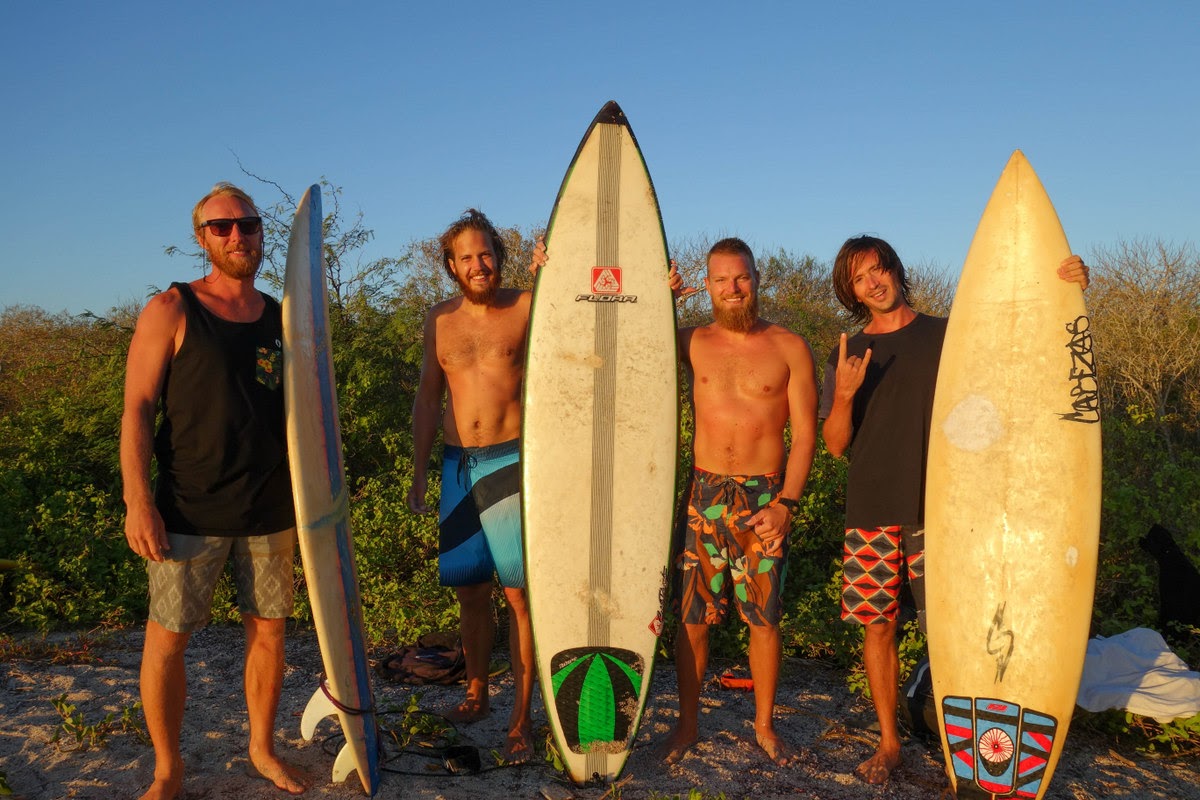 We left San Cristobal on Wednesday the 25th of may for the island of Santa Cruz which was our second stop in Galapagos.

/Hampus and the rest of the crew