What a feeling it is to have your boat in ship shape condition, fully loaded with provisions and fresh produce and setting course straight out into an ocean. After a month on the islands of Galapagos we were all really looking forward to some time on the ocean again and you could feel the excitement and anticipation in the whole crew. This is the big crossing of the trip and one of the longest anywhere in the world, 3000M all the way to Marquesas in French Polynesia. Should take us about three weeks so lots of quality ocean time to look forward to! As always for me one of the biggest attractions about the sea is the fishing, which I will focus on here. Along with some sailing and some food.

Galapagos being the amazing hub of animal life it is I really wanted to start fishing right away to see what we would catch. As we motored out of the bay to get out of the lee of Isabel's coast we set sails and the three fishing rods went in. 15 minutes later comes the first bite! What at first looked like a smaller wahoo turned out to be a “sierra” (according to my book Sportfishes of the Pacific), never heard of it before but a nice fish resembling a Spanish mackerel and with yellow dots along the sides. As we’re gutting the fish, the rod goes back in and 15 min later the same rod gets another hit! This time a “spotted rose snapper” of about 1,5 kg, also a new species for me and I’m pretty sure it’s a very unusual catch on a surface trolling lure. 30 min later we are finally done cleaning these two fine fishes and filleting the sierra. Then we get a big hit, line is flying out of the reel as the fish is going deep into the ocean - definitely a big tuna! It was a truly enjoyable 45 min fight spent sitting down on the chair at the side of the fore deck pumping and retrieving the fish and getting completely exhausted in the best way possible. Three awesome fish - Galapagos grand slam! The yellow fin tuna was 132cm long, approx 30kg (electronic scale broken) and we now had a lot of meat to take care of. We spent the day sailing 9kn on light seas, filleting and taking care of our catch. About 6 kg was cut in strips, salted over night and hung the next day to dry. Then another 8 kg or so was boiled in sea water and preserved in vinegar. Of course we also left a big box of fillets in the fridge for the all-famous Tuna à la Kenobi. While working on this we satisfied our appetites with some sierra cevice for lunch and for dinner the snapper got baked in the oven together with a bunch of fresh herbs from Troyas’ finca - delicious. What a start of the crossing! Please stay away from the keel! The tuna, almost ready for the gaff 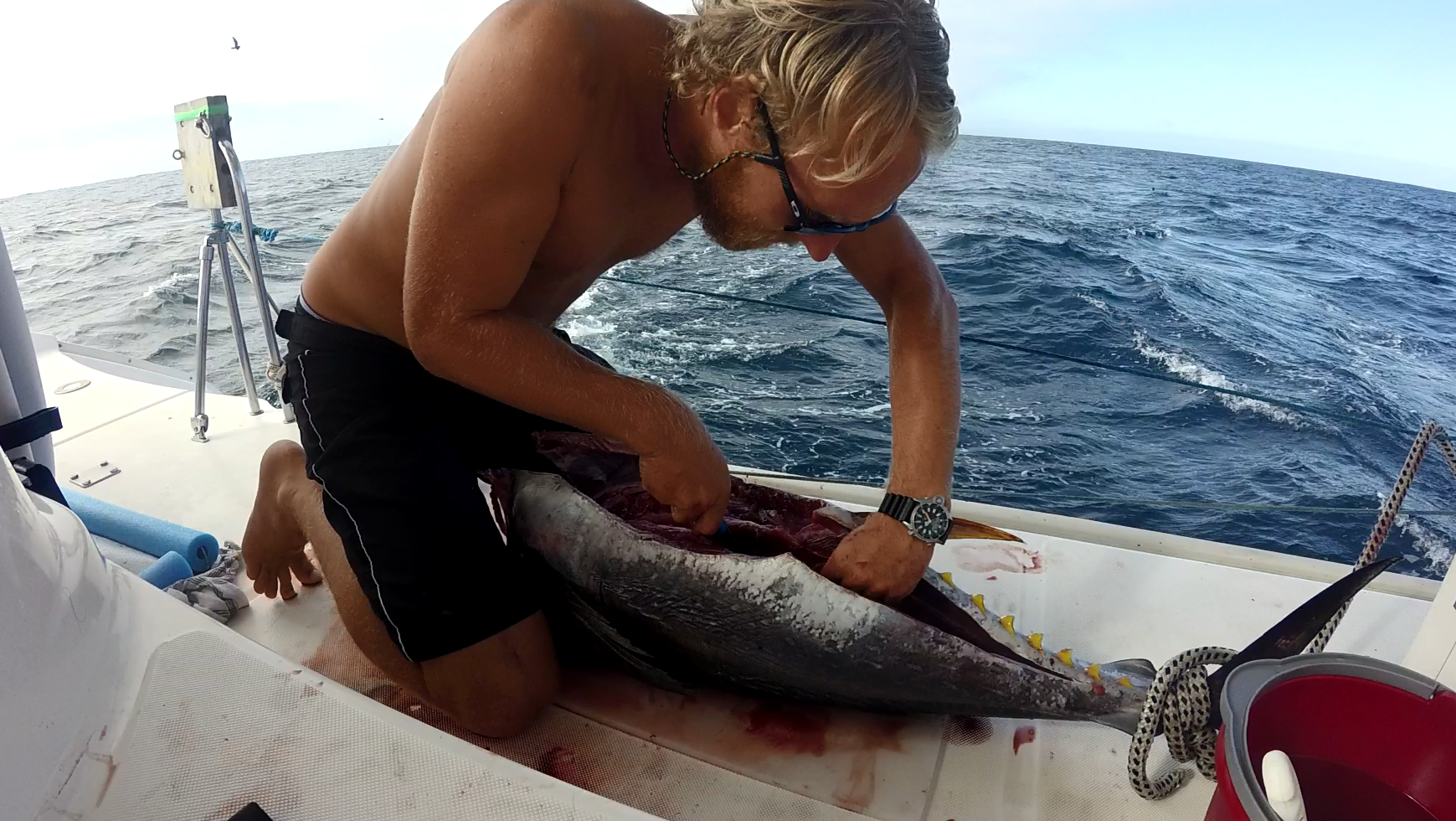 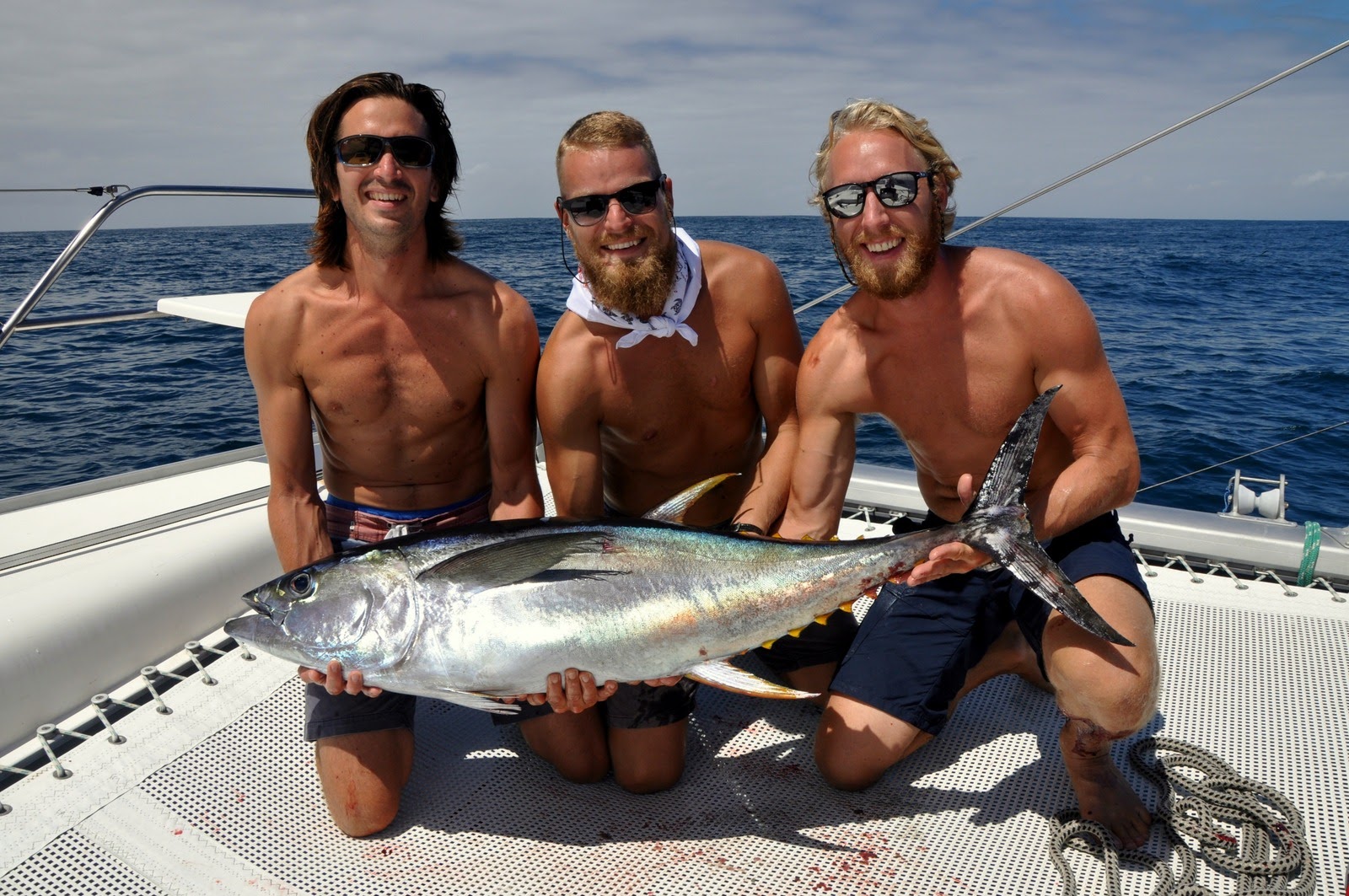 Even the wind was better than we could have hoped fore. Didn’t experience any of the forecasted doldrums around Galapagos but could sail on a beam reach straight on target for the first couple of days. The high speed and the fact that we were full stocked on fish made us give the fishing rods a rest for a while.

A couple days later we still had strong wind but were struggling to keep our course as the wind backed to the east. This was in accordance with the forecast and I became a bit gloomy that we would have to start tacking downwind as we cannot run straight downwind with the main and genoa up, the genoa gets shaded and starts flapping. In my gloominess I calculated that a 10 degree deviation from our ideal course, the rumb line, would mean a many days more increase in the length of the trip. We struggled to keep the course as best we could but were gradually getting too south of the rumb line. The wind was usually between 15-20 knots, sometimes a bit more. Sometimes it veered to the south and we could head a bit more east, improving our track that dragged to the south.

On the night of the eight day we get hit by some squalls. Full sails are up and we’re sailing 10 knots in the rain! Navionics on the iPhone is constantly tracking us to get our daily sailing stats and now we recorded a new top speed of 18.1 knots. For the coming days the wind stays above 20 knots and we put a reef in the main and the genoa to slow down and be able to get some rest. The roar you hear in the cabins when the boat surfs in the big waves is impressive but makes sleep quite hard. Although, if you’re tired enough, you can sleep. Anyway, on day 8 we reefed and started fishing again in 7 knots of speed. Simon soon lands a 2kg dorado that he saw jumping for the lure behind the boat. Nice with some fresh fish agin. Just 15 min later we get a big strike and the enormous splashing behind the boat indicated a big billfish. It jumps every direction and comes flying by in the surface just behind the boat. It was a huge blue marlin, maybe 100 kg, and seeing it close like that really sent the adrenaline pumping! A much more lively and unpredictable fighter than the tuna, so strong and fast that I didn’t have a chance to keep pressure on the line. After jumping past the boat I reeled in the slack line and could immediately feel the fish and my favourite lure was gone.

On day 10 the wind weakens, we set full sails and still only go 5 knots, feels like were standing still. But just after lunch the quiet is disturbed by a big hit, finally we catch a wahoo! 139cm long, should be around 20 kg. This is really the new favourite fish, firm, light meat and great taste. The wahoo sashimi with soy and wasabi we had that day is some of the best things I’ve eaten. Wahoo on the hook!

The next day the wind is back and were enjoying some good 9+ knots speed again. It’s a bit too fast to be comfortable but now we want to see how good a number we can get for our 24h distance measurement so we don’t reef for the night. The boat roars in the surf, propellers spinning away, and the next day at 17:00 we can record 218 sailed miles, 210M distance to target made good! We feel rather proud of ourselves but immediately take in a reef to go back to more comfortable sailing.

In these calmer on board conditions we were fishing again and got another hit from a huge marlin. To my horror it did exactly what the last one had did - it escaped us by ripping the line and stealing the last big one of our precious 2socks lures. Aaaargh! Something had to be done and after rereading about fishing rigs in the bible of fishing, The Cruisers Handbook of Fishing by Scott Bannerot, I followed the 17-step process to tie Bimini Twist leaders on all three rods. It creates a 2m twisted loop of line in the end that gives twice the line strength and hopefully more resistance to the powerful rushes and jumps of any coming marlin in the future. Game on, marlins.

Soon we get more calm the we asked for. From day 15 the wind weakens and fluctuates between 14 and 8 knots. Most of the time from the east but sometimes a bit south or north so we gybe as best we can to sail as straight as possible towards our destination. Sometimes frustratingly slow and on a poor course. We take the decision to try and raise the gennaker - the huge light wind sail that is supposedly great for these conditions but a sail we have never tried before! I was really expecting something to go wrong the first time but it didn’t, sail went up, it’s enclosing “sock” hoisted and it unfolded like a big balloon in front of Kenobi. The first time we did it with the main up to be able to shade the sail if something went wrong. However the main kept us from keeping course so we soon decided to take it down and could now run pretty much straight downwind right on target! This is prefect as the next days bring some very light winds where we only do 3-4 knots with the gennaker. Calm seas, steady, slow pace, warm sunny weather. We all become affected by this and calm down ourselves. It’s interesting how the conditions affect your own mood to such a large extent.

On day 17 the wind increased to about 18 knots in the night and we were doing 7-9 knots, a bit over our comfort zone for the gennaker, specially in the dark. We got it down after some effort, not easy to pull the sock down and “fold” the sail when it is filled by a strong wind. We carried on with only genoa instead in 5 knots speed and on course. The next two days we mostly sailed gennaker in daytime and genoa at night to keep the peace aboard.

For the final 200M stretch we kept getting hit by squalls every two hours or so making it hard to use the gennaker. So we went slow swith only the genoa, 3-4 knots when calm and when the squall hits we race away in 9 knots. It gave us enough speed to make landfall on the 21st day, just hours after our friend Erik arrived from Sweden, talk about timing!

Reaching land on my sail across the Atlantic three years ago turned out to be a bitter sweet milestone of the trip. It was fantastic to have successfully crossed an ocean on the little 27 feet Albin Vega I sailed then but it was also the end of True Adventure for the trip - the coming months were spent leisurely doing day sails in the sheltered waters of the Caribbean islands, staying at each place a couple weeks. Rum punch, provisions and boat facilities readily available everywhere I went. Doesn’t sound too bad right?? It really wasn't but the days were in the end all very similar and I was missing the excitement of the first half of the trip. Therefore for this trip it has been a stated goal to always have an adventure on the horizon. This is certainly true now, before us lies some of the most beautiful and remote islands of the world, challenging sailing and hopefully some really great fishing. 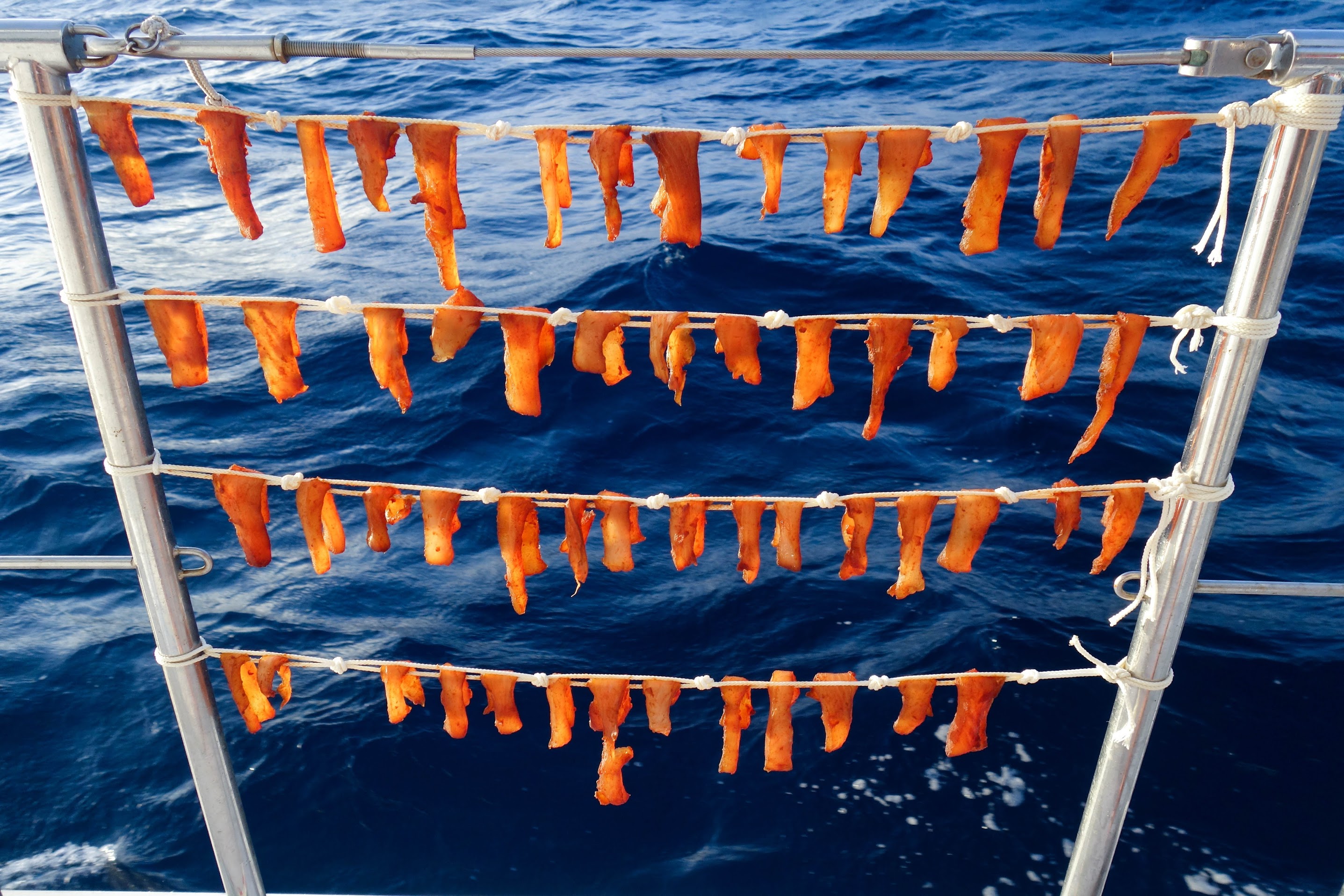 Wahoo marinated over night in soy sauce and sriracha, hanging to dry. Was completely dry in two days. 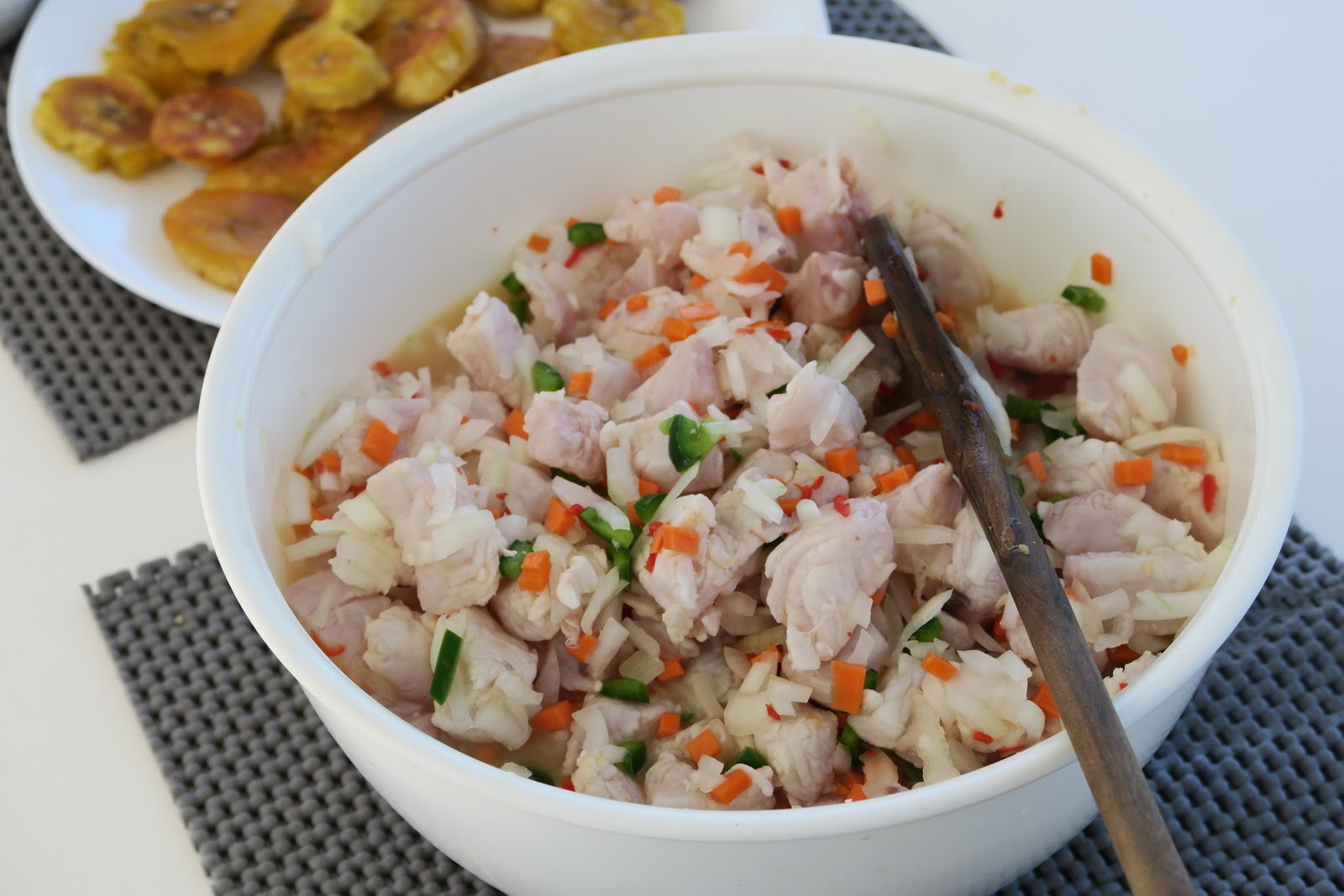 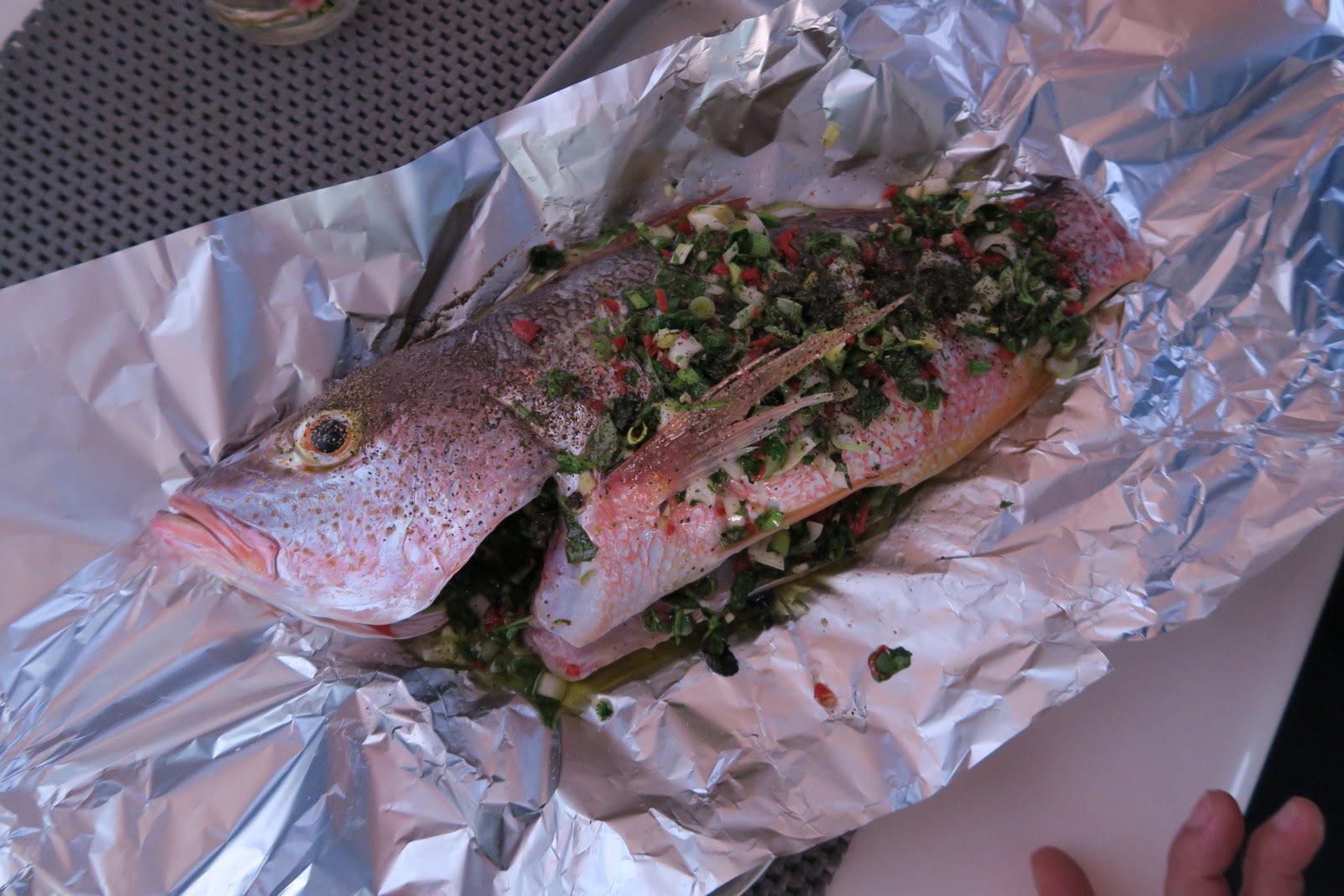 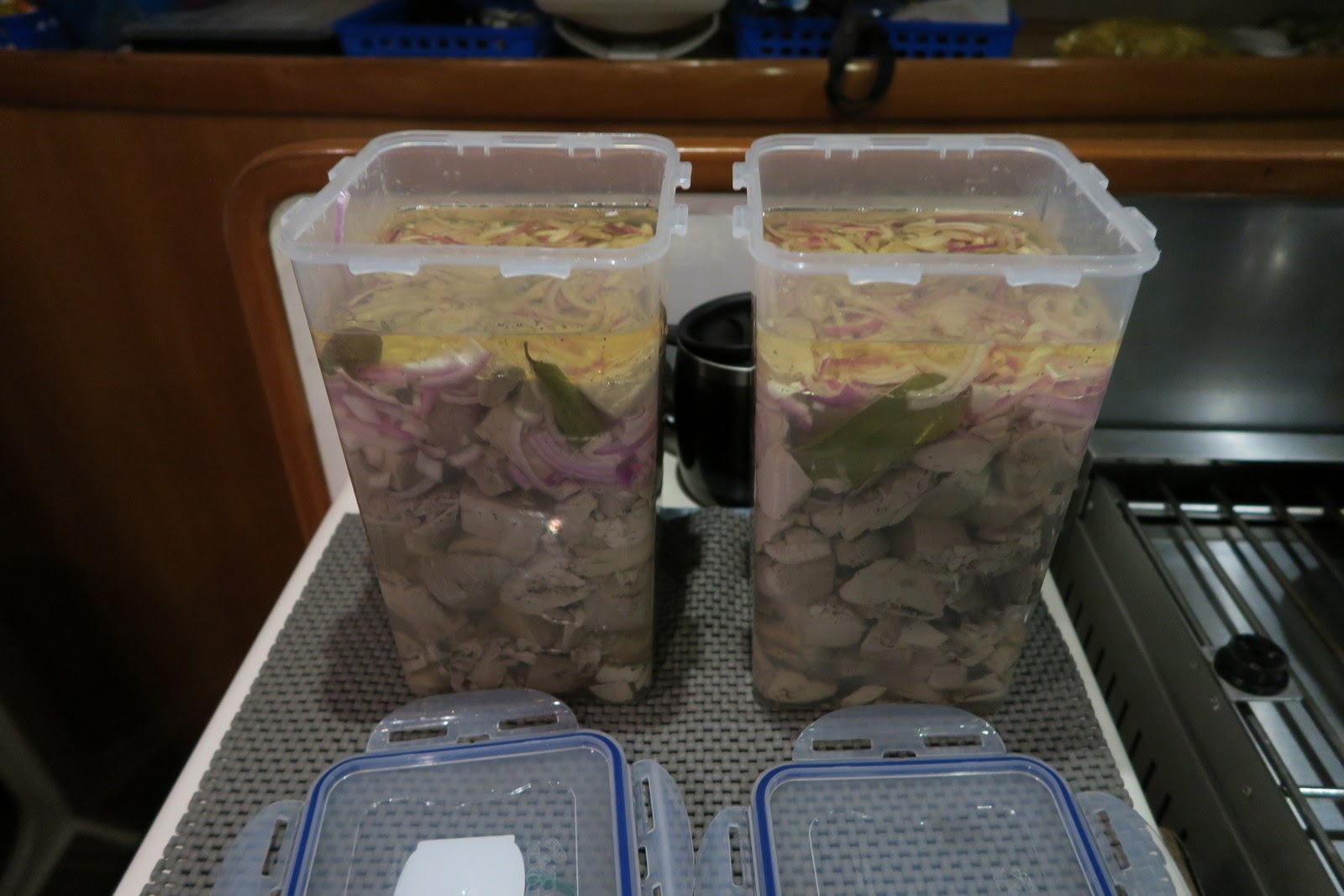 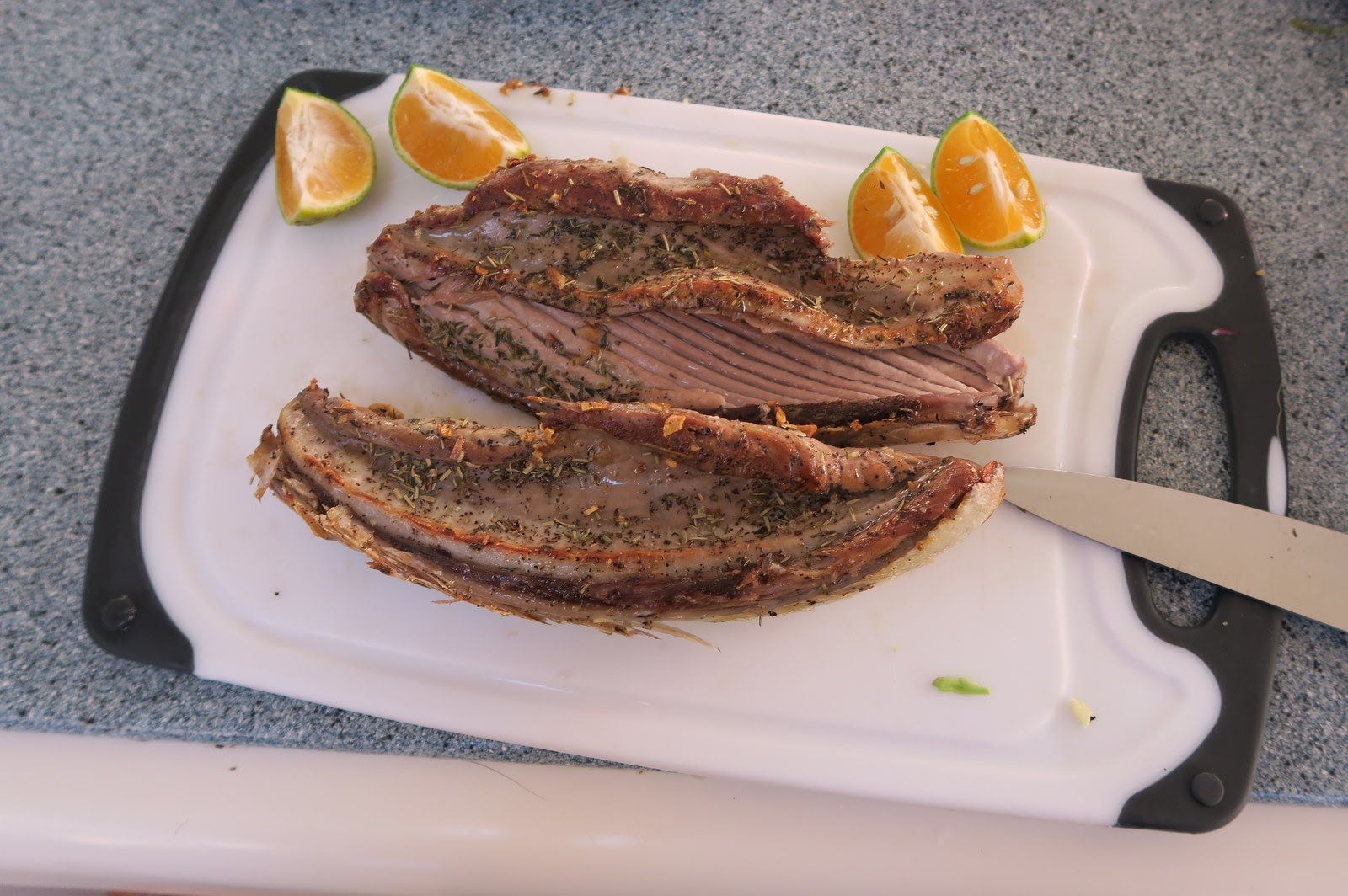 Ventresca - the delicious belly part of the tuna 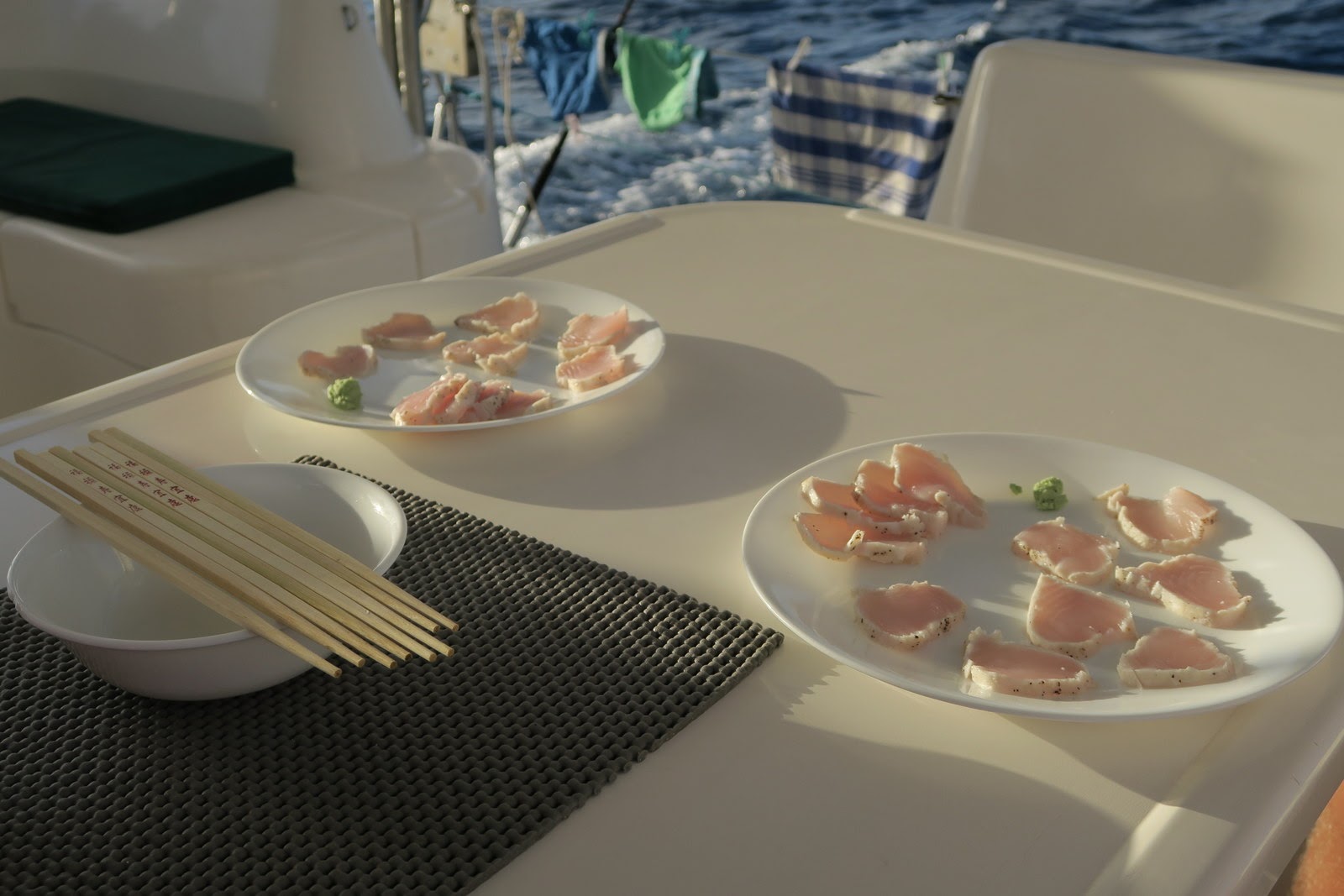