Makemo - fishing with the sharks

After Raroia came Makemo, another atoll reported to have some very beautiful anchorages, a little bigger village and from what we’ve herd - ciguatera free. No ciguatera-toxic fish mean we were finally free to go hunt with the spearguns, something we hadn’t dared in Raroia.

The way there was only 80M but to get slack tide timings correct for exit and entry into the atolls in daylight we had to do it as a slow overnighter. Pulled anchor at 14:00 and motored though Raroia lagoon towards the pass on the west side. The sun was just in our direction, causing a glare in the water making it hard to spot the coral heads in our path. So we had to tack our way down and keep a good lookout. Came to the pass one hour before slack and exited in the outgoing current giving us an extra 3 knots. Outside we rolled out only a small piece of genoa but still did 5 knots - too fast. We had 20h before slack in Makemo. So we reduced sail to about napkin-size and bobbed along in actually quite unpleasant seas. Only small waves but they came from the side and from everywhere and made Kenobi jump all over the place. Couldn't even place a cup of coffee on the table - the horror! It was mostly annoying because we were going so slow. Got the timing right and arrived in Makemo 9:10 the next day, 1h before our calculated slack and there was no current at all.

Once inside the atoll we decided to stop in the village to double check the ciguatera situation. Ciguatera is a food borne illness created by a toxin made by marine plankton. These plankton live in coral reefs and are eaten by herbivore fish that in turn are eaten by bigger predatory fish and it all keeps accumulating until a human eat the biggest fish. So the smart thing to do is stay away from larger fish when fishing near coral reefs. Also for some reason only certain fish in certain locations are toxic, only by asking the locals you get to know which fish are OK (or you can try the tip from The Cruisers' Handbook of Fishing - "if you happen to have an expendable mammal on board, feed it some of the fish first and wait"). Luckily all the people we talked to could confirm ciguatera-freeness, but some warned us of a certain type of snapper that should be avoided - onespot snapper (Lutjanus monostigma). Great news, me and Simon especially getting a big grin on our faces thinking of all the spearfishing we will do!

We also did some provisioning in the village, we were able to find some fruit and veg (all is imported from Tahiti and super expensive, but we can’t eat only coconut…). Just finding freezers in the store felt luxurious and we bought frozen hamburgers and broccoli. Stopped by the boulangerie to fill up with baguettes. We found most people we talked to spoke really good english and everyone was very helpful and nice. Many had lived in Tahiti, Cook Islands and one girl who was a mormon had lived in the US. The people here had a different vibe than their Polynesian neighbours the marquesians. They seemed a bit more cosmopolitan and trendy, you can tell Tahiti is close and has a lot of influence. The town felt more modern and well kept, Hampus even announced this was a place where he could live! 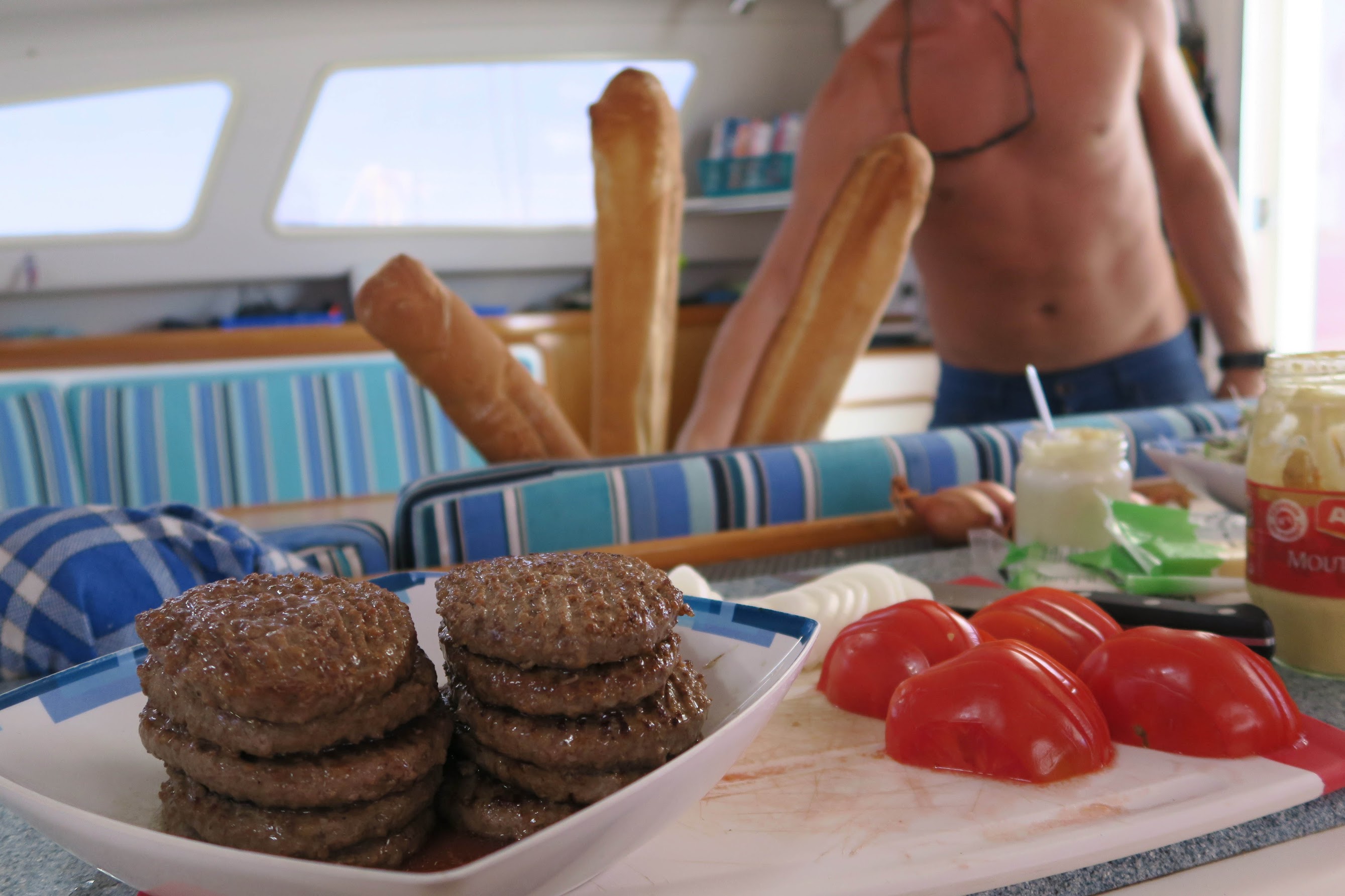 A rare luxury on Kenobi 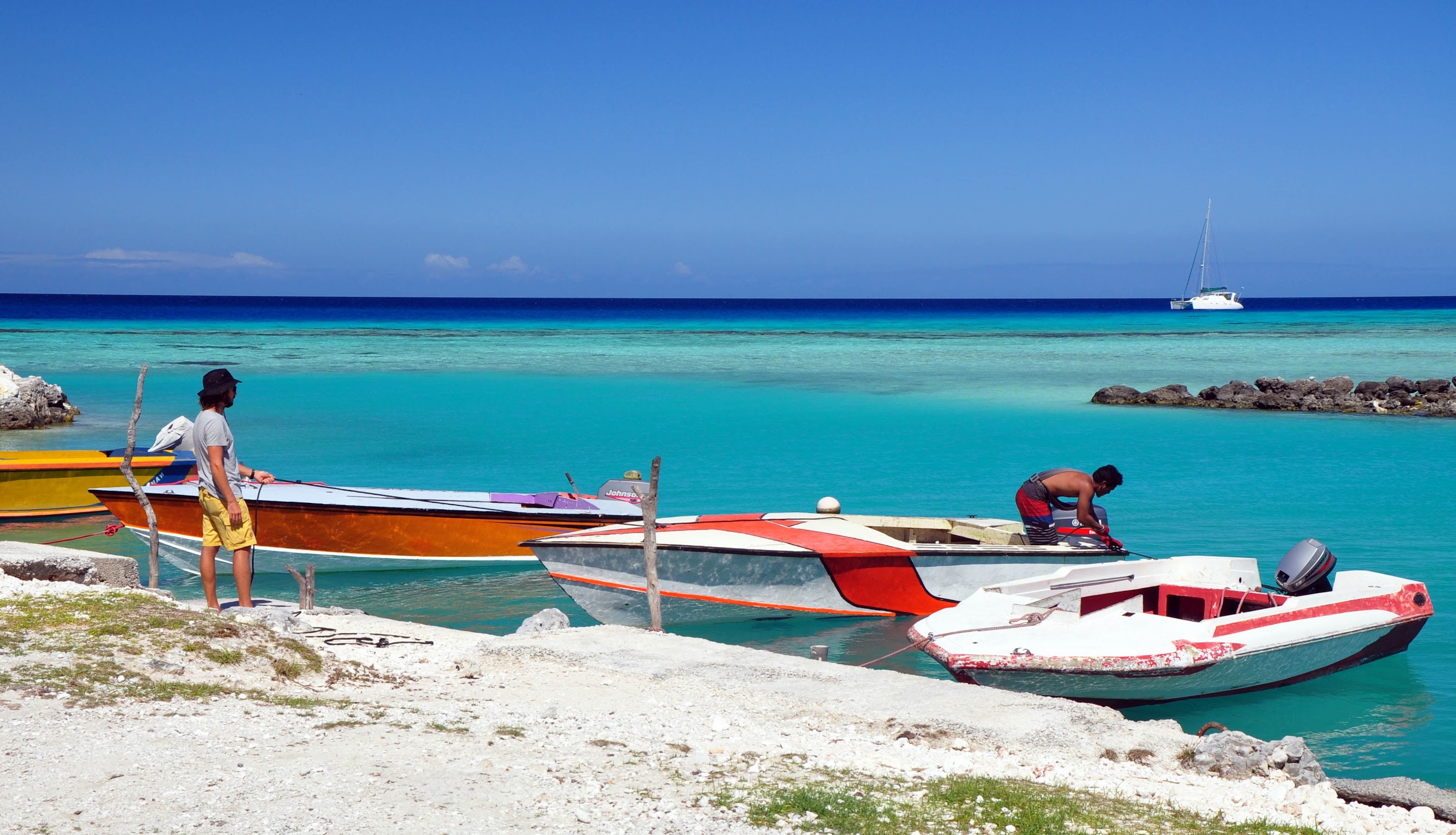 Helping a local fisherman tie up, good opportunity to get the latest ciguatera info. Kenobi at anchor in the back!

After a stop outside the Post office to pick up the VINI wifi-network we pulled anchor and continued to the SE to find an anchorage. Another picture-perfect motu in front with a sandy beach and some coconut trees. You’ll have to look hard to find a spot here in the Tuamotus that is not a 10 in tropical beautifulness. As usual the anchoring was in clear water, sand bottom and scattered coral heads. Now we have a routine to always have a snorkeler in the water to find a good spot between the coral heads. Both in order to find a spot with good holding and also to try and avoid any damage to the coral.

It was a good spot and we snorkelled and spearfished some groupers and parrot fish. One night we also tried a new form of fishing - lobster picking. To catch them you wade at night in the intertidal flats on the seaward side of the reef. Here it’s about knee-deep and you need some good shoes to walk on the sharp coral. The idea is you use a strong flashlight to find the lobster, it gets paralysed by the strong light and you just pick it up. Easy! Not so easy it turned out, the waves rolling in made it hard to see the bottom and it was pretty exhausting just wading along, balancing on coral rocks. After about an hour we were about to give up but then Hampus called out he got one! A nice big one too, light brown and blue in colour. We put it in a bucket of water and had it for dinner the next day.

Makemo is quite long, some 35M, and it’s possible to sail all along inside the lagoon, from the pass where we entered in the NE to the NW side where there is another pass to exit the atoll. On the way there we stopped on the north side in a beautiful anchorage, where a coral/sand bank extended into the lagoon, giving shelter from the SE swell. The snorkelling here was nothing special, unimpressive, mostly dead coral (yes, we are getting spoiled) but the shore had a huge beach with some small campsite set up, a table, fireplace and there were some coconut trees perfect for hanging our hammocks. We decided to do a Camp Day and brought food, beach tennis gear, a kite, spearguns, hammocks etc and set up camp. It was us and tons of hermit crabs on the beach, all going crazy eating the coconuts we had opened. In the evening we made a fire using coconut husk and leaves, and some dry tree trunks were sawed down. We grilled parrotfish, emperor fish, a big clam and pinnbröd - “stick bread”, just a dough made of flower salt and water that you coat sticks with and grill. Tastes like pizza crust! 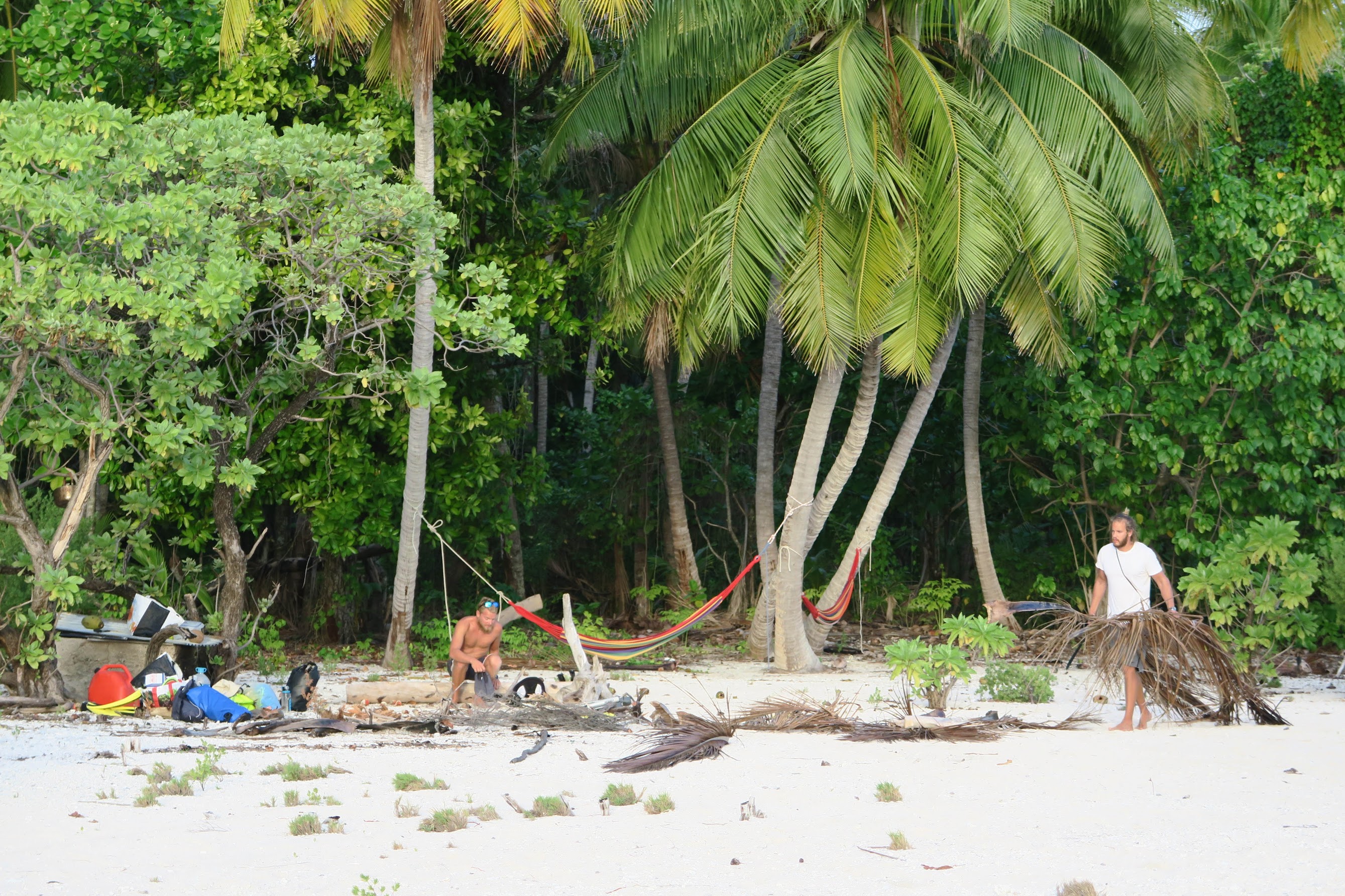 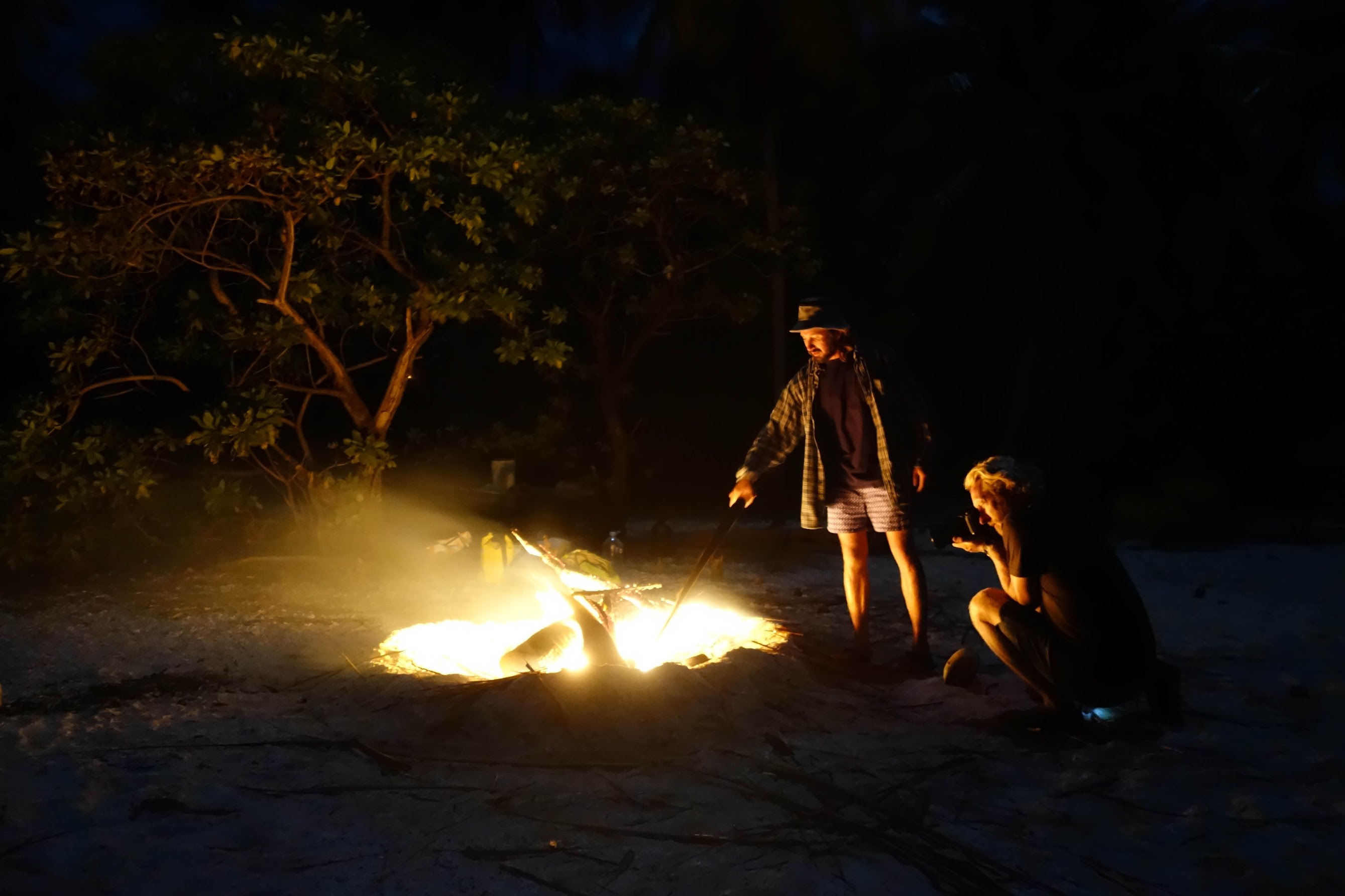 Getting the grill ready 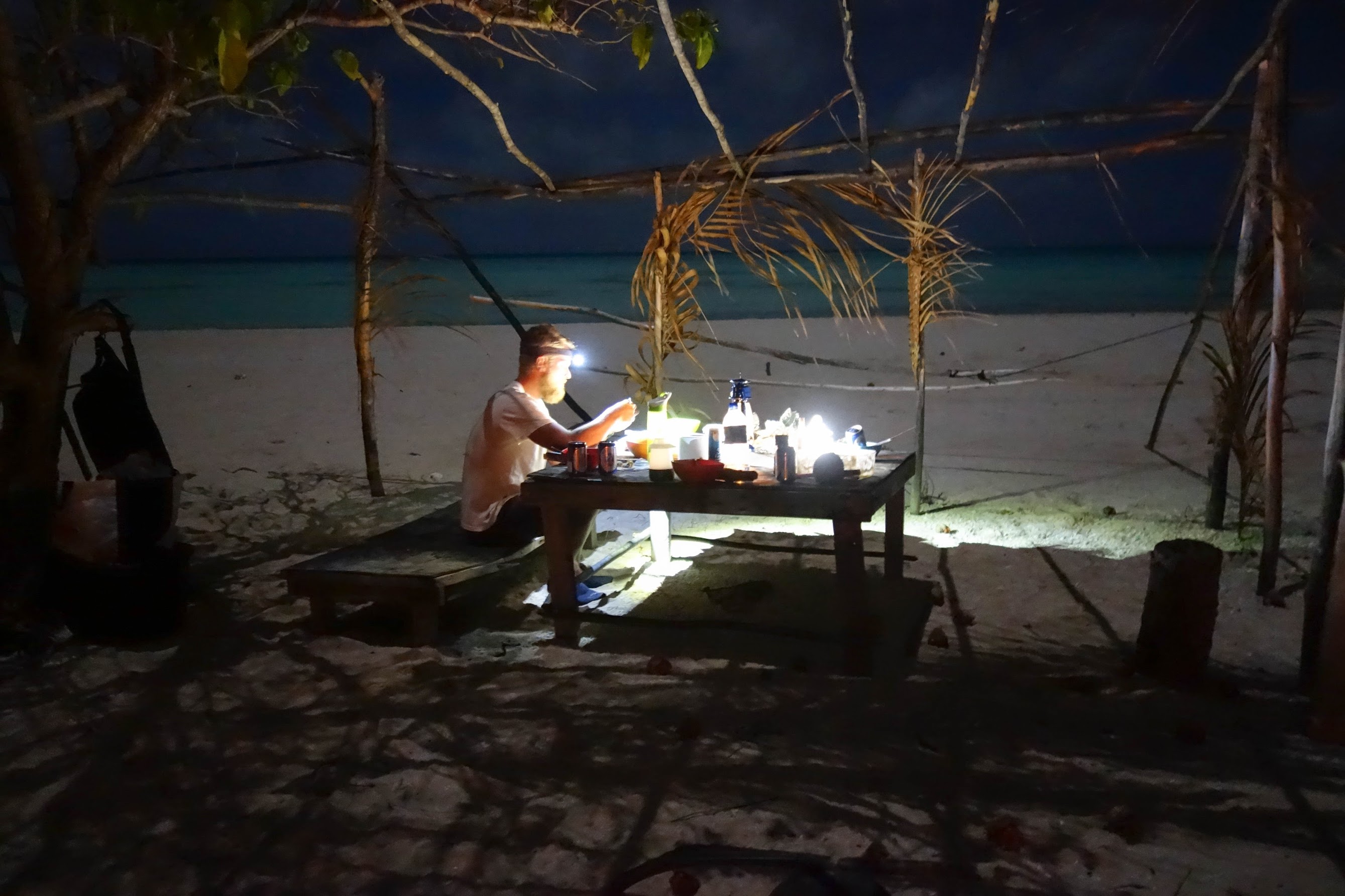 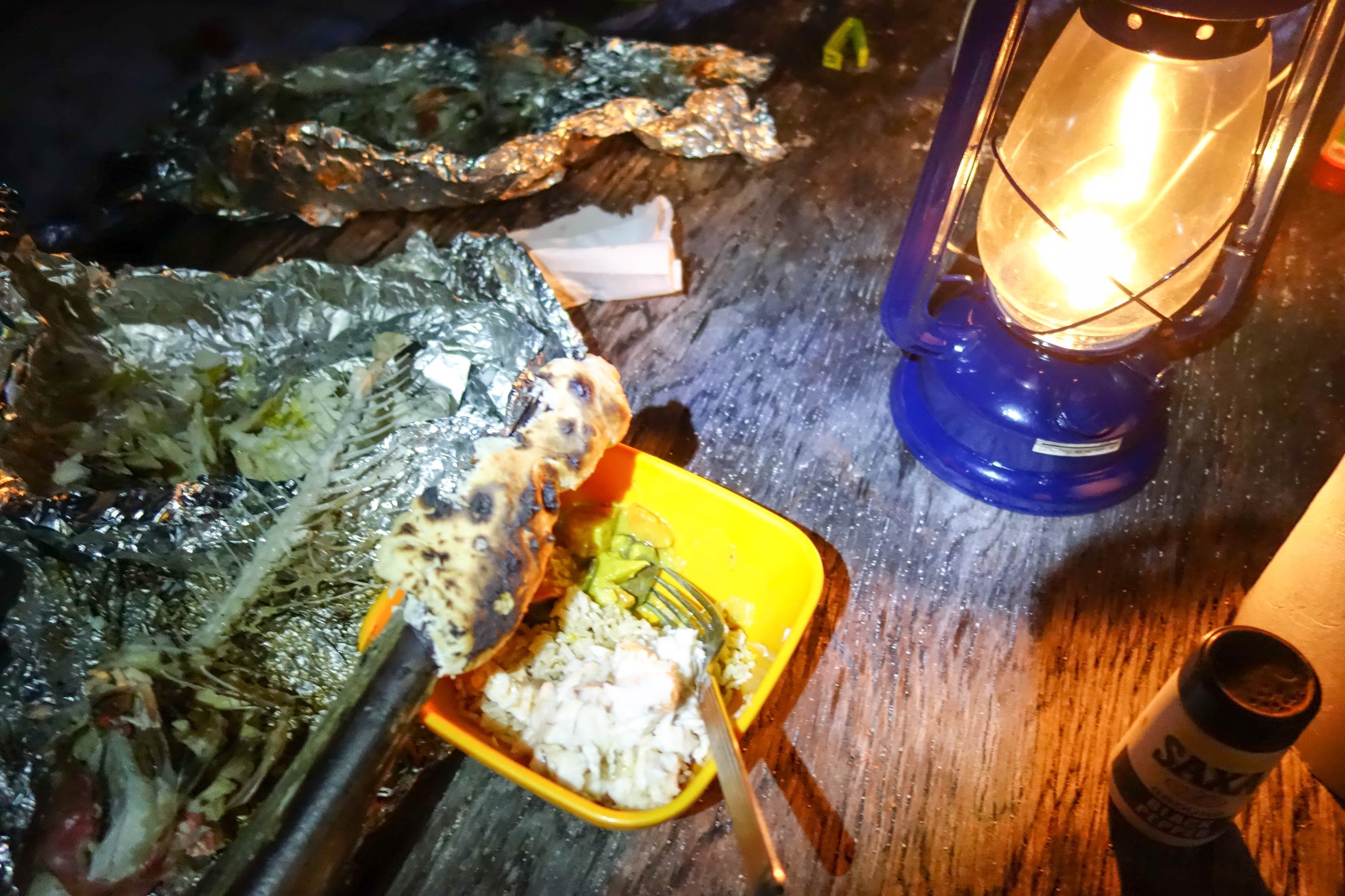 Dinner far away from civilization

In this anchorage i also tried some good old bottom fishing from the back of the boat with a rod and a piece of fish for bait. It was almost too easy, as soon as the bait hit the bottom (or on the way down) I would feel the first taps at the tip of the rod and soon after hook a nice snapper, sweetlip, grouper, parrot or other fish. All with nice firm white meat - fresh and delicious. Only one thing troubling this divine existence… shark attacks! The blacktip reef sharks would pick up the scent right away and come circling, when I hooked a fish I only had ten seconds to pull it out of the water, otherwise the shark would take it! Along with my hook, leader and sinker… A couple times a shark also took the little bait and got hooked in the side of the jaw, away from teeth so i could fight it. It was a good fight on my light 8 ft spinning rod. Of course always ending the same way - shark pretty quickly managing to snap my line. Probably for the best.

The sharks were even more troublesome when spearfishing. Before when we were snorkelling and we saw a shark it was always a nice experience, majestic fishes always cruising along in the periphery. But now they are attracted to the commotion and come in groups of three or four and clearly shows interest in you. Sometimes one would swim straight at you only to turn a couple meters away. When they do this we stop fishing and swim back towards the boat...backwards with eyes and speargun pointing at the shark. These sharks are known to sometimes attack, never killing a diver but taking a bite - this could of course be deadly, especially in a remote location like this.

So this actually really made it hard to fish for us in Makemo. To pay them back we decided to play with them a bit one evening, tying a big fish head to a rope and letting the ten or so sharks behind our boat try to eat it. This time some lemon sharks came in too and they were even more aggressive, they bit the head so hard that we could pull them out of the water for maybe 20 seconds before they would let go! Got some great pics and video of all this. By now we knew the sharks were probably more pissed off at us than usual so we had to leave the island. Next stop - uninhabited atoll of Tahanea. 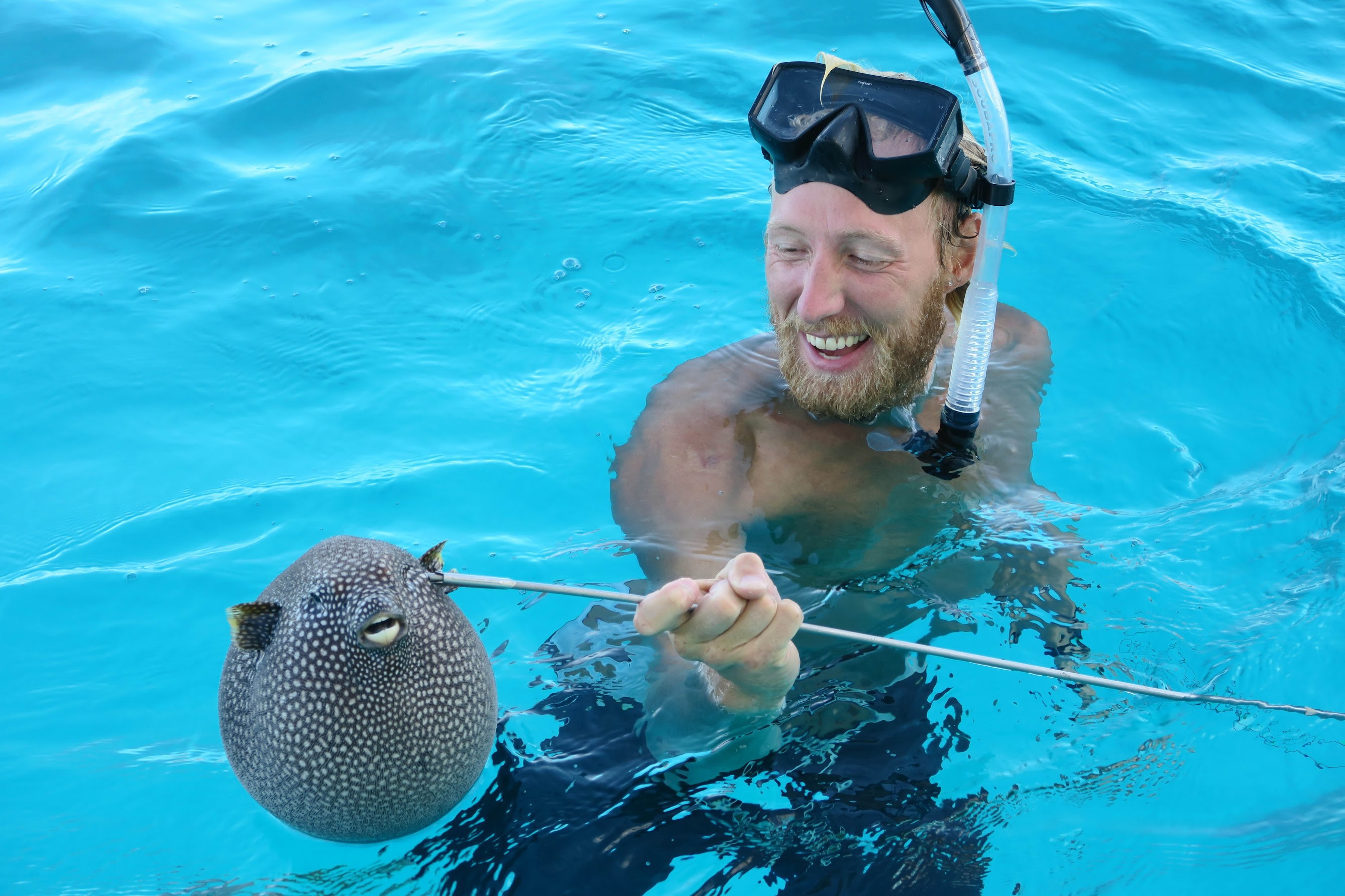 Sometimes things don't turn out as you had planned. A tasty looking fish became a handball. 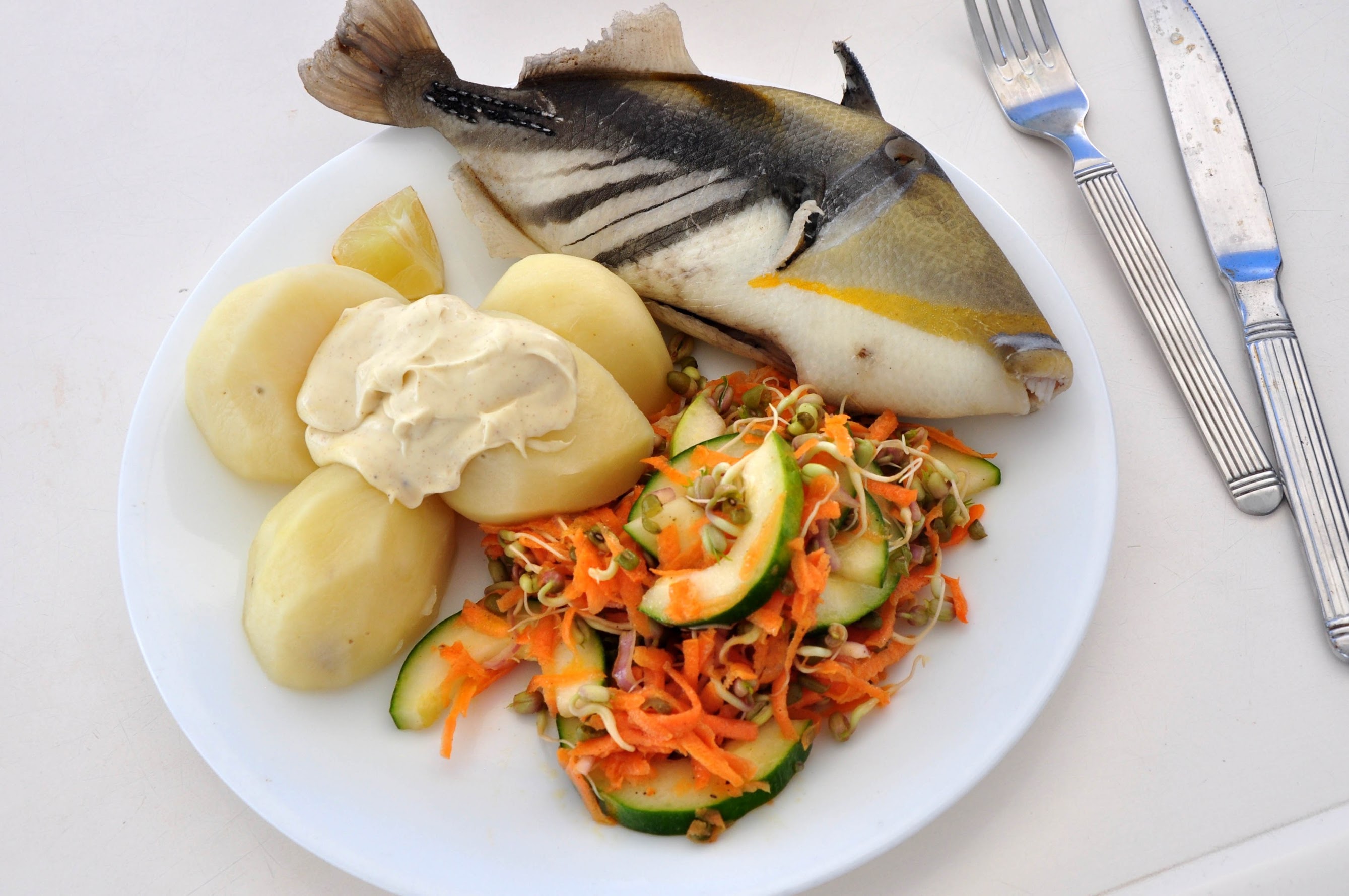 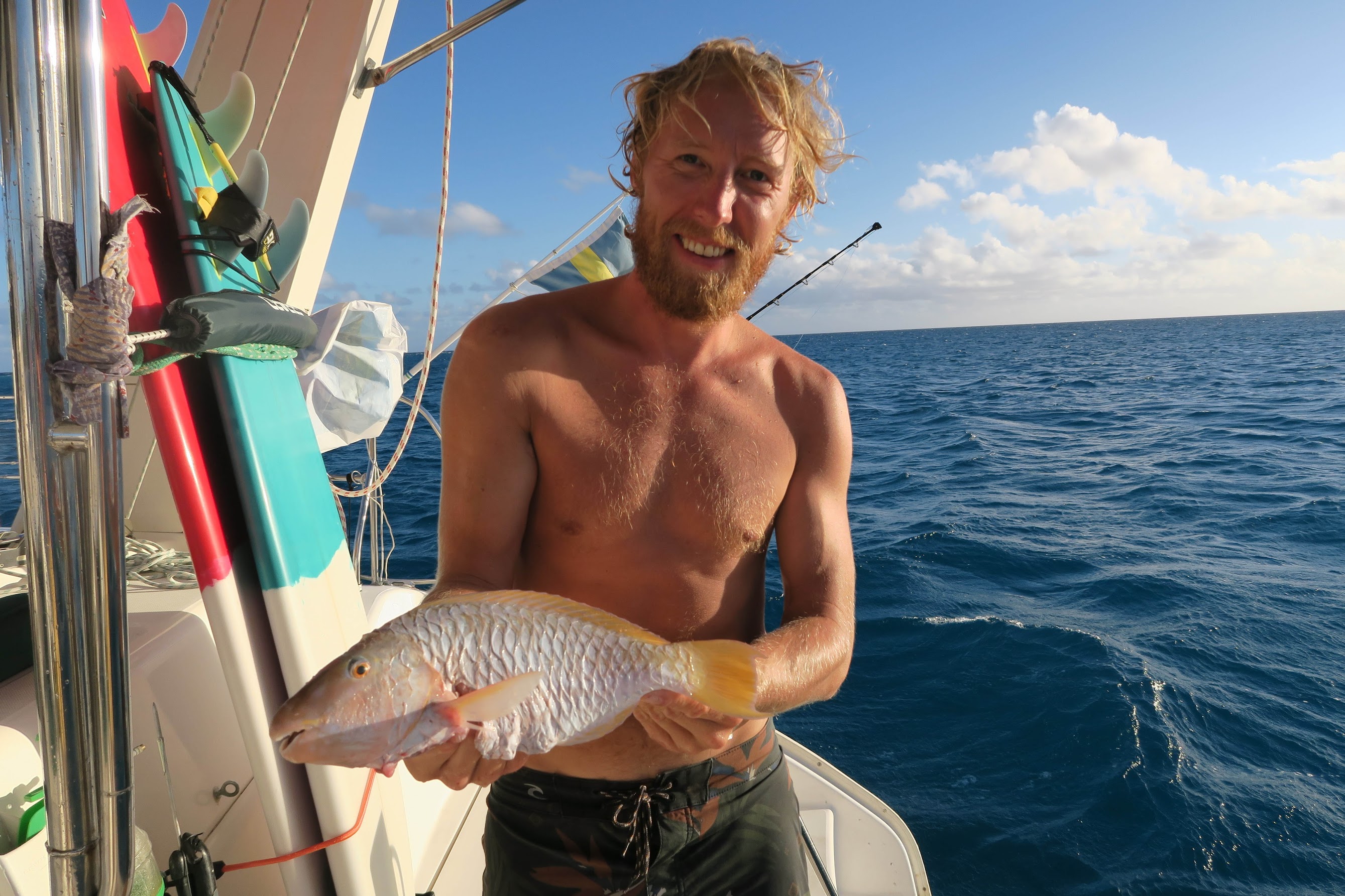 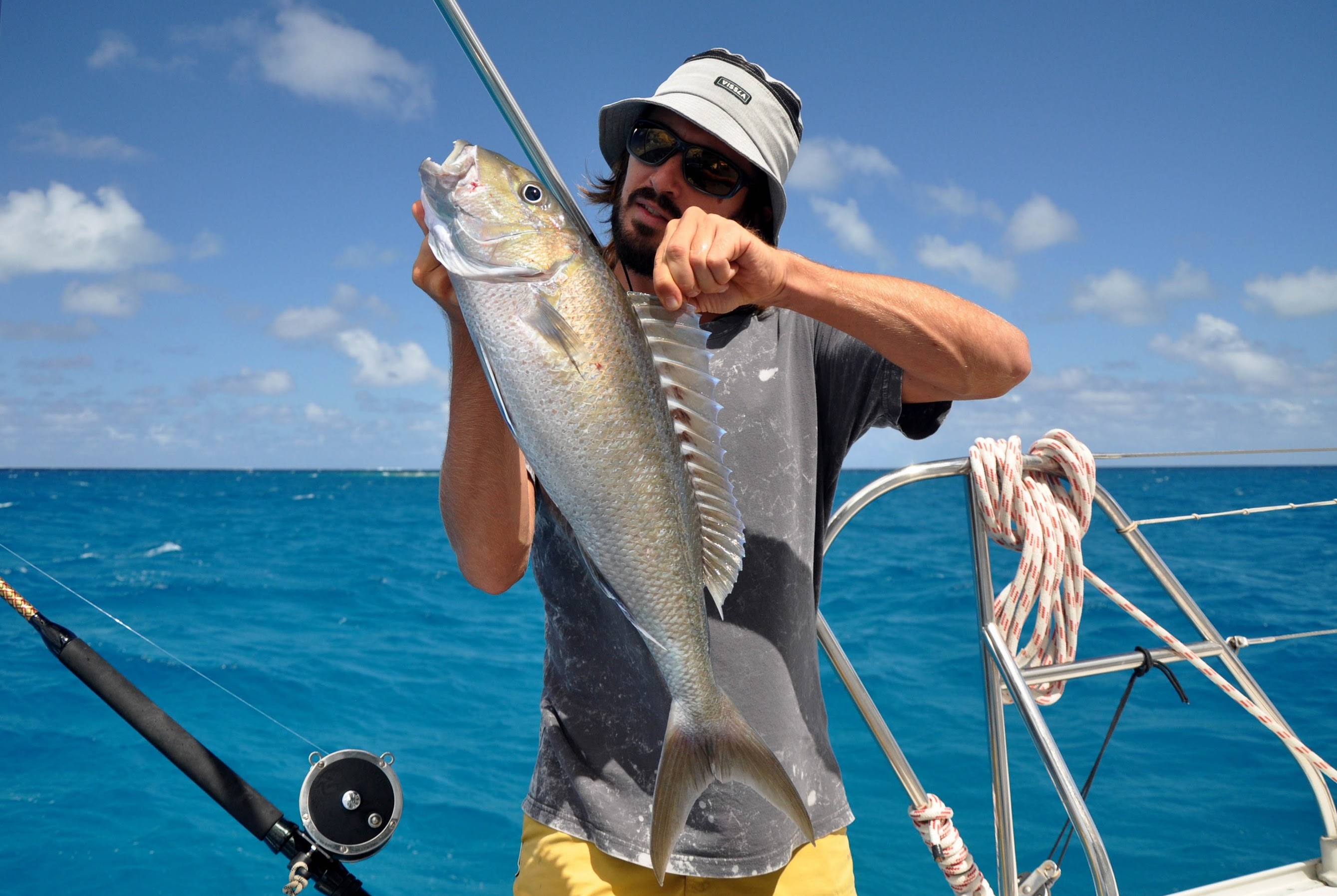 Green jobfish, a type of snapper. 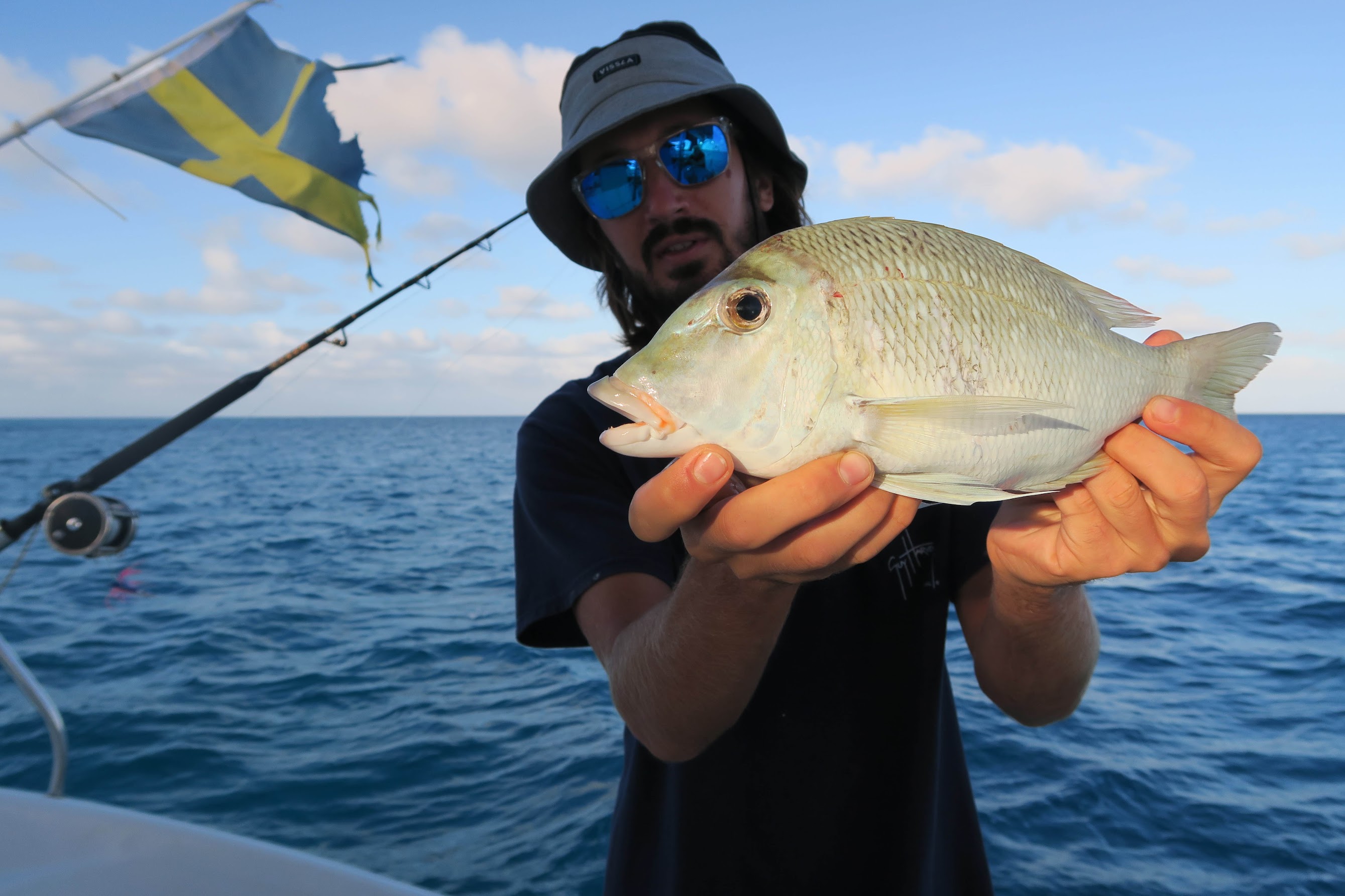 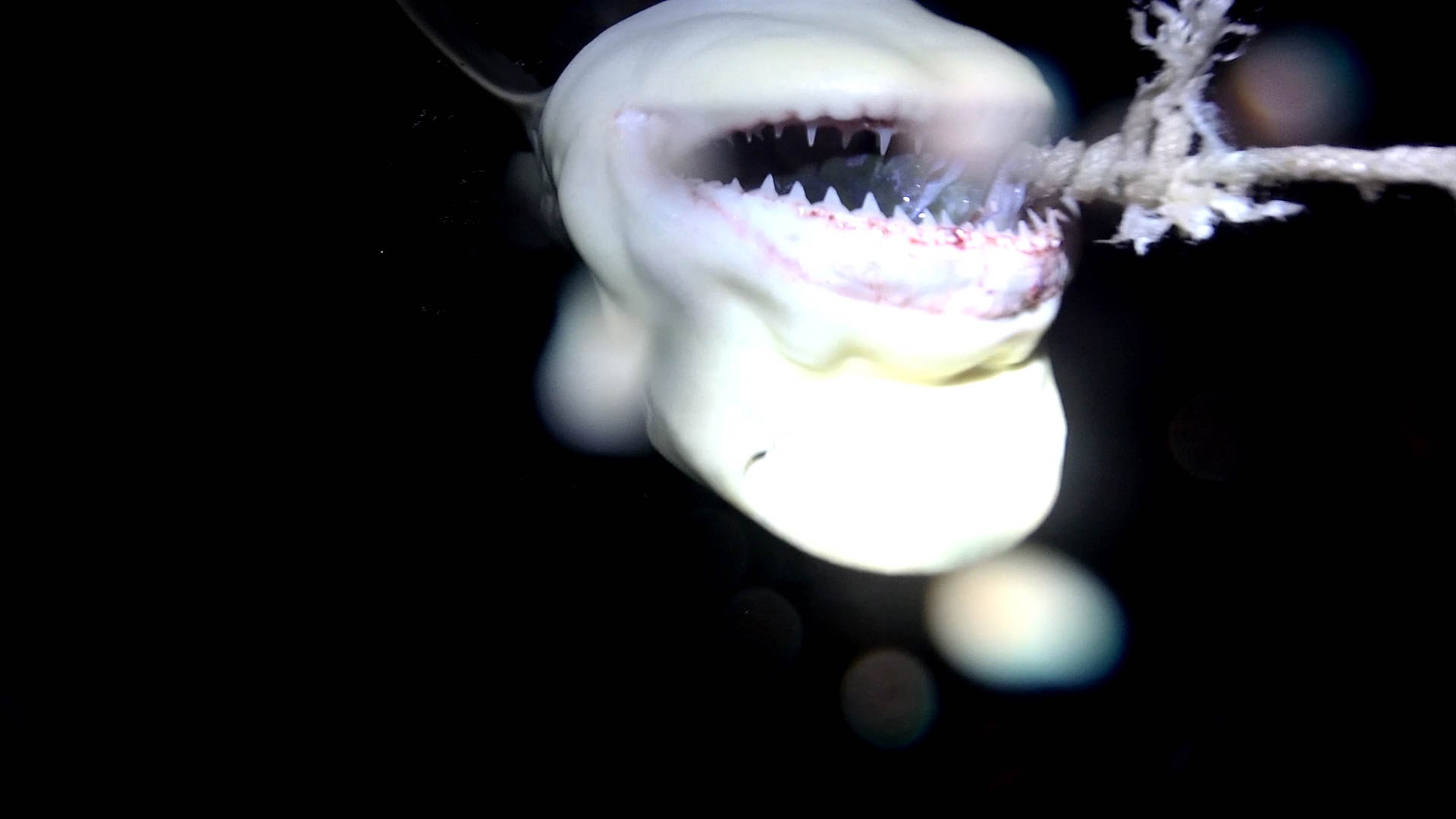