← Quick update from Panama – We are now in the Pacific Ocean! The Panama Canal →

We felt really refreshed arriving in Colon after two great and relaxing days in beautiful San Blas islands. We did an overnight sail from El Porvenir down to Colon and the Caribbean side of the Panama canal. Approaching the big break water which surrounds the entrance to the Colon bay we needed to slalom between the big container vessels and tankers anchored up waiting to transit the canal. You feel pretty small when you get close to the big ships, even in our reasonable sized cat. 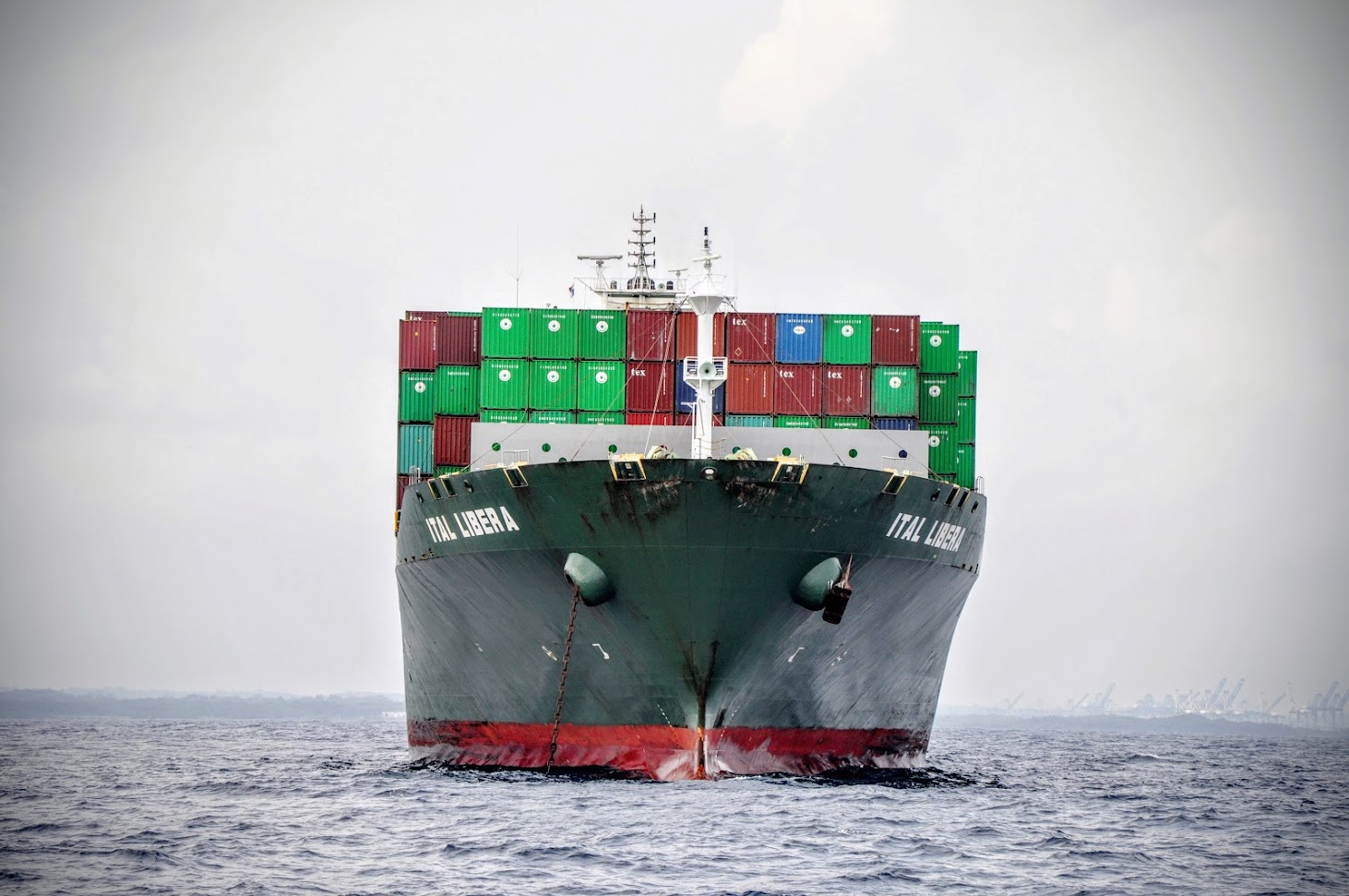 Big container ship anchored outside of the breakwater in Colon

We went straight into Shelter bay marina which is situated in the north west corner of the Colon bay. We called them up on the VHF and got assistance from the marina staff tying up to the dock. They speak very good english and are to great help with many questions you may have. This marina was different from other marinas we had visited so far. A super friendly atmosphere with a lot of activities around between the visitors. It gathered a lot of interesting boating people from all over the world. A lot of them staying for a long time, some for even more than one year, others seemed to come back every season. As soon as we landed people stopped by the boat interested to know who we were, where we came from, where we were going, if we needed any work done on the boat, if we wanted to join the Saturday night jam session etc. 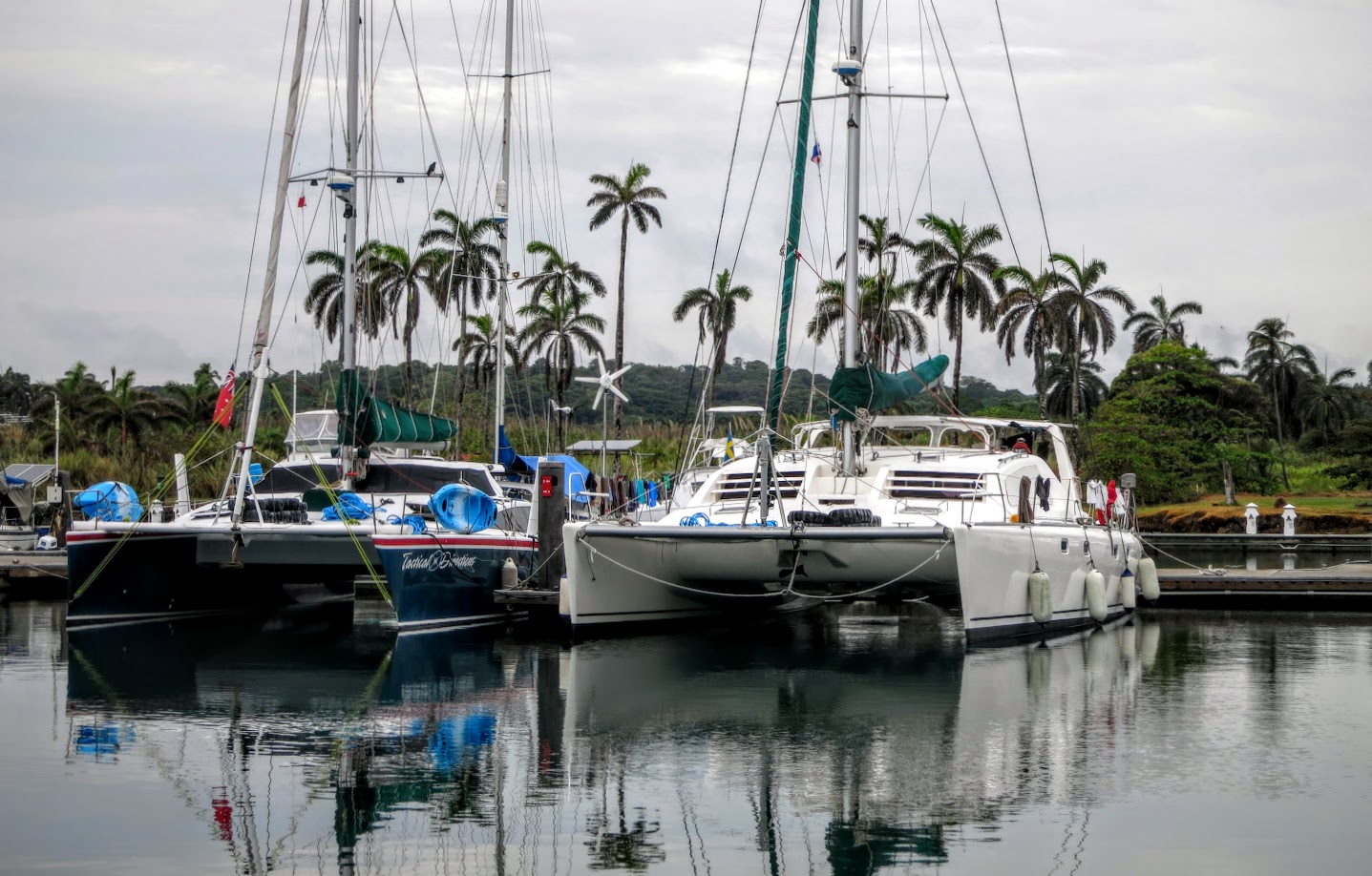 Kenobi at the dock in Shelter bay marina

One night we had some beers at the restaurant with the crews of three different super yachts, it was interesting to hear about the everyday life on a super yacht. One of the yachts had stayed in the marina for a consecutive four months without leaving the premises more or less, the owners didn’t really use the yacht but of course it always needs to be in perfect condition! they were pritty sick of this place. One of the other crews had the complete opposite situation, they had sailed pretty much all over the world during the last year and was sick of all the work. It was fun to hear them argue about who was worse off… One morning Rob invited us for breakfast at his Gun boat 66, a super nice “luxury performance cruiser” catamaran. Rob was an ever smiling Aussie that showed us around his boat with great enthusiasm, we were almost as excited as him by all the cool high performance gear and the nice interior of the boat. Rob also invited us to visit him in Brisbane once we get to Australia, which we will gladly do. Last but not least we had the Kiwi Glenn and his crew over for some drinks one night and got to hear his incredible stories. During his cruise down the inter coastal waterway on the east coast of the USA he made a documentary called “where is the fox hat”. His plan was not to make a full documentary but he was faced with so many interesting situations along the way, among other things he ended up managing a Nascar team! 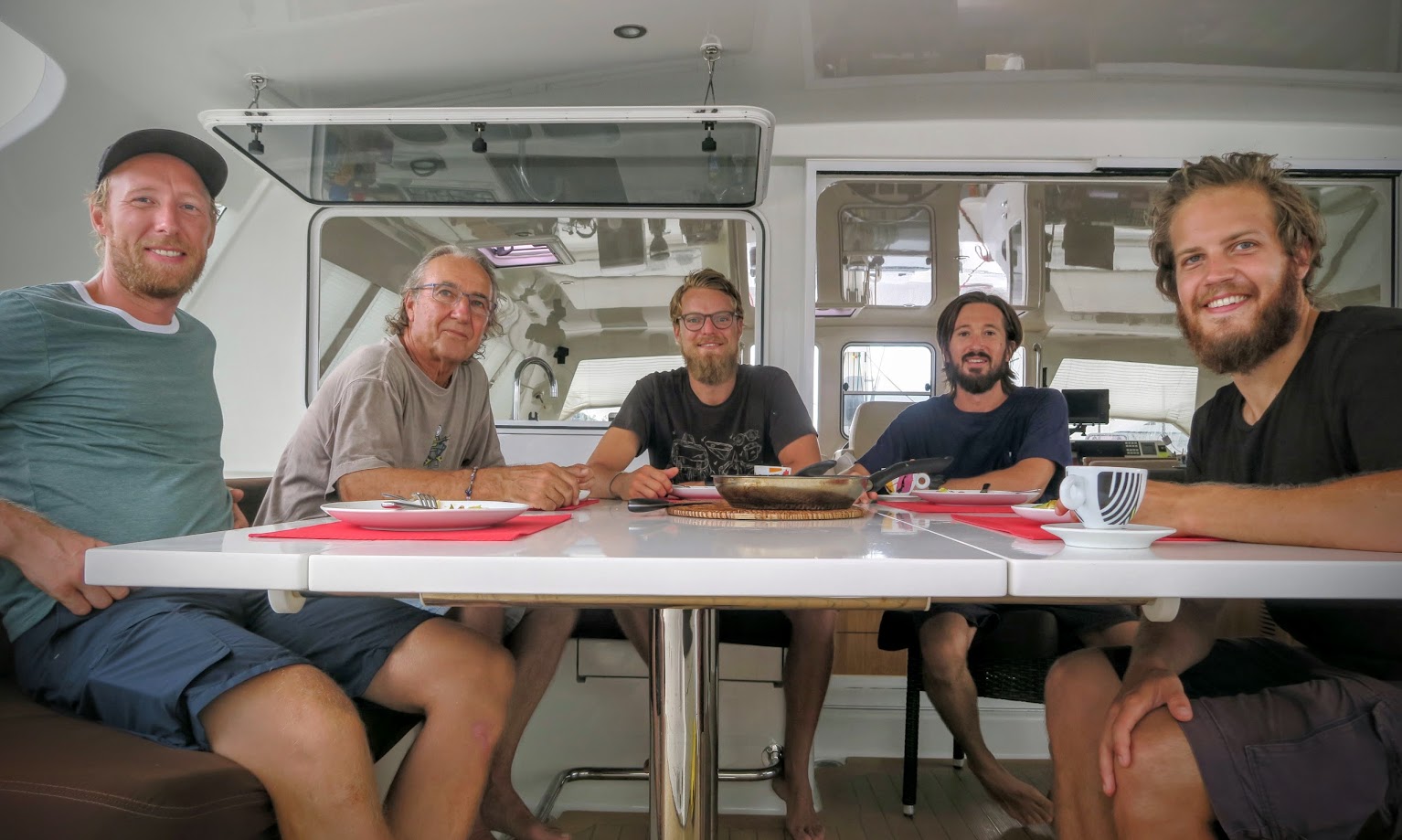 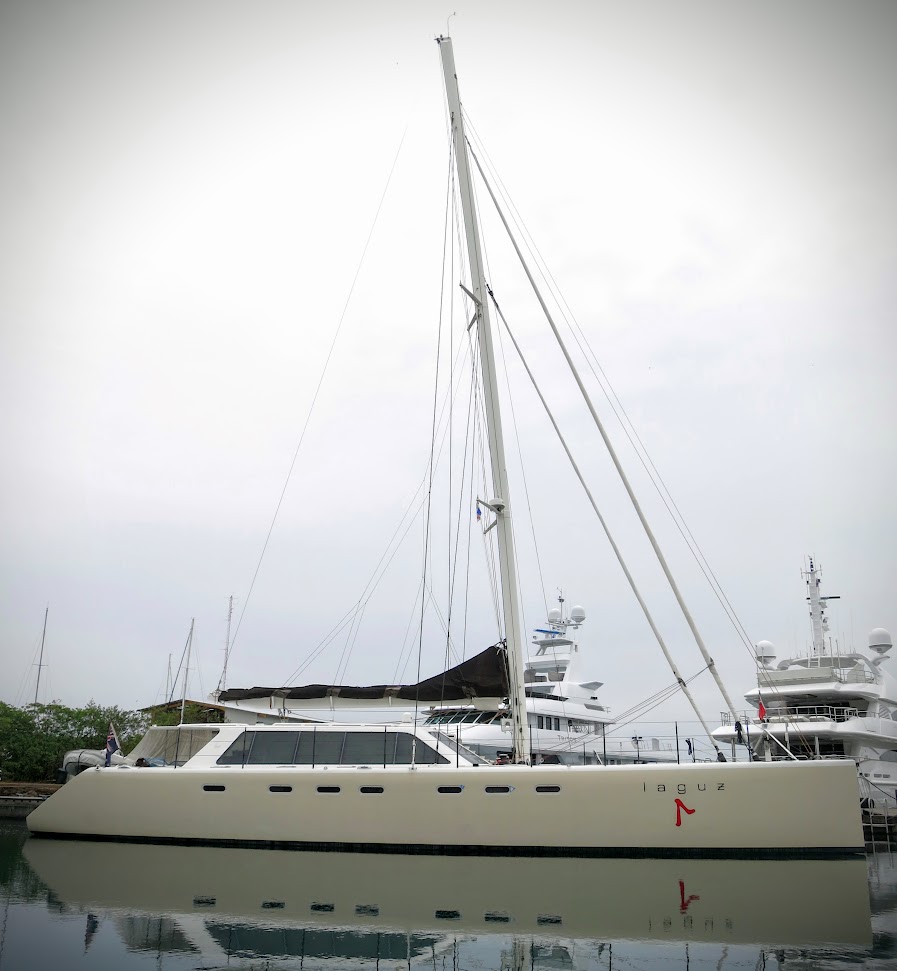 Breakfast with Rob on his Gun Boat 66 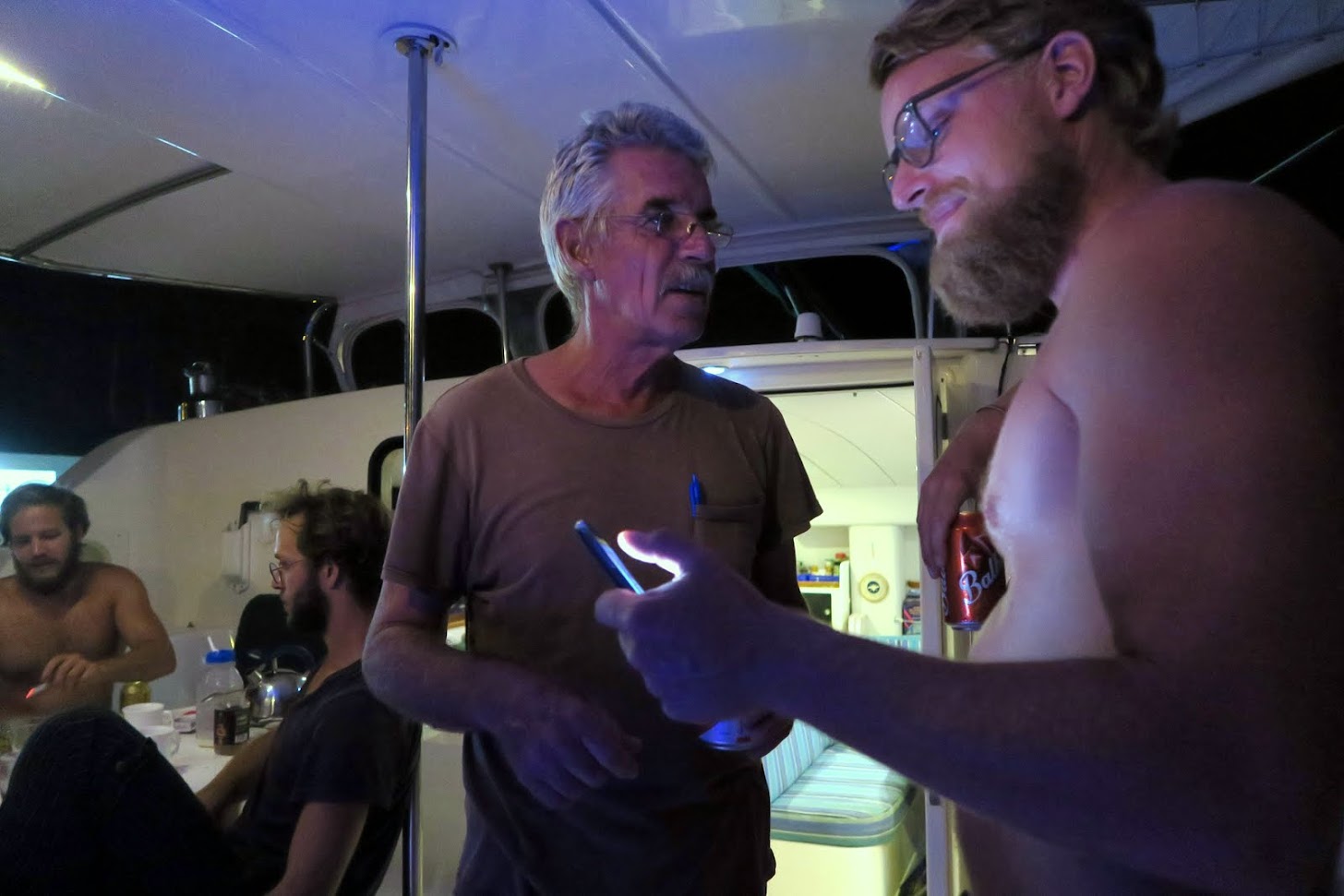 Shelter bay marina is situated on the premises of an ex U.S military base and a lot of abandoned military sites and buildings nearby. Walking, or jogging, around felt like being in an old American war movie. Apparently they trained their soldiers here for the Vietnam war, they even imported and planted a kind of high grass from southeast Asia to make the environment more realistic. The surrounding jungle also offered a lot of animals like snakes, monkeys and sloths, which we saw a few of during our stay. 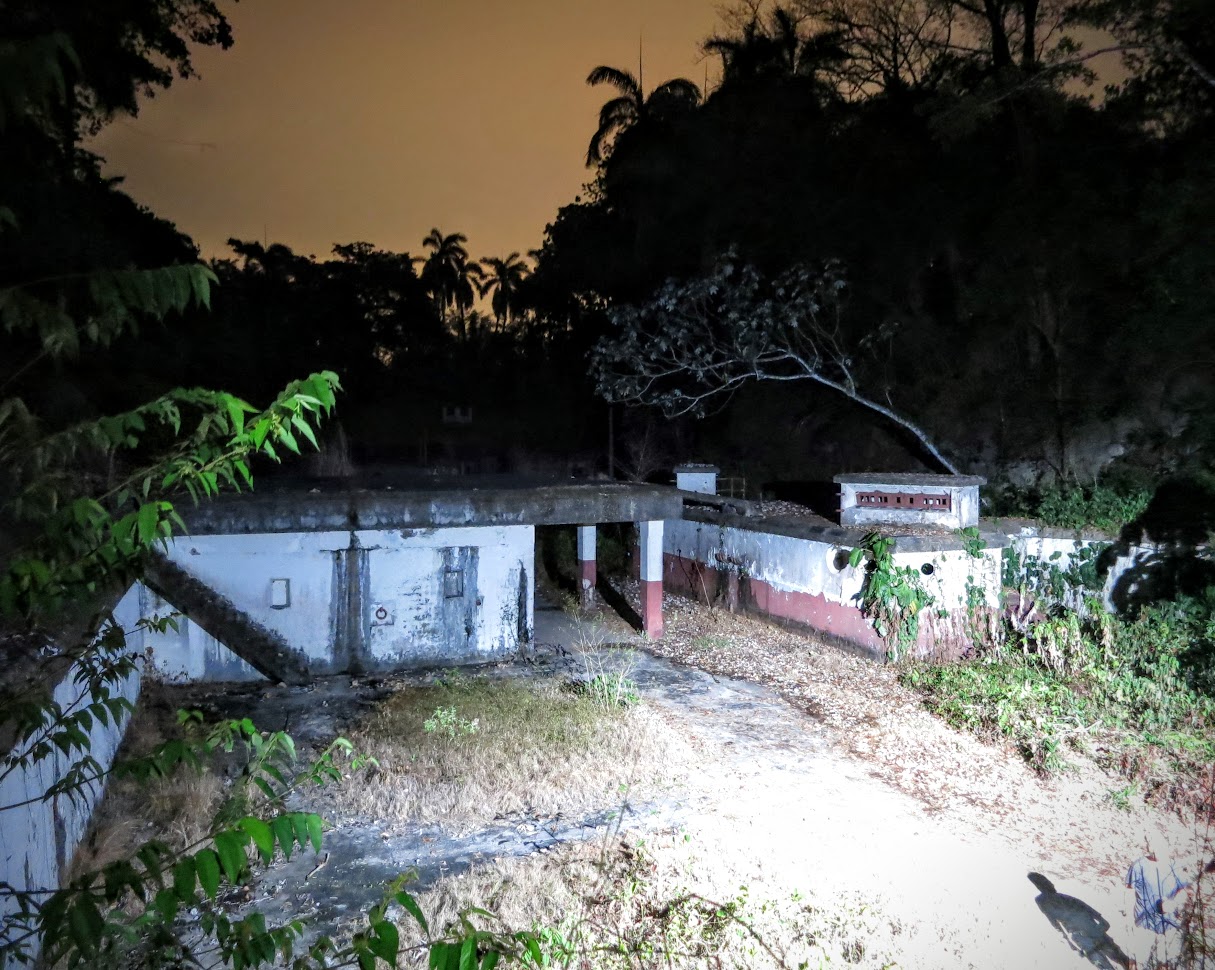 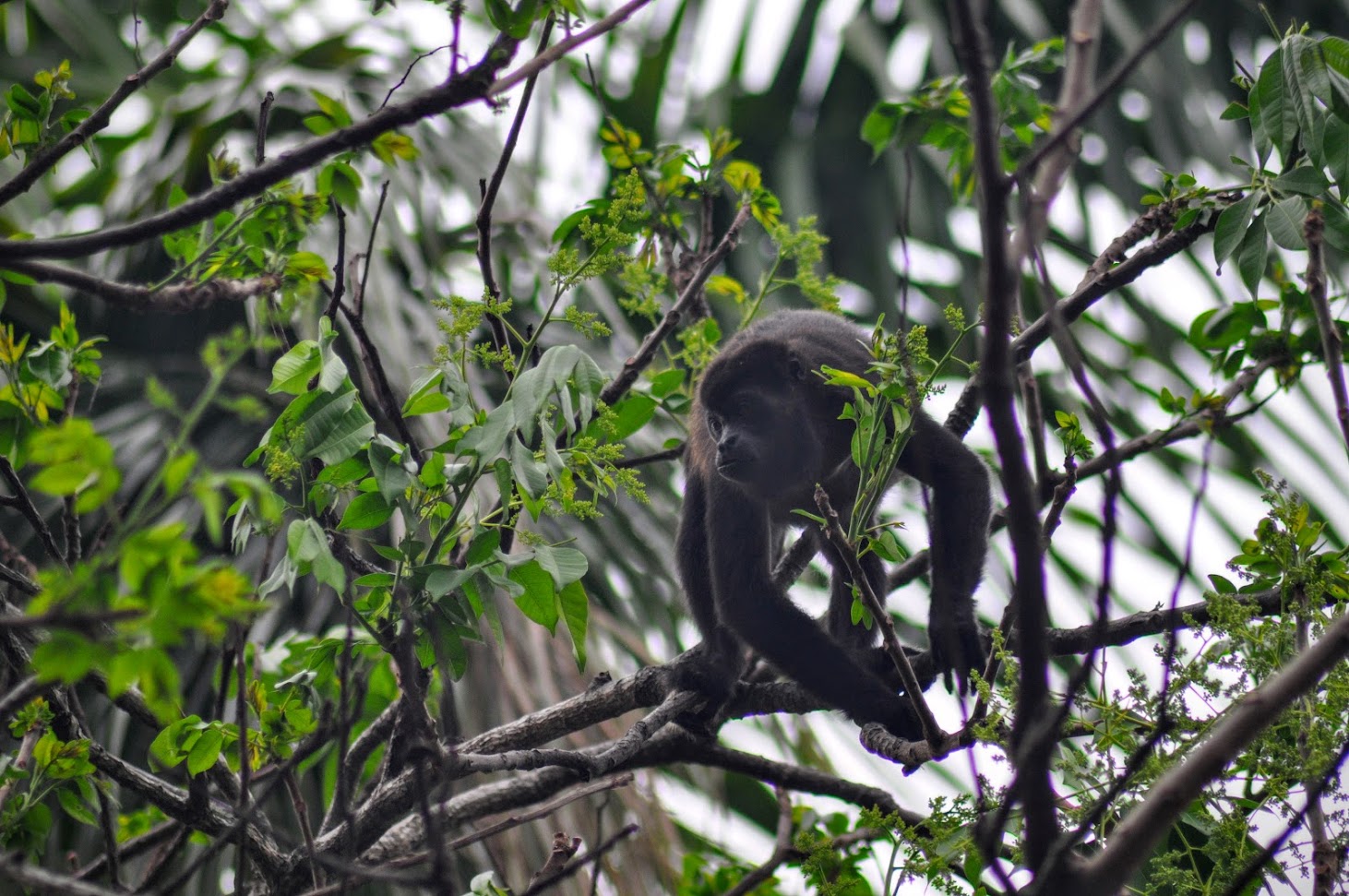 A monkey in a tree

We had to stay in the marina for one week before we could transit the Panama canal. We did quite a lot of maintenance work on the boat, a few problems that we had discovered during our initial legs of sailing needed some attention before heading out into the Pacific Ocean. The problem with the damaged reef line that we experienced outside of Curacao we found was due to a worn down wheel in the boom. We found broken pawls and springs in one of our winches during regular maintenance which we needed to fix. And, we had to get a new Autopilot computer since ours, for some reason, had broken down during our stay in Cartagena. To our surprise we managed to get our hands on a used autopilot in good condition through a local electronics guy called Eric. Spare parts for sailing yachts are generally not easy to get hold of in Panama. Fortunately for us we had Lukas dad arriving in Panama City so we could make him bring some last minute parts from Sweden. We also received an order from Marine Warehouse who deliver parts here from the US, we got them delivered all the way to the boat through DHL. 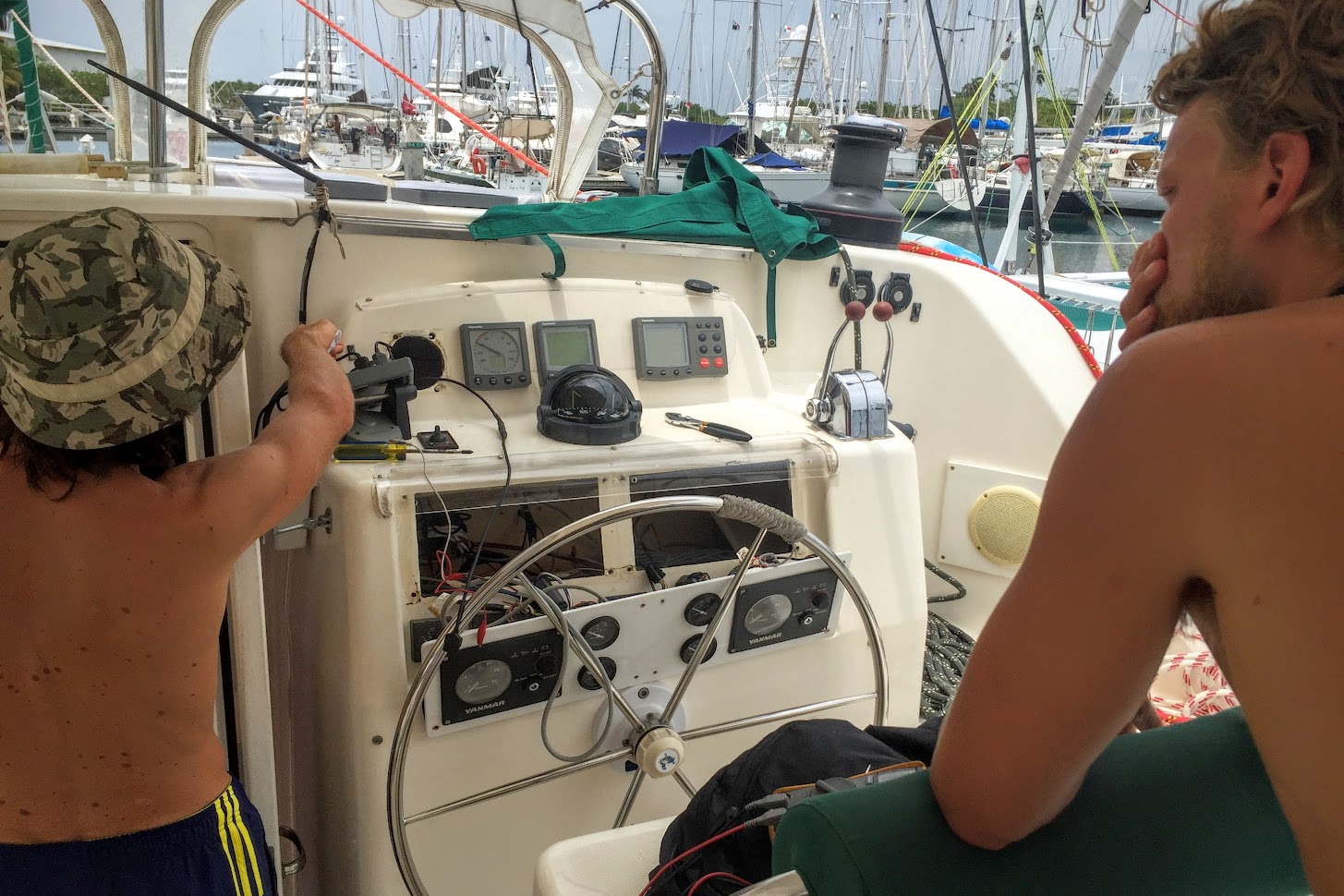 Lukas is trouble shooting the faulty autopilot in Shelter bay 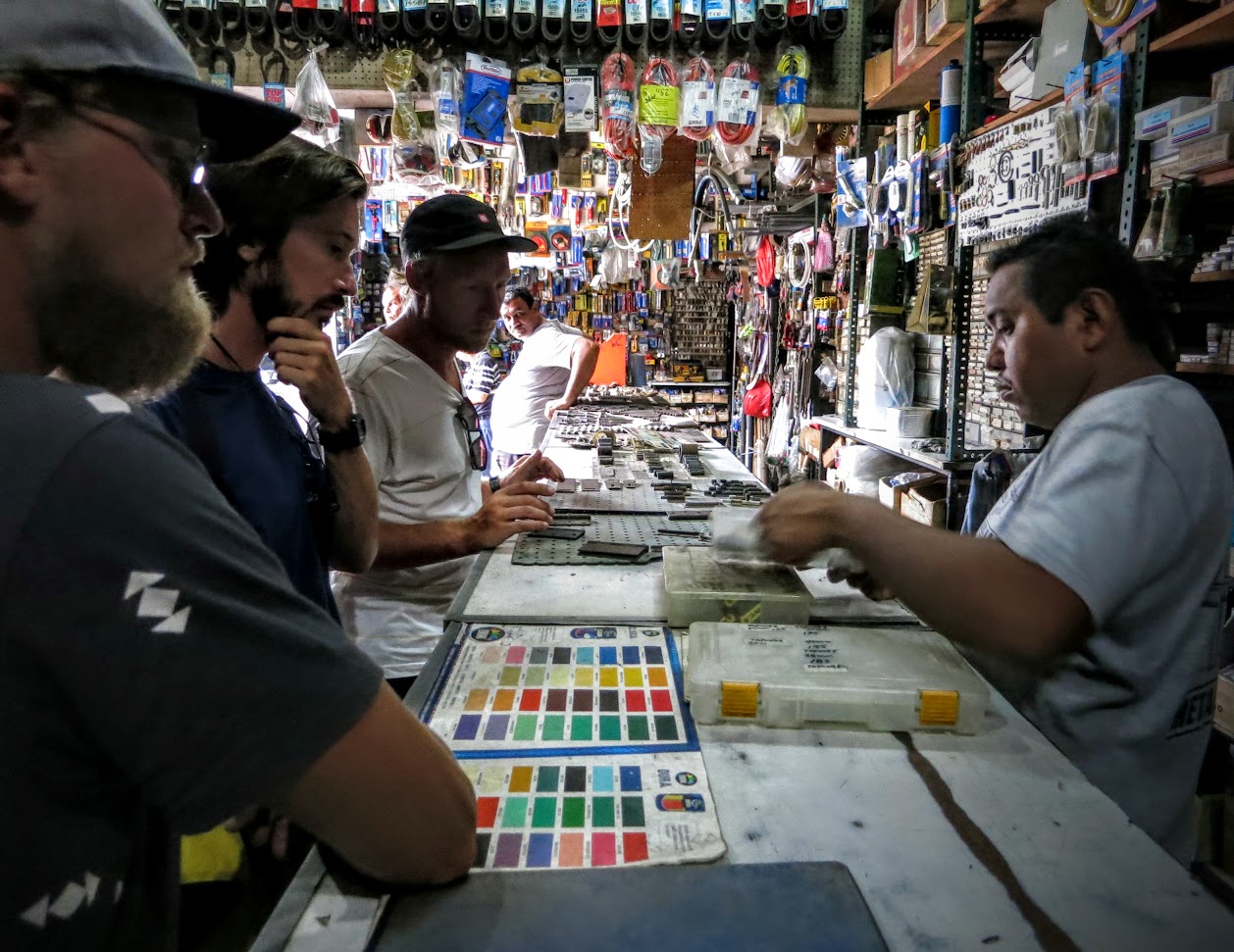 Hunting down spare parts in Colon 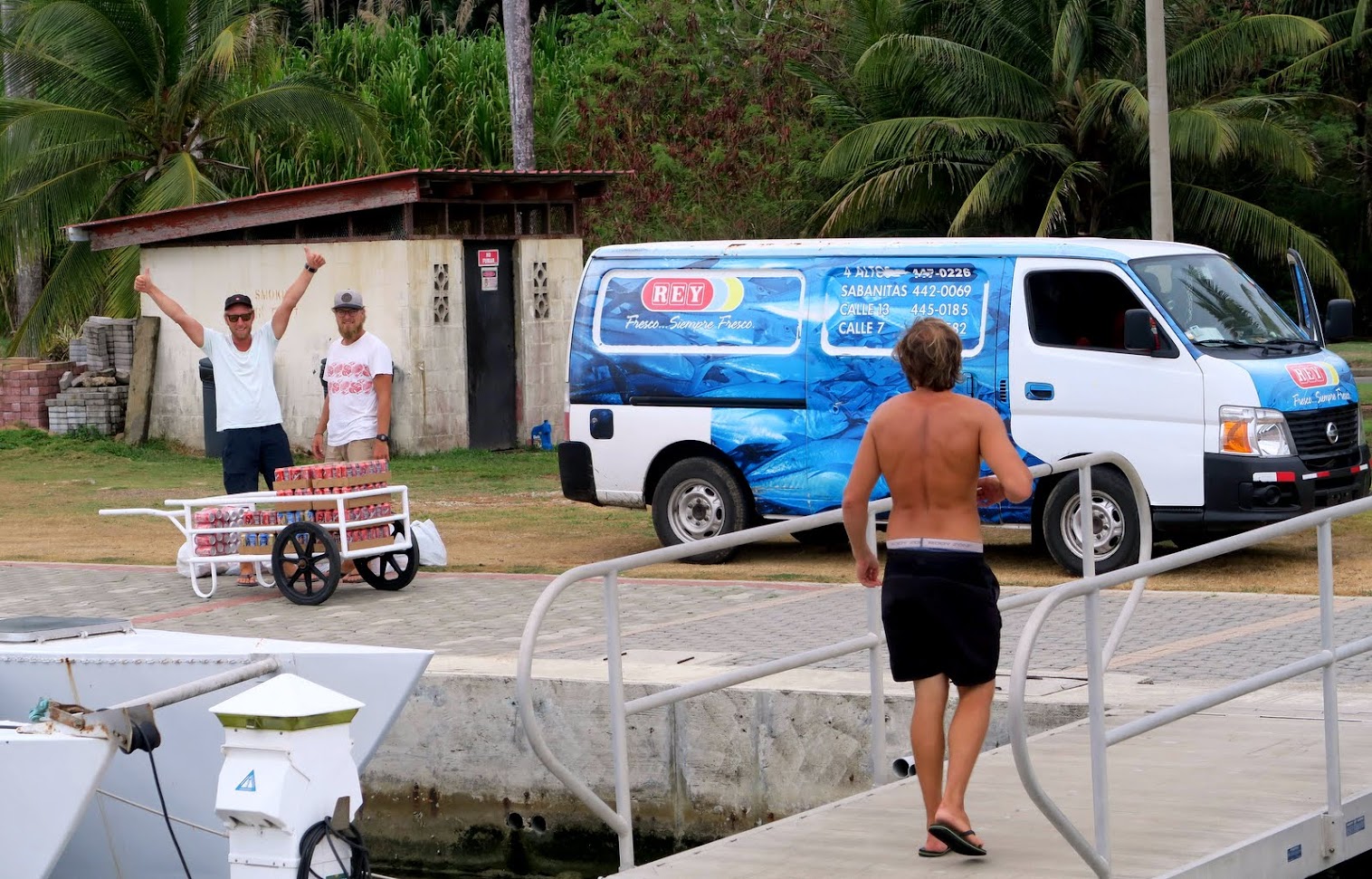 Drinks and food delivered to the boat

When you transit the Panama canal you need at least four people on board besides the captain, these people have to handle the lines used while passing thru the locks of the canal. This made us one man/woman short on Kenobi. In the marina there were always people around looking for transiting the canal on shorthanded boats as “line handlers”, just for the experience. We put up a note on the notice board and a few moments later two German backpackers showed up on our boat wanting to sign up for the job. We got along really well and we invited them to join Kenobi for the transit. Since our transit were postponed for one day we had the Germans onboard for three nights. We had a lot of fun together during their stay, all of us thought it was nice to see some new faces on the boat.


Please read the separate blog post about the canal transit,.

On the other side of the canal we anchored up outside of La Playita yacht club in Panama City. The anchorage is at the west side of the Flamenco peninsula and the waves from all the commercial traffic to the canal made it pretty rough, but we were ok off in our stable catamaran. We said goodbye to our German friends Lukas and Lu, who had accompanied us during the canal transit, and hit the town for a last night out before leaving civilization for a while… Panama City offered some great bars in the Casco Viejo area, the bars were a bit more fancy than we expected and the prices too. It was a great night out and we ended up at a local style party at club “Chill out”, we were probably the only non-panamanians at this place. 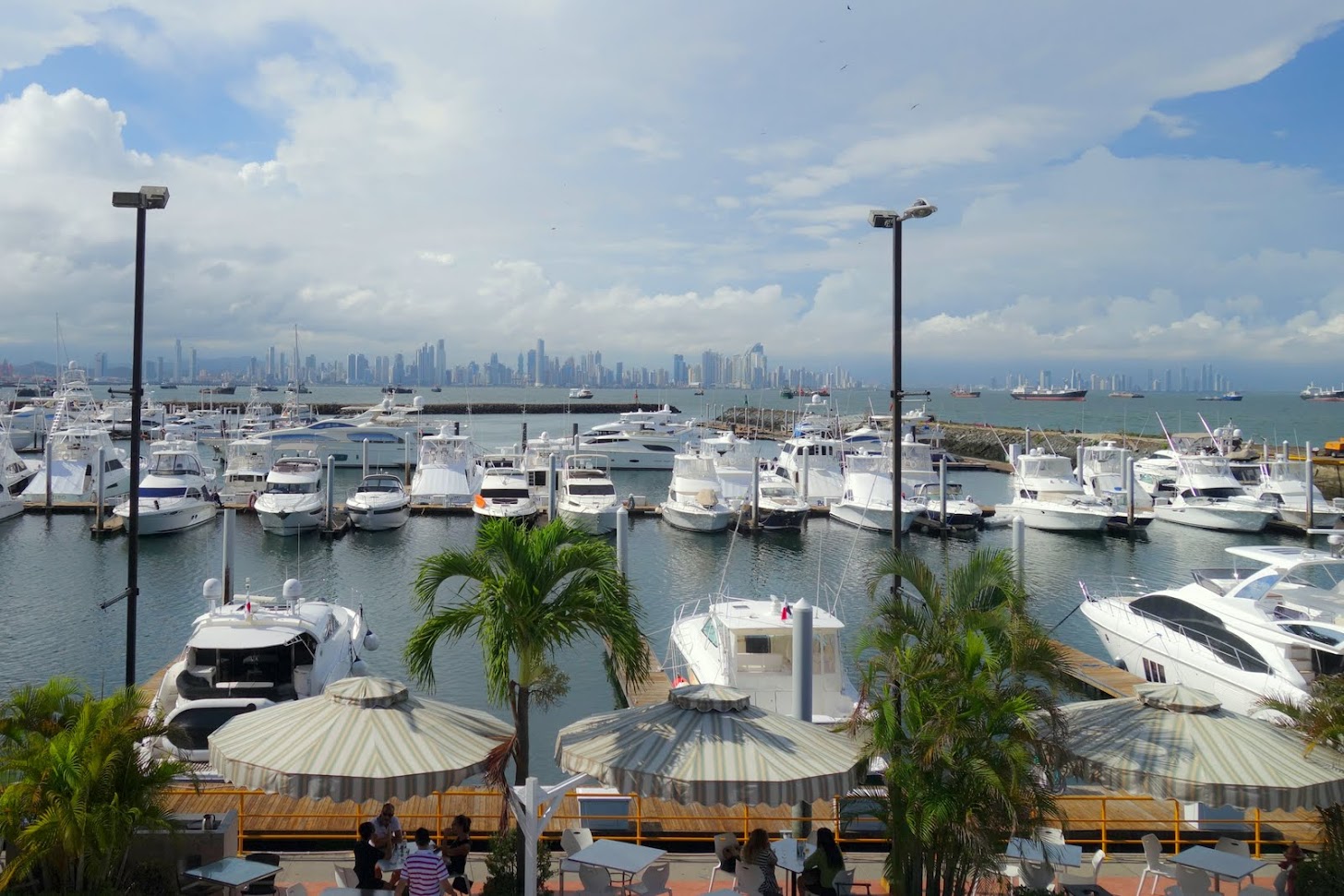 Flamenco yacht club with down town Panama city in the background

Before coming to Panama we had contacted a local surf board maker called “Boa surfboards” to buy two boards for the trip. The owner Juan picked us up in his car on Monday morning and took us to his shop on the other side of town. This was a really cool guy, he made his own boards right across the street from his surf store. We bought one cool long board and one cool fun board from Boa, this will hopefully be a good setup for the four of us to learn and develop our wave surfing. On the way back to the boat he took us on a little tour around town so we could pick up some necessities for the trip like cigars, liquor and nice cheese. 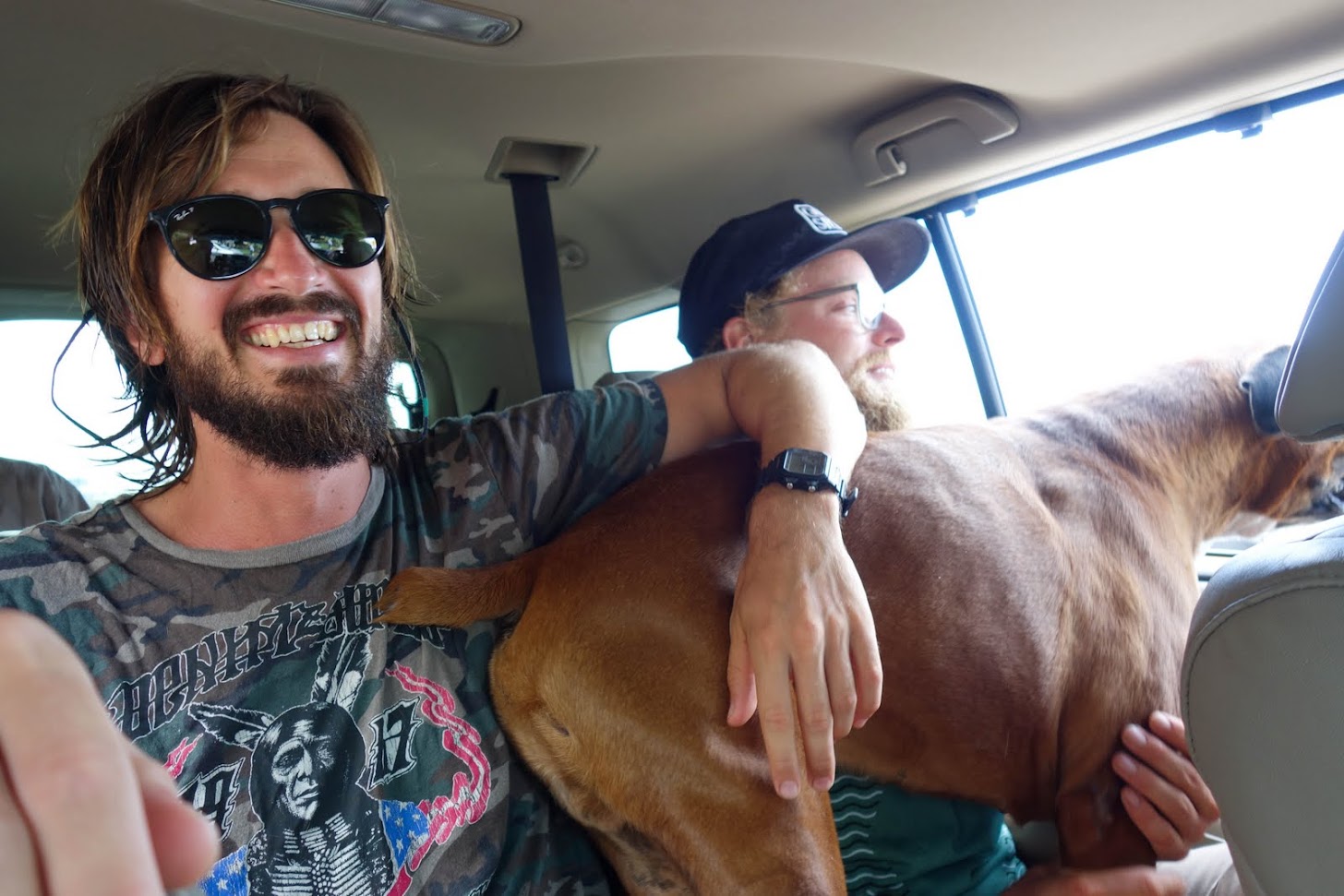 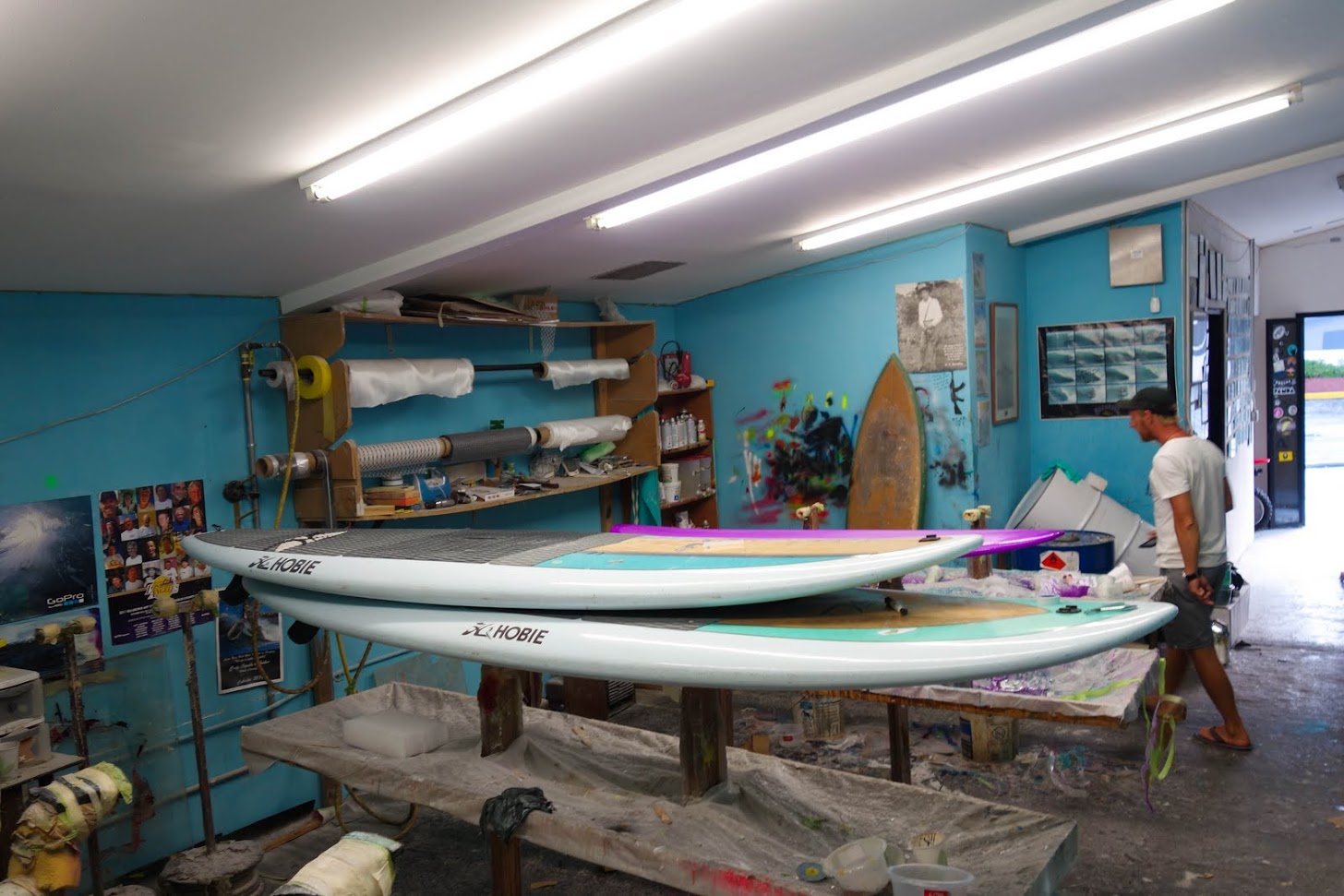 During the few days we spent in Panama city we did some final preparations for the pacific. We installed the last few things on the boat that Lukas dad brought from Sweden, we stocked up on the last supplies and groceries and we filled all the tanks of the boat with diesel fuel and fresh water. We went to huge fruit and vegetables market in town to stock up for the upcoming leg to Galapagos. This market had basically everything and the prices were really good, we paid $5 for 50 mangoes and $7 for a branch of bananas. 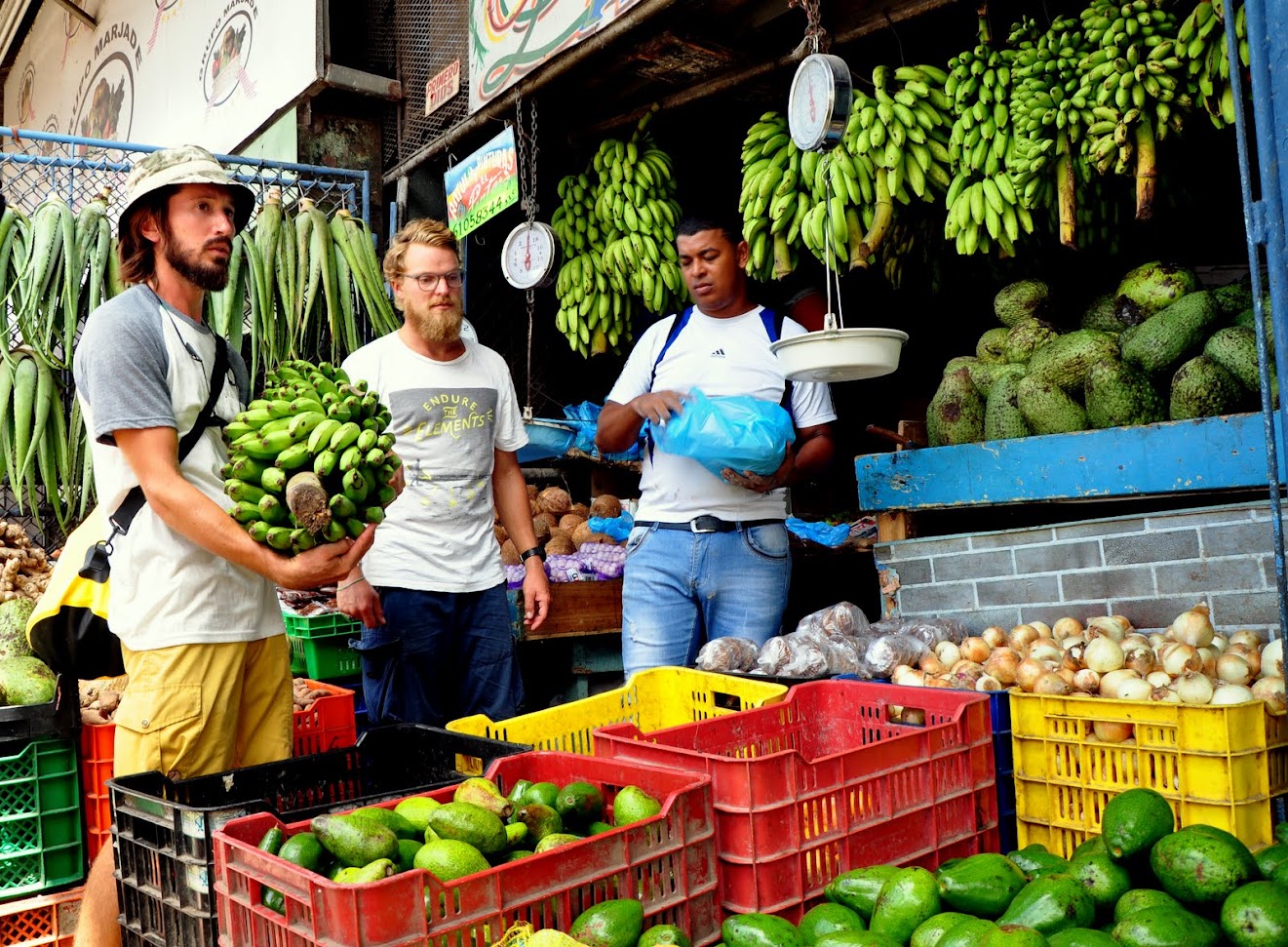 We left Panama and the south American continent on the evening of Wednesday the 4th of may 2016. Now the real journey begins!

/Hampus and the rest of the Crew


INFORMATION about Clearing in to Panama without an agent:

We decided to not hire an agent for either the canal transit nor the clearing in process in Panama. All in all we think it was a good decision to do it ourselves and save aproxx $4-500. The process was not too complicated but we had to spend a lot of time getting around to the different governmental institutions ourselves.

Here is a little step-by-step guide to the process of clearing in and out of Panama.
Clearing in you need to complete the following steps:
1. Go to Port captain with the boats papers and zarpe to obtain the “declaration general”. They are to be found at the marinas.
2. Go to Immigration to get a 72h temporary visa (possible at different immigration offices, also available at some marinas).
3. Go to Maritimo Autoridad de Panama To get a Cruising permit for the boat (aproxx $185 per vessel).
4. Go to Immigration office to get Mariners visa ($105 per person). Do this before your 72h temporary visa expires. This is only possible at the immigration office at harbor area in Colon or Albrook area in Panama city, not at the marinas.
- Now you are DONE with the clearing in process!

Clearing out you only need to:
1. Go to immigration at the marinas.
2. Go to the port captain in the marinas to get your zarpe from Panama.

Remember to bring lots of copies of passports, boat papers, zarpe from last port, crew list, and a small passport photo for the Mariners visa.

This process can be done without a Cruising permit and Mariners visa if you want to save the money. If you decide to do this you cannot stay in Panama for more than 72h, hence you need plan you canal transit right and you have to go straight from the canal transit to sea at either side of the canal. We are not completely sure how this is done but it may be worth investigating if you are interested.