Passage Niue to Fiji – no stopping in Tonga this time

We are getting used to these slow passages now, completing the 650M from Niue to Savusavu (in Fiji) in 6 days is not too impressive. The last couple of passages since Bora Bora we have averaged not much more than 100M a day, we are getting out of the strong trade wind season. When we are moving the wind is either to weak or the direction not good. This makes us having to spend even more time at sea, meaning less time at anchor exploring new places.

This fact has forced us prioritize the time we have left cruising the south pacific. Spending time waiting for OK weather windows in Cook Islands and Niue made us realize we won’t have time to see everything we want to. We made the tough call to skip Tonga to have more time in Fiji. We figured it is better to put in more time in a big place like Fiji, primarily to have a chance of seeing the remote and traditional Lao group in the east part of the island group. Next time we will definitely have to put in more time in the western parts of the south pacific…

Anyhow, we left Niue as the sun was setting on Tuesday the 25th of October and set sails towards Fiji. Well, we tried to aim straight for Fiji but the wind direction was not in our favor. Since we teared the gennaker we don’t have any sail to go straight downwind in light conditions, therefore we need to gybe our way downwind to keep the sails from flogging and to keep up a decent speed. We can do approximately 45 degrees of the wind, keeping us way of the rhumb line at times. In the end we were in for a smoother ride and we could keep the speed about 5-6kn during the first 3 days zig zag gybing our way towards Fiji. During the last three days the wind picked up and turned more southerly, now we were doing 7-8 kn straight towards our target, great feeling!

Even though Tonga is situated on the western hemisphere (175° W) they managed to squeeze themselves in to the east side of the international date line, meaning they are GMT +13h and the first country to see the sunrise on every new day. Travelling westward across the date line means loosing one day! Passing by Tonga we celebrated (?!) this lost day with a nice cool IPA (beer) for dinner (We didn’t have any champagne or fois gras left). We are now 12h (in Fiji) AHEAD of you guys back home… 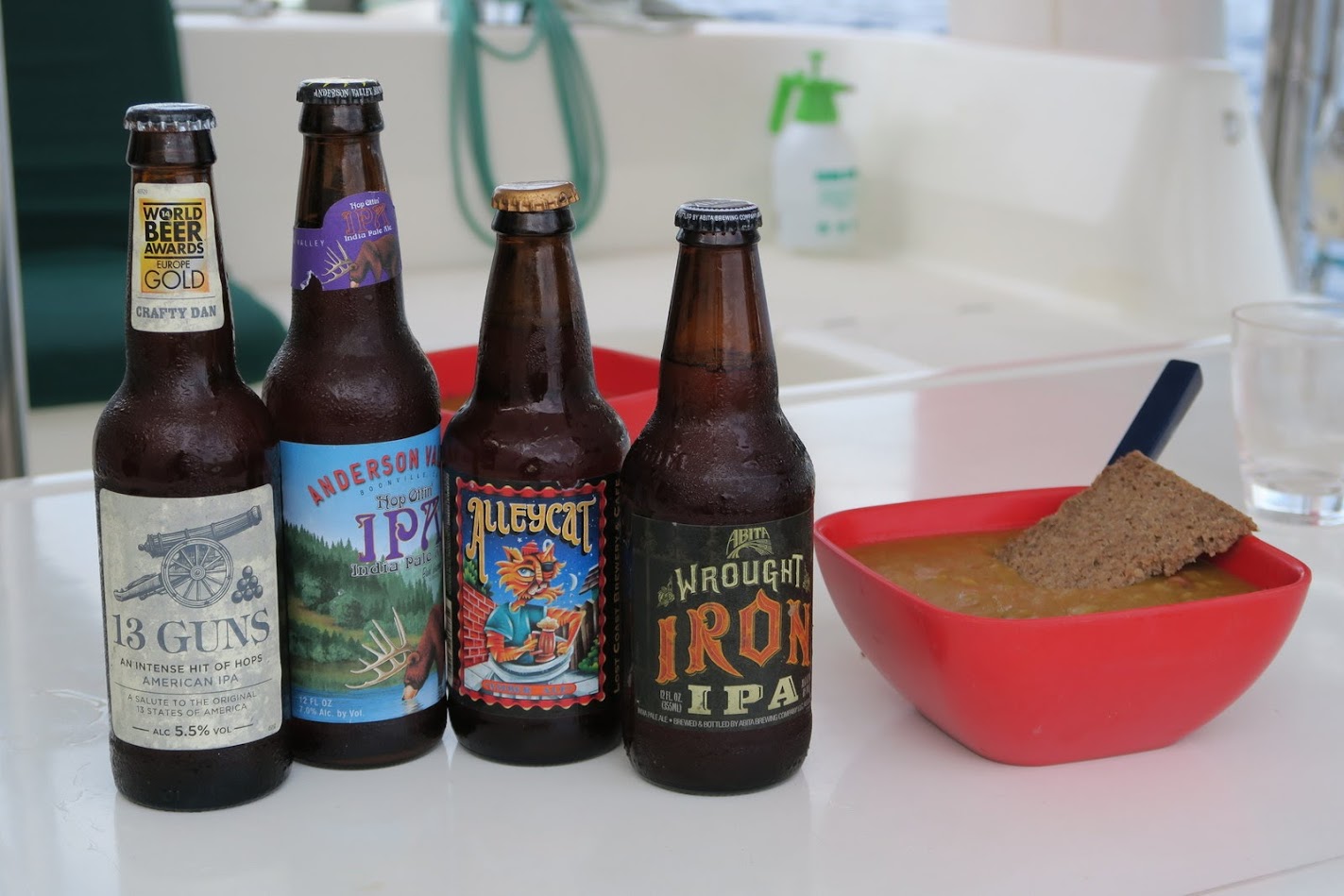 Day three was a nice sunny day with fair winds and Kenobi straight on target. While I was out in the front of the boat chilling in the sun I realized the boat was suddenly turning around. We had passed by a big school of fish and were turning around to catch some dinner. With the sails down we started chasing the school by following all the birds that were waiting on the surface water. We have met a few schools like this before but nothing this big and intense. The surface was all foamy with water splashing around, the water was really boiling this time. We made a few runs through and caught three decent sized tunas, two Skipjacks and one Bigeye. Next day we made a great sushi dinner with spicy tuna Maki, tuna nigiri and tuna sashimi, finally got to use the sushi kit we bought several months ago… Is was a good treat half way through the crossing. 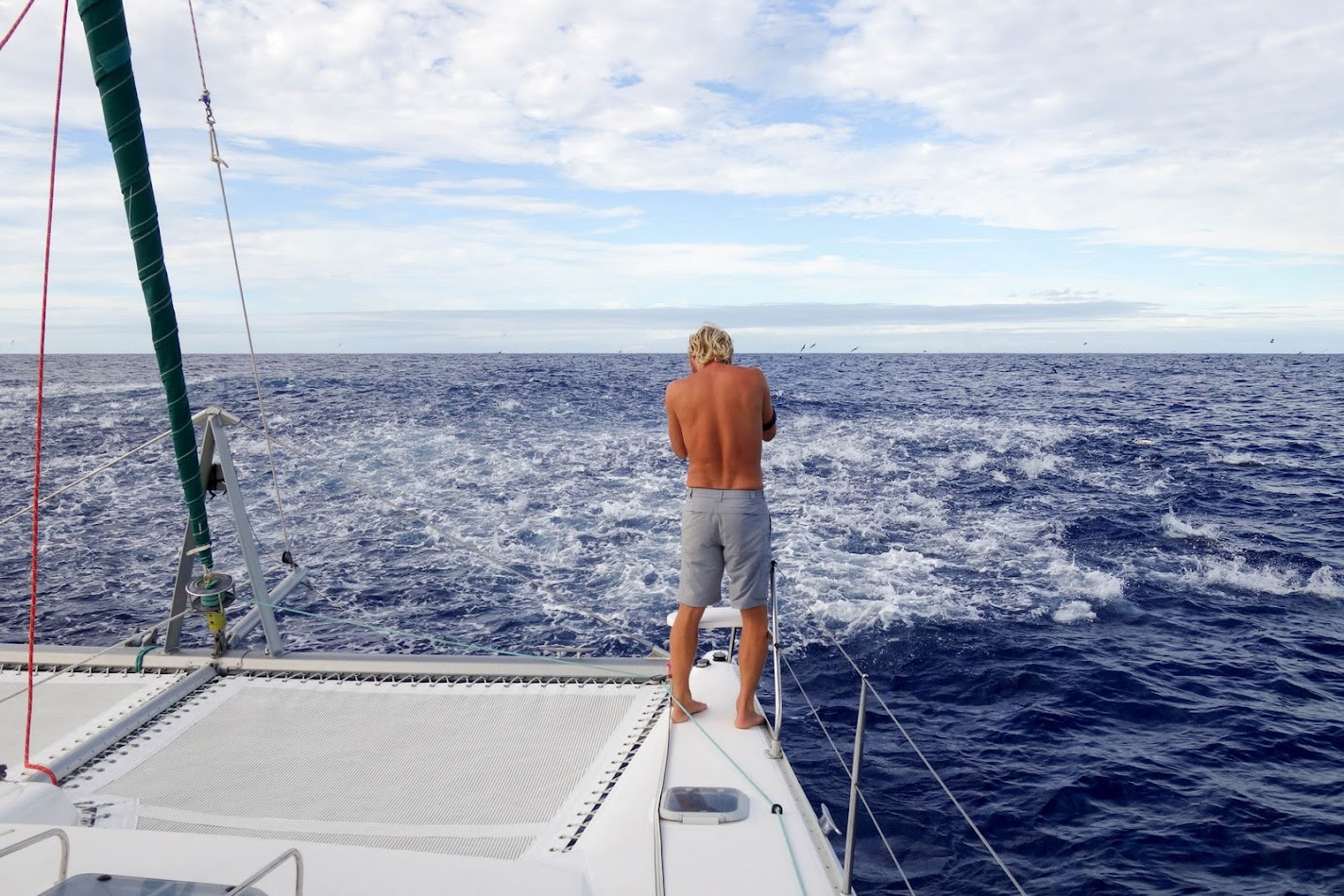 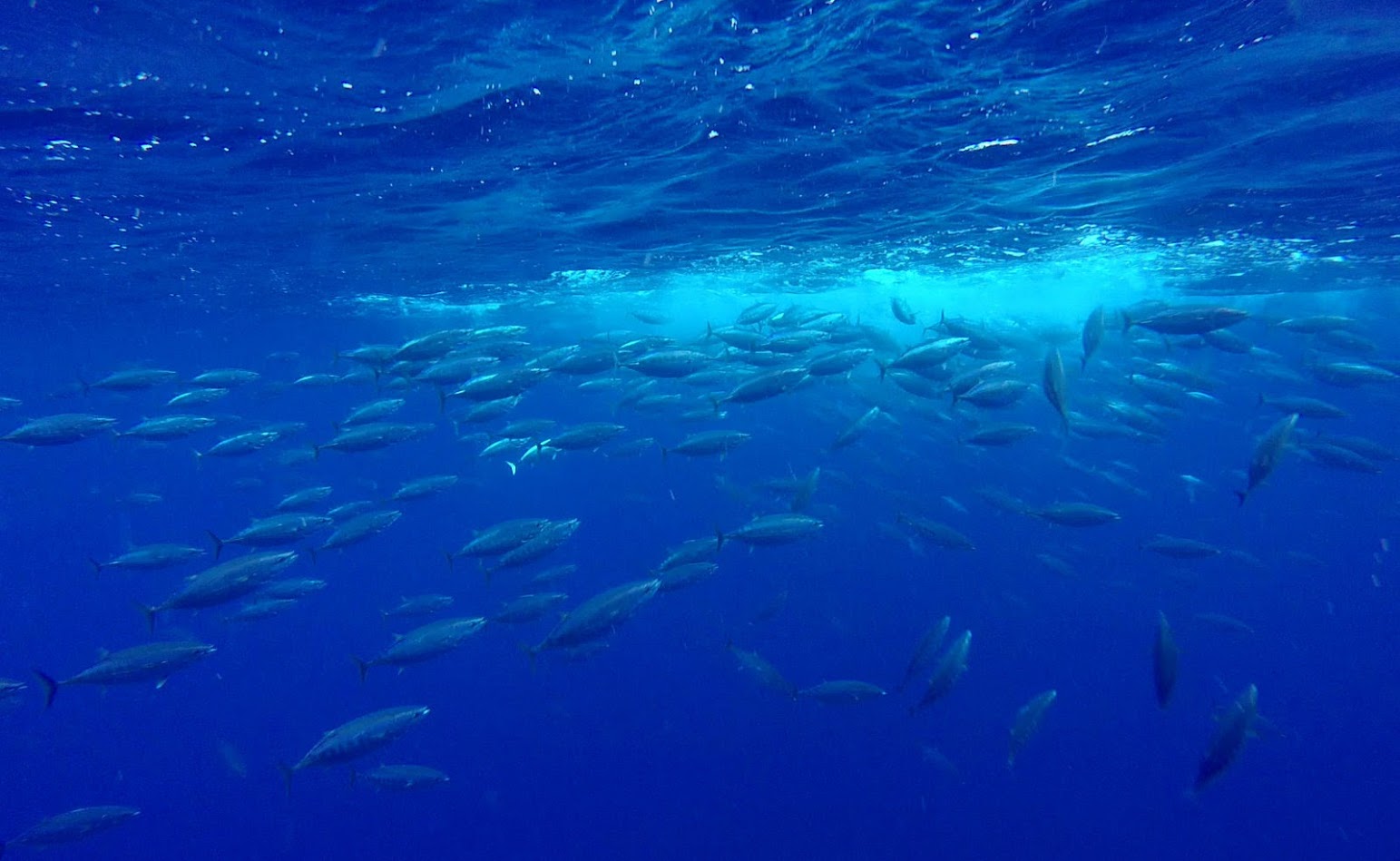 Underwater shot of the school.

The waters between Tonga and Fiji and the eastern part of Fiji are known for being dangerous navigating due to a lot of unchartered reefs not marked out in most charts available. Good thing captain Lukas was doing a lot of research and got hold of some extensive information with charts and waypoints we could import to our navigation equipment. It´s really good that there are cruisers out there who gladly share their knowledge and experiences. Some of these cruisers really take this task seriously and make information compendiums, make their own charts of passes and anchorages and so on. This makes us feel completely safe navigating in these waters now. The two main sources of information for this part of the pacific are “Soggy Paws” and “Mr John”. “Soggy Paws” make compendiums with information they gathered from their own and other cruisers’ experiences, for Fiji their compendium is 317 pages! No other published cruising handbooks are this extensive (See http://svsoggypaws.com/files). “Mr John”, besides writing information texts, also illustrates his own charts over areas where the regular charts and pilot books are non-existing or unreliable. These are really nicely done and have been really helpful in places. See example illustrations below.

Fiji covers a big area and offers a lot of different cruising grounds. There are a few bigger islands and numerous small islands, atolls and coral reefs to visit, most of them are in the west part of the archipelago. In the east and southeast is the remote group of islands called the Lau group. On these islands the people live traditional and simple lives with limited contact with, and interference from, the tourism of mainland Fiji. That’s why we wanted to go there. Read more about these islands in upcoming blog post. The problem with going to Lau is that you first need to go to one of the official ports of entry, all situated in the western part of Fiji. You then need to find a proper weather window to sail the 200M south east in this area of prevailing south easterly winds. We heard of other cruisers waiting two weeks for the right time to go there. We just have to hope the weather is with us this time! We are going to the city of Savusavu on the second biggest island, Vanua Levu, to check in and get our cruising permit arranged.

We sailed through the belt of Fijian islands to the east and entered the Koro sea in the middle of the night on day 5. Waking up in the morning of day 5 I felt the boat moving quite a bit, the wind had picked up big time and the rain was pouring down. The wind indicator went up to 34 knots (17 m/s) and we were speeding down wind. Because we did not want to arrive in Savusavu in the middle of the night we slowed down the boat by hoisting the small storm jib. Now we had quite a calm ride, sitting inside the salon reading a book and drinking coffee sheltered from the bad weather outside. Only in a catamaran… 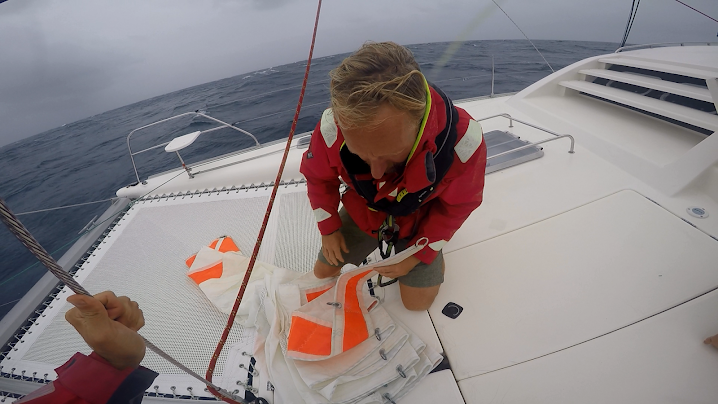 Hoisting the storm jib. Just because it is cool, we sailed with two head sails for a while...

Eventually the conditions calmed down later in the afternoon, during the night the wind died off completely and we motored the last couple of hours. I was at the helm during the approach to Savusavu and the sun came up just as I was about to enter through the reef into the bay surrounding the town. The sunrise is always beautiful but there is something special about arriving at a new place with the sun unveiling the new surroundings. The lavishing green mountains and hills of Fiji Vanua Levu was no exception. 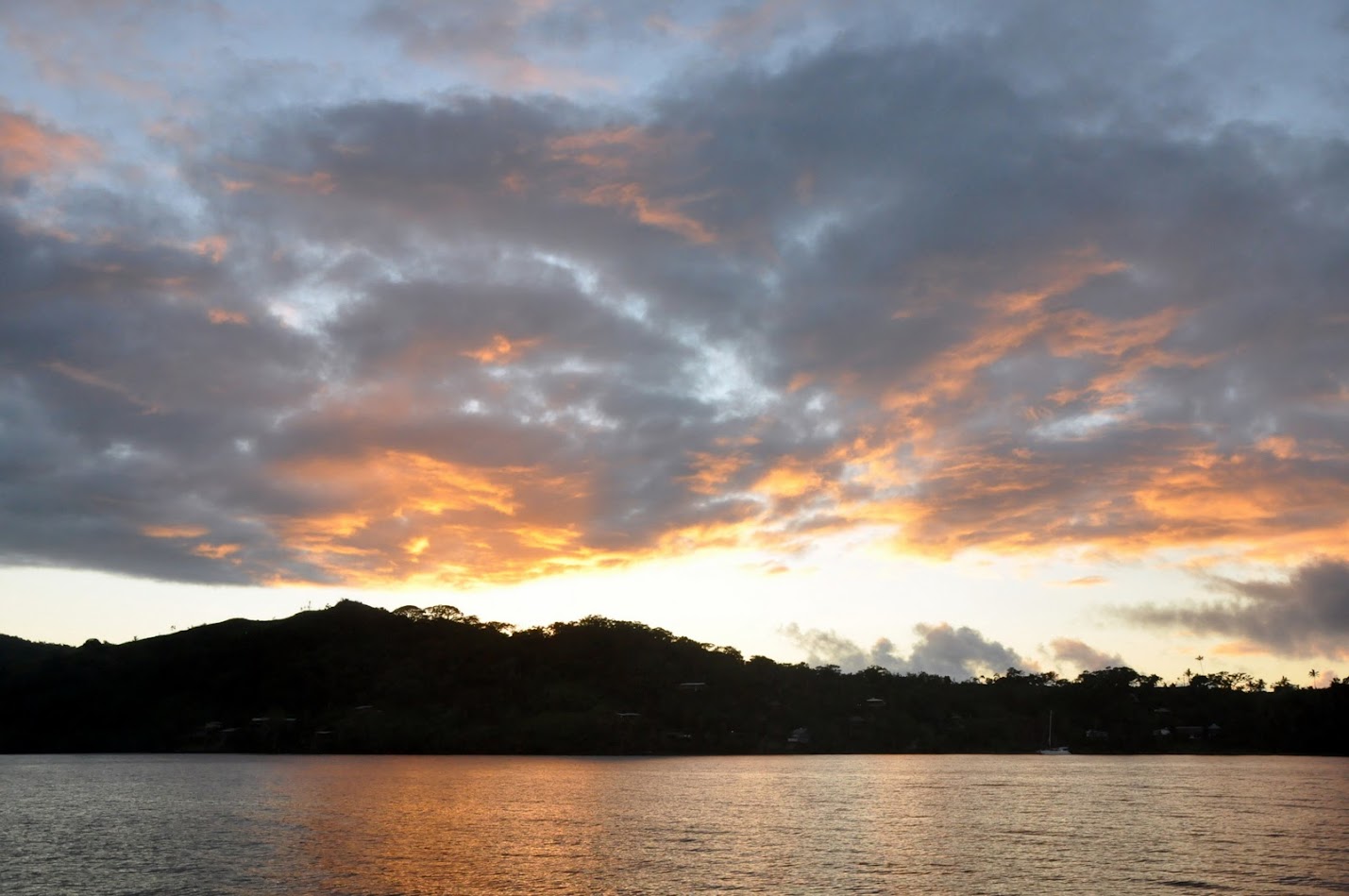 We picked up a mooring buoy outside the Copra Shed marina and waited for the customs to arrive for the check in process.