Passage to Aitutaki and the Big Tuna

It’s unbelievable what a difference an autopilot does. 6 more hours a day to do stuff, instead of being chained to the steering wheel. Steering by hand when the wind is fresh or monkey-gripping the wheel with one foot in weak winds, trying to keep a steady course as you keep watch over an empty ocean and your mind starts drifting. There are also good things to be said about steering manually. You experience the sailing and the traveling more. The sea, sun, moon, stars etc etc. But it’s always nice to have a choice. And to be able to go to the toilet when everyone else is sleeping.

During this crossing the winds were light and the autopilot did the work for me. I’m reading three books at once in my Kindle, difficult ones too. I’m writing excruciatingly detailed descriptions of the sailing, the waves, the weather, feelings etc in my personal journal. Finally I even got to writing that Fishing Tips page for this site I’ve been meaning to do since the start of this blog, heres a link to it: Fishing Tips. Also more time to focus on the fishing, try some different techniques. More on that later.

The calm conditions on this slow passage also affected the mood of the crew. In the beginning there was much resting and digesting all our experiences of French Polynesia. We knew we were leaving a special place and period in this trip. Had it been the culmination of the trip already? When we were together in the cockpit during the days we were talking about all the things that had happened but also about The End - Australia and the future in general. 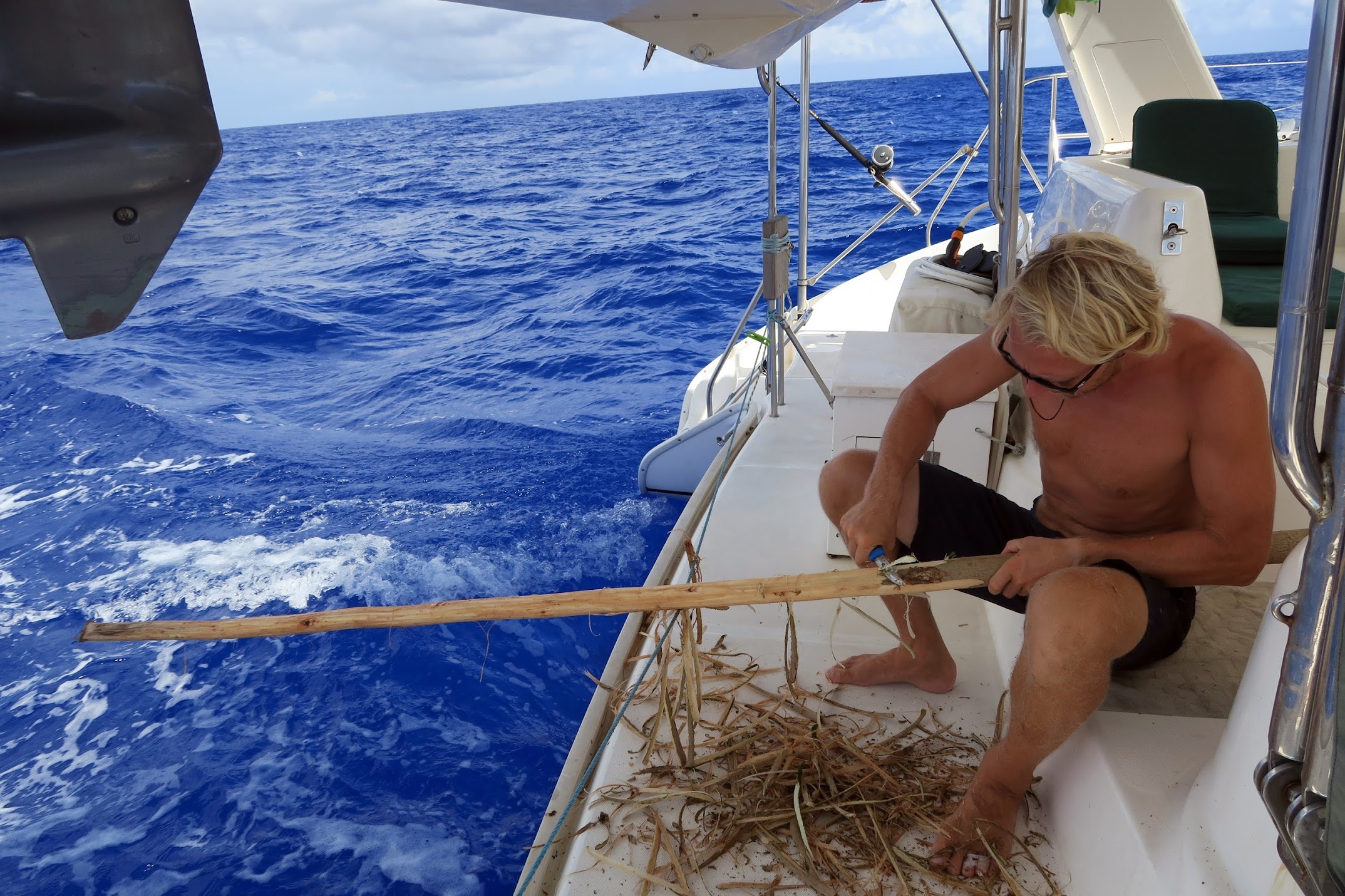 The carpenter at work making a new and sturdy flagpole for our huge new Swedish flag.

The wind was weak but from the back and fills our gennaker (light-wind spinnakery sail) nicely, we only do 4-5 knots most of the time but at least it’s straight on target. The gennaker stays up all of day one but we take it down for the night since there are squalls here and there. Some hit us but the wind only reaches 16 knots. So on day two we decide to leave it up for the night, it’s late in the season and we really want to get moving… Bad call it turns out, Hampus wakes me at 22:30, and tells me the gennaker has ripped. Everyone are in the trampolines pulling the sail out of the water. There had been a squall, not too strong but it changed the wind direction, the gennaker had lost the wind and flapped, when it filled again it ripped. Horizontally two meters from the top and following the red and green bands on the sides a couple meters down where the huge hole was completed by another horizontal tear. Shit, this looks like the end of our beloved gennaker. By now the rain is pouring down on us as we secure the soaked sail on the trampolines for drying in the morning. 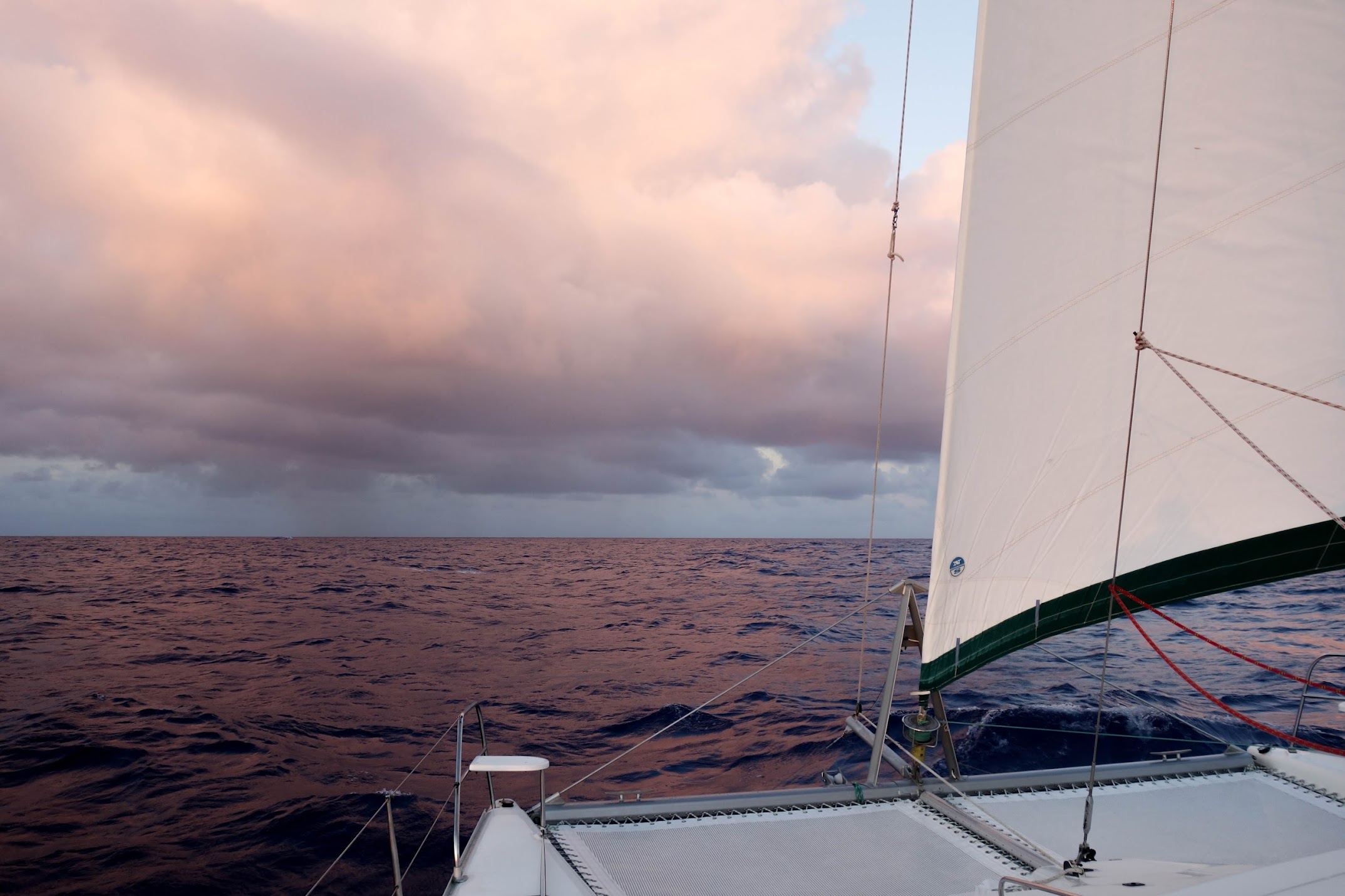 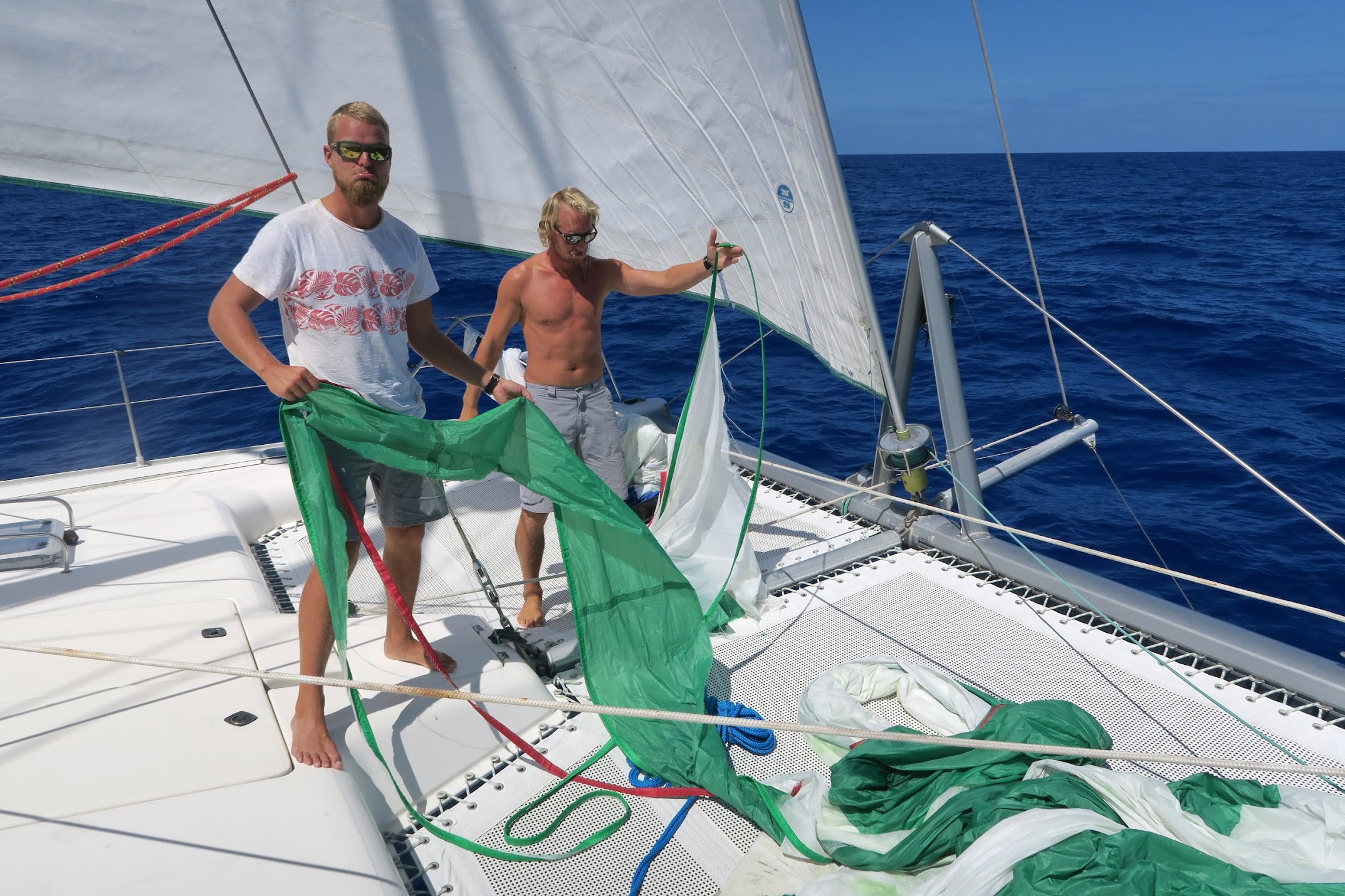 ...and a ripped gennaker.

Fishing wise we hadn’t had a bite at all the first two days and it was a long time since we caught a good fish on Kenobi. Our speed wasn’t helping, without the gennaker and weak wind straight in our back we just had the genoa out and were Kon-Tiki drifting at 3-4 knots. I never catch fish under 5 knots of speed using my usual squids so it felt pretty hopeless. Then I remembered talking to Max on Big Fish in Fakarava, he always use vobblers when going slower. So I exchanged the trusty squids for a blue/silver Yo-Zuri and the new gold/black Halco I bought in Bora Bora (same as Tearenui used on the potimarara in Huahine!). They were running nicely all day on day three but no luck. Day four I thought of a discussion with master lure-maker and fisherman 2socks in Martinique. We talked about teasers and he would use them in slower speeds, when the boat itself did not create much of a bubble trail in its wake. I don’t have any real teaser on board but I took out the largest marlin-size squid i have, it has a chugger head that splashes a lot. Then before the lure i put a daisy chain I had made with three small hookless yellow squids (pic on Fishing Tips page). I put this rig close to the boat so the big squid was splashing a lot in the surface and the daisy chain was in and out of the water. Ten meters behind this made-up teaser I put the golden Halco, swimming in a steady motion three or so meters down.

After two hours something really strange happens. I’m alone in the cockpit and watching the lines when I see two small mahi-mahi come jumping in the surface towards the teaser! Once there they start attacking the hookless squids of the daisy chain. I go for the camera to capture this spectacle and then the Halco gets hit. At first i think it’s one of the mahi-mahis but this one is pulling line off the reel at a fast speed. When I tighten the drag on the reel the fish goes off to starboard, turning the rod holder all the way around where it is mounted on a rail. So it is a very strong fish. Now everyone have heard the noise from reel and me so we start the full stop-boat-and-fight procedure, dropping sails and starting engines. Johan helps me get the gimball belt on and now I can put some real pressure on the fish. But it doesn’t move an inch! Just stays put far down, by now we all know that means we are onto a big tuna. Not much to do, I can feel the line is at the breaking point so I just keep the pressure on the fish and move up to the foredeck where there is less obstructions. Hampus steers the boat expertly and we are able to follow the fish and take in some line that way. I’ve never caught a big tuna on a vobbler and I’m axious about the hook, I know the smaller treble hooks are not as strong and secure as the big Mustad hooks on the squids. Don’t want to put too much pressure but still - in order to get any line back at all I need to pull so my whole body is aching! This seems to go on forever, I painfully take some line and the fish does a run and takes it back. It’s been more than thirty minutes before we even see the fish, dark blue, far, far down. After 45 minutes of fighting the fish starts circling, coming closer to the surface for each circle it swims. Johan is ready with the gaff and lies down on the trampoline to reach the fish right below us. He drives the gaff into the back of the fish and then the fish comes alive and does a run, Johan holds on hard to the gaff but is almost dragged off the boat! Together with Simon we lift the fish into the trampoline - it’s unreal how big it is! The vobbler is hooked off and I see that two of the hooks had been bent out of shape, what a strong fish. Simon sits on the fish holding it in some kind of wrestler grip, I hold on to the tail that is now thrusting rapidly, hitting my arm once so it swells up. Johan gives it a dose of alcohol in the gills and after the last seizure-like thrusting it is still. 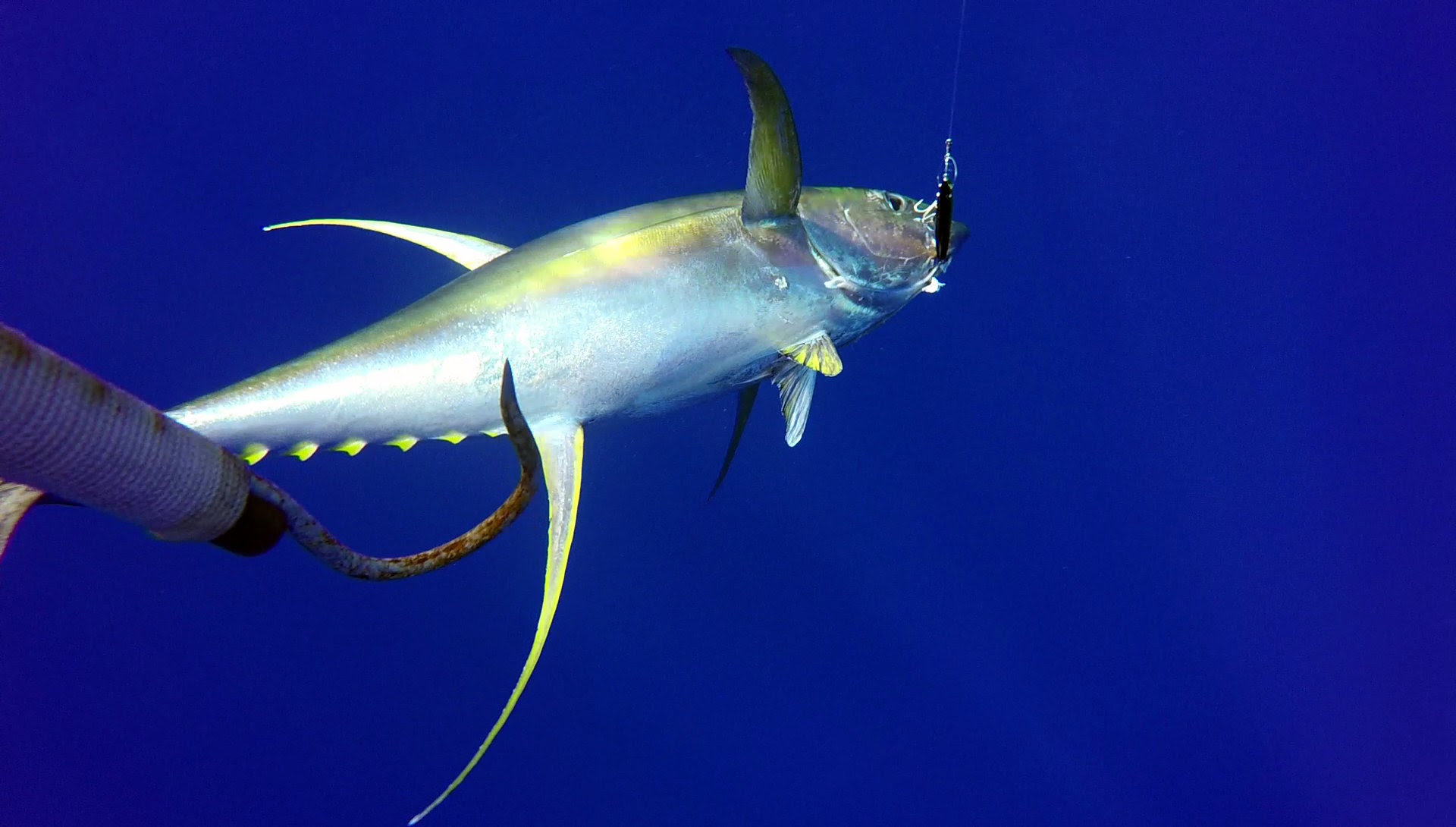 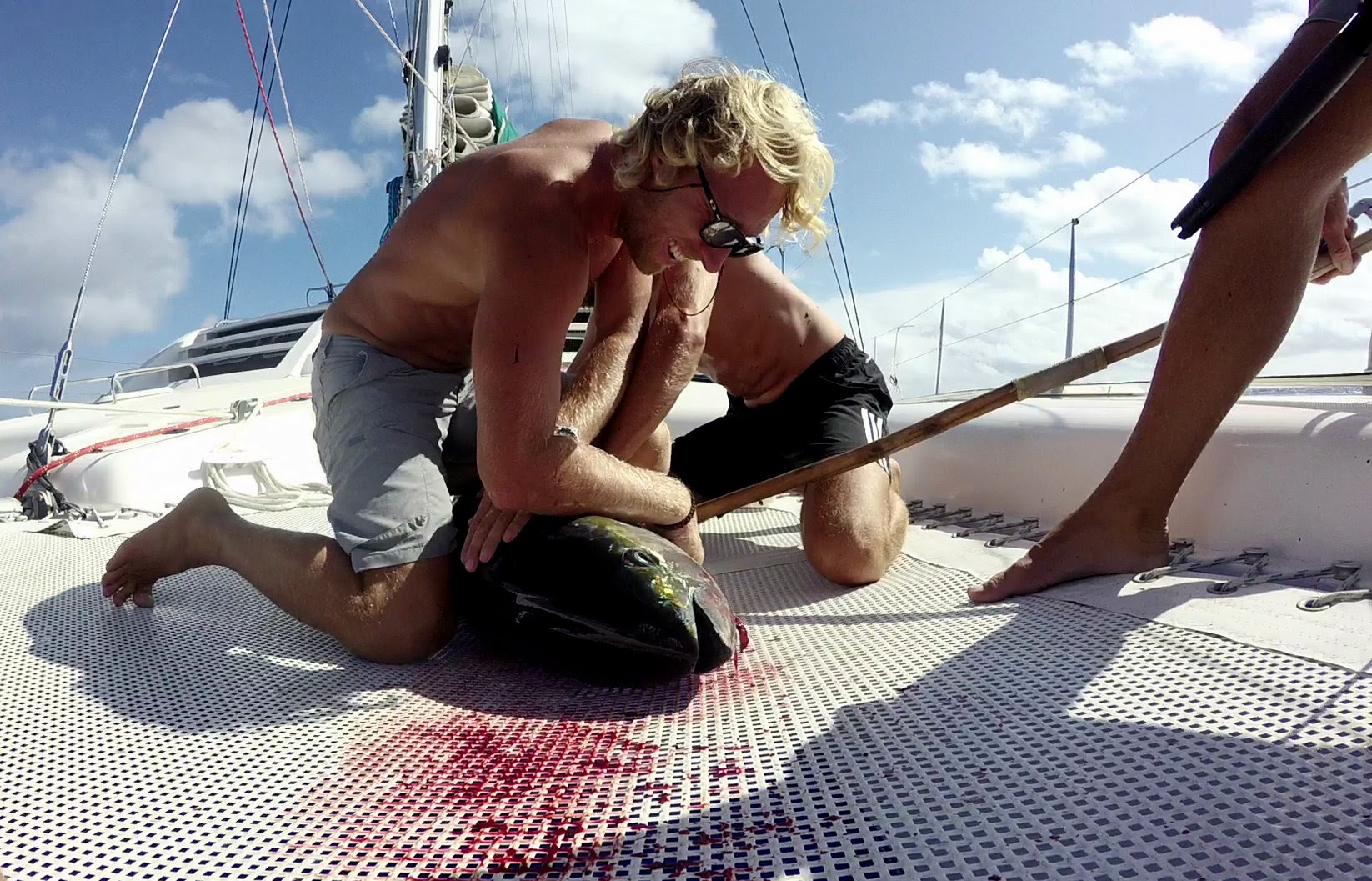 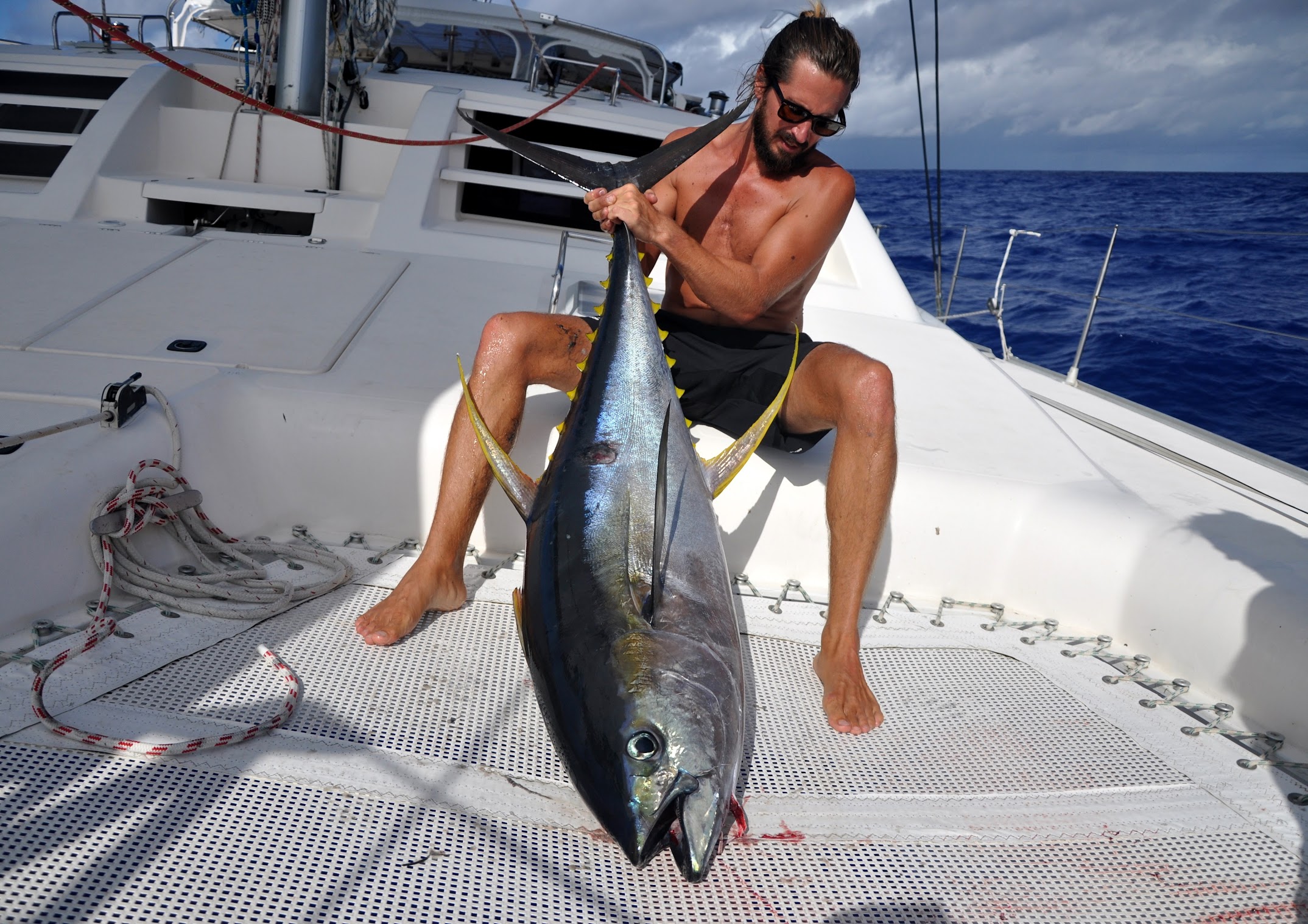 By now it’s five o’clock and the wind has returned. We roll out the genoa and cruise along in a steady 5+ knots while Kenobi Fish Factory gets to work. The weighing has to be done incrementally since the scale is too small, 44 kilos is the final conclusion! 154 cm from head to outer tip of tail. I cut out fillets, Johan skins them, then Hampus and Simon it the kitchen gets them. There much is put in boxes at the bottom of the fridge (that is now cranked up to eventually get as cold as 5 degrees). About six kilo we pickle in vinegar and another couple of kilos we prepare for drying. At 19:30 all is done, boat cleaned of blood, gear cleaned and put back and I have a shower at the aft deck to get rid of the blood and the slime. 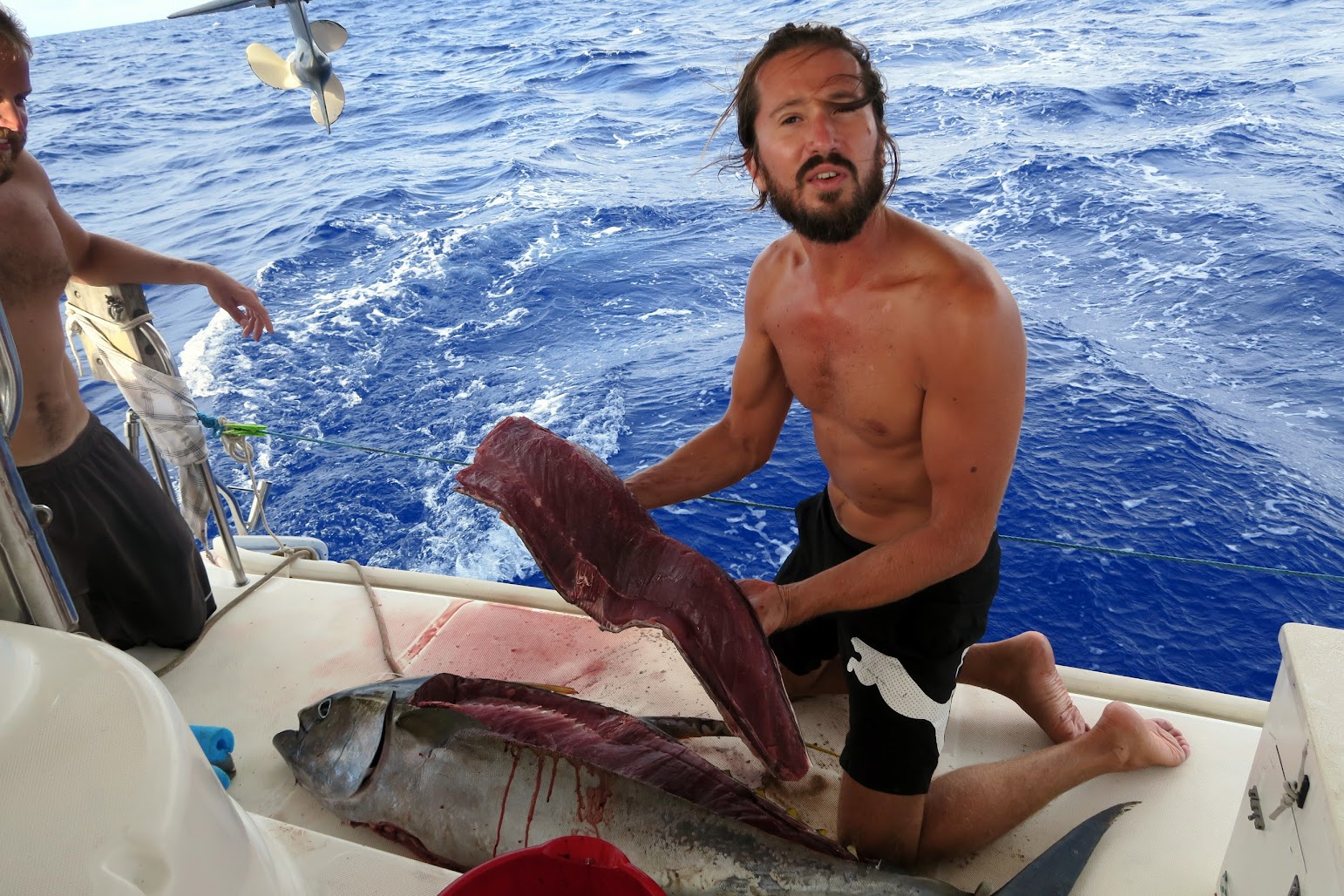 A LOT of food! 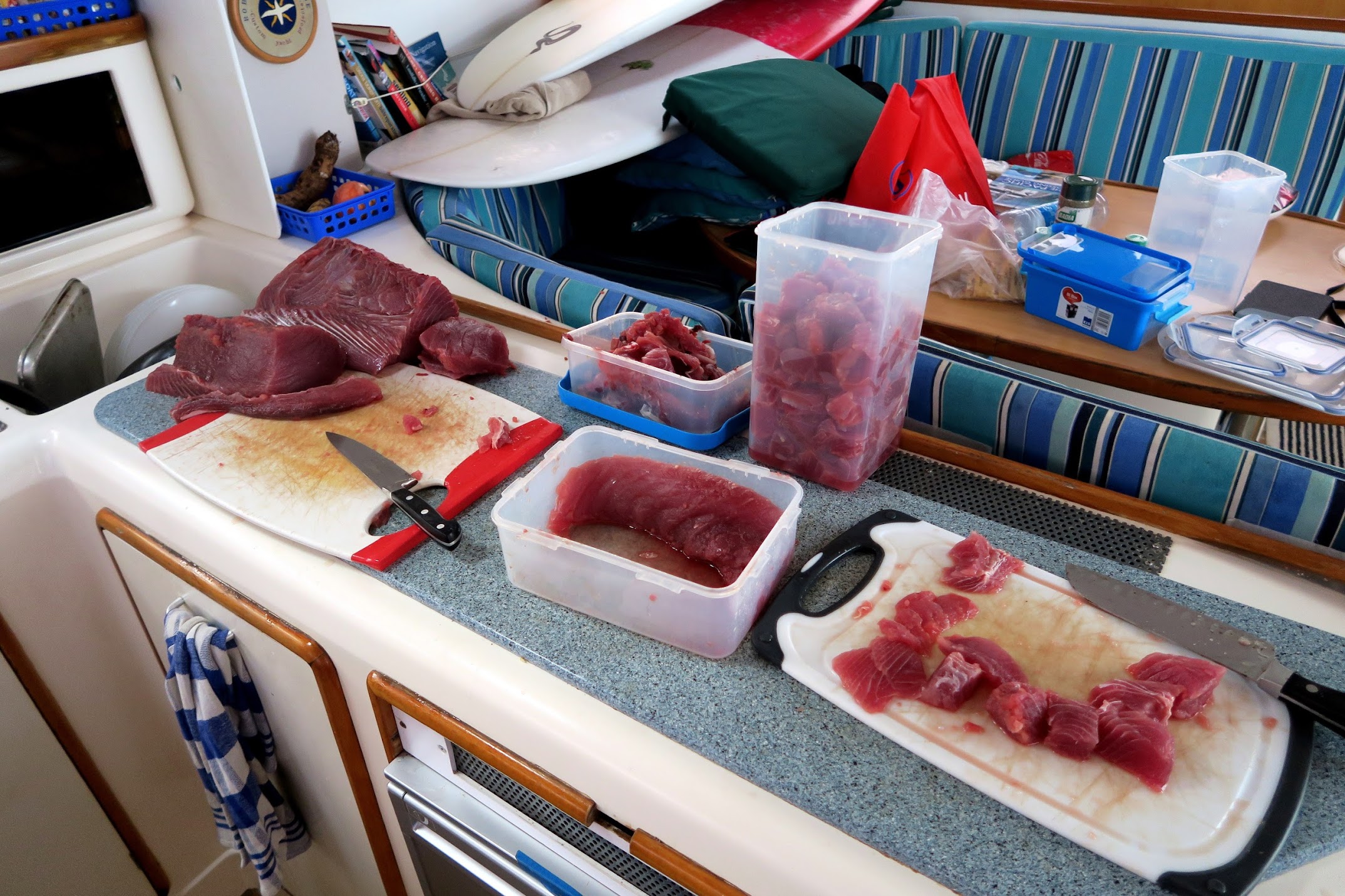 Tuna belly with garlic and herbs - what we call "ventreska". See how it comes apart on the plate and still a little pink? Perfection. 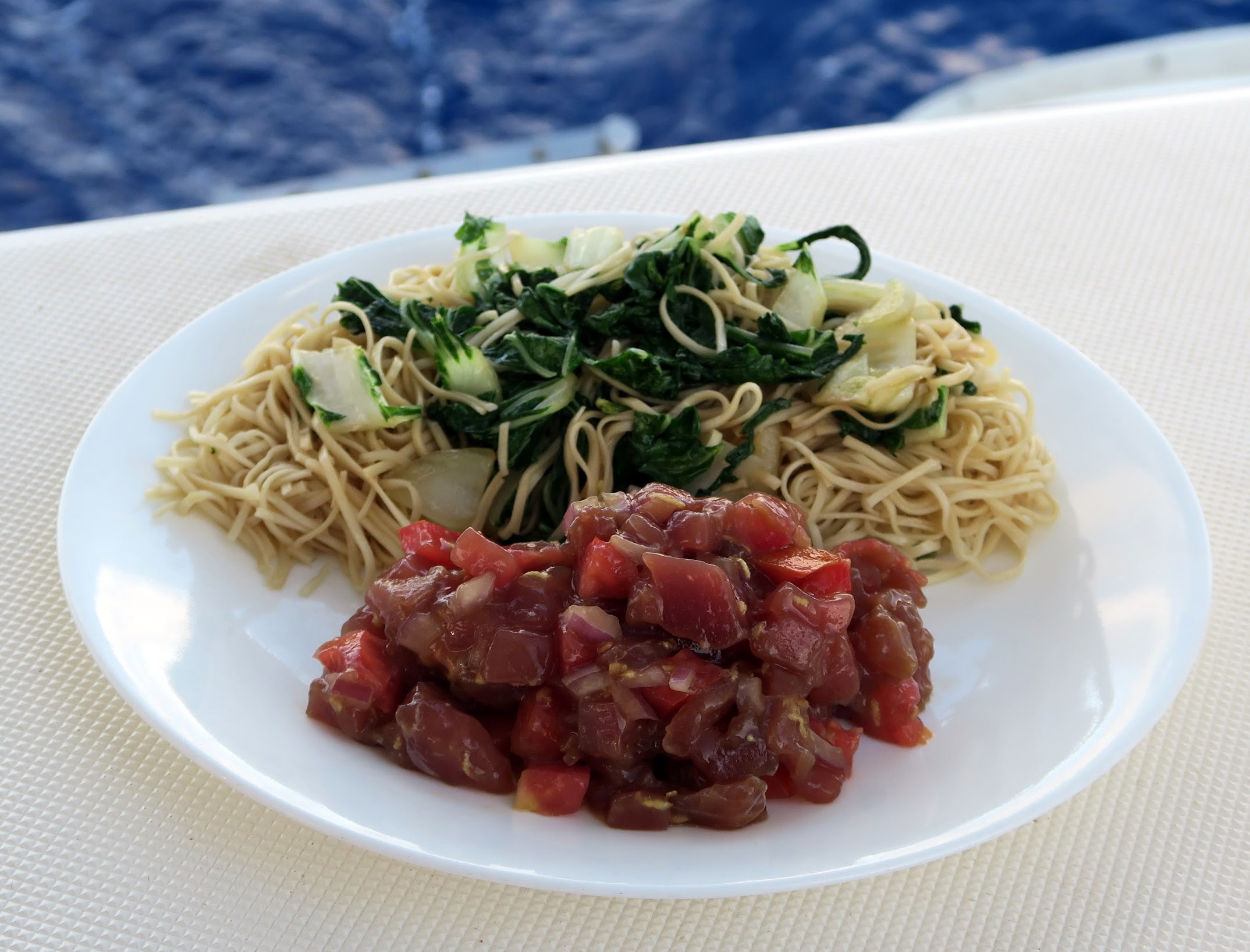 Hard life in the sea. Asian tartar (maybe more like a pile) with noodles and bok choi-ish veges.

Simon cooks up the best ventreska ever - the tasty fatty belly meat that melts on your plate. This time it’s big enough to be the whole meal. Then I get ready for the 21-00 shift. Autopilot is doing the work, I just have to keep my eyes open which is proving difficult. On a round of the boat I notice something strange at the back of the boat. I had cut off a couple of the fins to hang and dry and they were in a bag at the stern. Now they were glowing fluorescent! Not the blood but the white fibrous skin-tissue where I had made the cuts. When Simon came up to relieve me I had to show him - I couldn’t get any good photo in the dark and wasn’t even sure myself if I was dreaming it. But they were still glowing and it would rub off on your finger if you touched it. Super strange, maybe it been swimming close to the nuclear test atolls??

In the morning of day 5 we anchored outside the Aitutaki pass, awaiting the high tide to help us through, it’s definitely the sketchiest pass we have attempted so far. 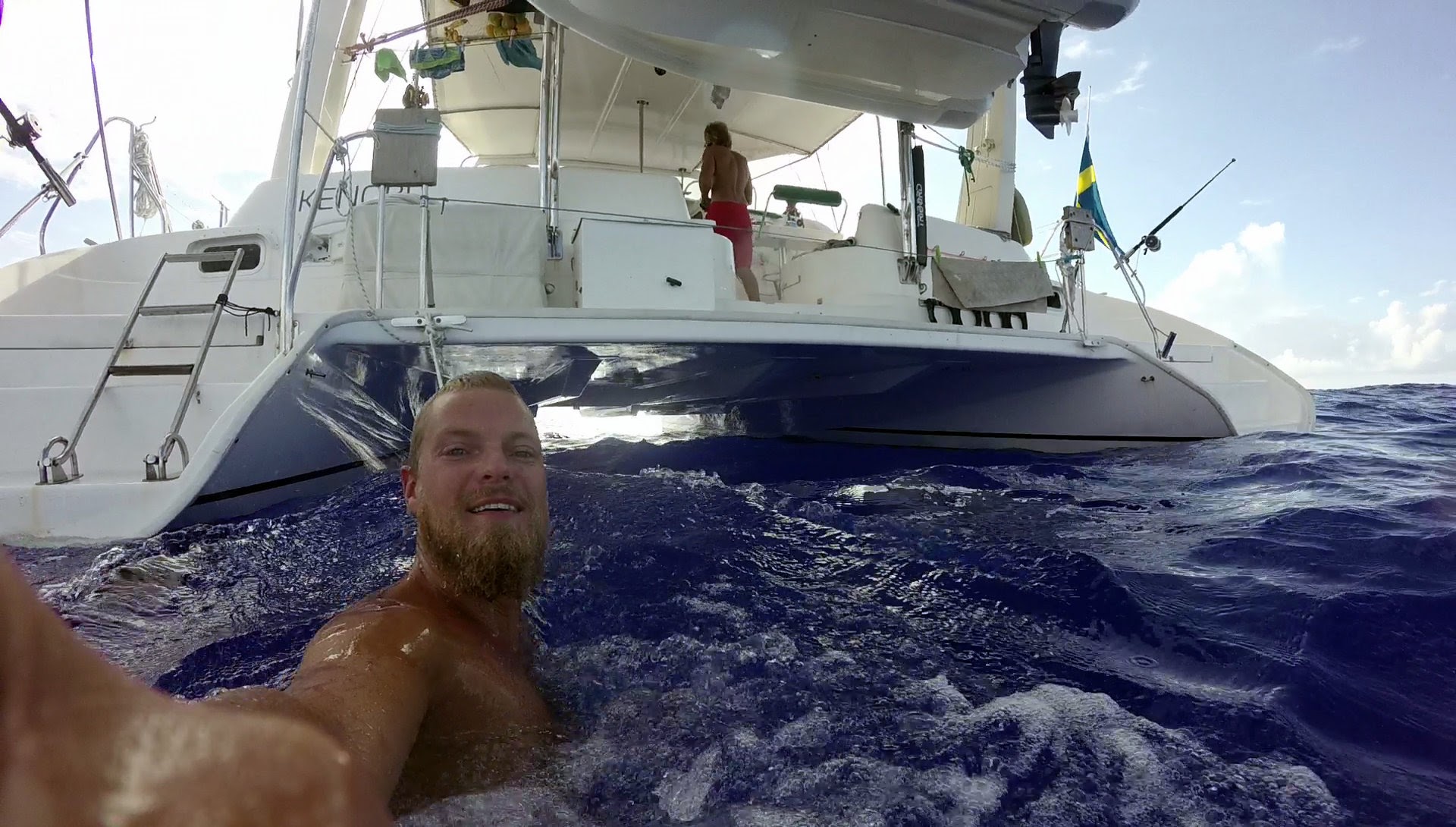