The uninhabited and unspoiled atoll of Tahanea, which is a national park, turned out to be all as nice as we hoped for but our visit here came to an end earlier than expected when the wind turned, forcing us to leave through the pass only 24 hours after arriving.

We had a bold plan leaving Makemo during the morning slack tide and enter at Tahanea, some 50M away, during the next slack six hours later. To make it we had to average 8,4kn, which would not have been a problem in the forecasted 18-20kn southeasterly winds but they turned out to be a bit lesser. We hoisted all sails but could only do about 7 -7.5kn. Too slow. Our back up plan was to head for another atoll closer to Makemo but we decided to continue, we had read that the pass at Tahanea could be navigable even off perfect slack in the right conditions. In contrast to our overnight sail to Makemo where we had to slow down the boat, we were now trimming the sails as much as possible to speed up. We arrived about 1,5h late finding a strong outgoing current. Even so, we managed to enter in quite calm waters keeping very close to the east side of the channel. 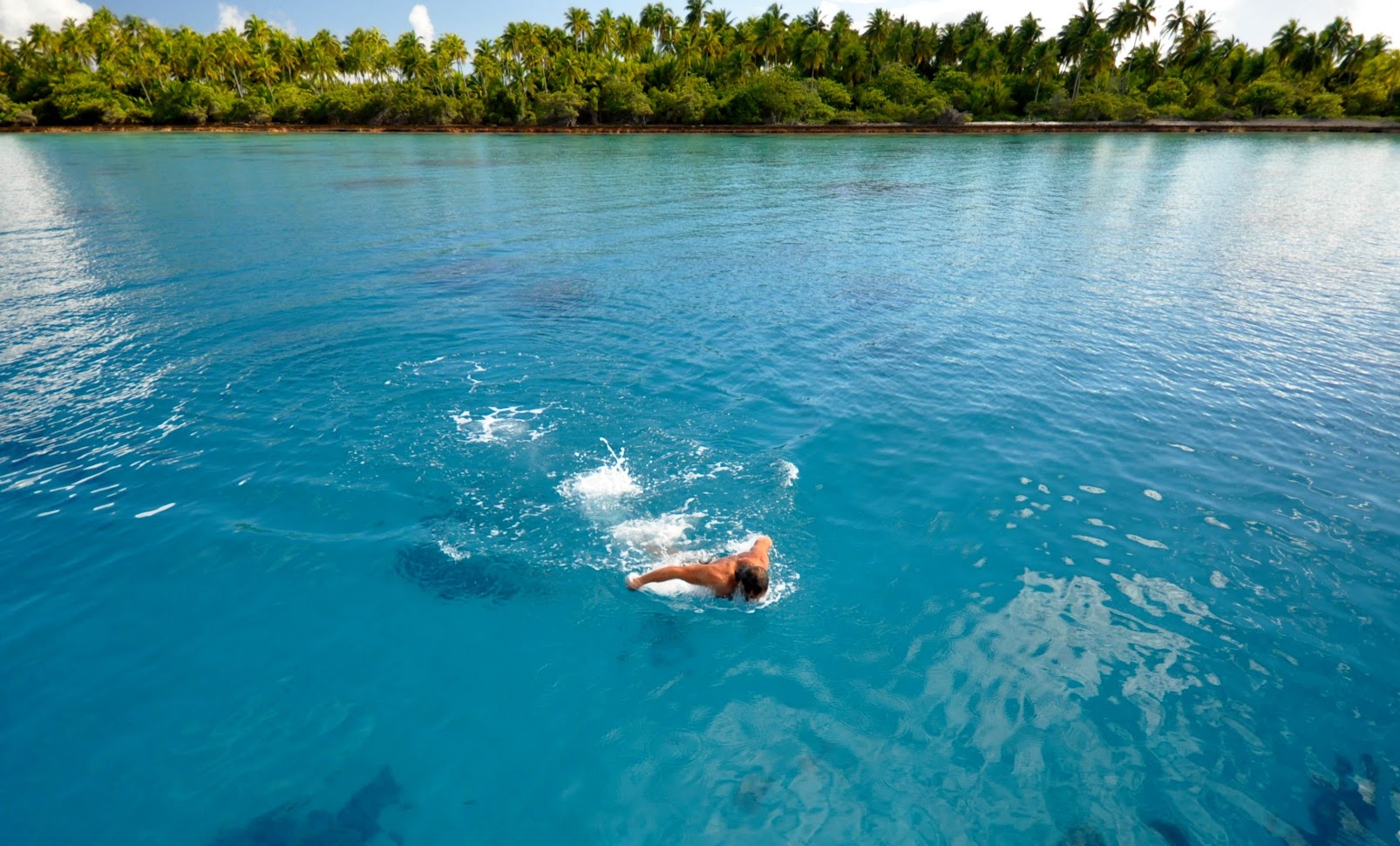 Johan going for a morning "butterfly" swim. Like a pro!

The fishing Gods were with us. Leaving Makemo we caught a nice 4,7kg green jobfish (a kind of snapper) in the lagoon trolling close to a reef, this was a new fish to us and at first we could not even find it in our fish “dictionary”. In Tahanea the fishing was crazy, the absence of a village and few visitors has made the fish both abundant and undaunted. Lukas and Simon went right into the water with spear guns and came right back up again with one nice grouper each. The fish basically swam right up to them being curious, quite easy targets. Soon after, the sharks started gathering. Becoming too interested in the hunters activities, they head back to the boat. New strategy was bottom fishing with a rod from the boat. 20 seconds after the bait hit the water a fish was on. Of course the damn sharks got to it before Lukas managed to get the fish out of the water, taking the whole tackle with it... Next try Lukas got a fish hooked after 20 seconds again, this time it was a big one. Initially thinking it was a shark that hit but it turned out to be another green jobfish of 5kg. It was probably too big for the sharks to go after it so we could land it after a bit of a fight. Now we had some great food fish in the fridge. Lukas had another interesting fish experience when he fed some smaller fish from his hand at the stern of the boat and could just pick one up by its tail fin, amazingly fearless fish…

There are three passes right next to each other at Tahanea, all which are possible to drift snorkel or dive in an outgoing or incoming tidal current. We were anchored up right next to the most easterly pass so we decided to go there on day two. We put the snorkeling gear together and got in the dinghy after lunch. We drifted in the 3-4kn current starting at the edge of a reef at the inside of the pass and ended up at the other side of the pass about five to ten minutes later. One of us stayed in the dingy to follow and pick up the others at the end of the drift. The sea floor was covered in live and colourful coral and a lot of fish. This was a cool experience, you felt almost like being weightless in space doing acrobatic moves and flips while flying through the water over the floor of coral below. We did the drift 4 times before heading back to the boat, looking forward to doing this again at other atolls. 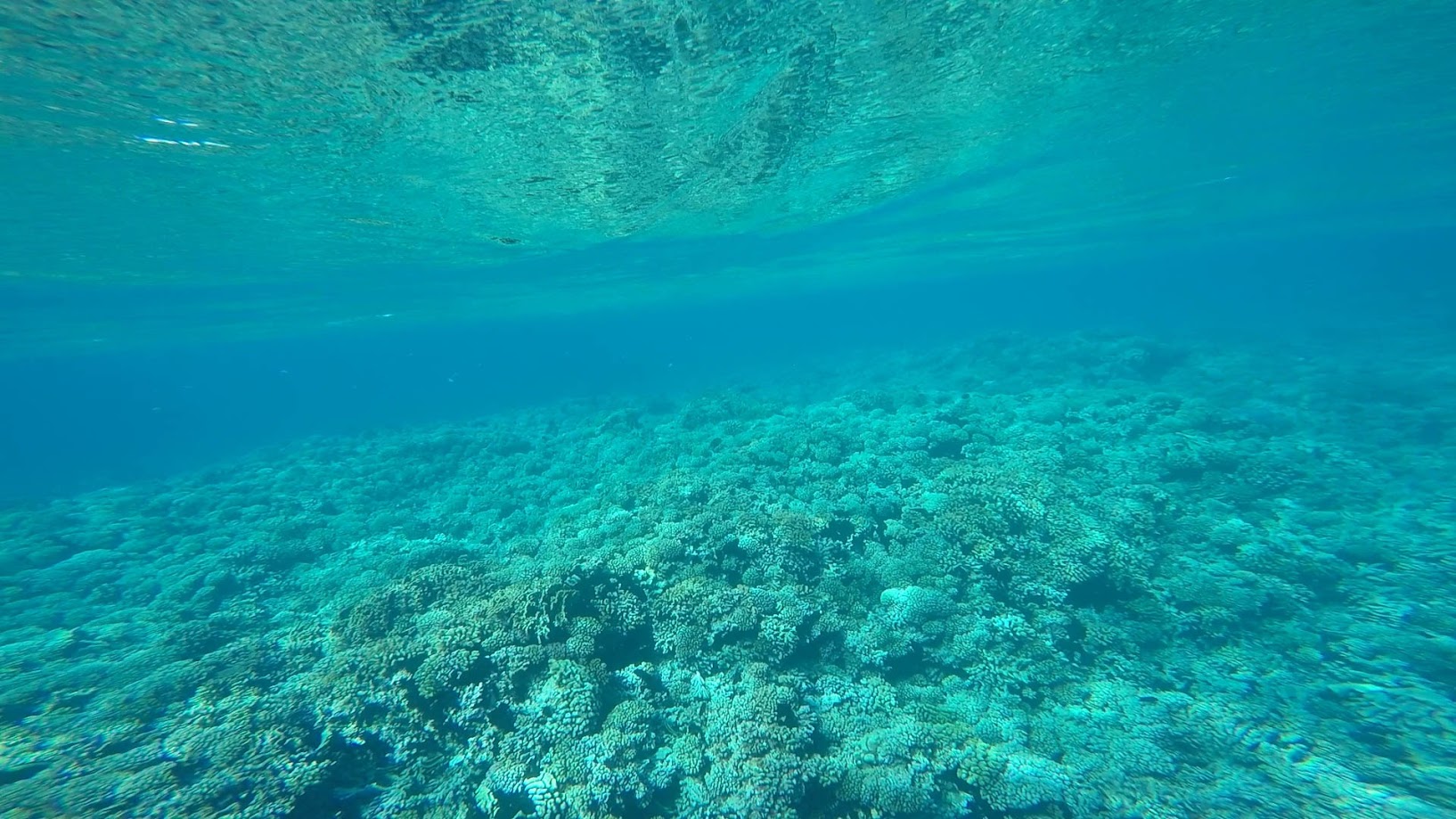 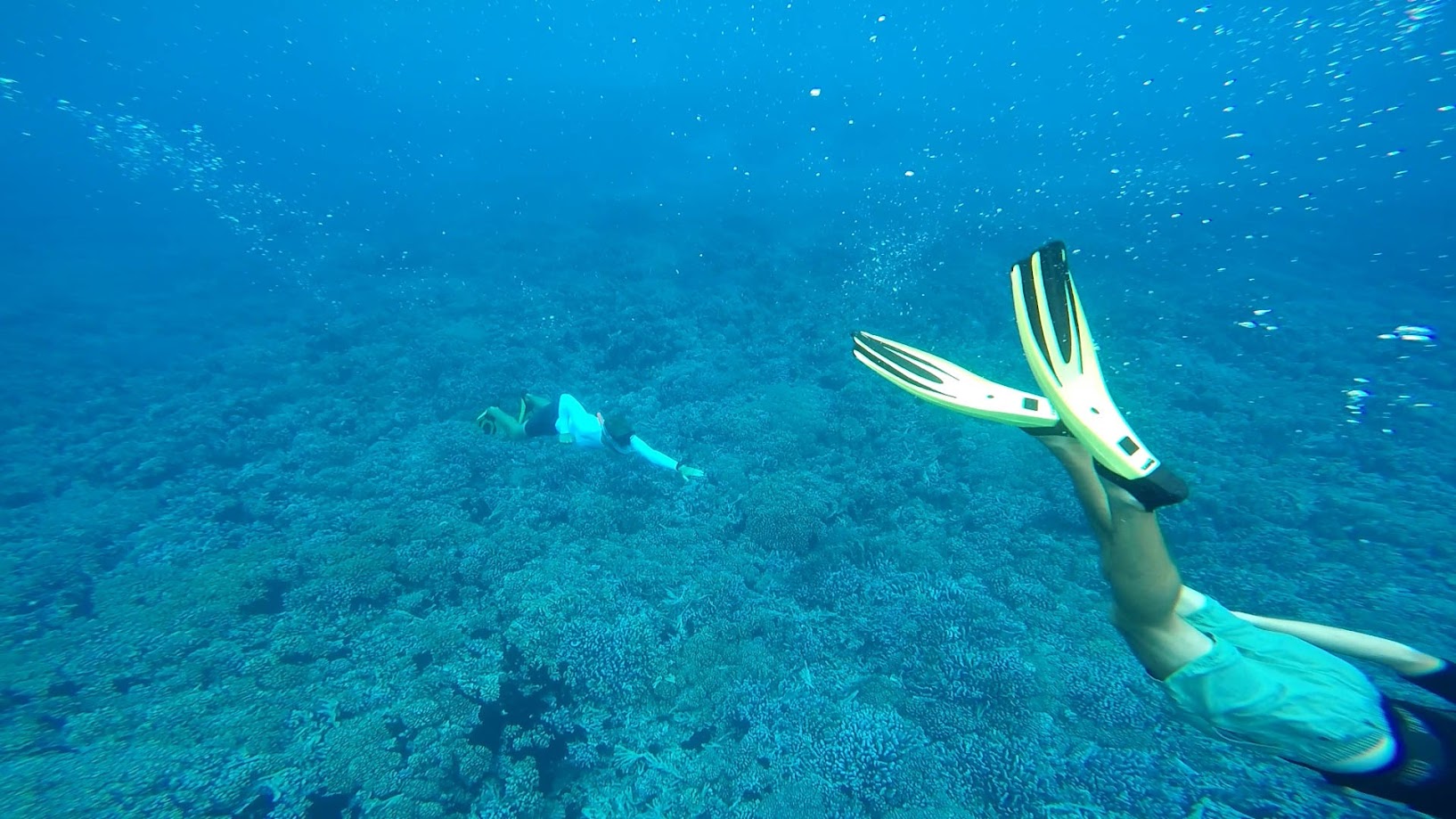 Drift snorkeling the pass in the tidal current.

When we arrived in Tahanea we had good protection at our anchorage from the northeasterly winds. Next day the wind shifted more to the south making our spot more uncomfortable. We first decided to stay since the wind were going to be pretty weak. Coming back from the drift snorkeling quite late in the afternoon we realized we were too close to a shallow coral head to feel completely safe. We pulled the anchor and left for another anchoring spot 30min away which were more protected. Upon arrival we could not find a good spot to drop the anchor, the bottom was covered with coral heads which we would definitely wrap our chain around. The sun was almost setting so we didn’t have time to change spot again, we realized the best option was to leave through the nearby pass and set sails for the next atoll of Fakarava. It was a pity to leave this beautiful atoll early but this time the weather beat us. From now we will have more respect for turning winds and seek protection earlier.

We got ready for another calm overnighter, also this time about 50M to cover before arriving at Fakarava. 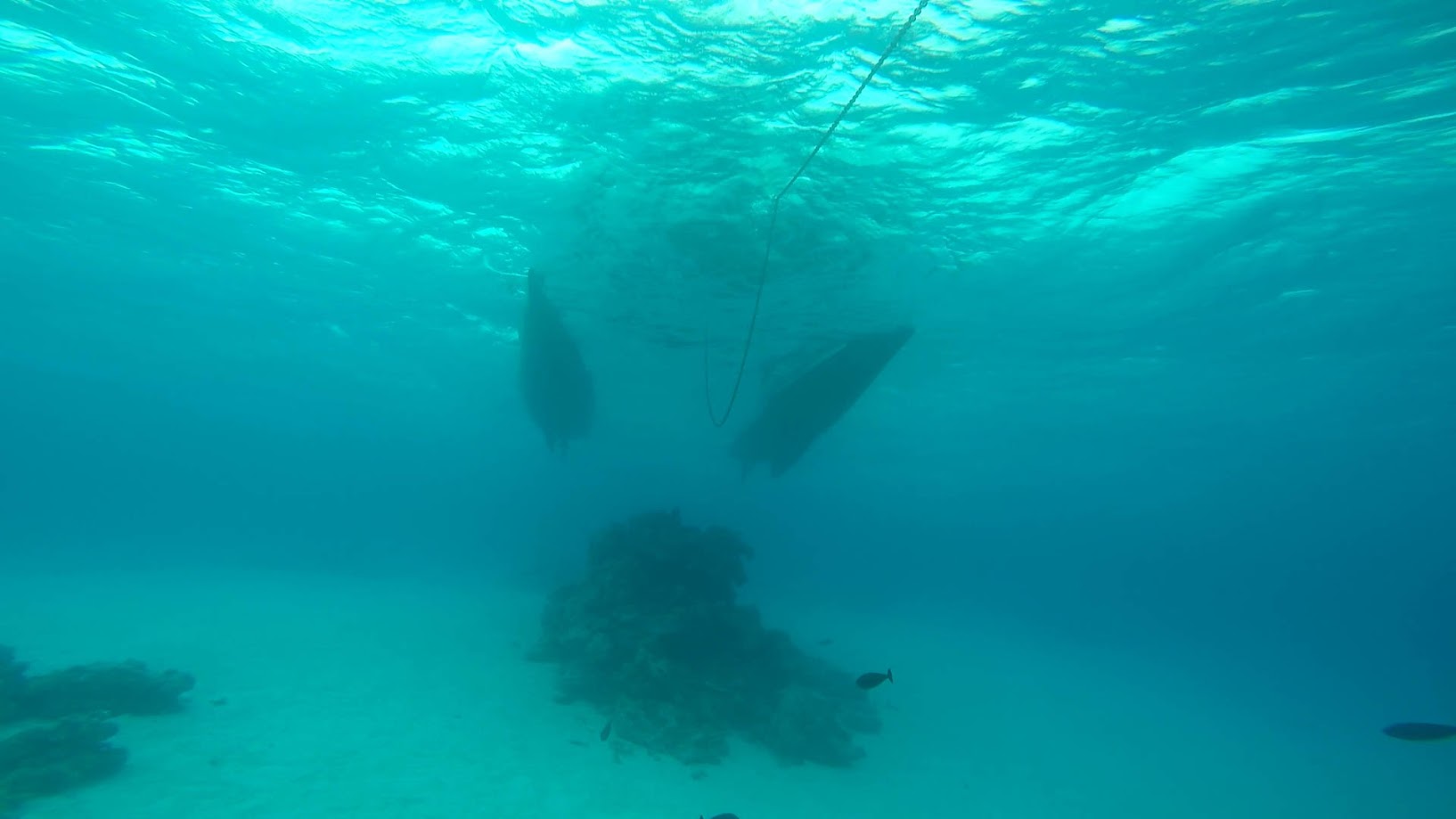 Too close to the coral head when the tide was going down and waves picking up... 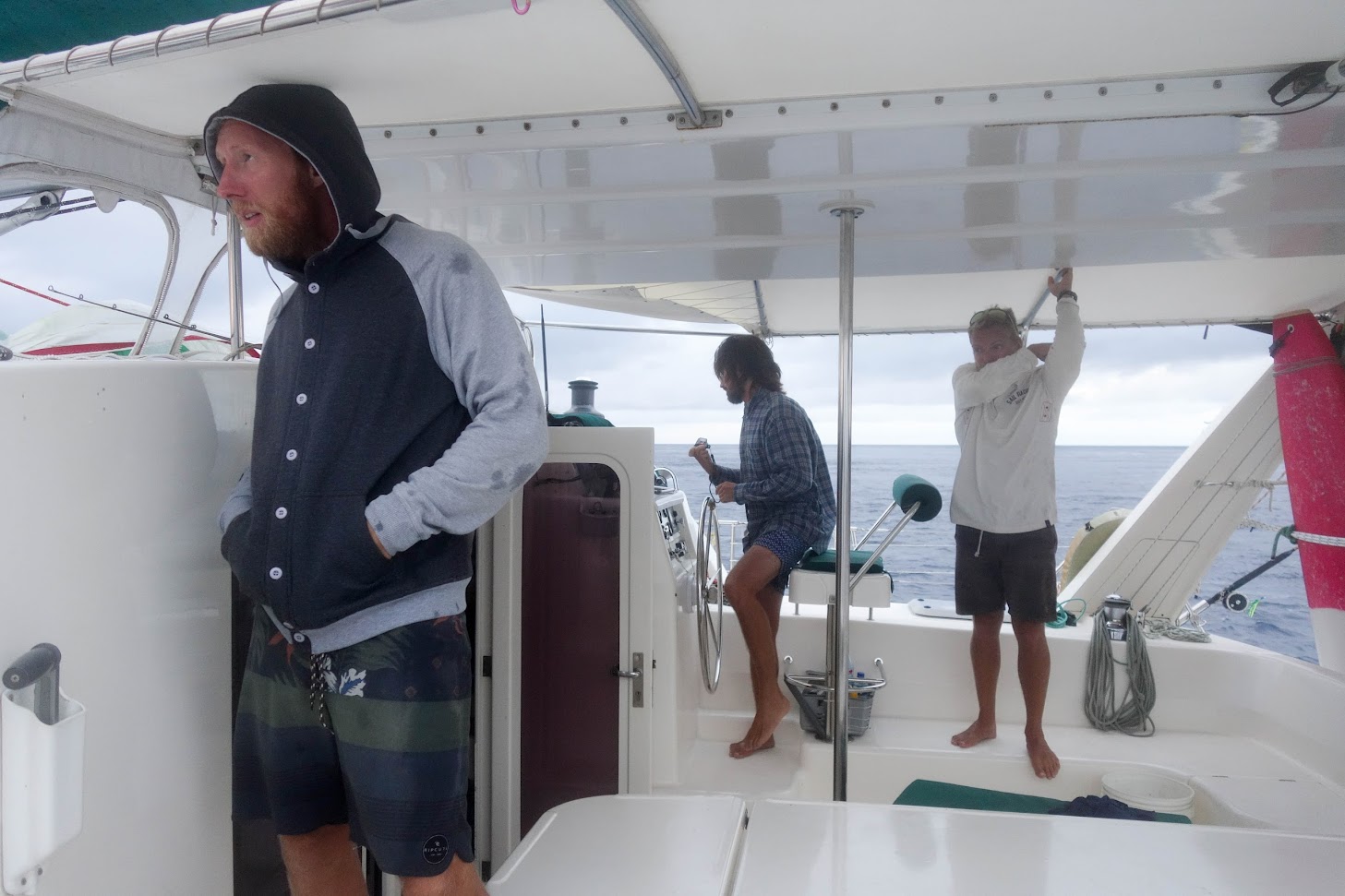 The guys are sad to leave Tahanea early.