Sailing leg Bonaire to Cartagena – Simon asked for it!

← QUICK UPDATE from Cartagena On the Hard in Cartagena →

Early in the morning of Friday the 1st of April we set sails and headed for Cartagena, Colombia, a 4 day sail to the south west. It was a nice morning and we had a hotel like breakfast (standard procedure on Kenobi) while leaving the island of Bonaire behind us in the morning sun. We planned the route to first go south for a few hours and then gybe back to a north west direction to sail on the inside of the island of Curacao, away from the bigger waves on the open ocean to get a smoother ride. We would keep the same course between Curacao and Aruba and continue north west until we got a fair bit north of Colombia, then gybe to a south west heading down towards Cartagena.

As we were about to gybe on to the north west heading south of Curacao we also set a full main sail, we did this procedure with the three fishing lines still in the water… bad idea! Two of the lines were tangled up in both propeller shafts and Lukas had to snorkel down under the boat in the middle of the sea to cut the lines free, good job (he wore a safety harness). Good thing that we were close to Curacao and we decided to do an “emergency stop” in a well protected bay called Fuik Baai at the south tip of the island. As we were approaching the bay a black rib boat from the coast guard appeared behind us out of nowhere, they eventually boarded Kenobi and did a quick search through. They were really nice and since we only did an emergency stop they let us carry on with our business. Anchored up, we went into the water to cut loose the lines from the shafts properly, it was a fair bit of work under water to get all line out from the shaft bearings. Amazingly the line tangled up in the port shaft still had the lure attached even though the engine had been running for more than an hour. 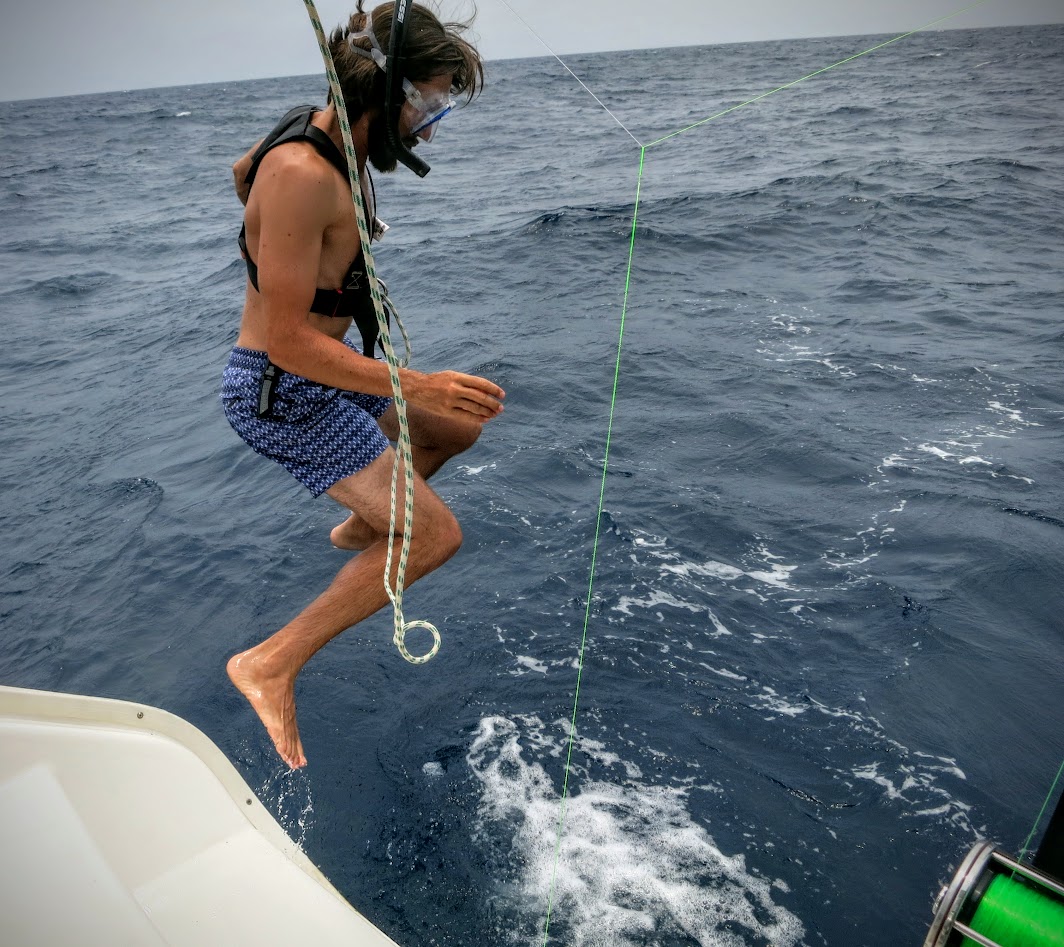 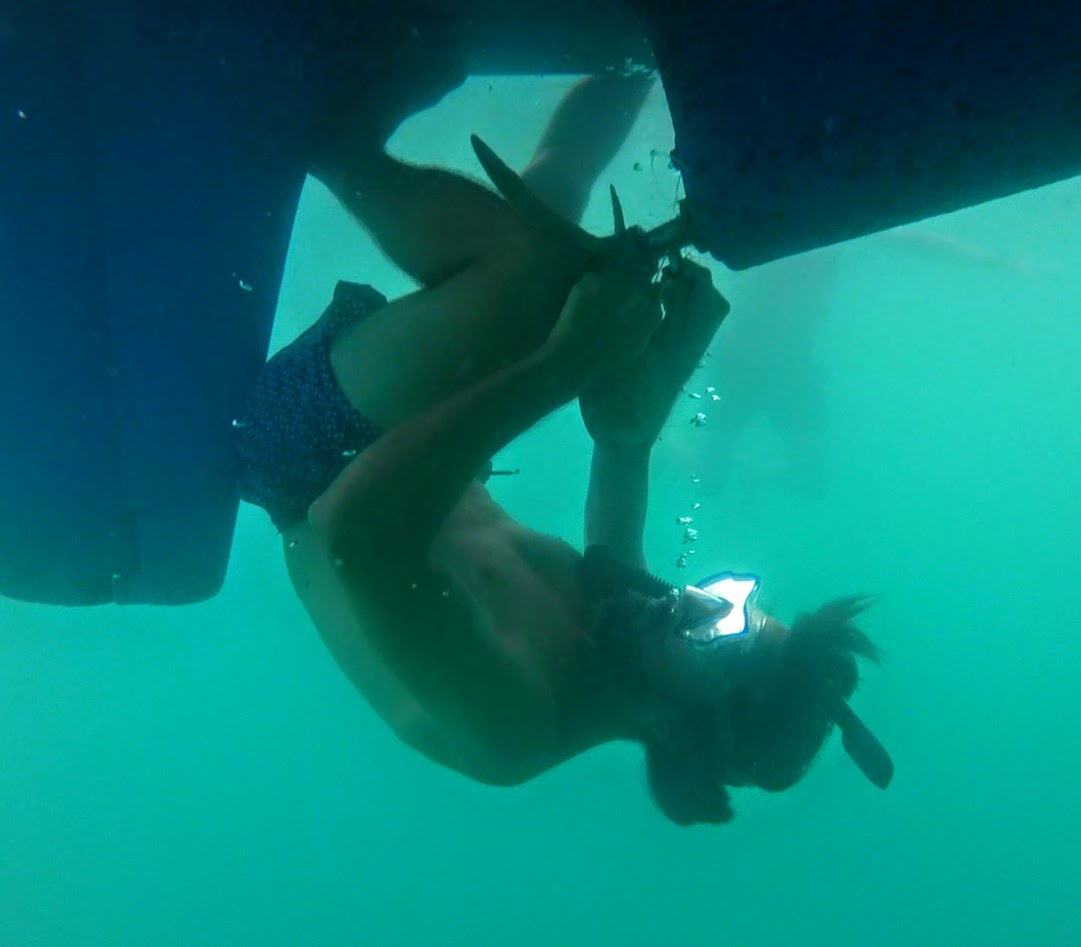 Just another day at work

All good, we went back to sea an hour or two later. As we set the main sail we realized that the line for the first reef was damaged, almost cut in half close to the block at the leech of the sail. Frustrated we went back into the bay again. It is a good thing to have a lot of spare parts onboard, we changed the line and went out once again. No problem this time. It felt good to have fixed all the issues ourselves and as we sailed up the coast of Curacao in the sunset. Curacao seemed like quite a busy island compared to Bonaire and it was cool to see all the lights from the houses and industries along the coast. There were also a lot of traffic on the water, big ships entering and leaving the island. We had to keep an eye at the AIS receiver (computerized shipping signal system that we got onboard) and a good look out from the helm. We had a close encounter and went just behind a big tanker on its way in to the city of Willemstad. 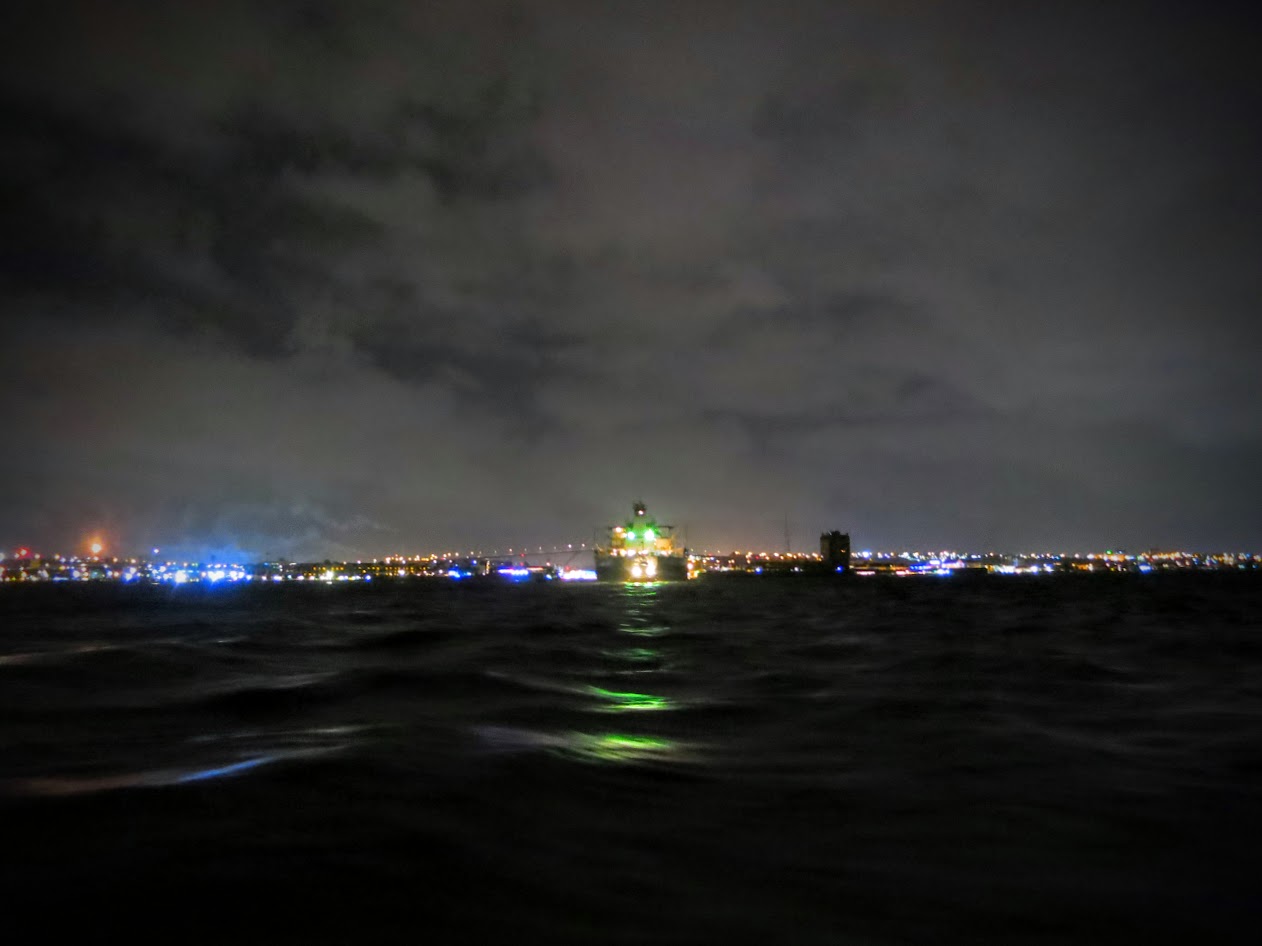 The big ship that we just avoided

In addition to the minor incidents with the boat this leg also offered some interesting sailing challenges. We had quite big waves all the way until we got into the “shadow” of the north coast of Colombia. It was hard to sleep at night, especially for the guys in the front cabins because of all the banging from the waves hitting the boat from underneath. Apparently this area is known for its big waves we learnt later on from a fellow sailor in Panama :) During our leg between St Vincent and Bonaire we had a full moon which made the night skies very bright. This leg it was the opposite, complete darkness surrounding the boat for basically 11 hours a day. The first hour of the first night shift was pretty scary, you did not see the waves hitting the boat and you had to stare at the compass and the wind instrument continuously to keep the boat on the right course. Eventually you got into it and you learnt how to feel and listen to the waves and the wind, you got to be one with the boat! As we went down along the west coast of Colombia the wind shifted to come more from the north. Because of this we had to do another gybe to avoid an area with shallow water (from 1000m to 30m depth) north of Cartagena witch is known to create big waves, we did not want to hit that area in the middle of the night in complete darkness. 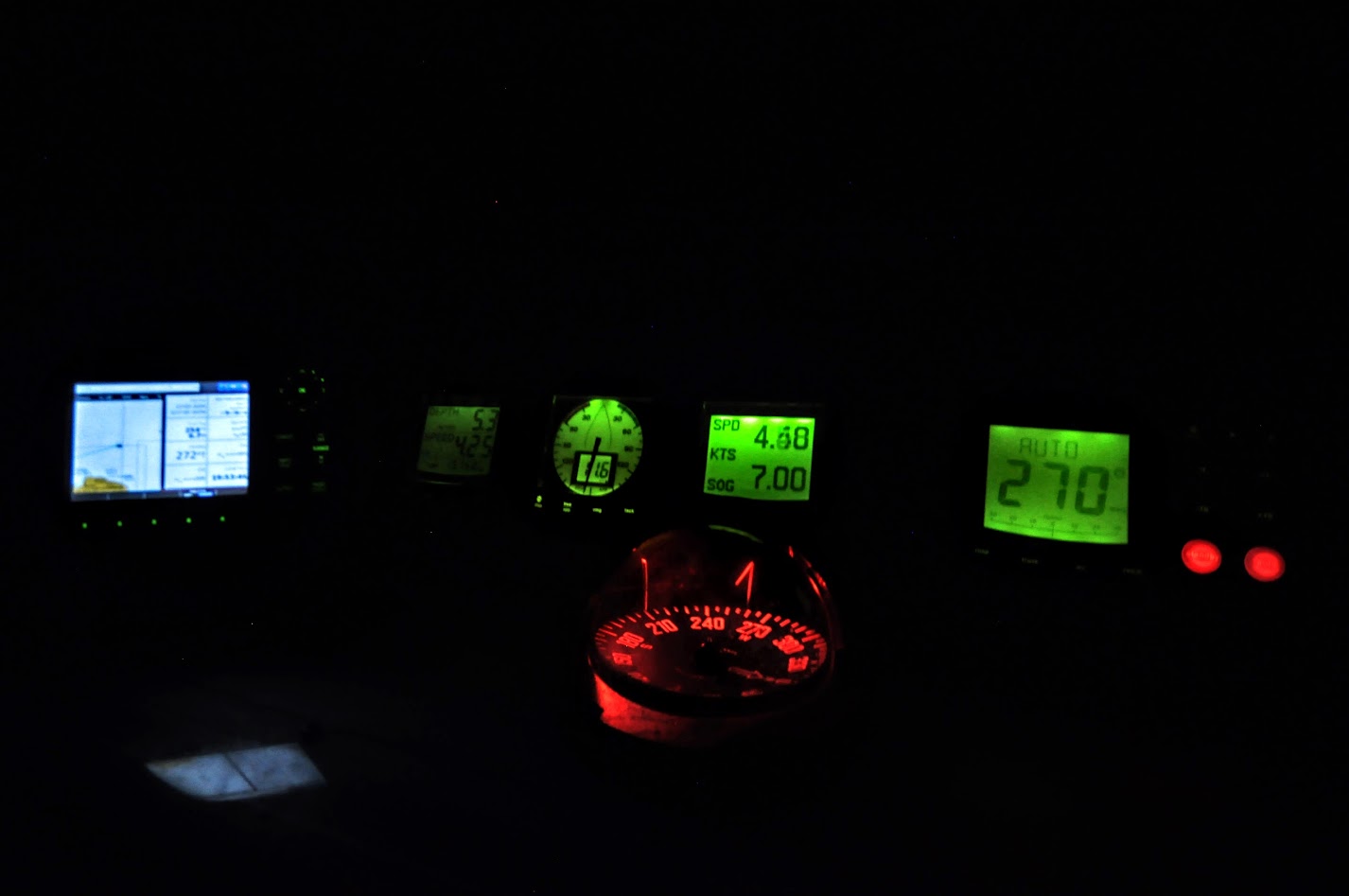 Instruments during the night

When you are doing multiple day legs you have to consider and plan for the timing of your arrival on the destination. The last night of this 4 day leg we had to reduce sails, 2nd reef on the main and furled genoa, to keep down the speed of the boat and make sure we did not arrive at Cartagena before sunrise. The timing was perfect and as the sun rose the skyline of this city appeared. This was a really cool entry. You enter with the Miami Beach like Boca Grande (a fancy peninsula with lots of tall buildings) on your port side and the docklands with many container cranes and cargo ships on your starboard side. You anchor up in the middle of the city on shallow waters and there is a marina called Club Nautico where you can use dinghy dock and facilities for you comfort. We stayed at anchorage outside the marina. We paid about $30 (1 week) for using their facilities. In the marina we saw a Swedish boat called SY Salsa that we met in Martinique in February. They are on their way “around the world in 1000 days”. We still had A LOT of fresh tuna that we caught on this leg (read more about the fishing below in Lukas Fishing Report!), as we could not manage to eat it all by ourselves we gave a couple of kilos to the crew on Salsa. It is good to work on your karma within the cruising community, you never know when you will need help yourself :p We stayed only one night in the anchorage before heading to the ship yard for our big haul out. Read more about the haul out and our time in Cartagena in a separate post on the blog. 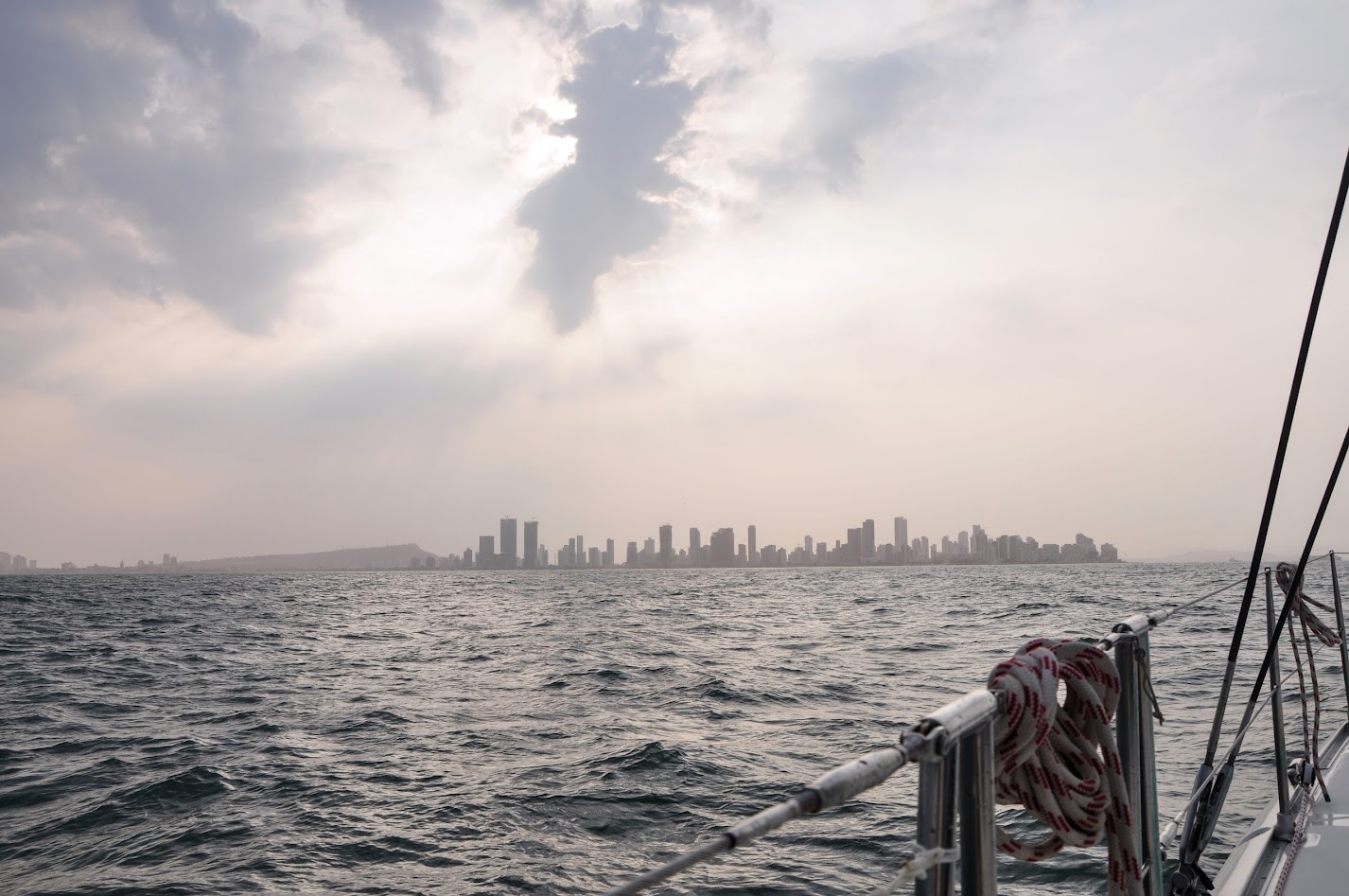 There was lots of fishing action on this leg and many times we were fooled by the fish. We were as usual trolling our three-rod spread and the second day we got a double bite. I grabbed one rod and the line just went flying off as we were luffed up to the wind to reduce speed. I tightened the reel drag and the fish broke free. Simon had better luck and landed a nice 3kg yellowfin tuna. Got turned into some sashimi and our new favourite dish - Tuna à la Kenobi, which is steaks rolled in sesame seeds, chiliflakes, salt and pepper then a minute on each side in a burning hot pan. Raw inside, cut slices and dip in soy sauce. Best dish ever!

Later the same day we got a bite from a smaller swordfish but it managed to winch out the double hook and get away. Never happened before but will secure these hooks better in the future.

The next day a bigger swordfish manages to steal BOTH the lures from our rods. Incredibly annoying and of course not a good feeling that it will be swimming with a lure in the mouth. The lines must have gotten damaged from when they were tangled in the propeller shaft.

After thoroughly inspecting the lines we were fishing again. This time a maybe 20kg tuna came up to the small rod we have in the middle, only 10-15m behind the boat and made several strikes without getting hooked. It was incredible anyway just to be able to see it all happen.

The next day, April 4, we finally got something really big on the hook. Both rods got hit, mine was pulling out hard, I adjusted drag and broke the line again!! I couldn’t believe it, never had this much break offs ever before. Must get new stronger lines and just go through all of the equipment with a microscope… Simons fish was still on though. He had been talking about how he would really love to fight a really big, strong fish and he got what he asked for. A big tuna had taken the lure and in typical tuna fashion dove a couple hundred meters straight down. Gimball belt on and the fight was underway. Simon managed to get it close to the boat many times and after 40 minutes it started looking tired. But it always just got more energy and went off again, taking another 50 meters or so from the reel. After more than an hour we were able to gaff if and bring it the 25kg yellowfin tuna aboard! The aft deck was once again a fish cutting factory as we cut out huge fillets. The best part is the stomach meat that is incredibly fatty and tender, falls apart when cooked. We made tons of fillets and put in airtight boxes at the bottom of the fridge. I also pickled a lot of it by boiling in sea water then putting in airtight box and cover with vinegar, salt and spices. Then top up with 5cm oil to make an airtight cover and put a lid on. Keeps for weeks in the fridge. Also salted some of it in salt brine, will see how that turns out. /Lukas 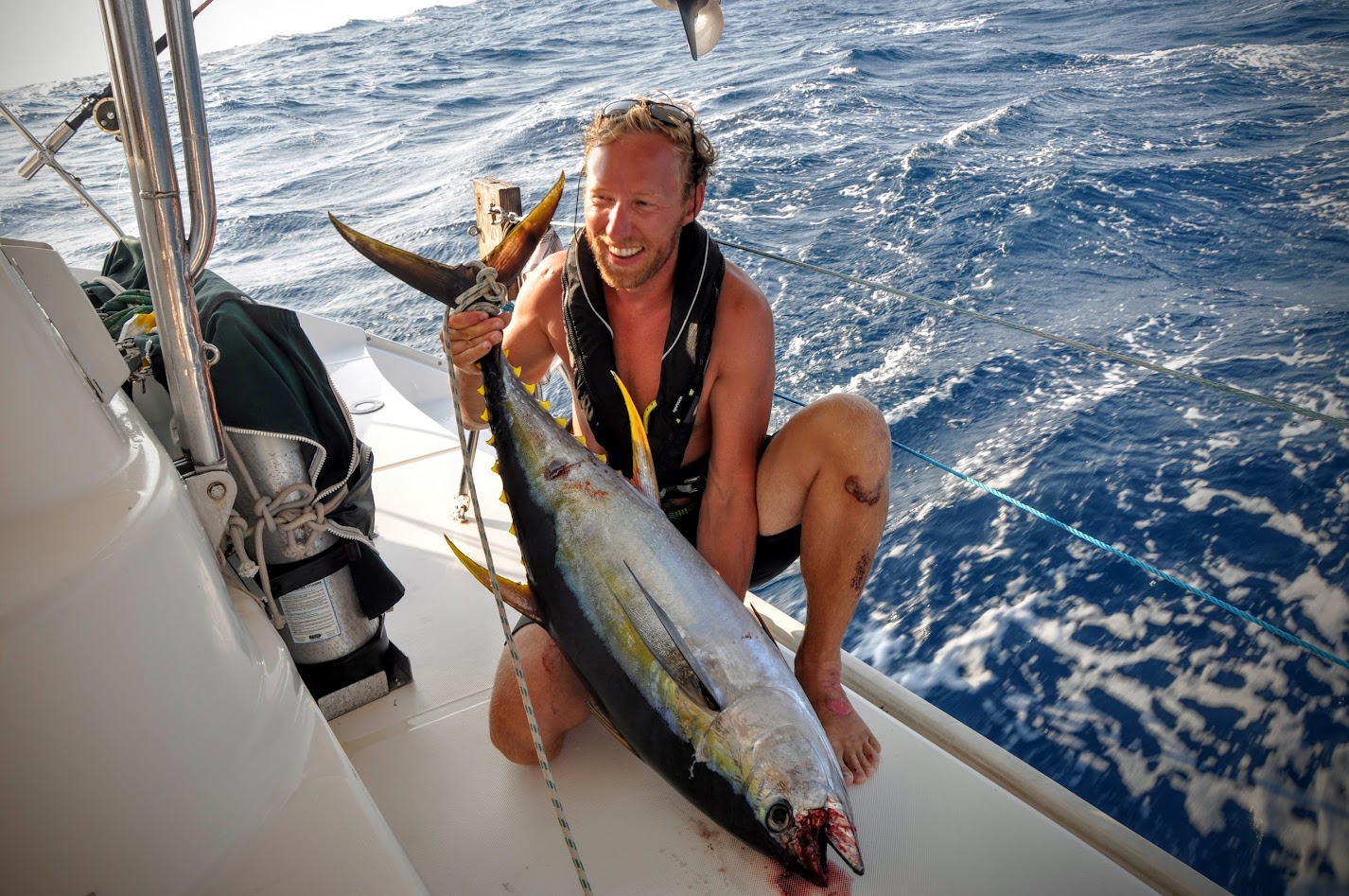 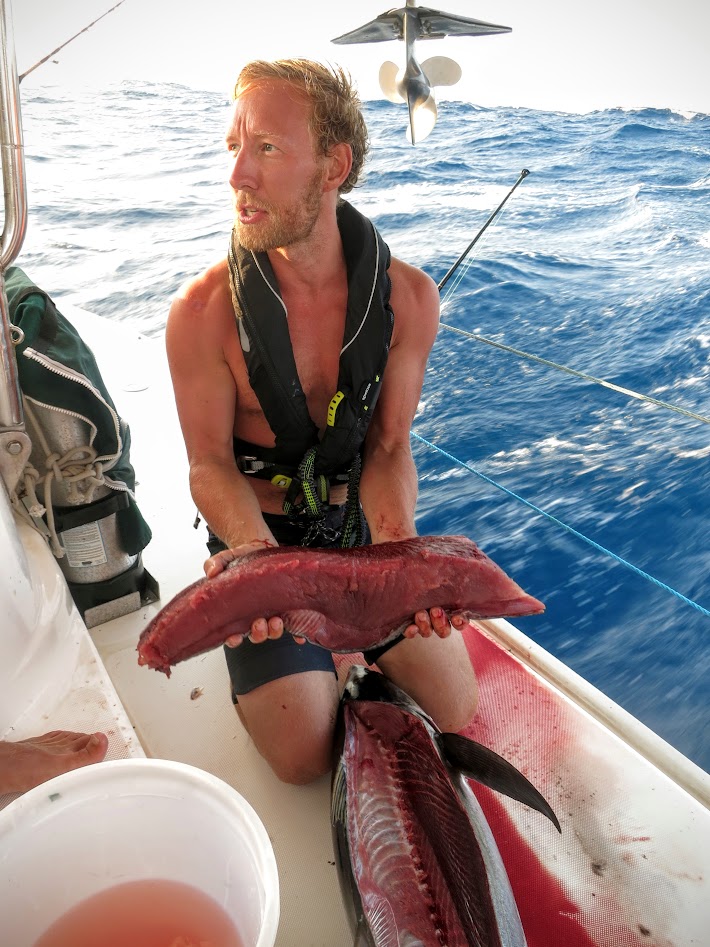 You guys, it's sooooooo heavy!

Thanks for following us! See you guys soon.

/Hampus, and the rest of the Crew