← Passage Niue to Fiji – no stopping in Tonga this time Fulaga & Matuku - the Lau Group, Fiji →

It didn’t take long to realize we had arrived in another part of the pacific now. Fiji was really different from all the Polynesian islands visited so far, not at all the same western influence on society and the buildings, the roads and the buses were more rough, and with a big Indian community the nice smell of spicy curry spread out over the town.

We arrived in the town of Savusavu, on the island Vanua Levu, early in the morning of the 1st of November, a Tuesday. Picked up a mooring buoy at the Copra Shed marina at about 7 in the morning and waited for the customs and quarantine officials to come to our boat to check us in. Here you have to check in as soon as you arrive and cannot leave the boat before this is taken care of, in other places this process is not as strict. Fortunately, this all went very smooth and by 9 a clock we were done and could go ashore. Besides checking in to the country you need to get a cruising permit to move between the many islands of Fiji, this would take another 2-3 days to get hold of. Even though we were not too interested in visiting this island, we now had a couple of days to explore and getting ready for the sailing down to the Lau group in the south east part of Fiji.

Map over Fiji and the places we visited here. 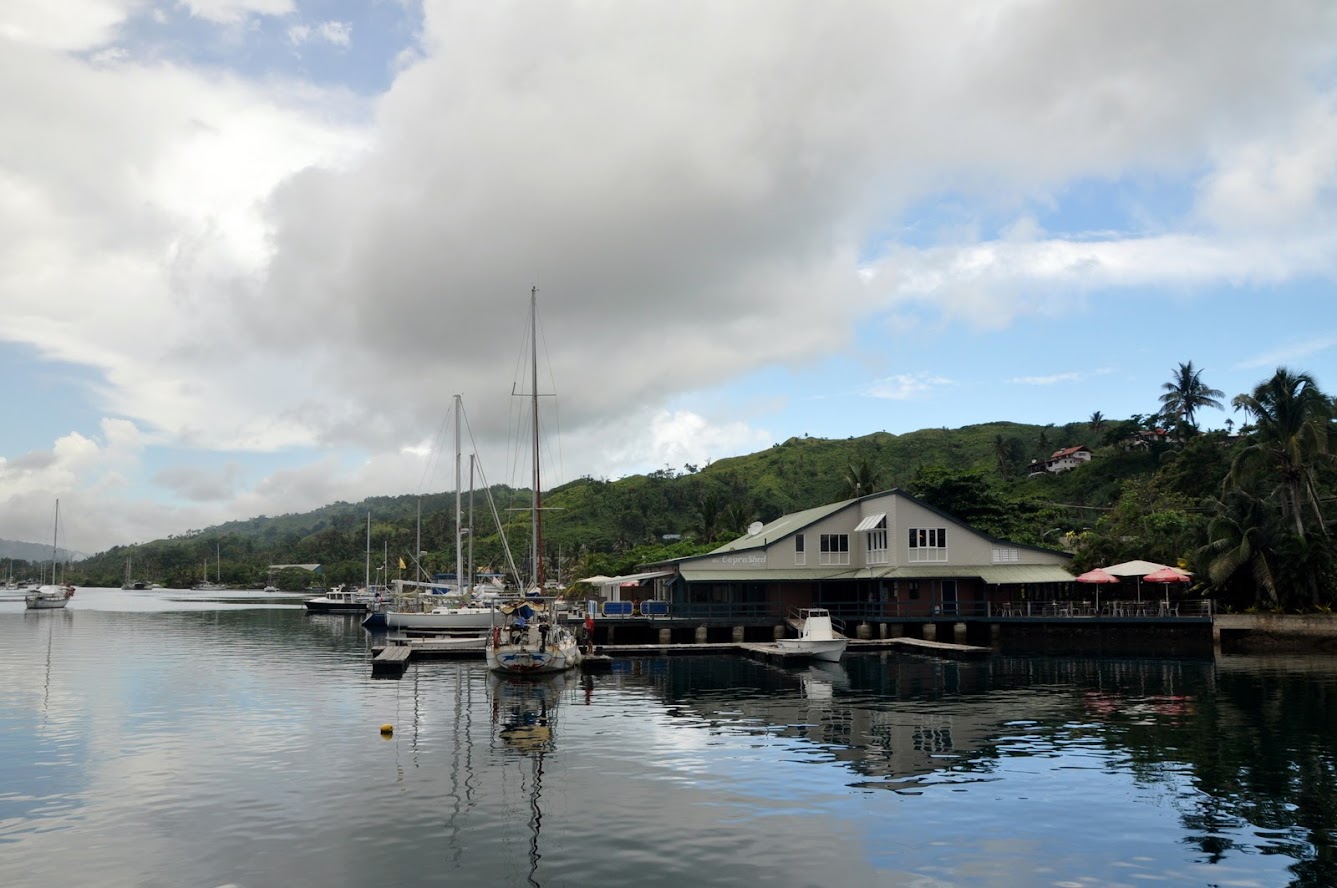 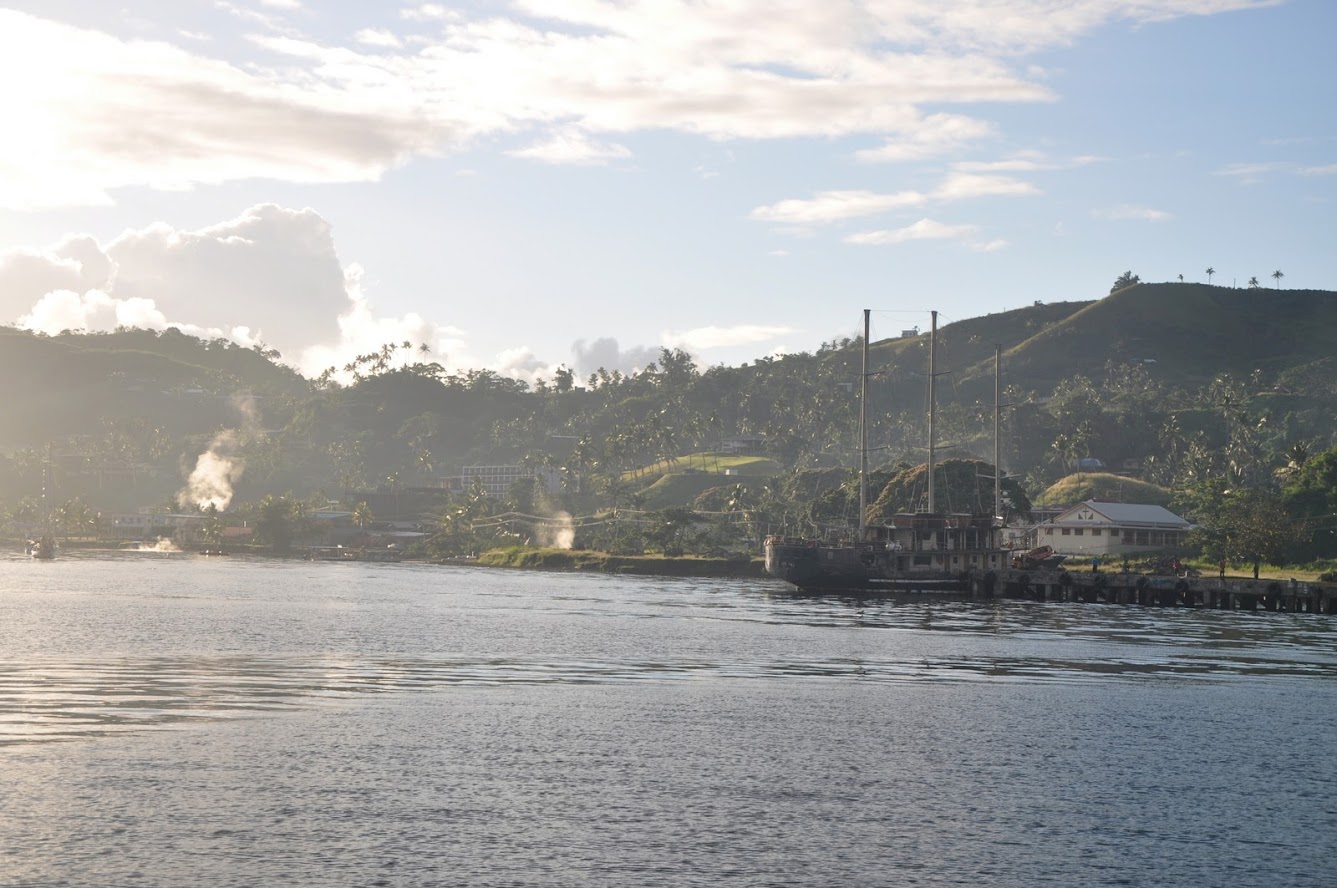 Fiji is a big country in pacific standards, and the biggest country we visited since Panama. It is made up of 332 islands and islets spread over a vast area. The two biggest islands (Viti Levu and Vanua Levu), the main part of the population and all of the tourist industry are in the west part of the country. In the east there is a chain of about 80 island that form the Lau group. The western islands are mainly high volcanic islands with fringering coral reefs, in the east there is a mix of raised limestone-, volcanic- and atoll islands. Fiji has a lot of different cruising to offer, not surprising that many cruisers spend months and even years here!

Fiji has an interesting modern history with influences from Great Britain as a colonial power, and the following massive inflow of Indian workers for the big sugar cane plantation industry, causing tensions still today. About 900 000 people are living here, about 45% of them are of Indian heritage. The Indian community are found mainly on the two major islands while the outer islands still are maintained in a traditional way by native Fijians, of course you will also find a mix of the two main groups in many places. There is a history of conflicts over governmental power in recent times. The Fijian government has been controlled by native Fijians until the elections of 1987 when a coalition of parties composed of mainly Indian voters came into power. Two military coups occurred putting the native Fijians back in control. In 2000 the same thing happened all over again and the indigenous Fijians have been in power since. Apparently there are still some tensions between the groups and, as a consequence, in recent years a lot of Indo-Fijians have migrated from Fiji. Still, based on our limited experience the people of Fiji seem to get along well and everyone is friendly and happy. Fiji is considered by many to be the friendliest country in the world.

The town of Savusavu was very small, basically just one main street but it was very busy with a lot of stores, small shops, a few banks, a big market and many restaurants and food stands. There were no houses were people were living in town, I guess all the people stayed in the surrounding villages. We were looking forward to having some spicy Indian food here, and we were not disappointed. Most of the restaurants were small and did not look too impressive from the outside but the food was always great. On the second morning the guys on One love arrived and it turned out to be Deans birthday (congrats mate!). Of course this had to be celebrated, we had dinner out together and after we went back to their boat for drinks and homemade chocolate cake, thanks Laura for the best cake in a long while! 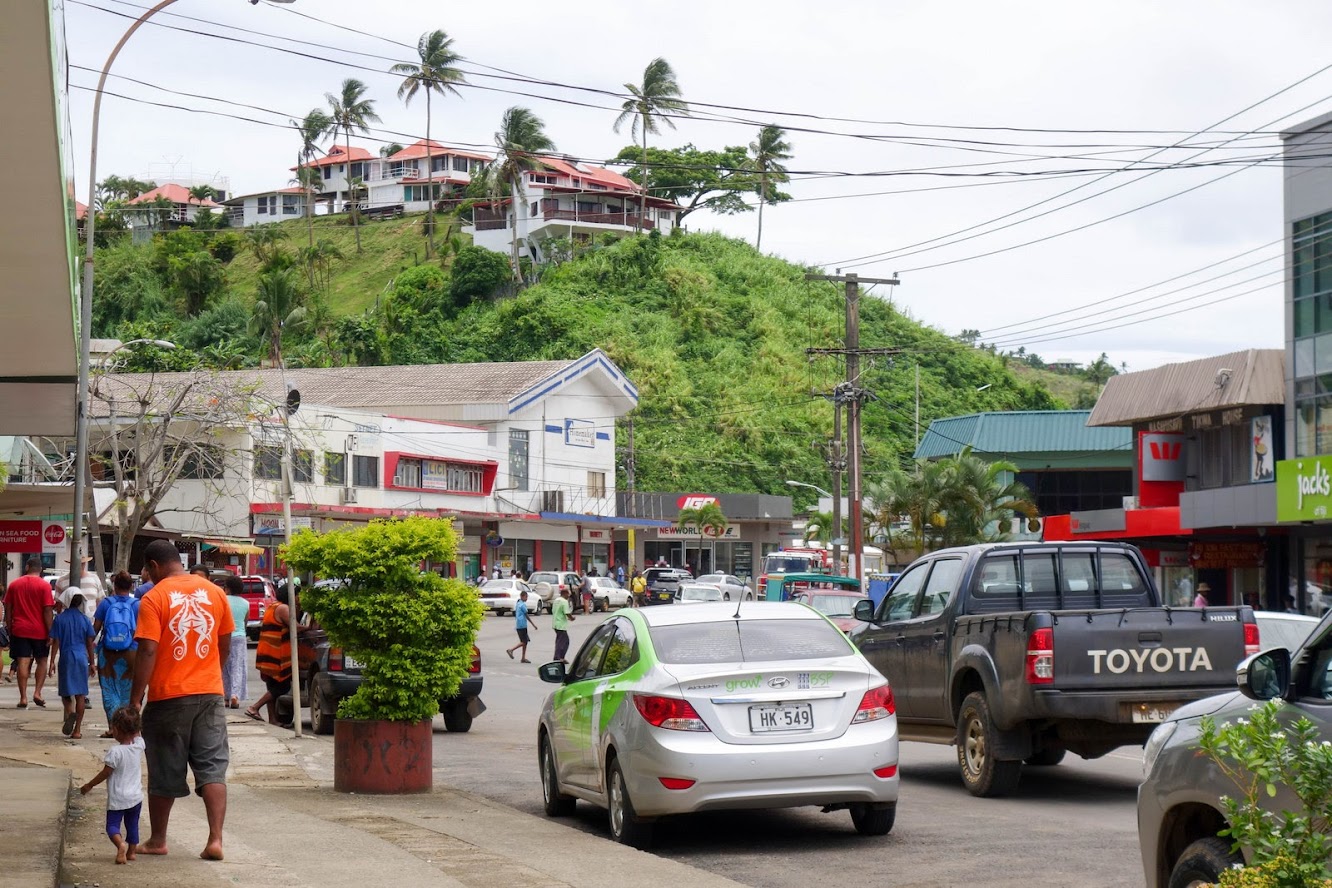 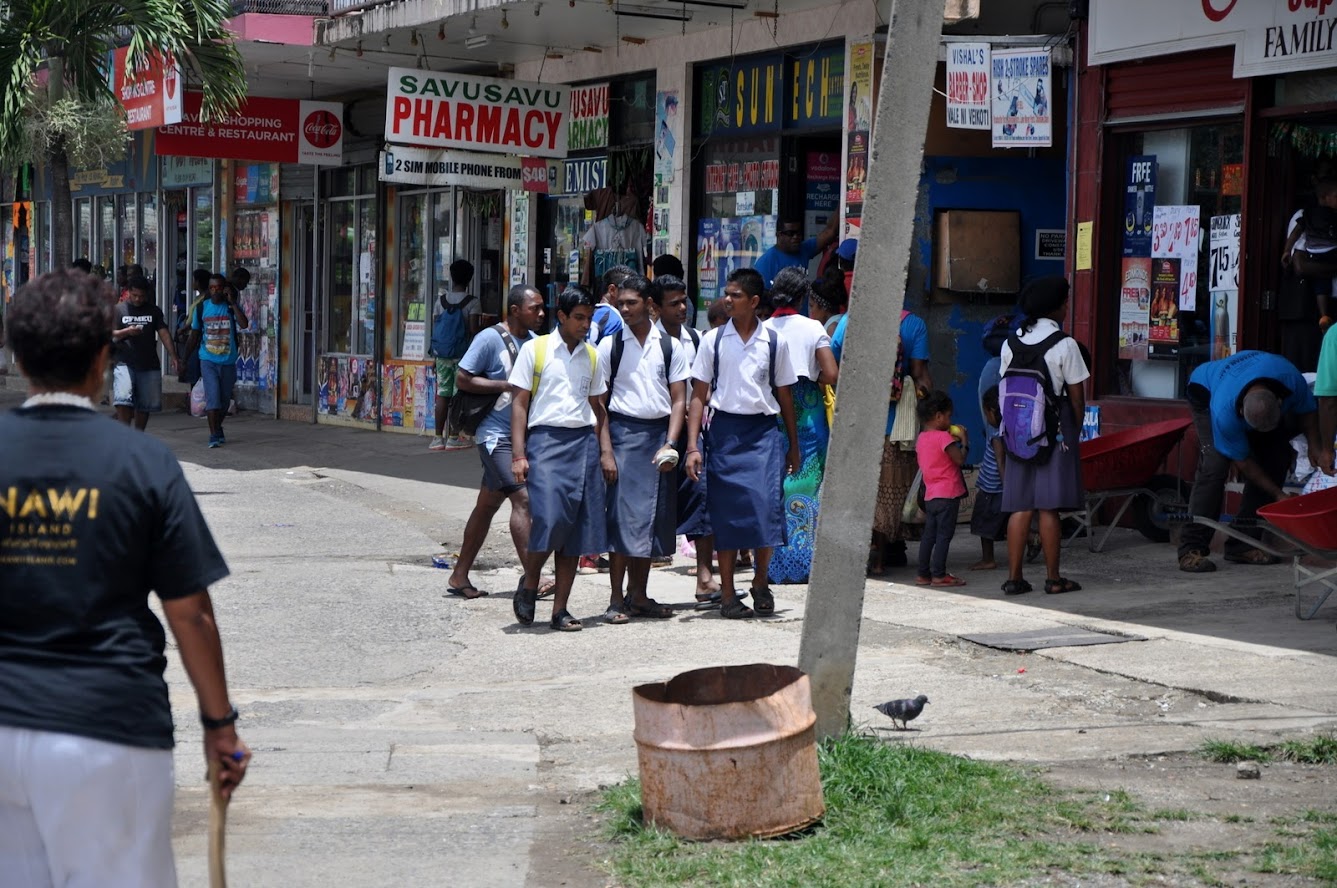 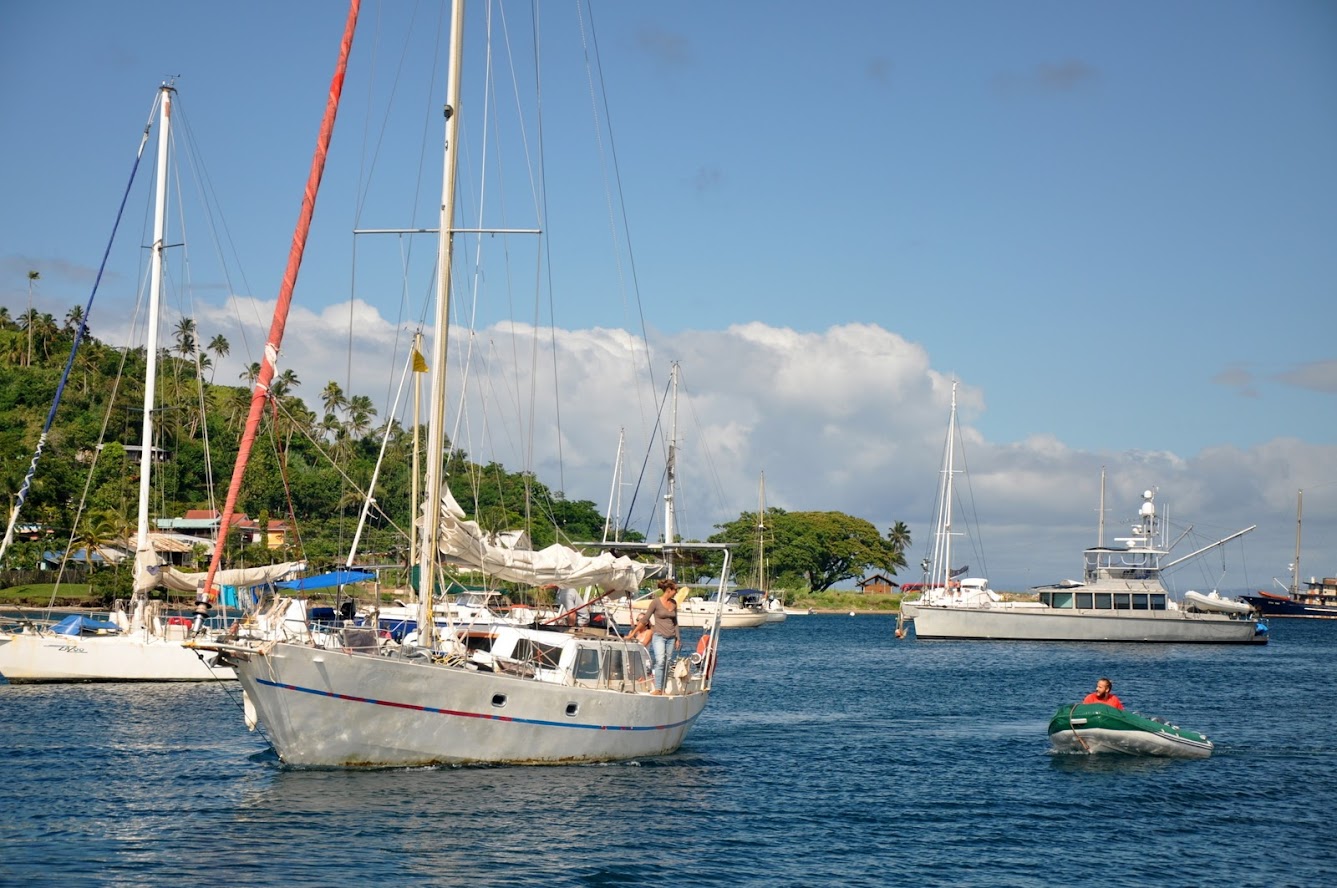 Ove Love arriving. Johan in the dinghy welcoming them.

A bit tired from the night before, Lukas and Simon, accompanied by Laura and Stephanie from One love, went on a bus trip across the island to the Indian town of Labasa on the north coast of Vanua Levu. Labasa was not much to see, to quote Lukas, “a spectacularly dull city”, but the 2,5 hour bus ride (one way) there on narrow, curvaceous roads over the mountains was more exciting. The bus itself was something else, a big screen TV in the front showing explicit dancehall and reggae music videos and the tunes roaring out from big speakers. 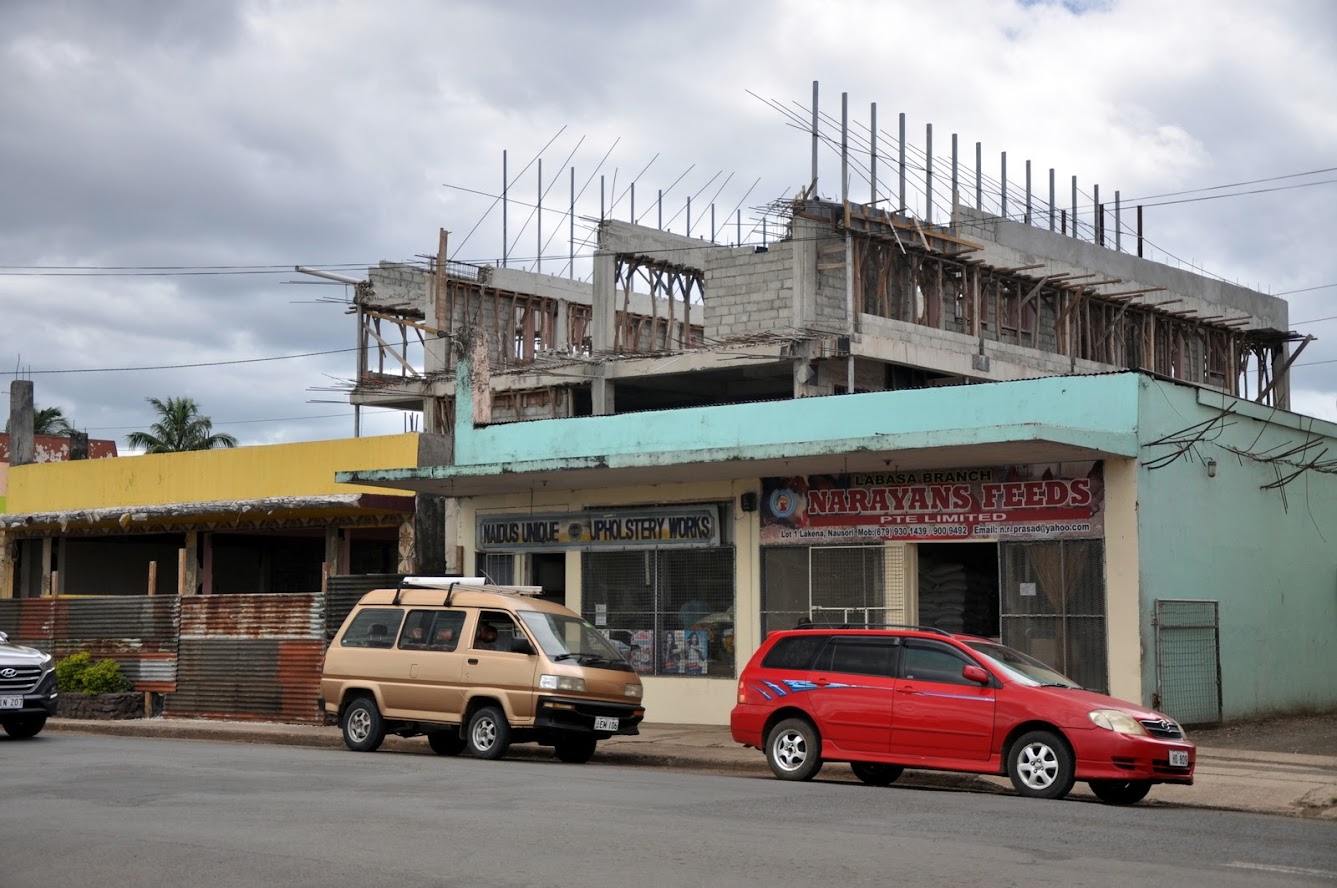 The not so nice town of Labasa. 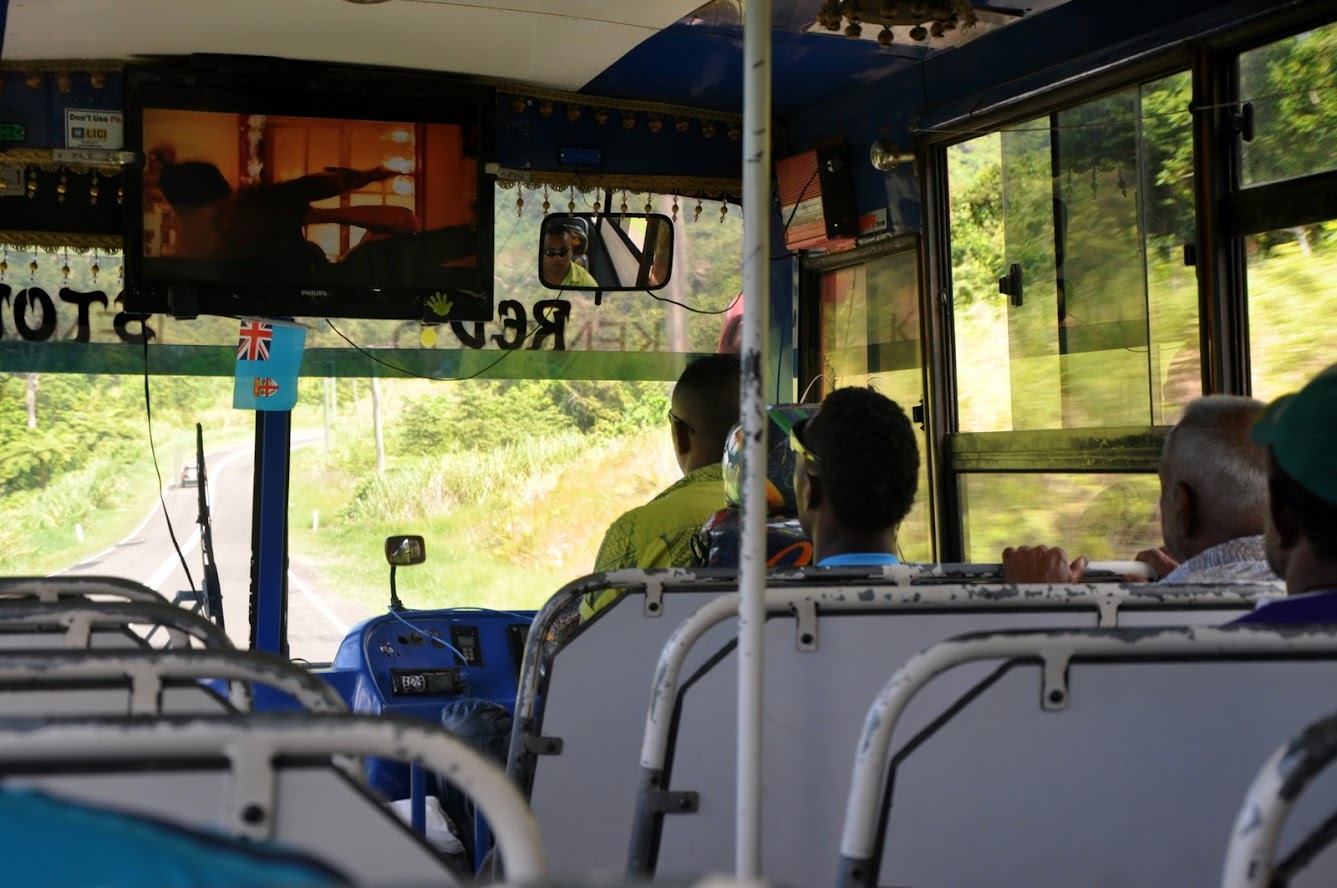 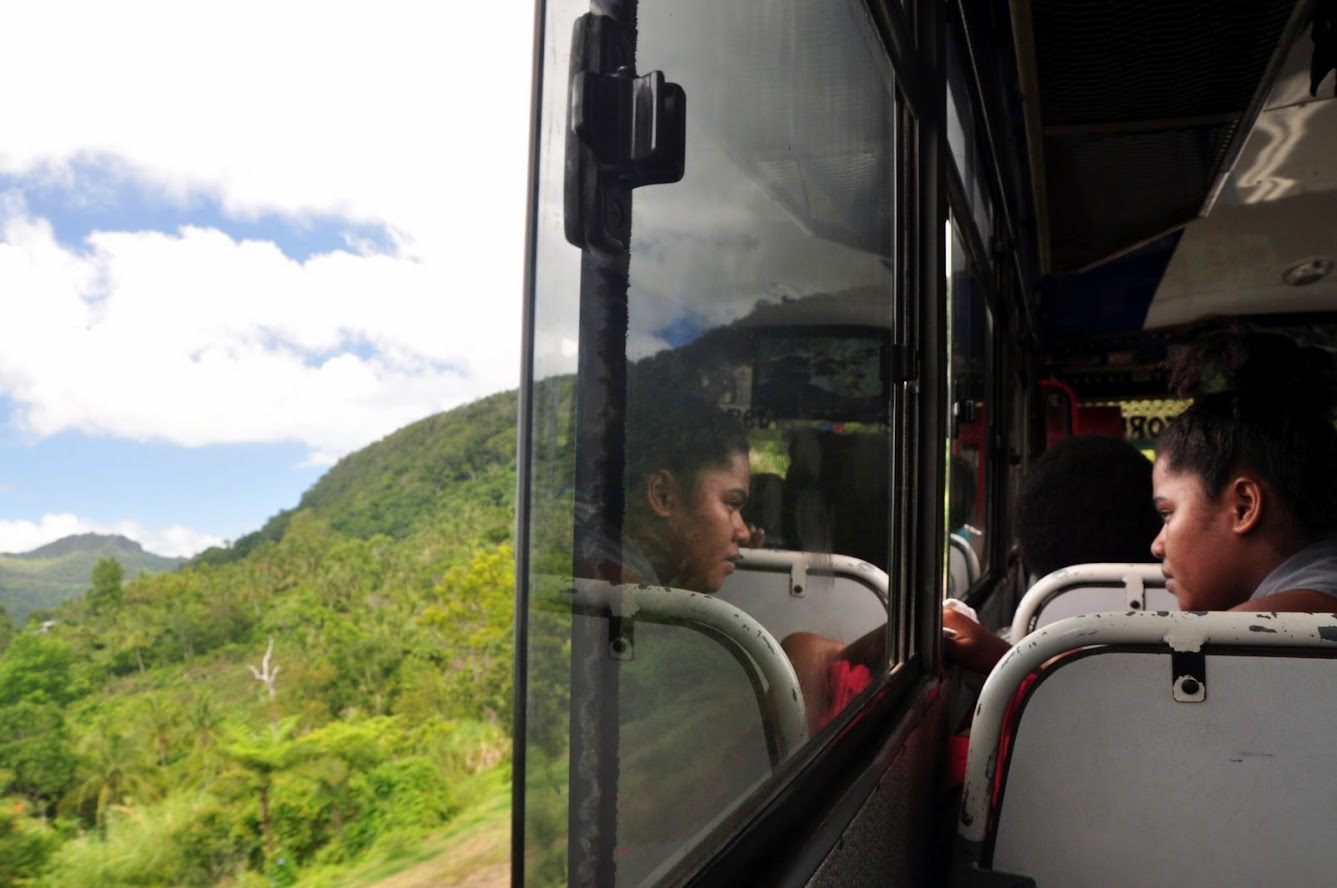 The senic disco bus ride over to Labasa

On the Thursday we got hold of our cruising permit and we could leave on Friday, before the weekend, as we were hoping for. While me and Johan were taking care of some business on the boat and preparing for the upcoming sailing leg, Lukas and Simon went diving on Friday morning. Fiji is known for having many great dive spots but this one, Namena reef, apparently got hit pretty badly by hurricane Winston raging through this part of Fiji earlier this year. According to a fellow diver on the trip, wo had been here last year also, as much as 2/3 of the coral had been destroyed. The guys at the dive shop didn´t mentioned anything about the damaged reef neither before, during or after the trip. Well, I guess you can’t blame them but Lukas and Simon came back quite disappointed. 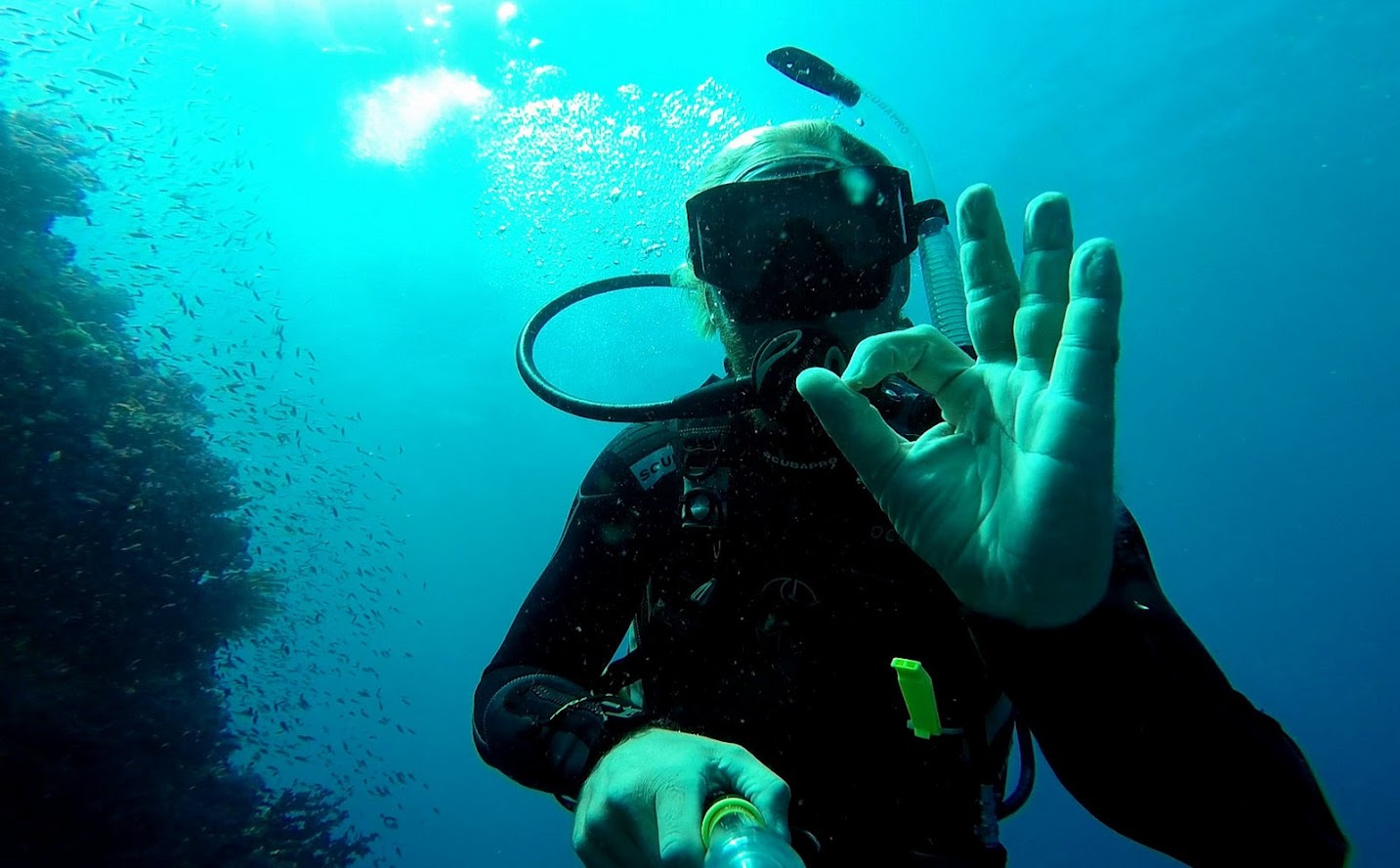 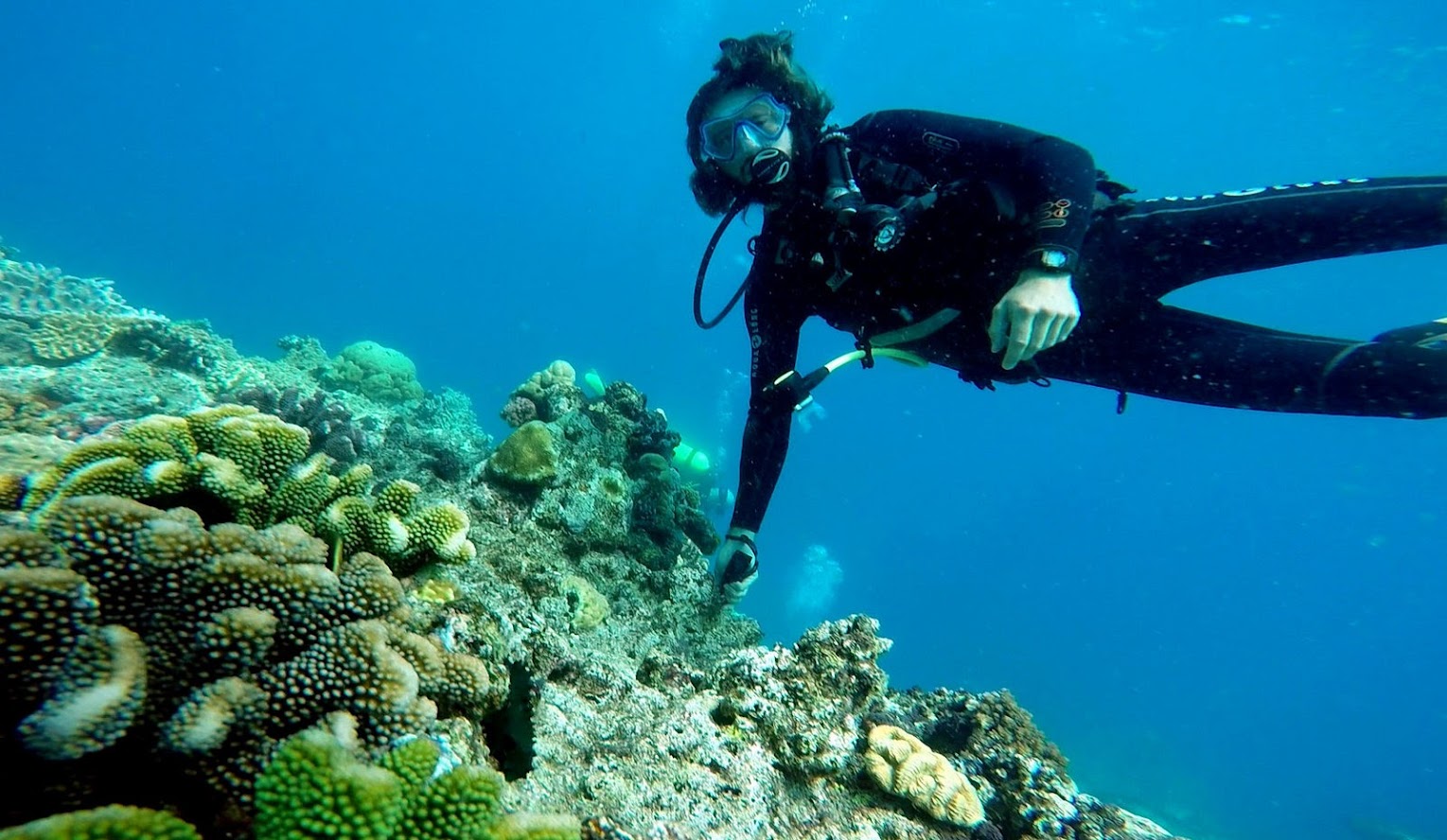 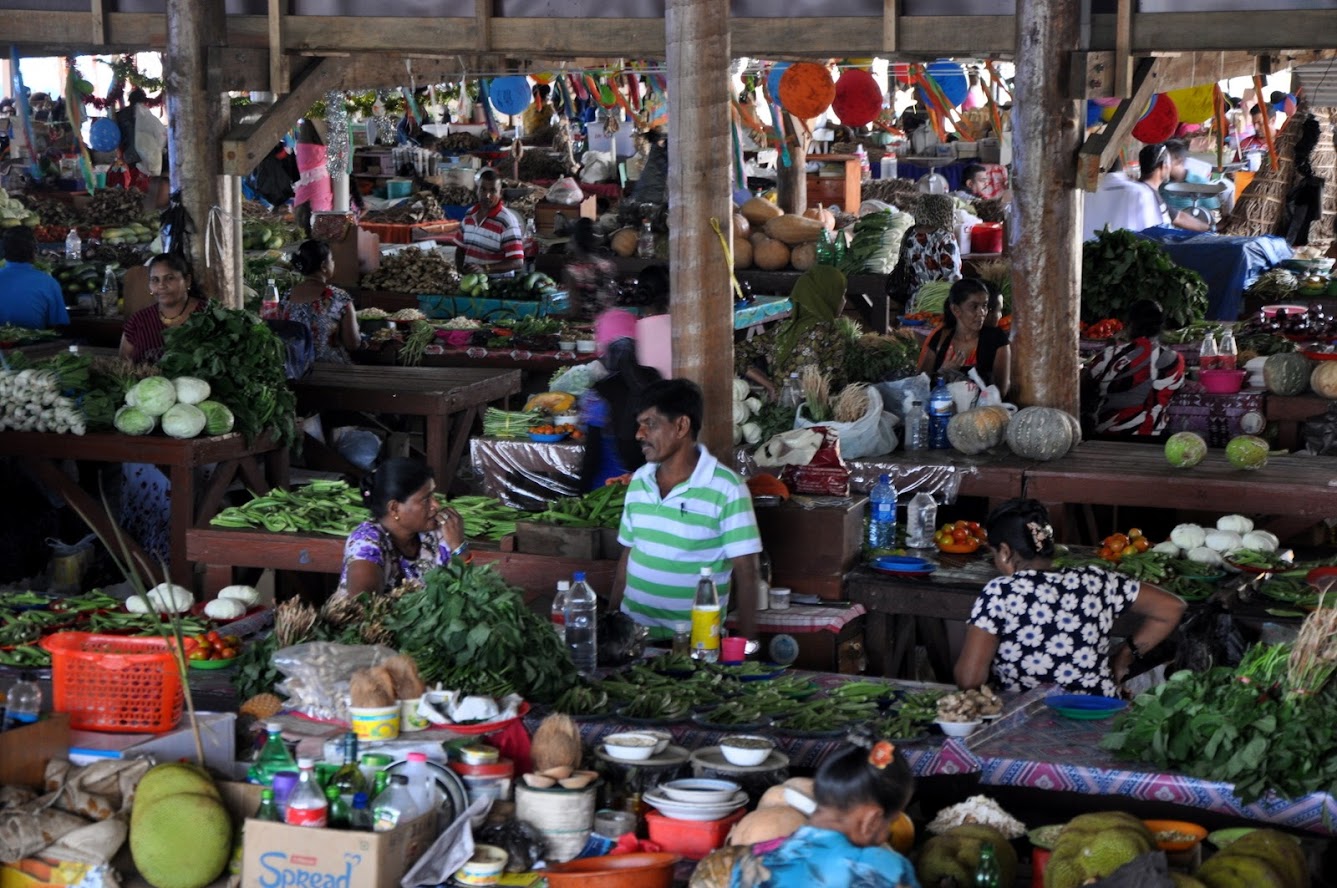 Busy market with alot of nice fresh food to stock up on.

By Friday afternoon we had our mandatory stash of kava root sorted out, and the boat fueled up and ready to sail, or motor, down towards the Lau group about 2 days to the south east from here. We hope the forecasted light winds from east, north east, holds up.