When we left Tanna on the 26th of November we were not sure where we were going. Was the weather good enough to permit the 1400M crossing all the way to Sydney? Or did we have to go into Noumea in New Caledonia to await the right weather window? We had been gambling a little by keeping cruising this late in the year. Although November is officially cyclone season it is, from what we’ve heard, usually OK so we were not too worried. Just wanted to come to safety in Australia as soon as possible. And knew for sure we couldn't afford waiting for ideal weather for too long…

Either way we had to follow the same route to round the southern tip of New Caledonia, some two days sailing away. We decided if we manage to sail there without using too much fuel and if the weather looks good then we’d go straight to Oz.

We started out in light winds and with mount Yasur still visible in the background we caught a nice 6 kg bigeye tuna. Kind of a strange catch, the fish almost didn’t fight at all and was taken aboard in record speed. This made the meat different, very firm and clear and even as i had cut out the fillets the muscle fibres were still twitching! Also storing it as usual in an airtight box in the floor of the fridge the meat did not release any liquid to be drained off. The taste was very good.

By evening we had a vicious double his by something with sharp teeth, one squid lost and the other one will never look the same again. The sun came down and the wind increased to 20 knots and, unfortunately, shifted to the south-east so we had to beat our way further south under double-reefed main and genoa. We marched on in 7 knots, slamming against the seas and did not get much sleep that night. 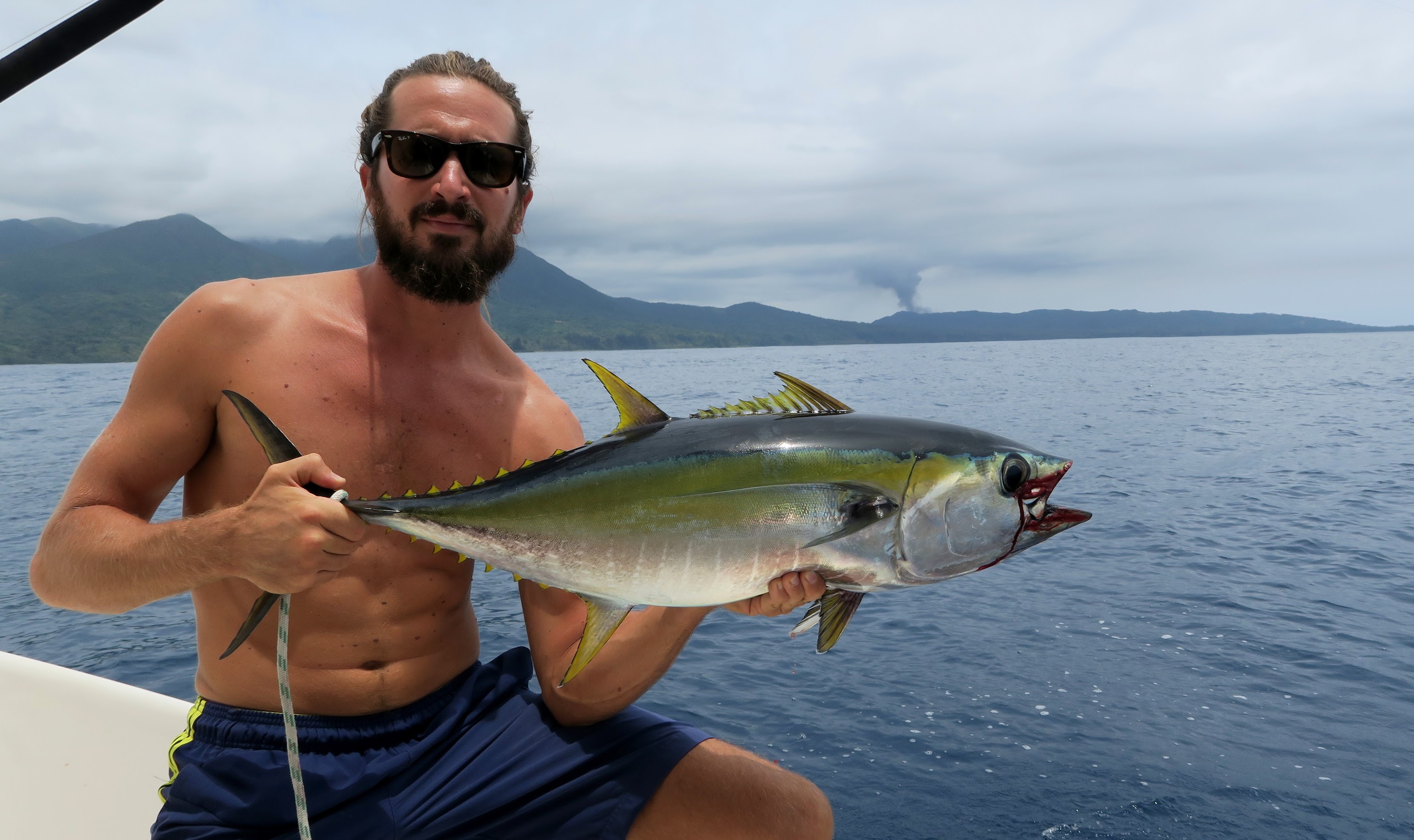 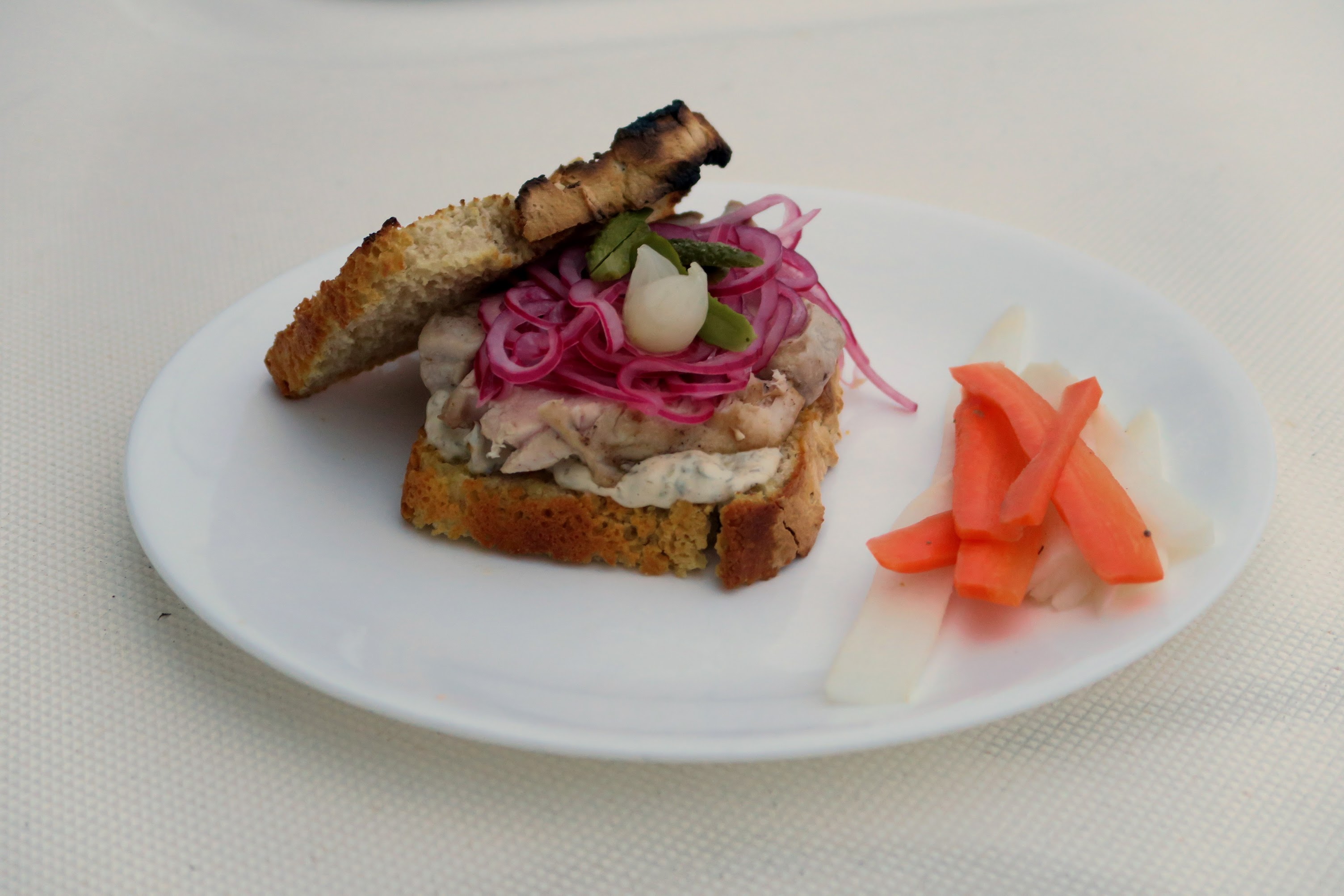 As we sail past the island Mare next day, we see a huge flock of maybe 300 birds circling above the water. The rod with the little 6/0 reel starts screaming, in the back we see a big marlin jump! The fish takes 300m in its first run and the reel is actually smoking when we manage to head into the wind and stop the boat. We start the engines and turn the boat around, start following the fish and I’m getting line back on the spool. It feels good, this is our third chance at a big marlin, let’s make it count. I’m on the aft deck and we keep following when the it suddenly heads in under the boat, line going towards port propeller. Hampus sees this and puts the engine in neutral but it’s no use, the light 0,60 line finds the propeller and is instantly cut off. I actually cry out when it snaps - HELVETE!! The whole trip, every big marlin has broken me off. How hard should it be?? Maybe I should have taken the rod to the front of the boat to fight, away from propellers… What if, what if…

At midnight we round Ile des Pines, the southernmost part of New Caledonia, and can finally head off the wind a bit. The sheets are relaxed, the sails catch the wind better, Kenobi moves faster and with less effort. On board the slamming and rodeo-bull movements of the boat decrease and we can get some sleep. At 4 AM, during my night shift, I download a fresh GRIB and get the weekly “Weathergram” email send out by NZ weather guru Bob McDavitt. Looks like the coast is clear to go to Australia! Easterlies across to Brisbane where we turn south and follow the East Australian current down to Sydney. Maybe some tricky lows popping up in a week over the Sydney area but that may change and then we are close to the shore and outside the cyclone area. Sweet!

Next couple days we have pretty good winds but they keep shifting so we have to work a lot with the sails, putting in a reef only to take it out a couple hours later. We are used to sailing for days without touching the sails so this is new! The weather is grey and the air quite chilly - not Sweden-chilly but enough to make you want to put on some socks. The coconut oil from Fiji solidifies. Outside grey, windy and chilly I spend much time lying in bed, writing blog and organising pictures. Gets boring and a bit claustrophobic, looking forward to stepping on land and go running!

Five days into the crossing we start getting more sunny weather and sometimes weak winds so we had to run one engine up to keep the speed up. Don’t want to drift around out here and wait for winds, no knowing what kind of weather will show up. Sunny easy conditions makes everyone more happy and energetic. We work out in the trampolines, cook more food (Oz biosecurity will take all fresh produce so we focus on eating it all!), hang out more together. One day we have a favourable 2 knot current, the next day we have 2 knots against us.

One week into the crossing we get a strong strike on one of the rods and I can’t believe it, it’s another huge marlin! This time on the right rod, the one that has the lager 9/0 reel filled with good, long line. We stopped the boat fast and with four hundred meters line in the water the fight could start. Hampus manoeuvred under motor as we had to follow the fish to regain some line. It jumped a lot in the beginning, as all billfish do, but then it dove deep, like a tuna, and would not give an inch. It was hard work trying to pump and reel this fish towards the surface and time and time again it would decide to do another slow but determined run, taking all the line back. After five minutes my hands and arms were starting to hurt. The sun was on its way down when it struck and as I fought the fish the sun went under the horizon, then just a pale silver shine as the stars came out to the east. Going into the night and with a severe lactic-acid buildup in the arms, I started thinking of Santiago in The Old Man And the Sea. If he could endure, so could I! After two hours fighting this magnificent fish I was also feeling the same feelings as he had, I was starting to feel the fish was my equal; stronger but not as cunning. I did not want to hurt him, at the same time some part of me wanted to gaff him, pull him up and witness the magnificent catch. My crew helped me decide, everyone felt it was too big for us to eat and that blue marlins should be released. So this is what we decided. It was not easy though, the fish kept doing circles around the boat and we had to run around the decks. It was pitch black with huge swells, sometimes flooding the entire aft deck. The fish was not far from the boat now and when we shone a torch we could see the huge blue, shining fish in the waves. When it started looking a bit tired and coming closer I moved to the aft deck where we were going to try and get hold of it. The game plan was to let Hampus grab hold of the bill (he volunteered!) and I’d try to wedge out the hook with our de-hooker tool. In the rough seas and at night this would be very difficult and potentially dangerous, I was not sure at all about this. So it was actually a relief when the fish finally took care of it himself, a last run in under the port hull and he cut the line against the propeller. I was so tired afterwards! It took two days until I had my strength back. This is something I will never forget, feeling the strength of the fish, the connection to the fish, the crew all working as one and fighting into the night.

OBS - pics of this will come soon

The next day poor Simon who had had a soar throat before was full-blown sick. We started on a three-man schedule as we approached the Australian mainland and turned south towards Sydney. We found the Australian East Coast Current exactly where it was supposed to be, following the 200 m depth curve some 15-20 miles outside the coast. The strange thing was that at this distance we couldn’t see land so we sailed for days so close but without seeing our final destination Australia! Flies, butterflies, more birds and different types of clouds reminded us that we were close. Also containerships and on a calm sunny day even a smaller sport fishing boat passed before us. A couple nights we had massive thunderstorms over us and because of our track record with lightnings (see this post) we were a bit anxious. In the end we made it through in one piece, I guess the lightning never hits the same spot twice. 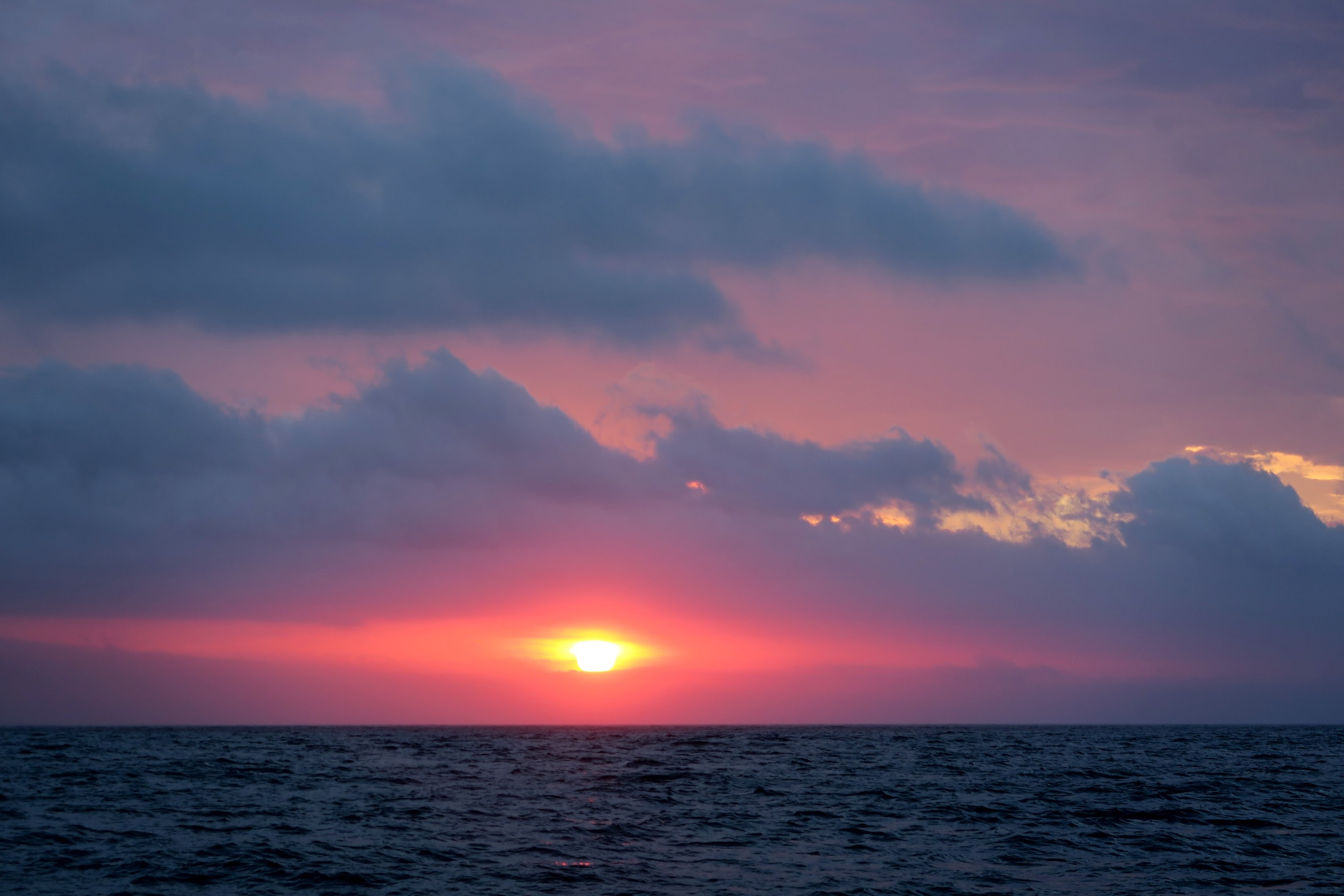 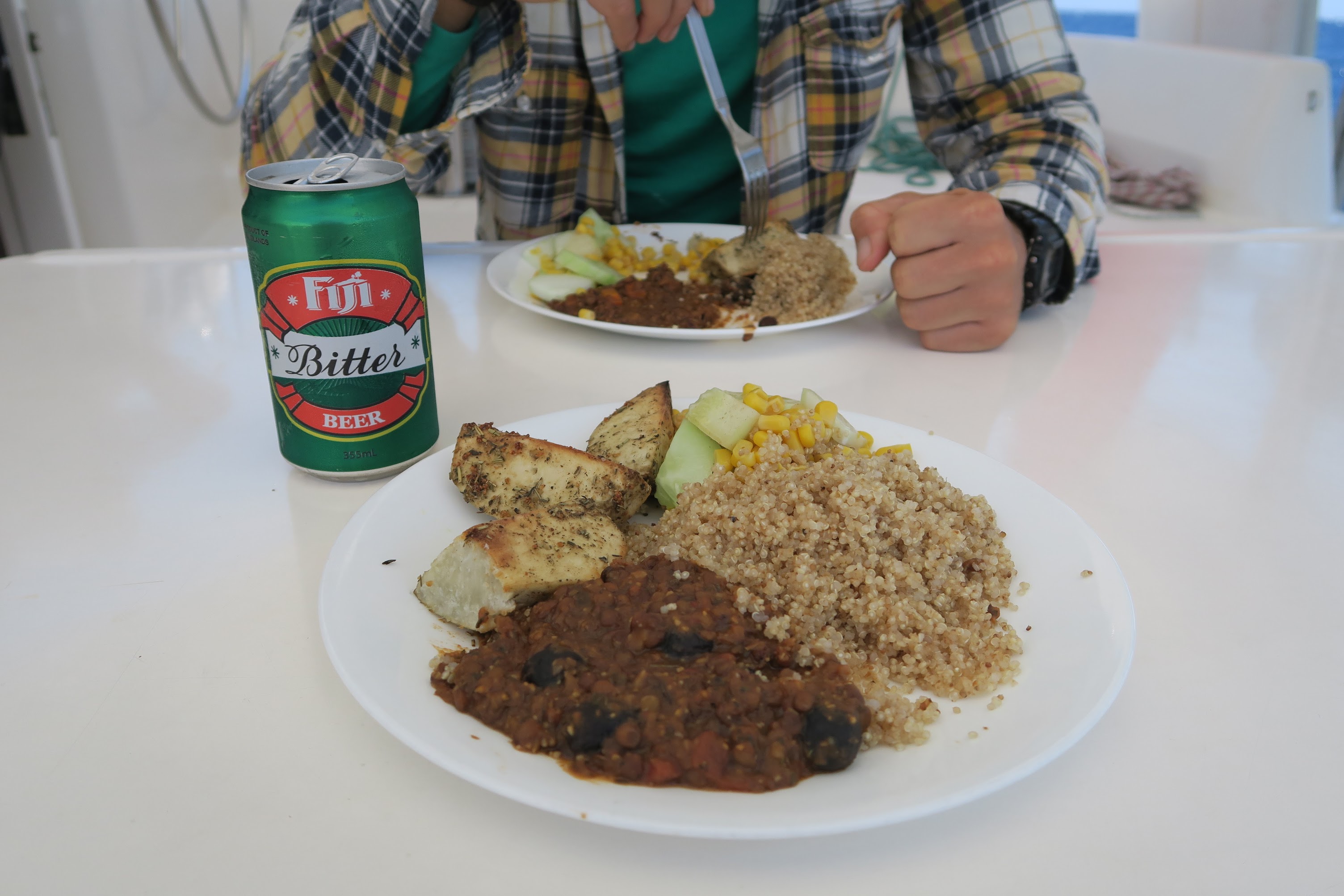 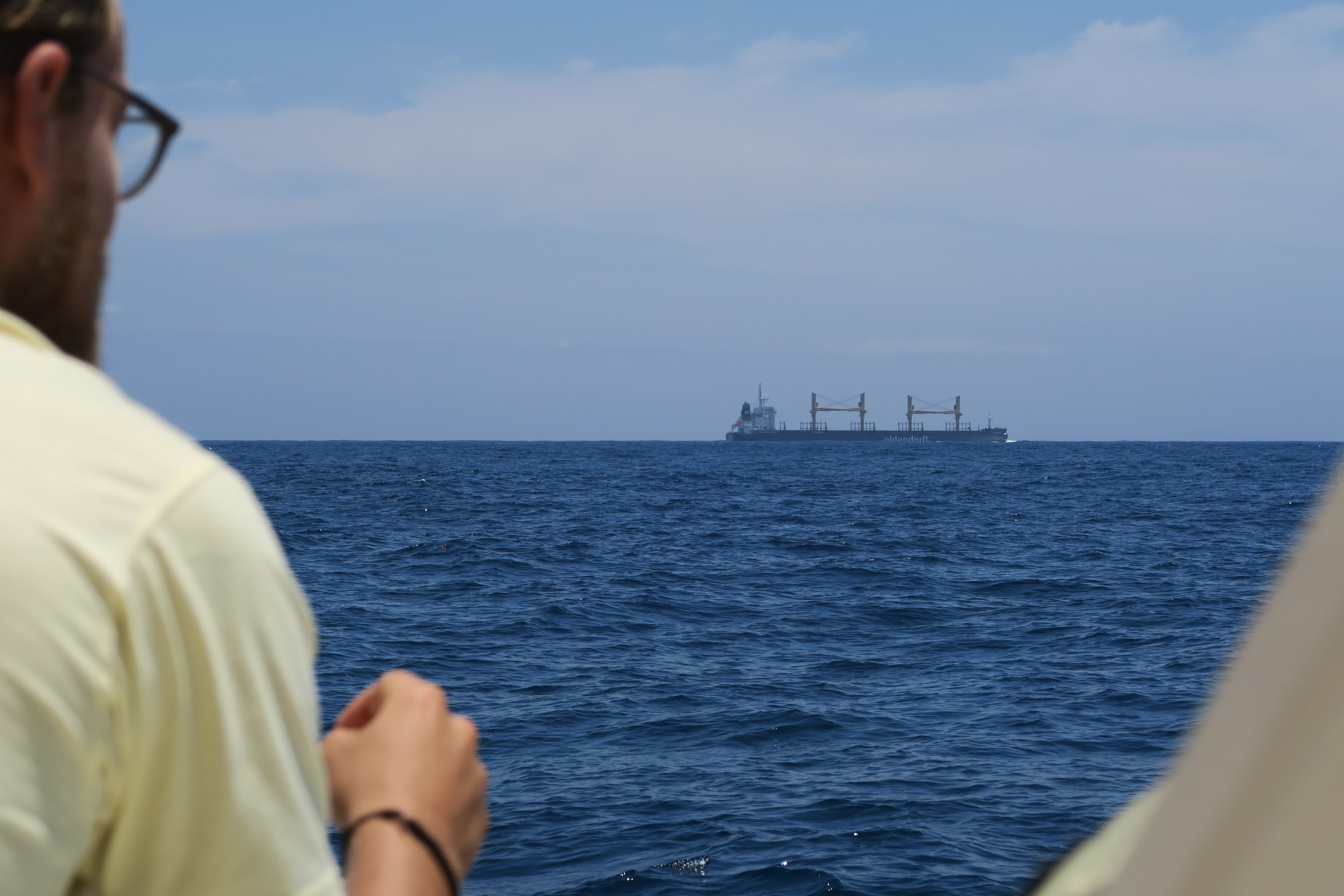 The last day the wind is up and down all the time. 30 knots wind for one hour, three hour later dead calm. Wait two hours and we get a nice 14 knots and set full sails again. The really great thing is that all along we get an extra 3-4 knots from the current! At ten o’clock AM on the 4th December we have only 37 miles to go and decide to try and make it before nightfall. Nice but weak breeze from the east, full sails and an engine running we do nine knots in silky smooth ocean swells as we slip off the current and towards the entrance of Sydney Harbour.