← Panama - Passing Through GUEST POST - Olek on the Galapagos passage →

On the day of our scheduled canal transit, 29th of April, we left Shelter Bay Marina at 14:00 and motored over The Flats anchorage to the area marked by four yellow boys where our advisor was to meet up. He came on board at 16:00 and as we started moving slowly towards the first canal lock we were accompanied by a Jeanneau Sun Odyssey 49 and a HR 32. When we came close the tree boats were nestled together with lines and fenders with Kenobi in the middle pulling the group forward. Very handy to have two engines on our boat, we could steer easily keeping us all in the centre of the lock. The canal line handlers up on ground threw lines with big knots in the end, monkey fists, to our group, attaching to starboard to the SO 49 and to Kenobi on port as the HR 32 there was too small. Lukas and Lucia, our two german line handlers did a great job and we flowed up through the three locks up to Gatun lake. We anchored up in the dark by the two other yachts of the group and took farewell of our friendly advisor Edwin. 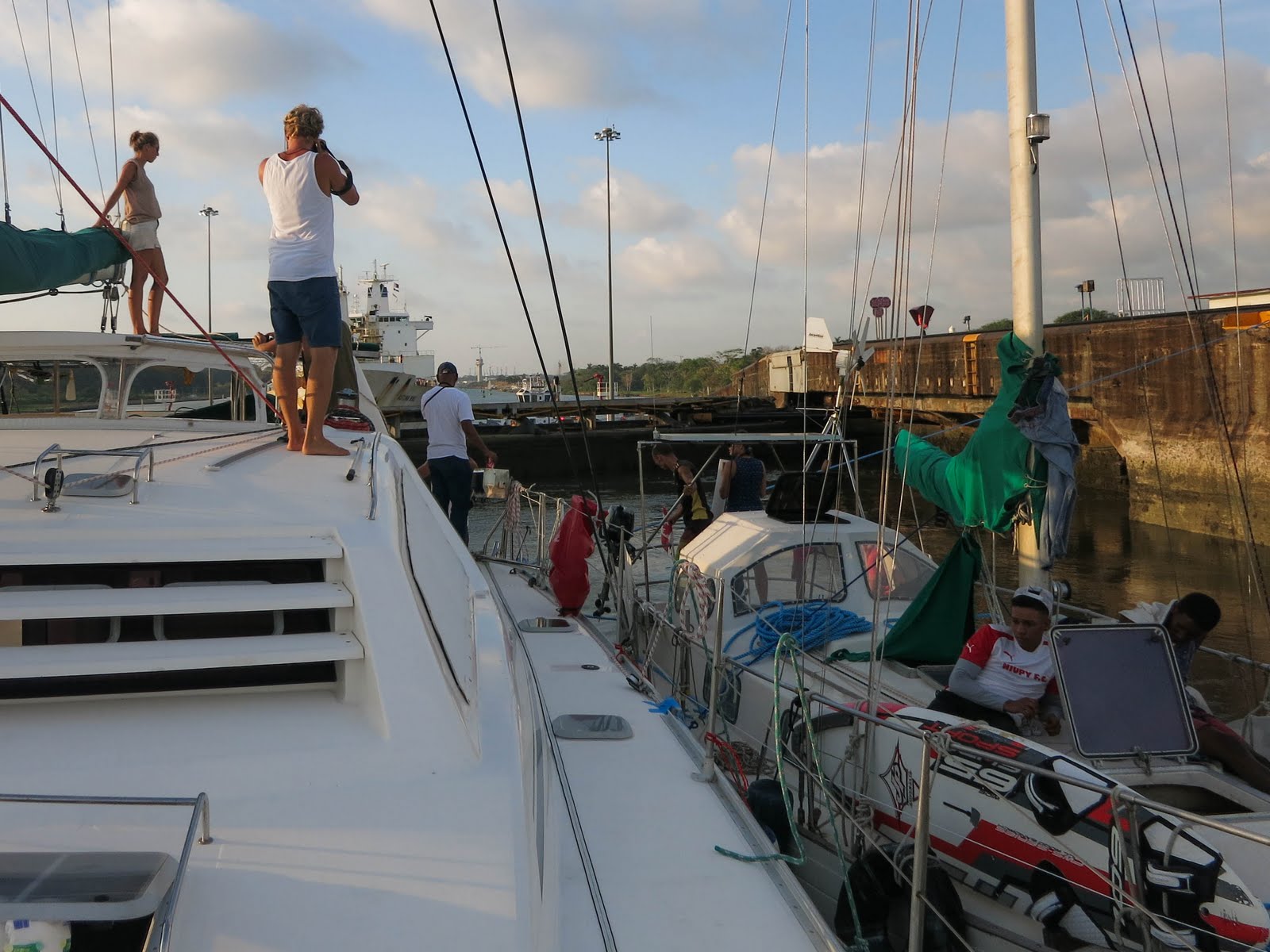 Kenobi and HR32 together inside the first lock 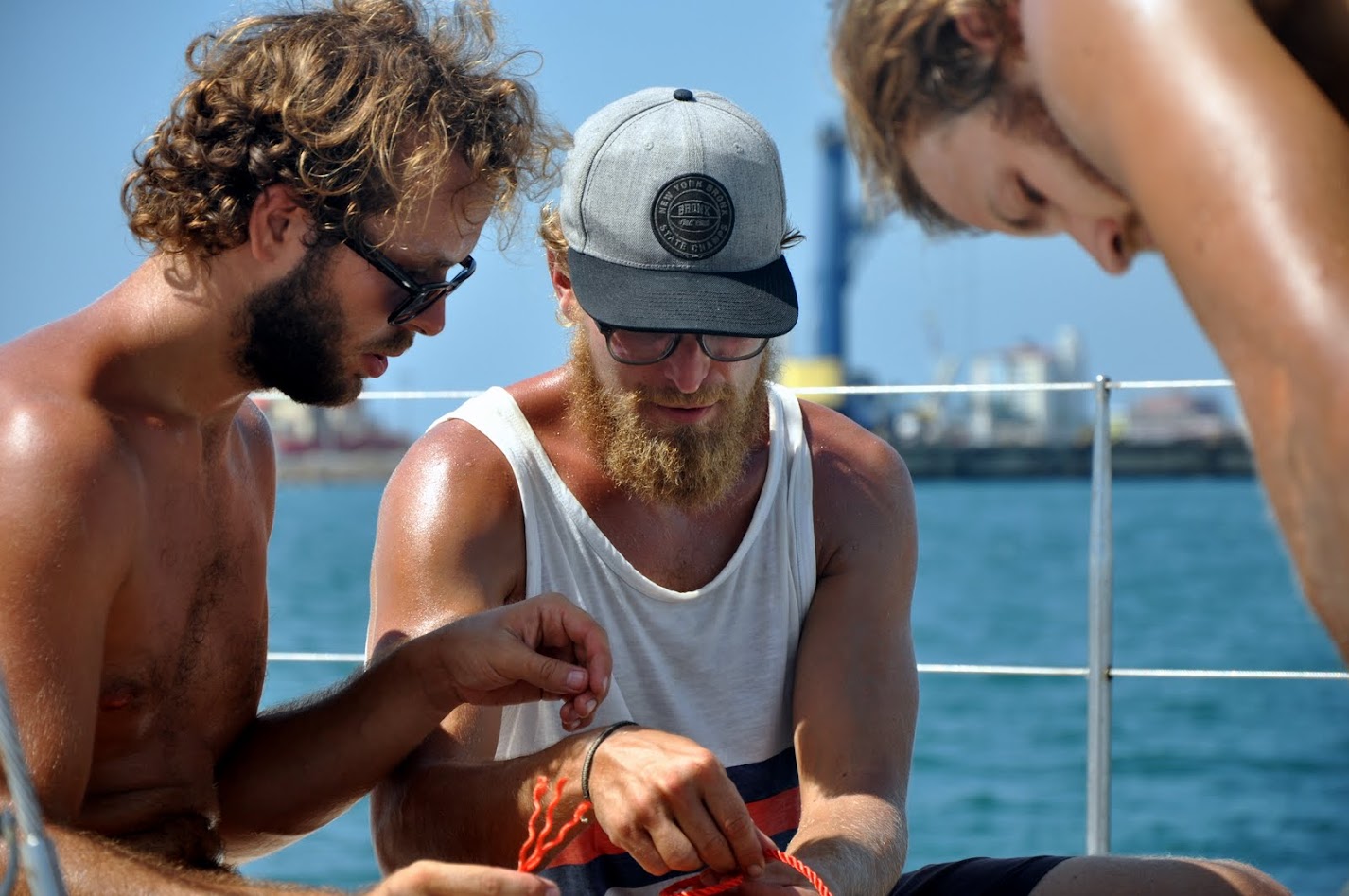 Tying up extra tires on the sides to protect the boat 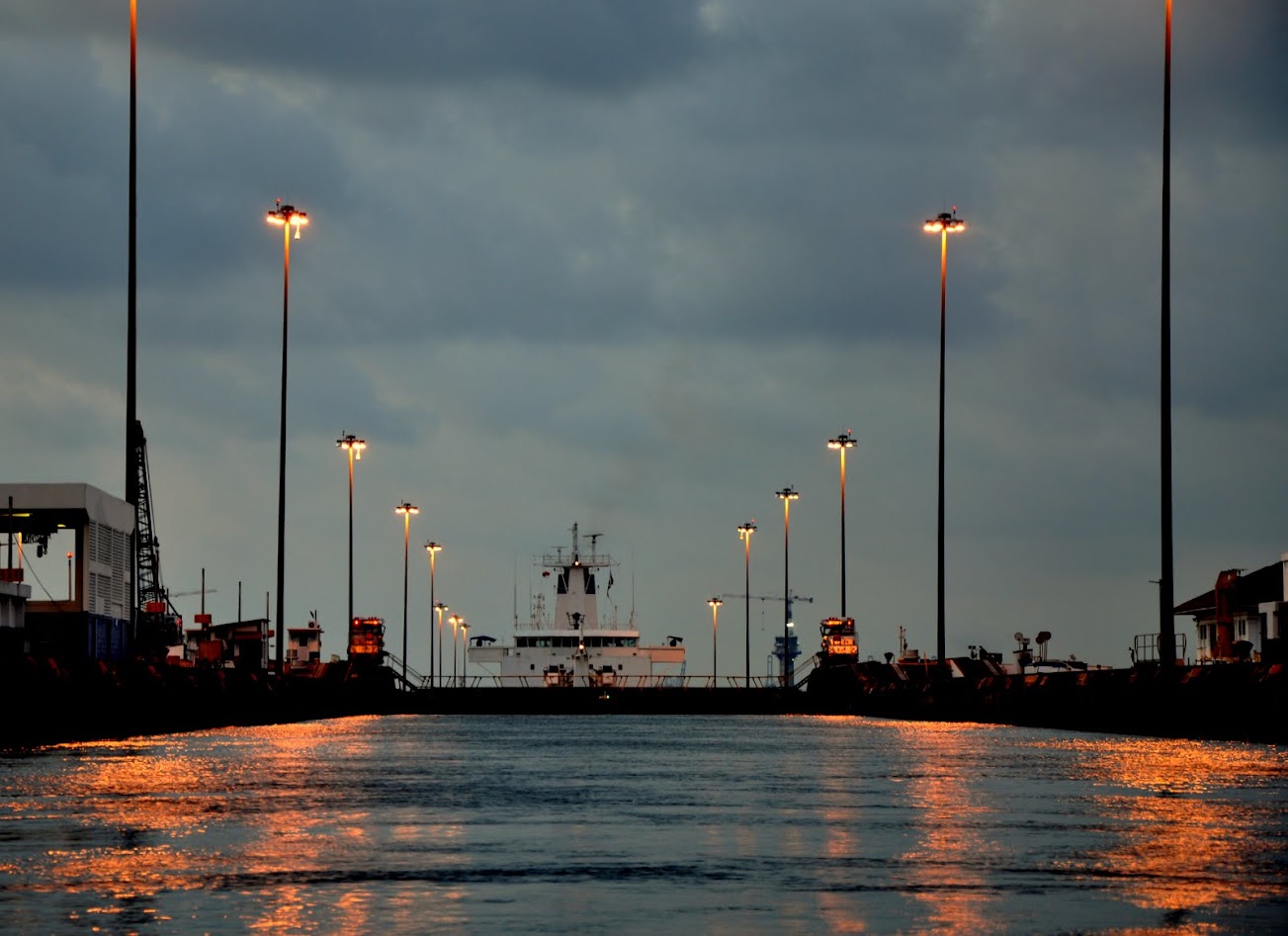 The next morning a new advisor arrived 9 in the morning and we started motoring through the lake and the four hour long canal stretch leading to the Miraflores locks. Our new auto pilot computer did most of the job and we relaxed in the sun, looking out over the lake and following the red and green markers. Occasionally having to have to the side to let larger ships pass by. It’s a funny feeling to be in the same system and doing the same thing an these enormous tankers. We learned that the biggest ships pay $250K to go through - a real privilege that small crafts are let through as well, all thanks to the old Canal Treaty. The locks have two lanes and we had a huge cruise ship next to us in Miraflores where people lined the decks cheering us on as we worked with manoeuvring by engine and controlling the lines on our way down to the Pacific side. Sometimes there would be quite a surge in the locks and a little tricky to stay in the middle but things went pretty smoothly. It was a great feeling when the last lock opened and we were released out into the Pacific. After going under the American Bridge we tried calling Balboa Yacht club on the VHF to see it we could get a mooring buoy and maybe fill up with diesel. No answer, just as inhospitable a place as we had been told. It was just as well though, we decided to speed up and anchored up outside Payitas Mirador Marina just before nightfall. It was a much nicer setting, far out on a small island connected to the mainland by the Causeway road. Very rolly but no big deal for a cat and we could see the Pacific horizon with thunderstorms in the night. After anchoring and a celebratory Balboa beer we gave line handlers Lukas and Lucia a dinghy ride into land and they could continue their South American adventures. For it meant a last couple hectic days of preparing for the passage to Galapagos. And also meeting our new guest on board, my father Olek. 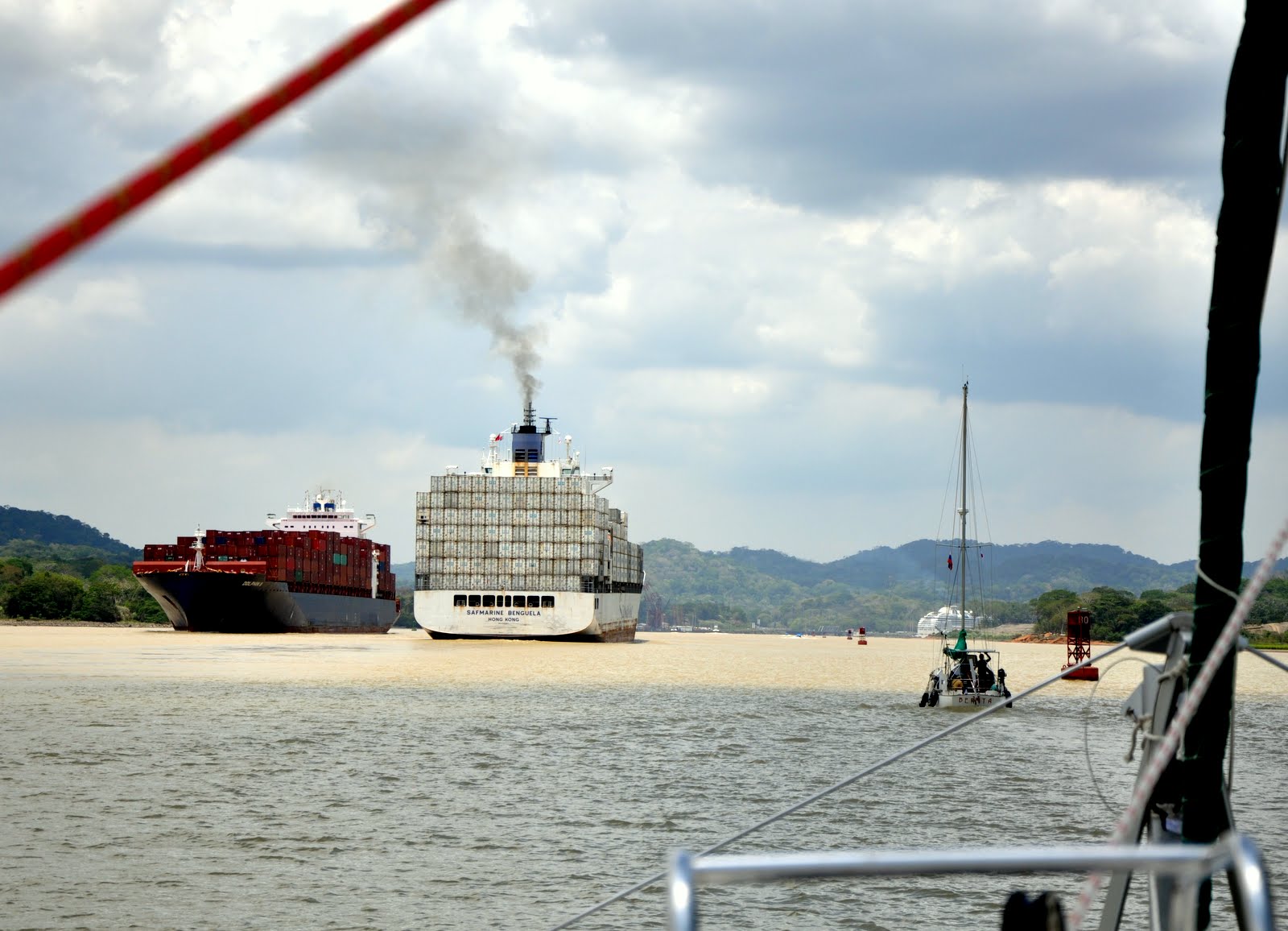 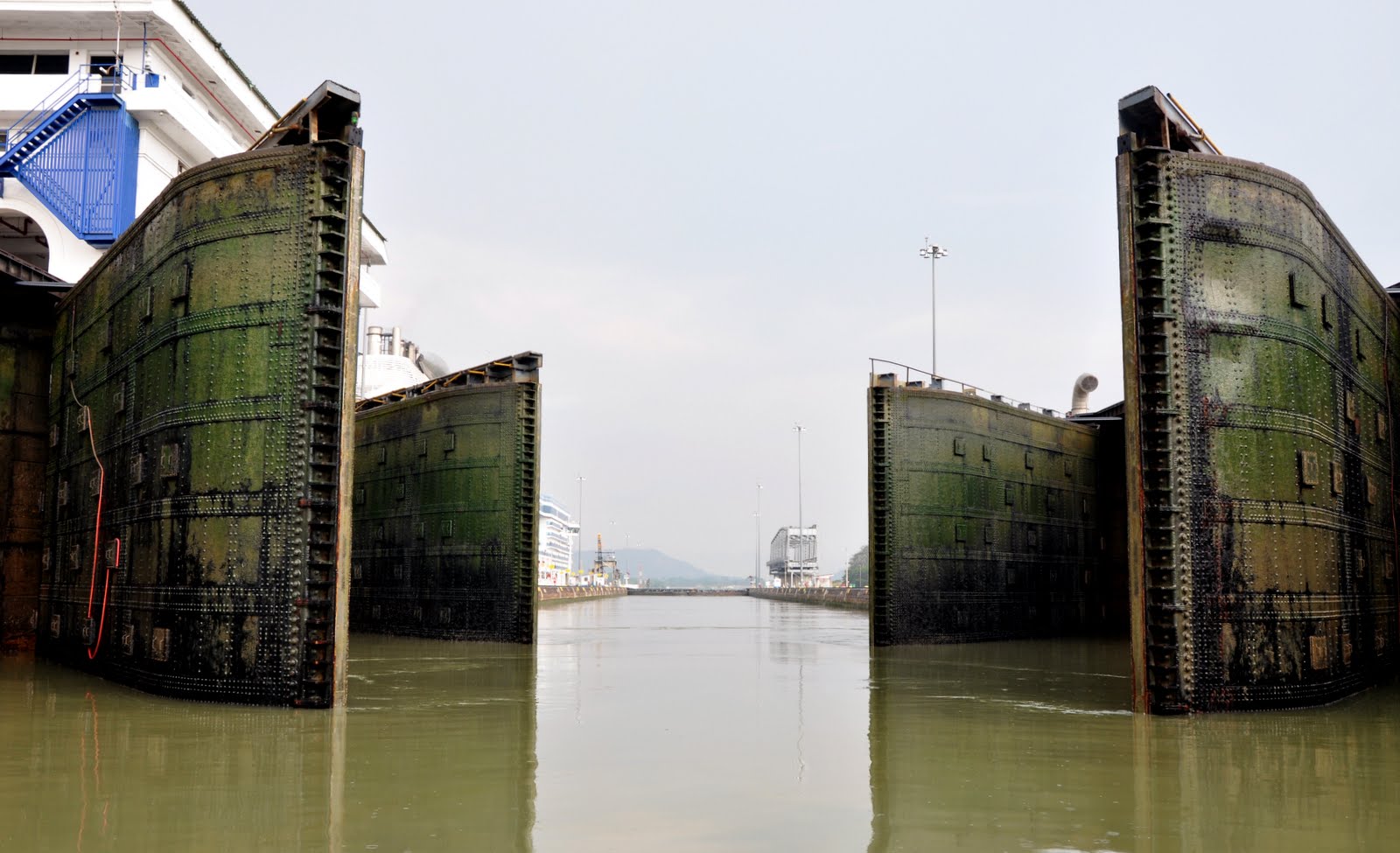