You can easily spend a whole season in the Tuamotus but unfortunately we had to continue westward soon since we had already spent four weeks in this amazing place. Though, we decided to make a final stop at the atoll of Toau before heading towards Tahiti. This atoll is supposed to be the favorite spot in the Tuamotus of the fellow cruisers and authors of the “Tuamotus compendium” (our primary source of cruising information). This gotta be good!

On Toau you can choose to enter the main lagoon or you can go to the north west side of the atoll where there is a place called Anse Amyot. Anse Amyot is at a fake pass which means there is an entrance through the surrounding reef but on the inside, access to the lagoon in cut off by shallow waters. This makes up for a beautiful small lagoon with about 150 meters across with almost 360 degrees’ weather protection. 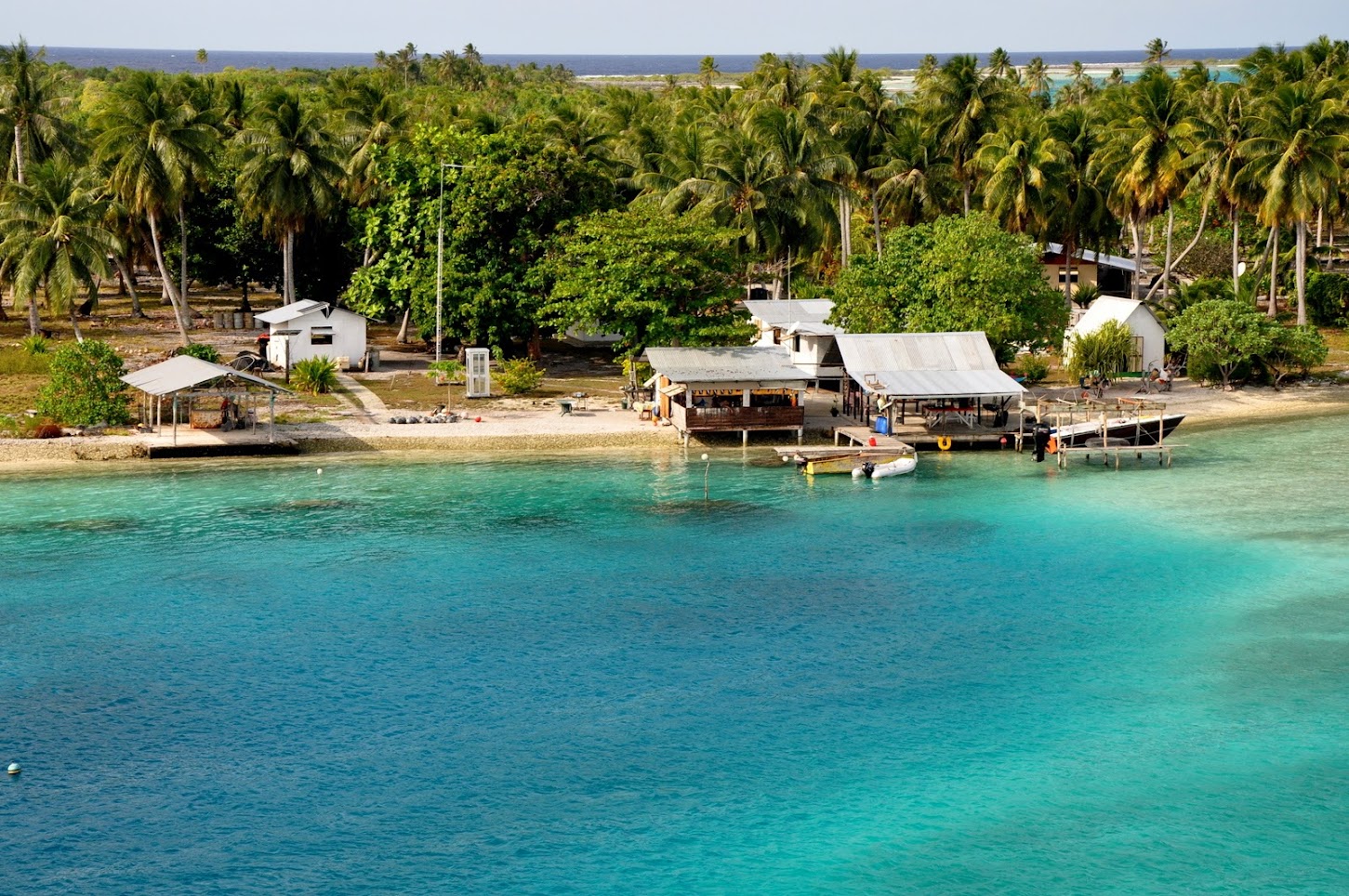 Anse Amyot, the house of Valery and Gaston

We left Fakarava and went out of the big main pass on the north side, measuring a 1M across, to sail the 40 or so miles to the north west. The winds were weak this day so we didn´t make it all the way to anse Amyot as planned, we had to spend the first night in the main lagoon. This was a brief stopover but we went snorkeling and spear fishing, standard procedure when arriving at a new spot in the atolls. As always the sharks were all over the place disturbing our fishing, but by now we have gotten used to them and learnt to stay away from spear gunning a fish when they are too close… 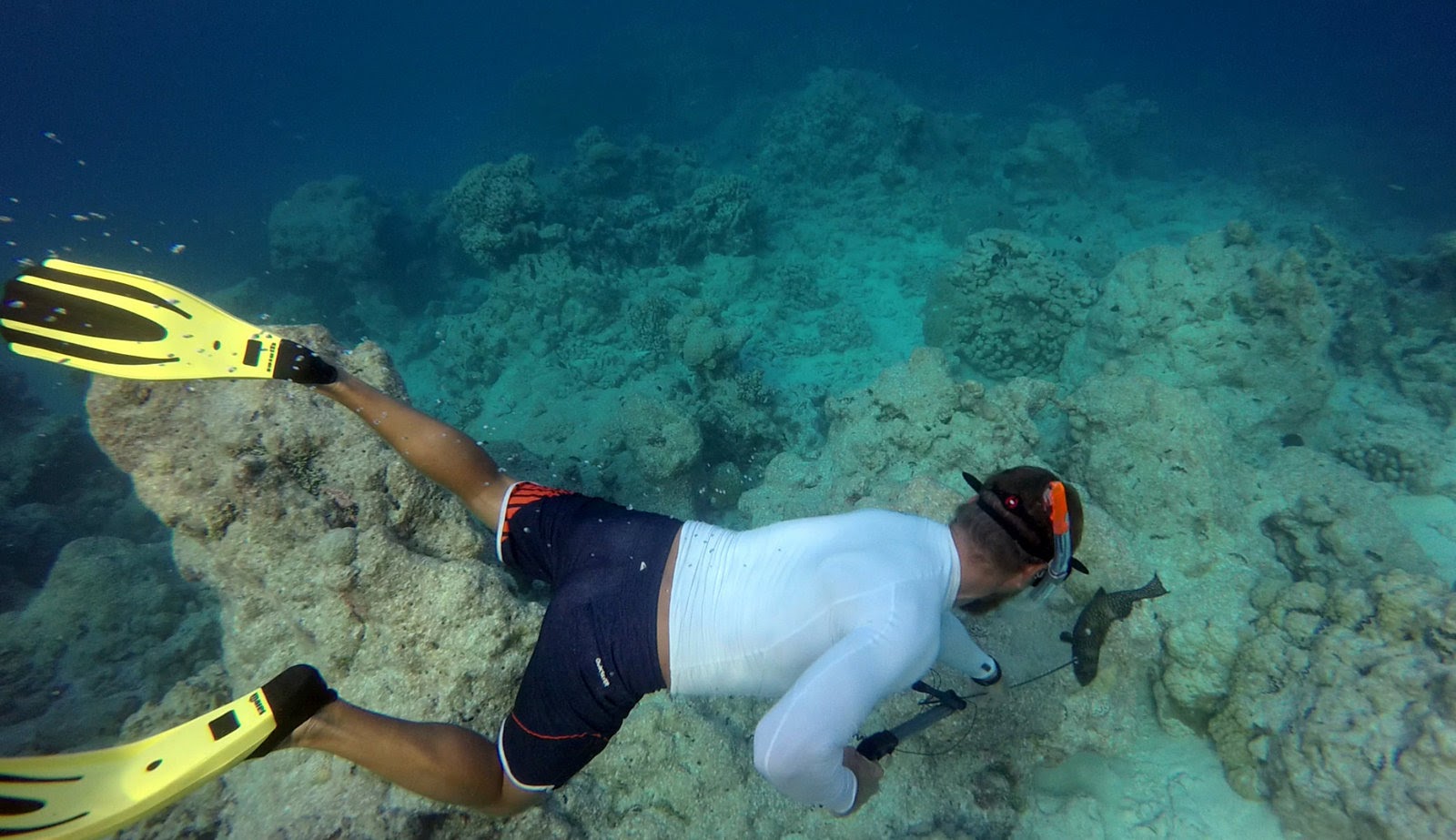 Äntligen! Hampus catching his first fish with a spear gun.

The next morning, we continued to Anse Amyot only a few hours of sailing away. We got here at midday and picked up one of the mooring buoys. You pay 1000 cpf (about $10) a night to the family living on the motu and maintaining the moorings. This really cool family, Valerie and Gaston, who lived here basically all their lives, have set up a great location for cruising sailors to visit with 15 mooring buoys to tie up to and they are happy to welcome you ashore for just hanging around or joining their local feast style dinners. Gaston was about to go hunt for lobster, apparently he can pick 100 kg of lobster in about an hour on a good night, so they invited us to dinner a few nights later. Unfortunately, they experienced an incident in their family during our stay so the dinner was cancelled (of course). Valerie was the only one speaking English and she was definitely a big character, as the leader of the family she was the one showing us around and telling stories about the place. She was always smiling and welcoming the cruisers into their everyday life. This was an amazing place with great scenery and a welcoming host family. If you are here in peak season you will definitely also have a good time with many fellow cruisers. 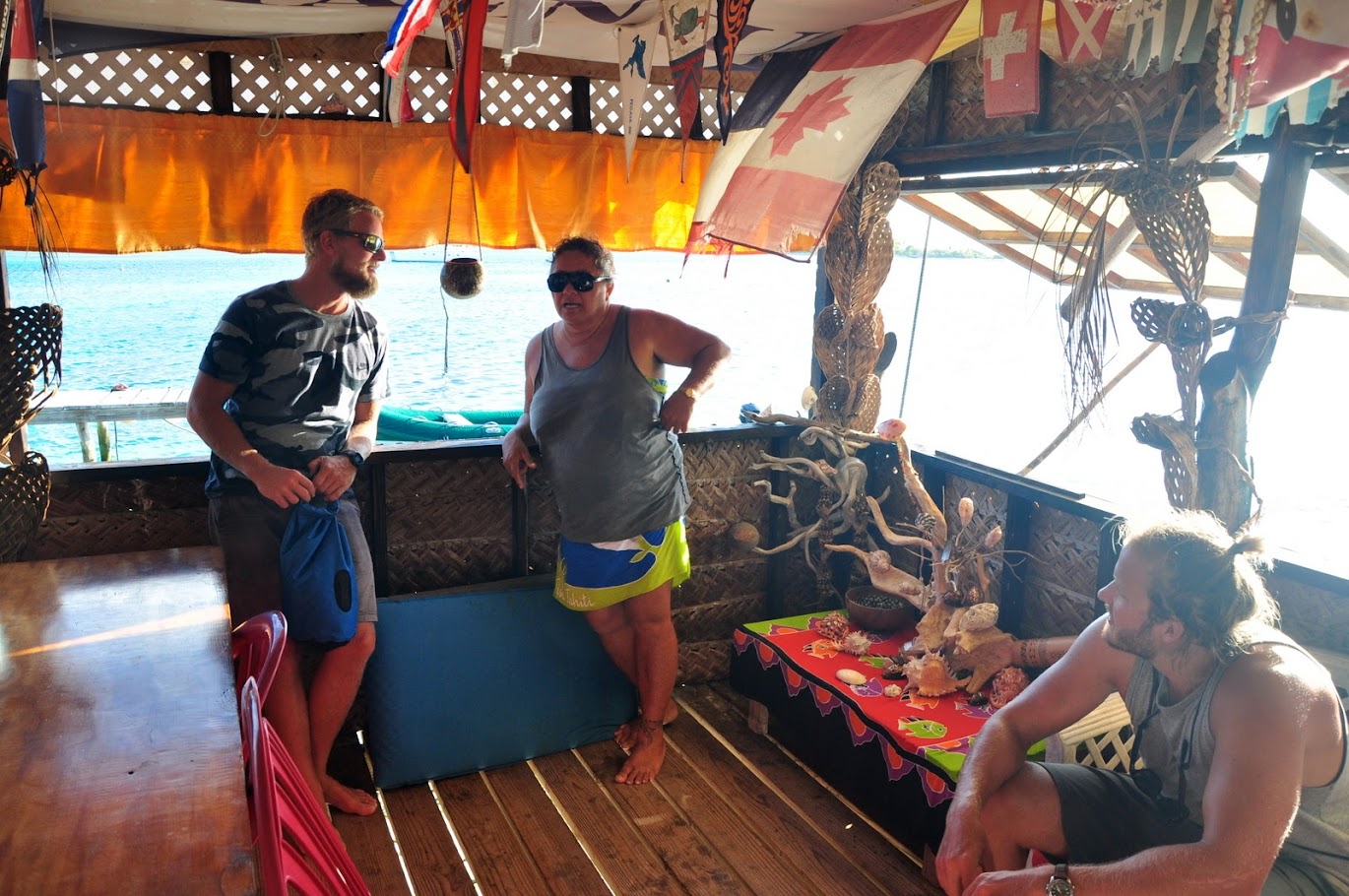 Valery, the boss at Anse Amyot 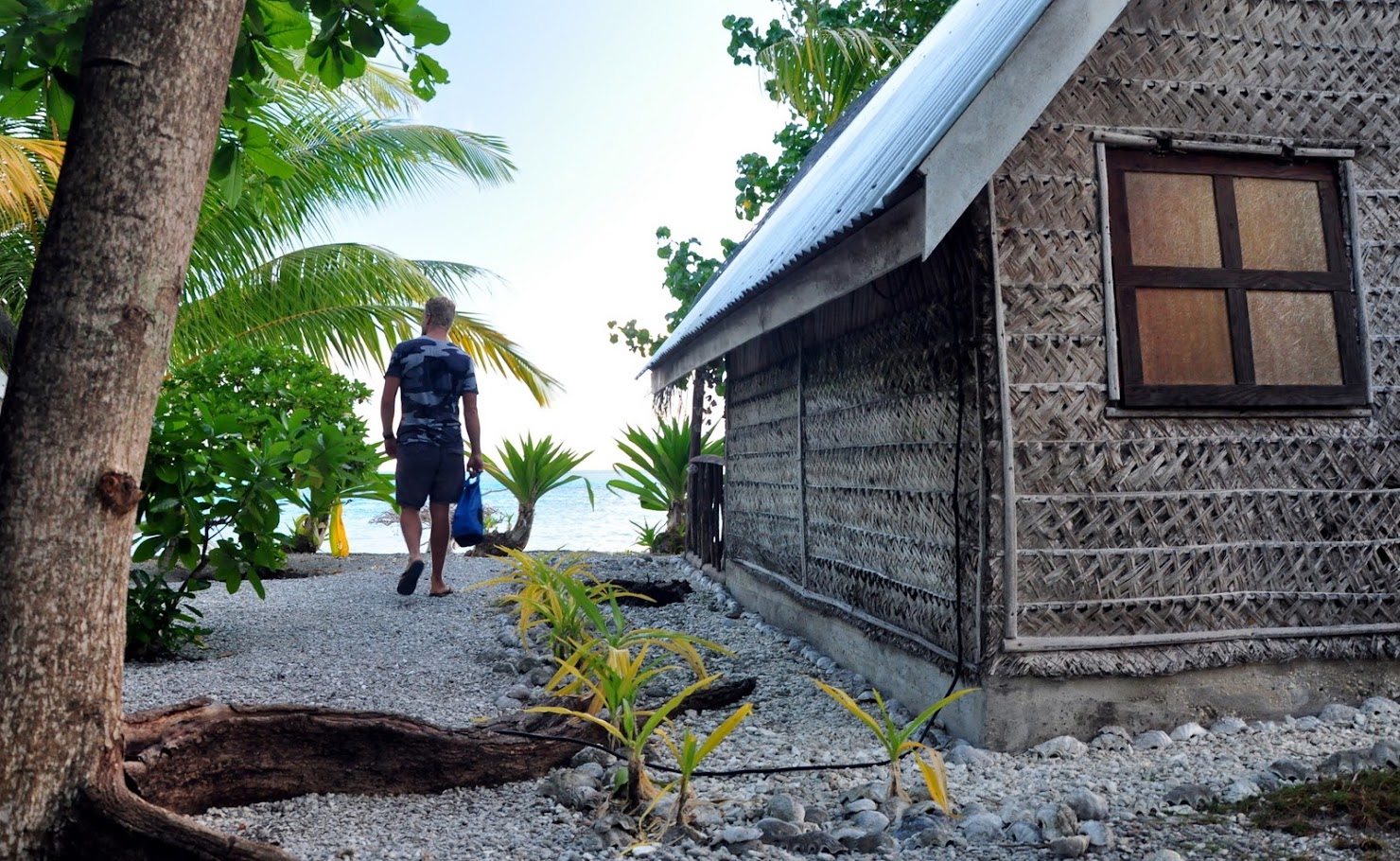 At peak season there can be as many as 20 boats in this small lagoon but now there were only us and two others here. It turned out to be a German family we had met earlier in the Marquesas and a young American couple on the second boat. The main thing to do here is dive and snorkeling in the pass. There is no dive shop so you need your own gear to dive. We went snorkeling a couple of times, the best place was snorkeling outside of the pass where you could see different kinds of pelagic fish and the scenery was dramatic with steep drops in different shapes from the reef plateau down into the deep waters. In the pass there were a lot of colorful coral and a lot of reef fish and sharks to be seen.

On the shallow waters inside the lagoon fish traps were set up. They worked as big narrowing funnel that leads to a trap construction in the end, amazing how many fish that are easily fooled… The family could just go to the trap everyday picking up their dinner. Pretty smart set up. 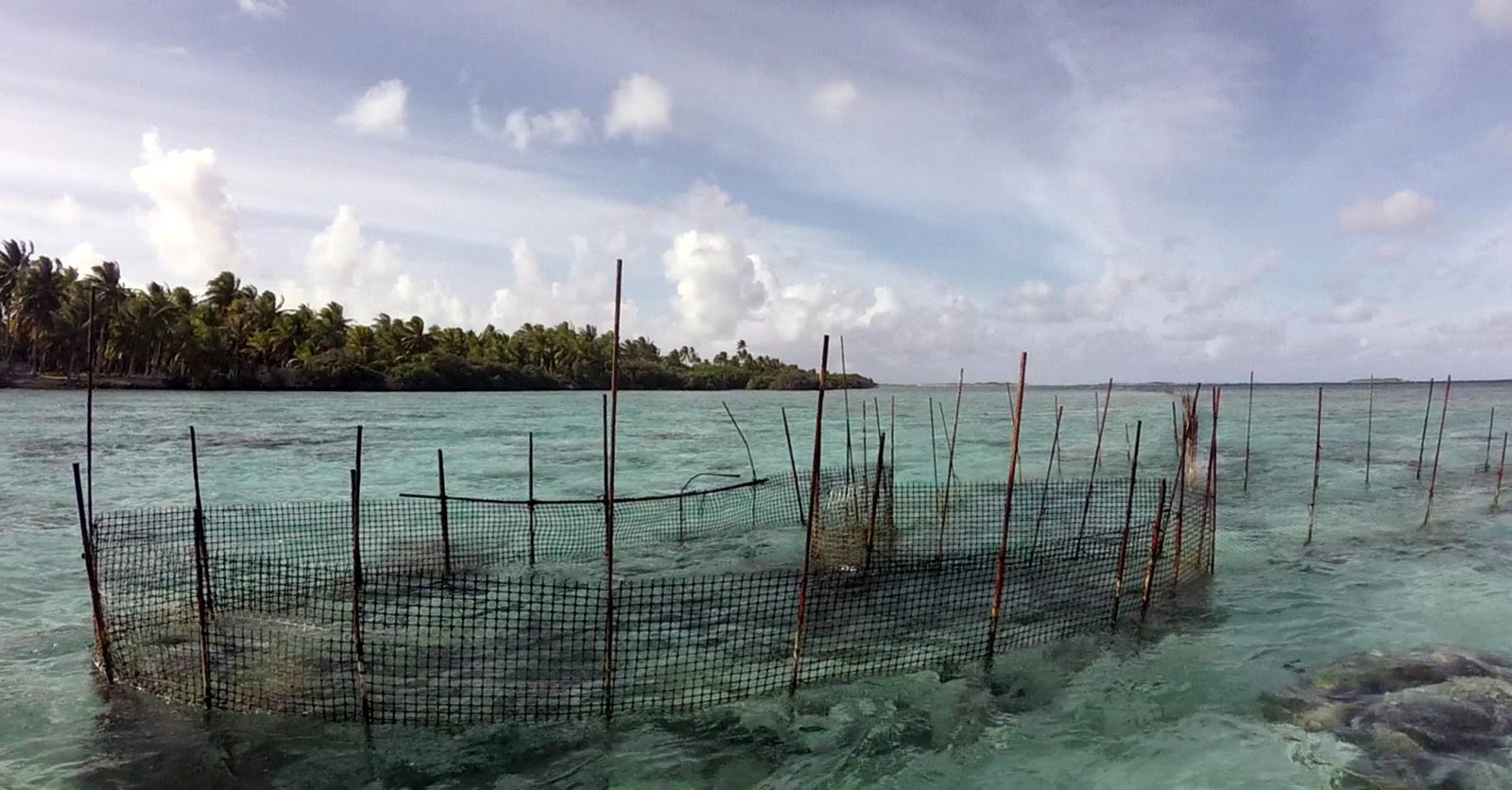 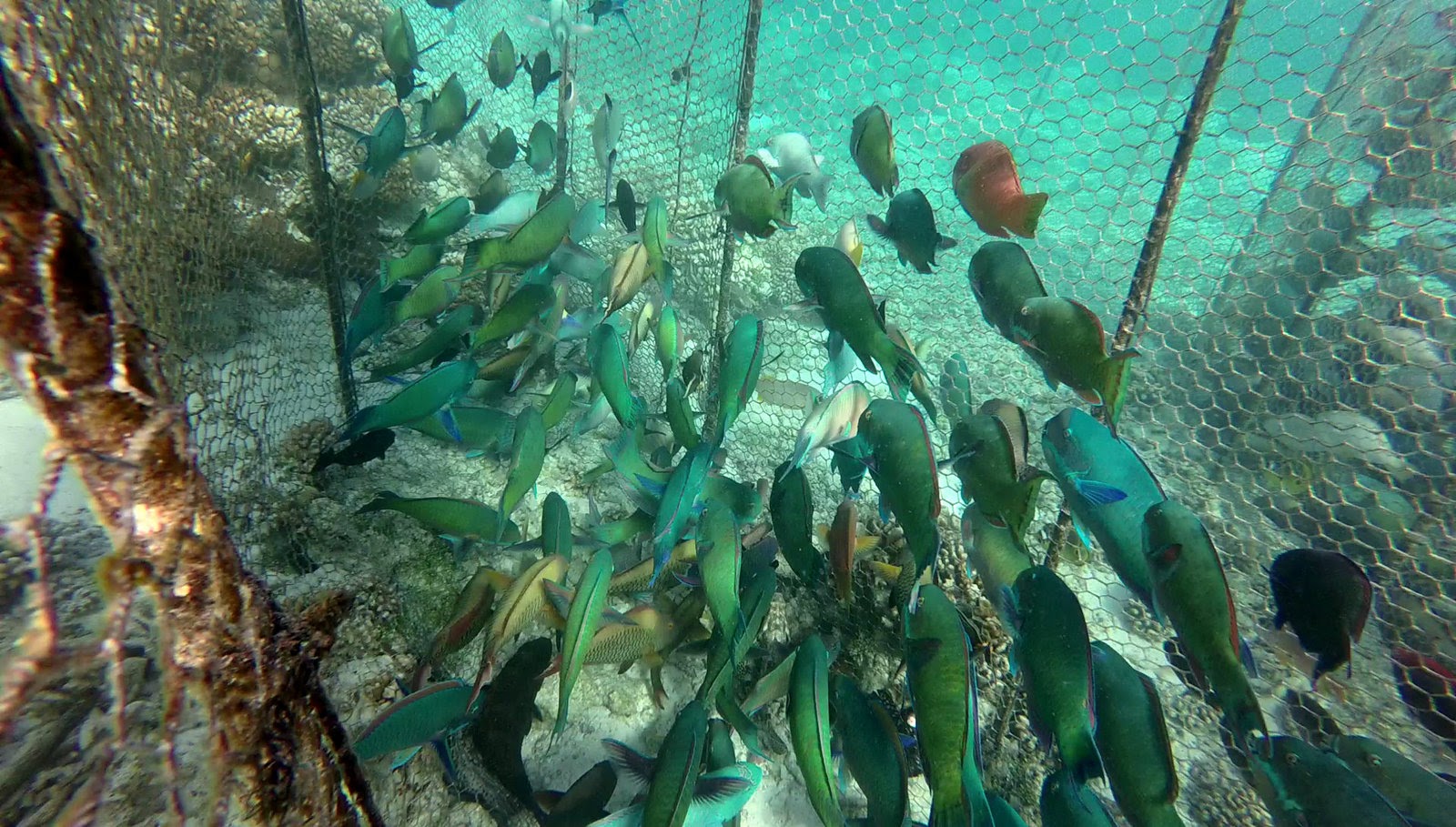 Hmm, which fish do you feel like having today?

Since the dinner here was cancelled we decided to leave Anse Amyot one day earlier than expected. The weather forecast changed and weaker winds predicted, therefor we were in for a two-day sail to Teahupoo in the south island of Tahiti. The plan was to go to there to see the Billabong Pro surf competition but it had been completed earlier during the week because of good swell and waves. We were still hoping for a good hang out with the surfer still around.