Tuamotus passage and preparing for the atolls

The last week spent in Taiohae Bay in Nuku Hiva was focused on getting ready for the atolls of Tuamotus. We had few boat fixes, general maintenance and provisioning to do. A large and difficult task was also researching and deciding which atoll to start off with. We also had a big load of blogging to get done - The Crossing and Marquesas. All this work was hard to get done as it kept being interrupted by hanging out with many nice friends on other boats, awesome car trip around the beautiful island and two very interesting marquesian dance exhibitions - it was the finale of the July fête and the dance competition winners performed.

In the end we only had the last evening ashore to get all blogging done - the worst evening it turned out to be. First, bad idea to sit up late and get stressed with computers and crappy Internet on the last night before a passage (not the first time!!). Also, Sundays are Party Night in Taiohae and our trusty, quiet, free-and-sort-of-working-wifi-cafe at the pier had been made pre-party central. Locals had the grill going and blasted a huge sound system, as every new party-remix of popular songs came at us in a deafening volume the locals were screaming with delight. To be four guys sitting hunched over our laptops a few tables away felt awkward to say the least.

But we got the blog done and five hours sleep later we were on the way. Only thing we hadn’t got done was deciding on where to go. We had a few options for possible atolls and in the end decided not to decide. We’d let the wind decide. Both because it felt nice and free-spirited and all that and also ‘cause we just couldn’t decide. We definitely did not want to miss the promising weather window we had seen in the GRIBs with two days of more moderate winds at 15kn E/E-N-E so staying longer was not an option. First a quick stop back into Daniel’s Bay where Johan and Hampus went ashore to forage some fresh fruits and I went up the mast to remove a faulty (chafing the halyard) and pretty much unnecessary (we think) “twist stop” at the top of the genoa roller. Lunch, rice & beans, and then away in perfect conditions - wind 18kn on a beam reach and we did over 9 knots rolling in moderate waves from the side. Caught two skipjack tunas, 4,2 and 6,2 and the day after a third at 7 kilos. Very big fish as they are usually only 1-3 kg. 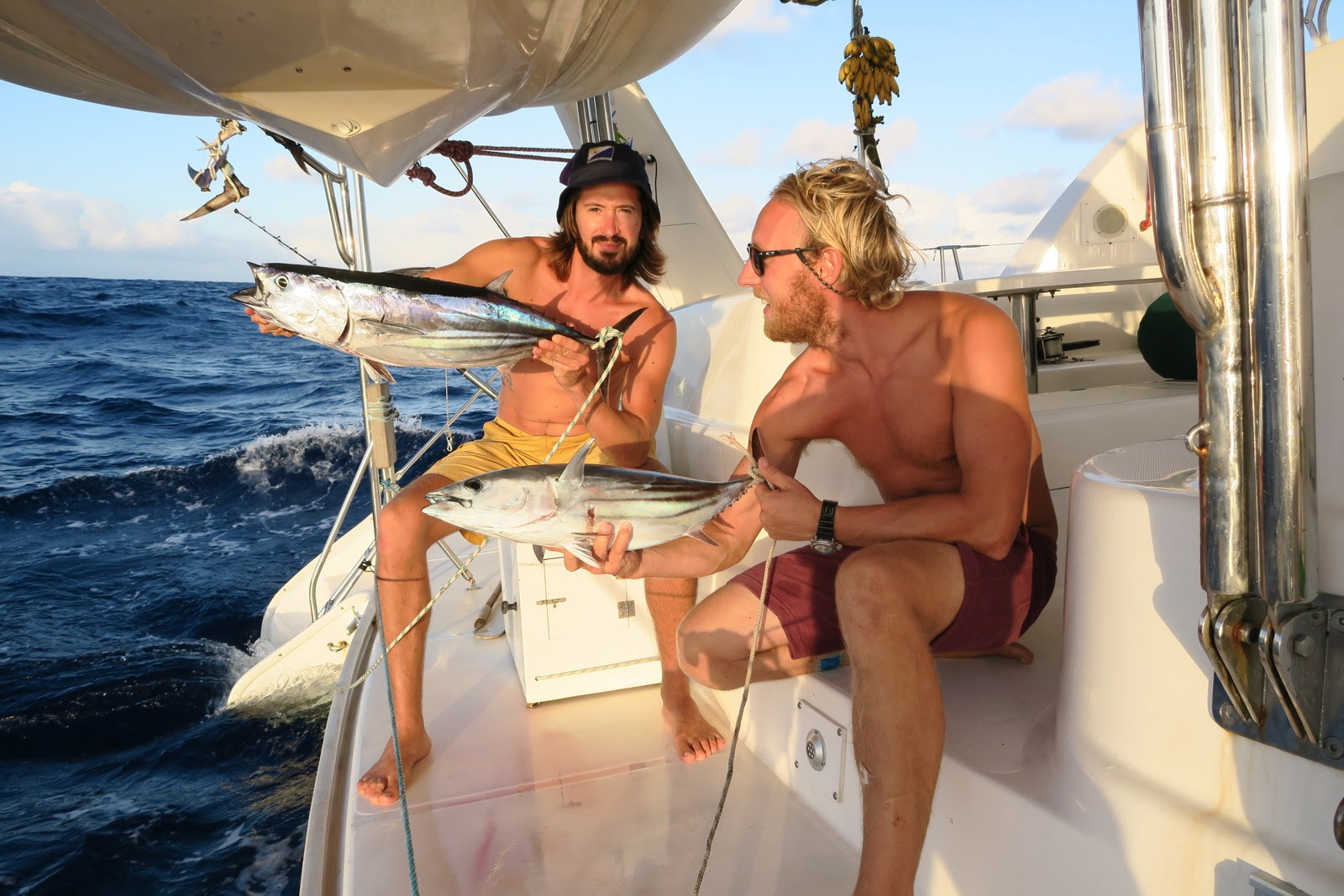 During the passage we all had planned to catch up on cruising info for the Tuamotus area. “The Tuamotus Compendium” by fellow cruisers Soggy Paws being our most valued source of information. The crew of yacht Soggy Paws, together with another yacht back in 2010, have put together an extensive cruiser info PDF that they have continued to update as other cruisers have emailed them their own experiences and discoveries. Home work for the whole crew was especially to read the sections on how tides and currents works in atolls.

An atoll is sunken volcanic island where only the fringing coral reef is left, some parts above sea level (maybe with coconut trees, houses etc) and some parts awash. These coral circles are huge, Fakarava for example is 11M wide and 30M long. Many of them have navigable passes to the inside lagoon and these passes can get strong currents, some atolls up to 8kn with scary stuff like huge standing waves in the middle that can eat your boat. The reason is the tide that fills the lagoon in high tide, creating an incoming current, and that water is then exhaled in low tide creating an outgoing current. Best is to transit the pass in and out the lagoon in the slack tide between the currents. But… the slack is hard to calculate, tide info doesn’t exist for all atolls - you must approximate, also wind and wave conditions affect the current, you also want the sun in your back to see dangerous coral, etc etc. Many factors to get right!

Another great read if you’re heading here is the South Pacific travel letters by Jim and Sue Corenman published in Latitude 38 (Google will find the PDF). Lots of good general info about the area and a very good section about how the weather works here. Because the weather is a big thing here, the prevailing tropical warm and cozy weather with SE trades can suddenly be replaced with strong shifting winds caused by cold wind fronts passing east from New Zealand. Sometimes they peek up a bit to our latitudes and sometimes when they do they case trouble. Specially if you're in a more unsheltered atoll with currents and coral all around you. Yachts do get lost here quite often so we tried our best to absorb all this new information. The article was well written but this turns out to be a pretty confusing subject. Stuff like “…the best indicator of bad weather to come is the presence of particularly nice weather, especially in the presence of a breeze that is backing (shifting north) and getting lighter. The “calm before the storm”, as Mom used to say, but nice weather can also be a sign of nice weather, so don’t be overly paranoid.” Great. One thing I took from it is that most really nasty winds tend to be southerly so always try and be at or close to a protected S anchorage.

Anchoring is another tricky subject in the Tuamotus. Most are deep, 10-20m and almost all in sand with plenty of coral heads scattered around. These corals will make your life miserable if the wind keeps shifting, then your chain that sits on the bottom will wrap around them, getting stuck more and more. If you then get hit by bad weather it can be really dangerous as you’ll have to keep letting out chain so it doesn’t get too short and snap. Also, very hard to get the anchor out, SCUBA gear would have been a nice thing to have aboard… A trick many seem to be doing is to put bouys, like a fender, on the chain to suspend most of it in the water above the coral. We might try that.

Finally, we had to decide where to go! More reading in Soggy Paws guide. It ended up as a tie between Amanu and Raroia. Amanus attraction being mostly that it is a bit “off the beaten track”, a bit south to the flow of yachts going from the Marquesas and Tahiti. It looked like a lovely atoll with a small village hopefully containing nice and friendly people. But, no really good anchorages, at least not covered from all wind angles. Seems more like we’d have to go out and explore with out polarised sunglasses and the sun in the back to avoid coral head dangers and be able to find a sheltered spot, reasonably shallow and with not too many coral heads. This probably would work out fine but it felt a bite uneasy for being our first atoll-encounter. Raroia has some historic significance - it is the landing site of Kon Tiki and Thor Heyerdahls expedition in 1947. Is also has the coordinates of many good anchorages documented, courtesy Soggy Paws, making it feel a lot safer as a first attempt. Also, it is 150M closer - we’d get there faster but, obviously, with less “off the beaten track”-coolness.

So in the end we decided to chicken out and do as Thor and go for Raroia. All this cautionary reading and the Tuamotus having been called “The Dangerous Achipelago” back in the days makes it feel wise to be a bit careful. Raroia seems like a beautiful atoll too and after it we plan to visit Makemo (awesome fishing) and Tahanea (uninhabited, nature reserve) before doing some epic shark dives in Fakarava. If we have time we do some more to the north but the plan is to be in Tahiti in end of August, to get going with repairs and to see the Billabong surf competition. 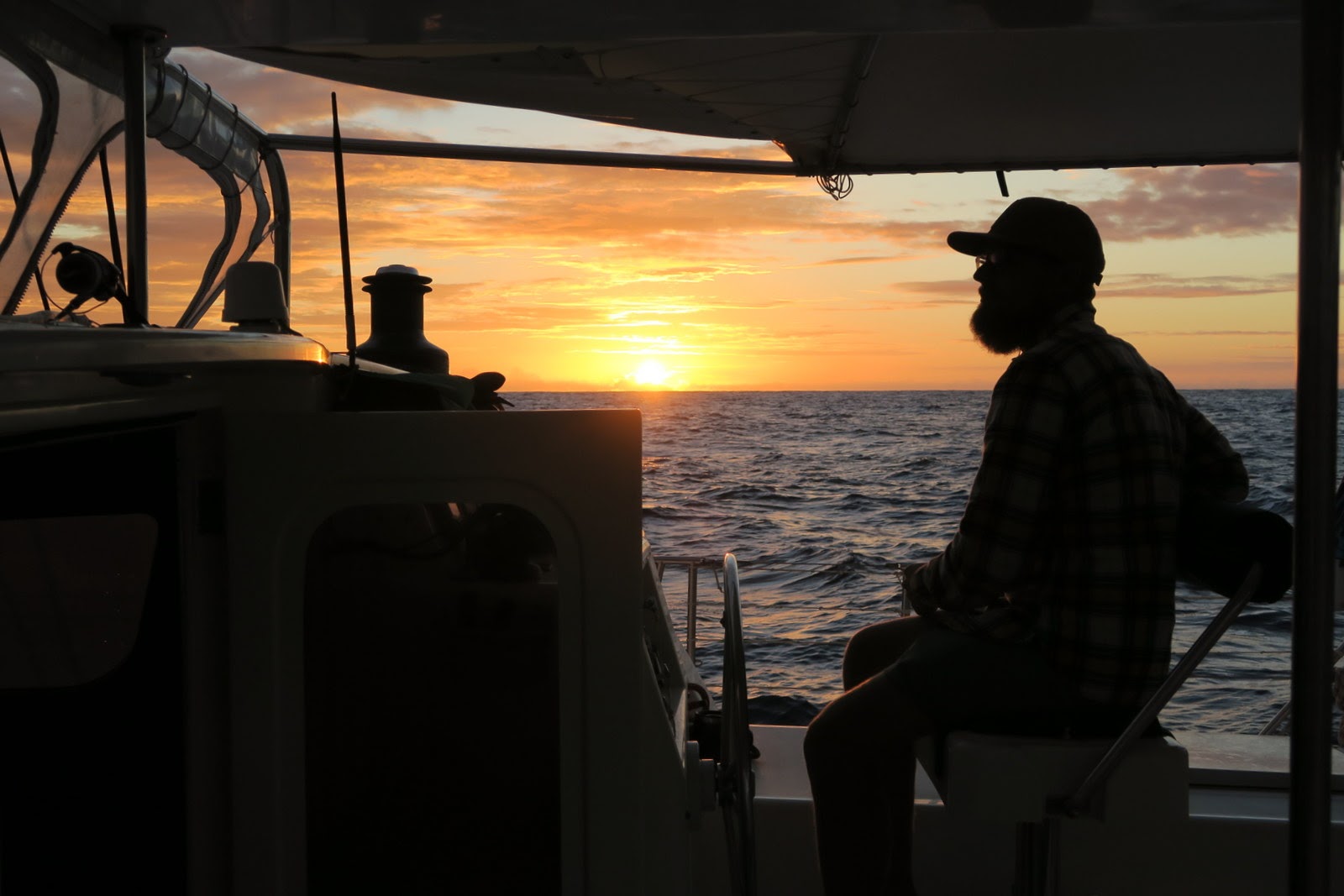 It’s now 19:30 on the 3rd of august, day 3 of the passage and 89M to go. We need to arrive tomorrow at 12ish o’clock PM to hit the slack tide. That means we cannot go slower than 5.5 kn. The wind died completely in the afternoon so now we are motoring, both engines fast speed. Hopefully we’ll be there a bit early and have time to inspect the current for a while from the outside and pick a good moment to go. See you inside Raroia lagoon!